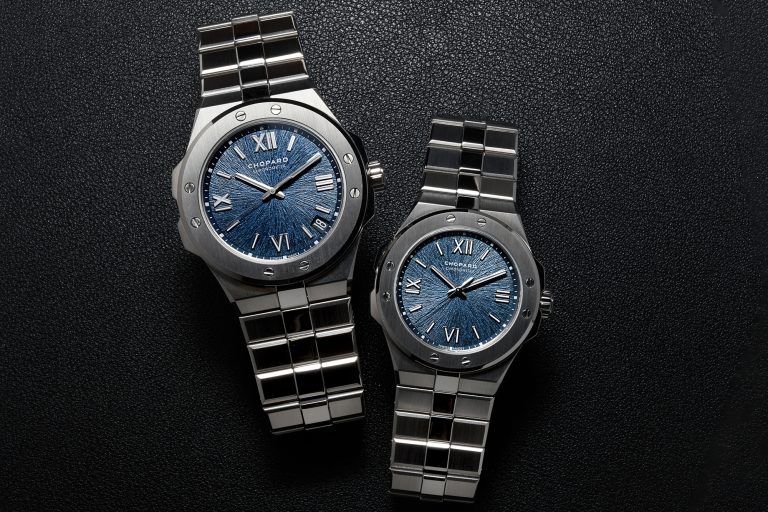 An updated version of the “St Moritz”, a watch with an integrated bracelet that was made in 1980, now called the “Alpine Eagle”.

Quite a few brands have released watches on integrated bracelets of late and it’s certainly a welcome trend. I’ve always been partial to such watches due to the utility that they provide to the wearer, being easy to take on and off, and also being impervious to water, compared to leather straps. Overall, they are more convenient to wear on a daily basis, and also, if designed well, can give the watch a distinctive look, and a possibility towards iconic status in the future.

Of course, there are quite a few brands with such watches already, and any entrant to this space has to come in strong in order to distinguish itself from existing players.

Chopard has certainly brought their “A” game with the new Alpine Eagle collection as they are watches that look and feel good in the hand and on the wrist. Not only that, they bring their own aesthetic touches to a genre in which it might seem difficult to differentiate oneself. In any case, the result is unique, elegant and very attractive. 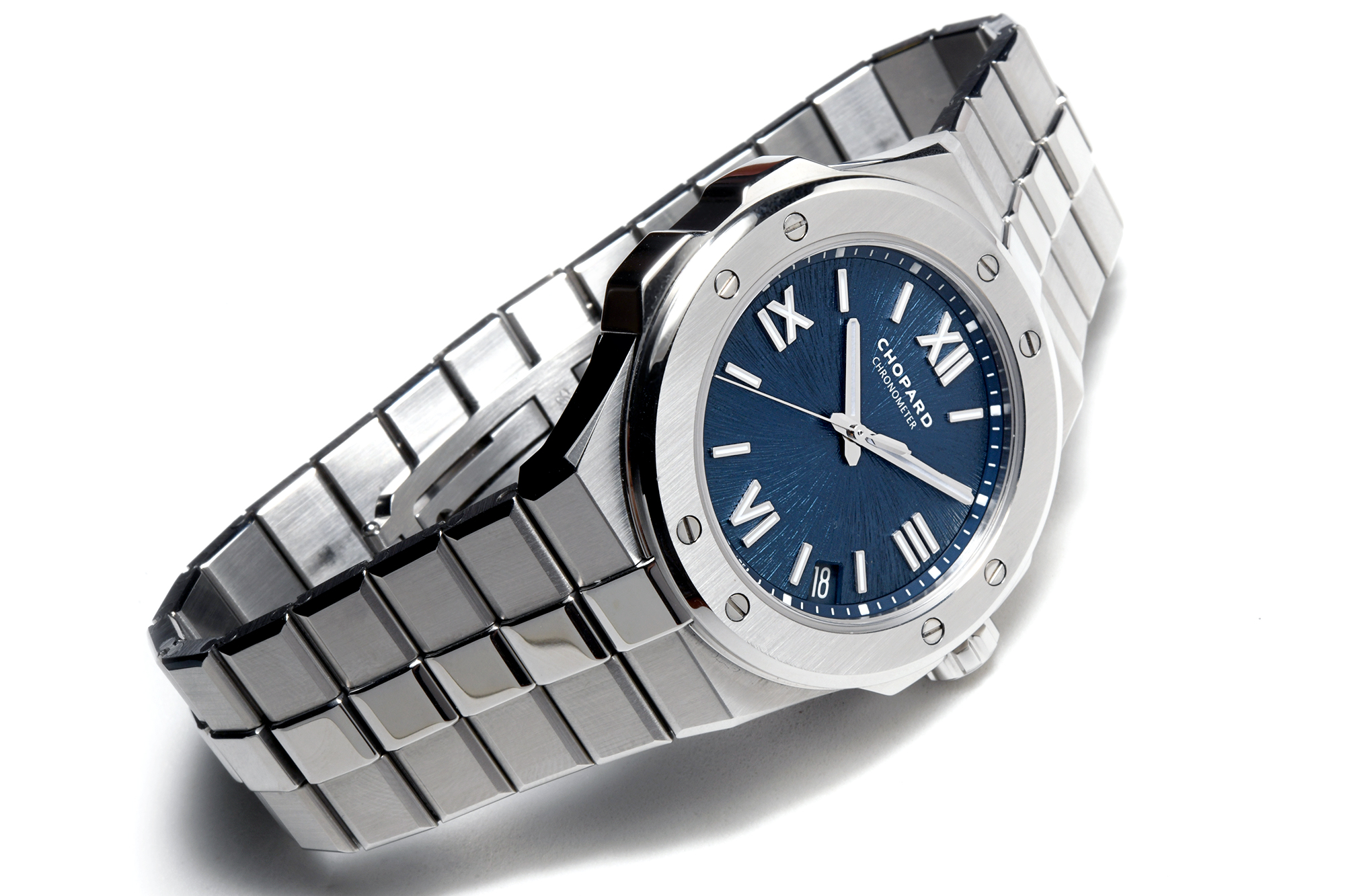 Two sizes are available at launch, 41mm and 36mm, and the initial collection is a full one, coming with a range of material options, from stainless steel to two tone and even full gold with diamonds.

Inspiration from the past

The original St Moritz, the inspiration behind the new Alpine Eagle was current Chopard co-president Karl-Friedrich Scheufele’s maiden watch project at the age of 22 when he first started working for the company. At the time, he envisioned the creation of a stainless steel watch with an integrated bracelet, and it took quite a bit of effort to convince his father Karl Scheufele to agree to it, since the company dealt mainly with precious metal watches and jewelry at the time.

Named “St Moritz”, after the alpine luxury ski resort in Switzerland, it was envisioned as a sports watch, as shown in the advertising visuals, with skiing and golf being the sort of activities that one would partake in while wearing a watch like this.

This was a collection that was extremely successful for Chopard, as it was sold continuously all the way until 1995. Not only that, it marked a roaring start for the young Scheufele in his fledgling watch career, as he would go on to revive the historical Mille Miglia race and the associated racing watch line, as well as to begin the ascendancy of the L.U.C. line of high horology watches, to bring the maison back to its original roots in pure watchmaking.

So what about the Alpine Eagle that launches this year in 2019? Well, it’s a little bit of history repeating itself in this case. This time, it was the son of Karl-Friedrich Scheufele, Karl-Fritz who wanted to give a proper tribute to the work of his father, by coming up with the idea for the new Alpine Eagle, in his own maiden watch project. As history has shown already, that just might be the start of something new and special for the next generation of this family owned maison.

While it would have been nice for the new collection to bear the “St. Moritz” name, as it did in the past, it was, for various reasons, not possible. In the end, the name of “Alpine Eagle” was chosen. This was partly due to the Scheufele’s family involvement since the early 2000s with the Alp Action program, whose mandate is to help integrate environmental considerations into its partners’ Corporate Culture.

With Chopard being no stranger to robust initiatives such as these, already seen in the brand’s exclusive use of Fairmined gold, the new collection thus aims to create awareness of the importance of conserving the natural environment, by naming it after the Apex predator of the Alps, the Alpine Eagle.

The Alpine Eagle takes much of its look from the original “St Moritz”, with the most obvious difference being found in the bezel that is now decidedly round. The St Moritz had a round bezel as well, but the eight screws in the bezel, grouped in pairs at the cardinal points, protruded slightly from the circle to give the bezel a unique shape. These screws in the new Alpine Eagle, incidentally functional ones as well that help secure the case for its 100 meter water resistance, are now within the round of the bezel. 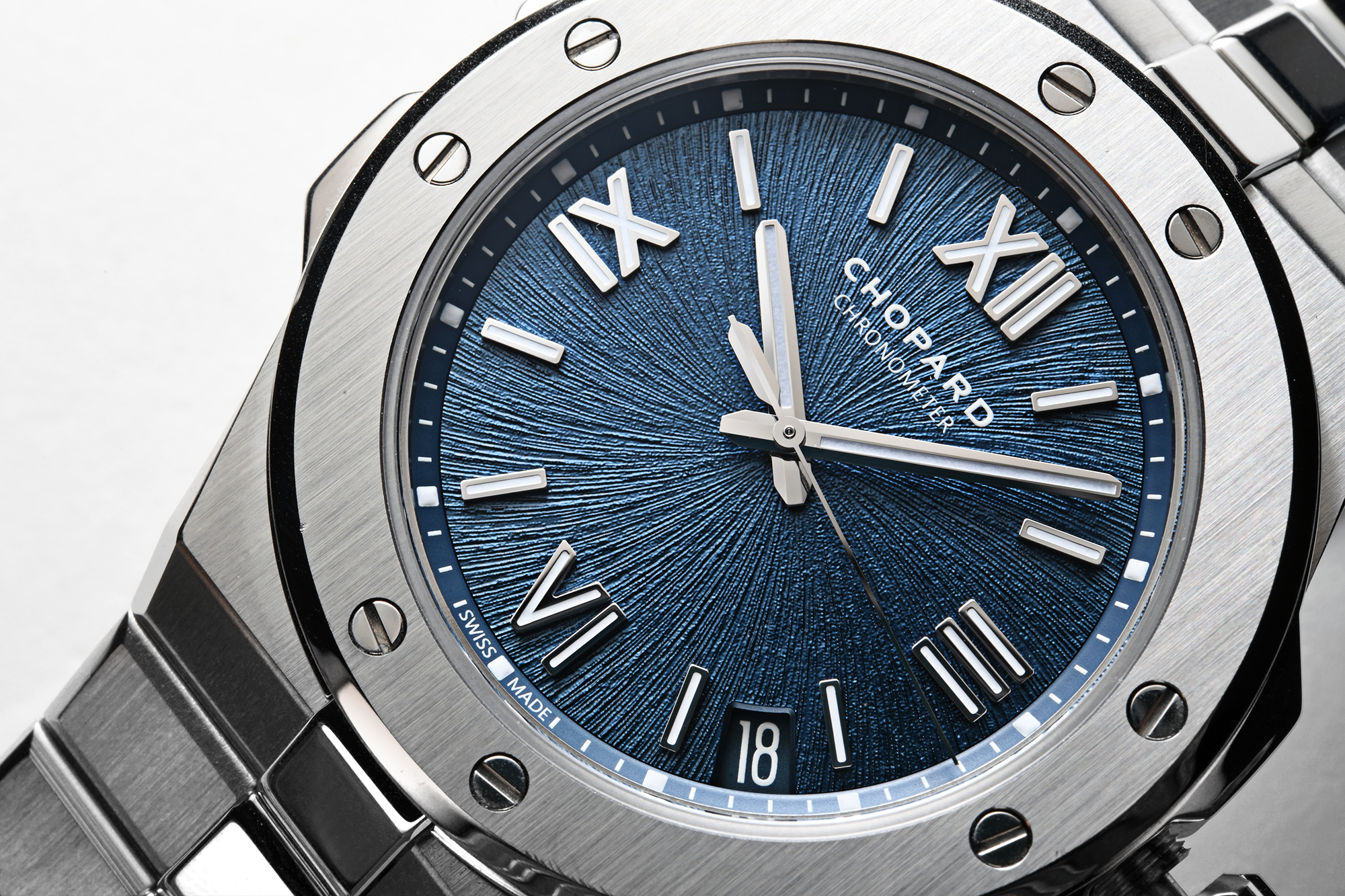 The case however retains an echo of the older bezel however, in the form of the “ears” that are mirrored on the left and right side. As a nod to functionality, the “ears” on the right are now crown guards. Certainly, this is the most impressive detail of the watch, combining an element from the past with modern considerations of performance.

The bracelet is also another unique highlight, with a form unlike any other bracelet I have seen before. This design, also seen on the St Moritz has now been beefed up for the larger modern size of the Alpine Eagle, with ingot shaped links topped by a polished central cap. Unique as well is how the bracelet is put together. Unlike almost every other bracelet, the screws that hold it together are found on the underside of the links, instead of at the edges. What this means is that on the wrist, no screws are visible, a detail that adds to the overall elegance of the watch. 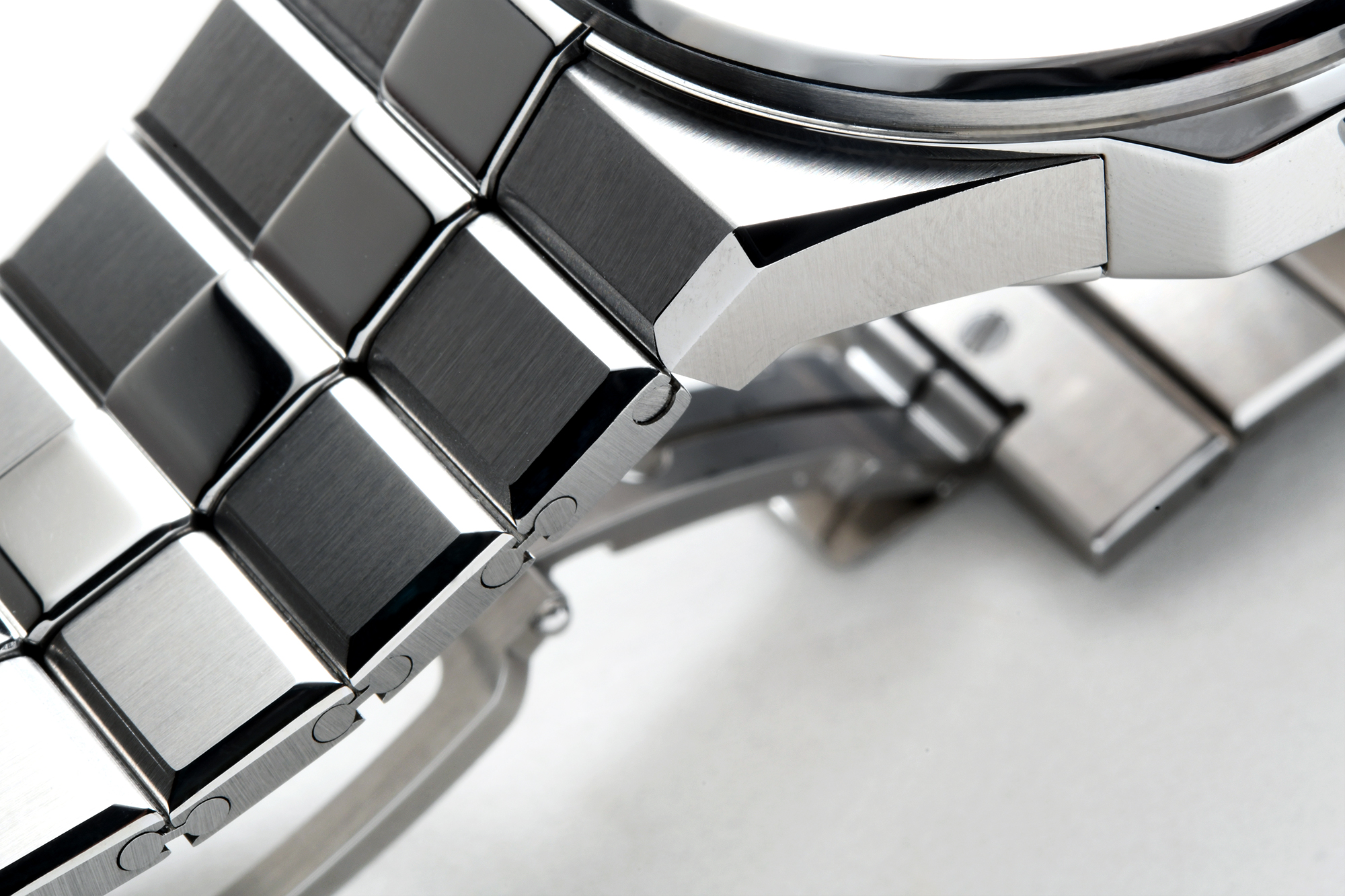 From the St Moritz, the Alpine Eagle retains the roman numerals that were part of its dial at the 12, 3, 6 and 9 o’clock positions, however these have been infused with Super luminova grade x1 for night time legibility, which in a way accords well with the namesake inspiration of the watch, the Alpine Eagle. Most obviously in reference to this, is the striking dial texture, which departs from the classically oriented presentation of the St Moritz, to now recall in a striking fashion, the texture of an eagle’s iris. 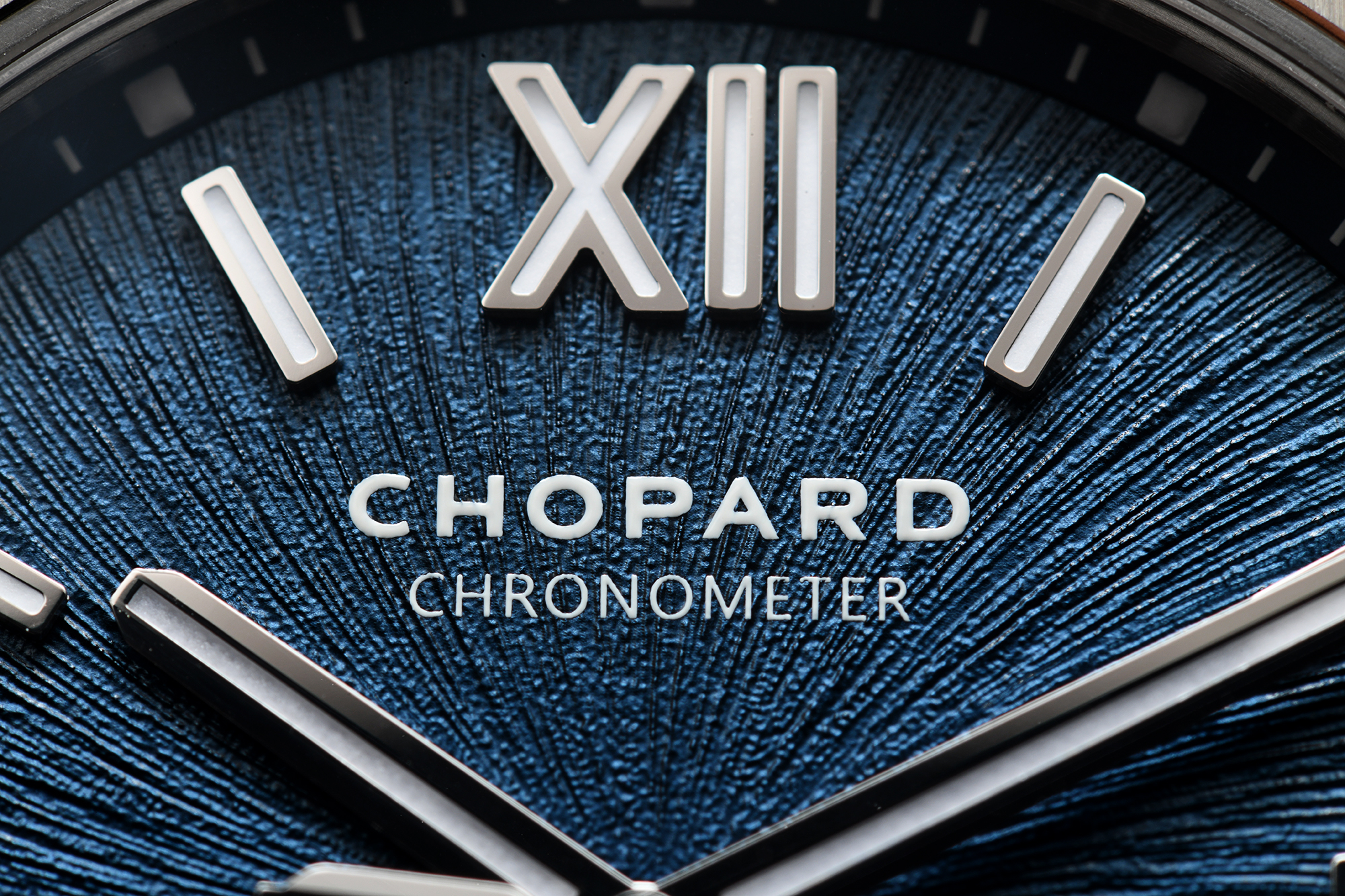 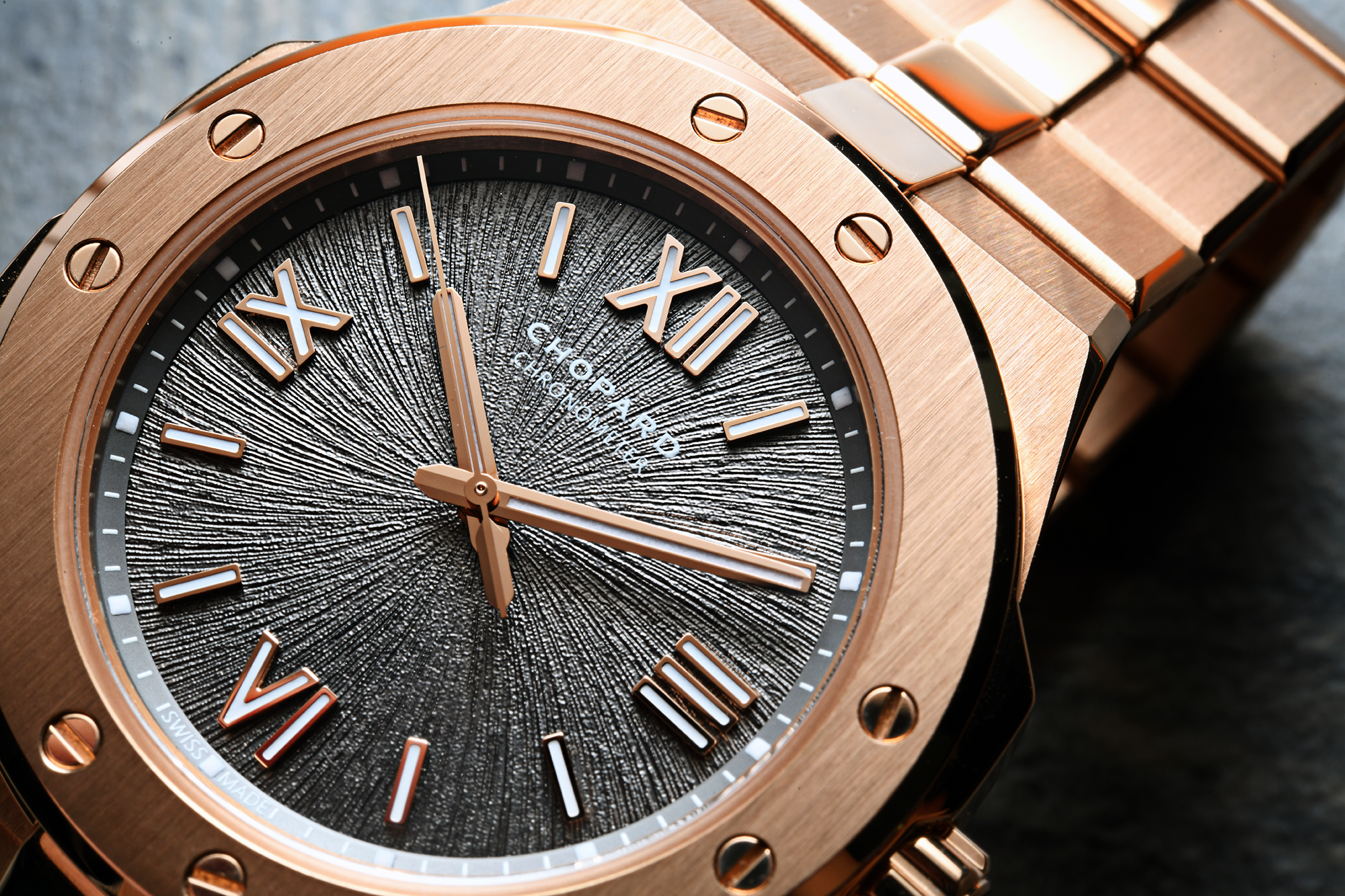 The details don’t end there, for this Alpine Eagle as well, introduces a new kind of stainless steel to watchmaking, with properties not seen in other more “normal” types of the alloy. Named “Lucent Steel A223”, it is harder than standard steel at 223 Vickers (hence the name) which is 50% more than standard steel. 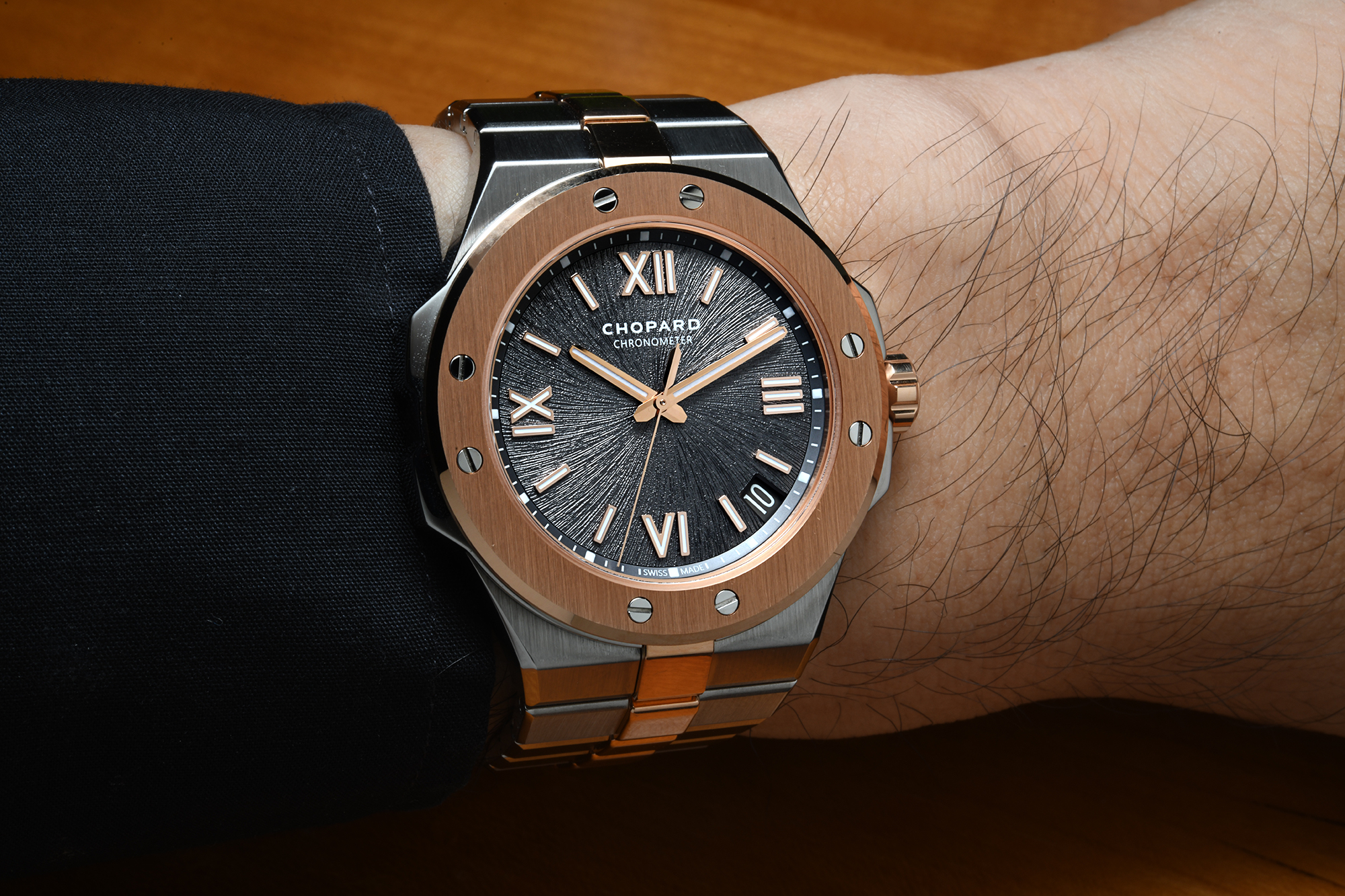 Also, as Chopard claims, due to the more purified form that this steel is, and its homogenous crystal structure, it is extremely hypoallergenic, and also reflects light light as brilliantly as gold. I’m interested to find out more about this unique material and its properties, and will certainly attempt to verify these claims. For potential buyers of this watch, it will be interesting to see if this material resists scratches better, and if it really does shine brighter.

The Alpine Eagle launches with quite a number of variations of case material and treatment. Primarily there are three 41mm sized watches, and seven 36mm ones. 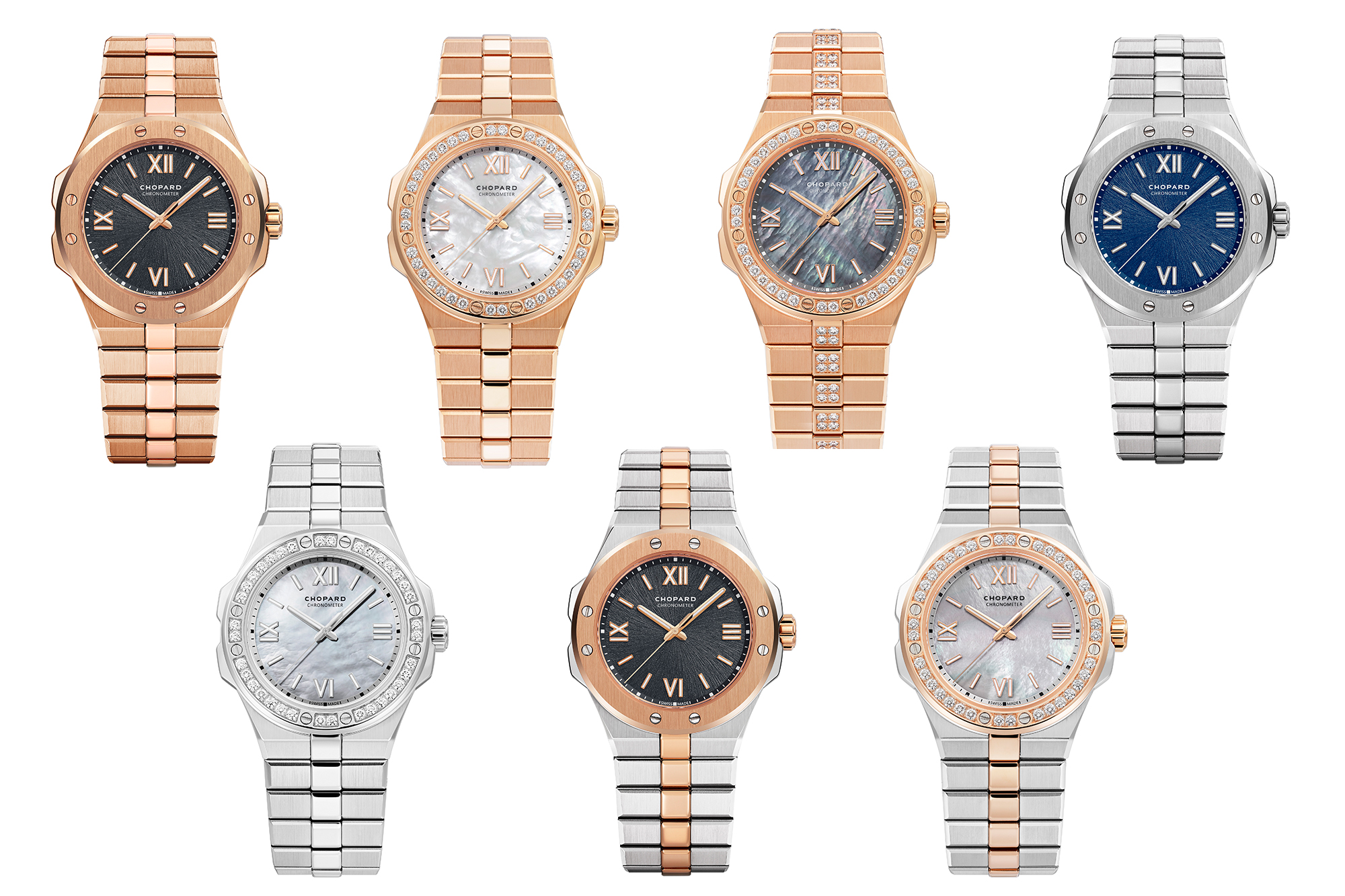 It’s not easy to enter the space of the integrated bracelet watch in which there are dominant players around, but if there is anyone that can do it well and succeed, it would be Chopard.

Certainly, my initial impressions of the Alpine Eagle when handling the watches in the flesh were very positive, and this despite my initial skepticism that a unique design could be achieved in this genre. Yet as a whole, the watches impress, holding their own in terms of style, and having a nice historical legitimacy that ought to silence the naysayers who are bound to emerge to make comparisons.

As a recreation of a watch from the brand’s history, the new Alpine Eagle is a true and worthy successor to the original St Moritz of 1980. In that sense, Karl-Fritz Scheufele has certainly done his father proud.

From a market perspective, it is smart to introduce a collection like this, since there is no doubt that the genre of the integrated bracelet can be a highly profitable and popular one if everything is done right.

The watch lover in me however, would have preferred to see the original name of St Moritz retained, but I can appreciate what calling it Alpine Eagle can achieve in a larger, more human context.

In many ways, it is up to everyone to start realising that the preservation of the natural environment is of vital importance, and Chopard have made a big step to put their money where their mouth is with their new collection. They could have chosen a more traditional name, and a more traditional presentation, yet they have, as part of their ongoing efforts to be good corporate citizens, decided to make a big statement that will mean that, if the collection succeeds, to commit to the environment for the long haul.

I for one did not know that there were eagles in the Alps, and now I do. That’s a good start, and quite apart from the very nice watches that Chopard has created in honour of them.