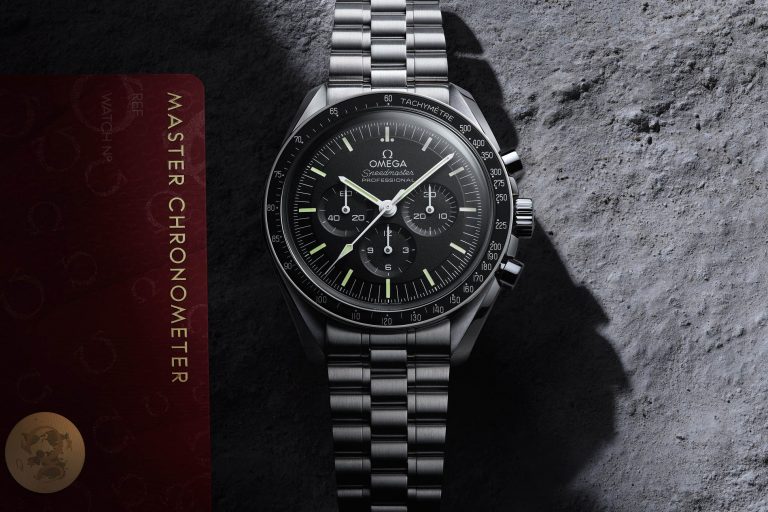 The New Omega Speedmaster Moonwatch for 2021

The opening of 2021 is shaping up to be quite a monumental one for the watch world, with the announcement of an upgrade to the Omega Speedmaster Moonwatch. Equipped with the latest generation Master Chronometer certified Calibre 3861 and vintage inspired cues, the new Omega Speedmaster Moonwatch doffs its hat to history, whilst incorporating Omega’s modern watchmaking sensibilities. Certification by METAS and magnetic field resistance to over 15,000 Gauss are just some of the upgrades included in this new collection.

With all of these upgrades, and small tweaks to its exterior appearance, it is certain that this new iteration of the Speedmaster Moonwatch will become an instant classic, with its perfect combination of history and modernity. And so, to kick off 2021, we have the new Omega Speedmaster Moonwatch collection.

In the world of watches, there is arguably no watch more integral to a brand’s story than the Omega Speedmaster Professional. Having been first created in 1957 as a racer’s chronograph, the Speedmaster would go through a few iterations before settling on its familiar asymmetrical case design in the 60s.

It would henceforth then go on to be utilised in NASA space missions, after being subjected to a brutal battery of tests, including Thermal Shock Tests, Extreme Vibration Tests and Corrosion tests, all while adhering to a timing average of 6 seconds per 24 hours. The Omega Speedmaster would then see its first use in 1965 as part of the Gemini III mission, and would be forever associated with the famed space programs of NASA.

Given its incredible history in the eyes of enthusiasts, it would be incredibly difficult for Omega to make changes to a watch where even minute details of its construction and configuration form part of the fabric of its story. With all of this in mind, Omega set out to improve the Speedmaster Moonwatch, with President and CEO of Omega, Reynald Aeschlimann stating “When updating a sacred timepiece like the Speedmaster Moonwatch, every detail must be true to its original spirit. This chronograph is recognised the world over, so we’ve approached its design with the most sincere respect, while taking its movement to the next level”. From this, we can only assume that Omega has paid tribute to its past, whilst giving the Speedmaster critical upgrades, bringing new standards to wearability, durability and chronometric performance to this emblematic watch.

The latest version of the Omega Speedmaster Moonwatch gives nods to Speedmasters past, with many of its details being based on the ST105.012 model of the watch – the model that flew up on Apollo 11, the first mission to the moon. With this model, vintage touches can be seen that will delight Speedmaster enthusiasts, including the Dot-Over-Ninety (DON) bezel in anodised aluminium and a “step-dial” where the subdials are raised above the minute track. Even more attention to detail can be observed in the hash marks between each second of the minute track on the dial –  instead of 5 divisions, there are now 3, to better display the fractions of a second according to the beat-rate of this new movement.

The steel versions of the watches are available in a hesalite crystal or sapphire crystal version, just like the outgoing models before them. Furthermore, there is now a visual difference on the dials between the two models that have the different crystals on them – on the sapphire crystal models, we can see an applied Omega logo, like early Speedmaster Professionals of the early 60s, and on the hesalite crystal models, they feature a painted logo, similar to the previous version of the Speedmaster. No longer will you need to spot a milky white ring or to feel the temperature of the crystals to determine what model you are looking at.

This vintage touch extends to the bracelet that appears to be inspired by the limited edition Apollo 11 Anniversary model in Moonshine Gold, or the ref. 1479 bracelet seen on many vintage models of the past.

The caseback of the watch is where the subtle reminder of the Speedmaster’s lunar history is engraved, and for this new edition of the Speedmaster, it has been redesigned to resemble the double stepped casebacks of vintage models. On the Hesalite crystal models, it is equipped with a closed caseback with the Hippocampus logo familiar to those who have seen many a Speedmaster of the past. This closed caseback features an engraving of “Flight Qualified By NASA in 1965 for All Manned Space Missions, The First Watch Worn On The Moon”, reminding us all of the certification date of this legendary watch.

The Sapphire crystal models are equipped with a sapphire crystal caseback, exhibiting a familiar movement, but with many key differences that bring it into the modern era.

If the exterior of the watch can be described as vintage inspired, then the interior of the watch is no less vintage inspired as well, but with today’s watchmaking sensibilities. The new calibre 3861 is now a movement in full production, having only been utilised in Anniversary models in the past (This includes the Apollo 11’s two 50th Anniversary models in steel and Moonshine Gold, as well as the Silver Snoopy 40th Anniversary model). The movement remains hand-wound, as per the original movements, however, they have been fitted with a free-sprung balance wheel with a silicon hairspring, as well as utilising more anti-magnetic components in their construction. As such, Omega saw fit for these movements to undergo Master Chronometer certification, and all new Speedmaster Moonwatch models will now come with this additional certification. As with many models in the Omega collection, the Master Chronometer certification ensures that the watch will not vary from 0 to +5 seconds a day, as well as maintaining its timekeeping abilities at different states of power of the mainspring, its water resistance, and most significantly, unperturbed when exposed to high magnetic fields of greater than 15,000 Gauss.

Steel is undoubtedly the most popular model in the Speedmaster Moonwatch collection, given its historical significance, and is available in a multitude of configurations: Hesalite or Sapphire crystal options as well as a steel bracelet or strap options (fabric strap for the Hesalite model, or calf leather for the Sapphire model). Precious metal models have transitioned in and out of the Speedmaster collections over the years – some as regular production models (such as the Yellow Gold versions that were available on leather and bracelet), or as anniversary models (who could forget the all Platinum version of the Apollo XI 40th Anniversary Speedmaster on Platinum bracelet). In 2021, we see two new precious metal models in the Speedmaster Moonwatch collection – an 18k Sedna Gold model, and an 18k Canopus Gold model on Alligator leather strap and bracelet options. Omega’s Sedna Gold is a form of Rose Gold that is highly resistant to corrosion and colour fading with its addition of Palladium into its mix, whilst Omega’s Canopus Gold is Omega’s special mix of White Gold that does not require rhodium plating for a longer lasting shine.

It was always going to be a hard task to incorporate Omega’s newest innovations into the Speedmaster Moonwatch collection without straying too far from the established formulae. With this new collection, Omega has achieved a herculean task of revitalising a watch that is so integral to the brand and to scientific endeavour, whilst remaining true to its roots and bringing its collection in line with modern watchmaking requirements.

However, one question remains: do you hold out for the new model, or do you rush in to get the old model before stock runs out? I am a firm believer that if you do not own the soon-to-be outgoing Omega Speedmaster Professional, then this is the best way to get into the most iconic watch the brand has to offer. It features all of the latest innovations that Omega has to bring to the table in the world of mechanical watchmaking (with their Master Chronometer certified movement), whilst staying true to the Speedmaster formula.

Furthermore, even with its inherent susceptibility to scratches, the Hesalite model is the way to go, if you are looking for the model that is the closest thing you can get to donning a spacesuit in preparation for Extra-Vehicular Activity. The reason why you get a Speedmaster is for its connection to lunar exploration, so the closer you can get to the original model, the better. It has been almost 50 years since we last stepped foot on the moon, and with the upcoming Artemis missions slated for 2024, there has been no better time to rediscover our nearest celestial body. And for those that say that the Speedmaster relies too much on the Moon for its communication, we at ISOCHRONO ask you this – if you were the first to go to the moon, wouldn’t you be announcing your achievements to the world too?

In any case, the Omega Speedmaster Moonwatch remains as a watch that carries an important legacy for both NASA and Omega – as a tool watch still utilised by the space agency, as well as the future of watchmaking for one of Switzerland’s largest watchmakers. With the new 2021 collection, the Omega Speedmaster Moonwatch keeps what has worked for over 60 years, and brings much needed internal performance upgrades that will keep it going for the next 60 years.