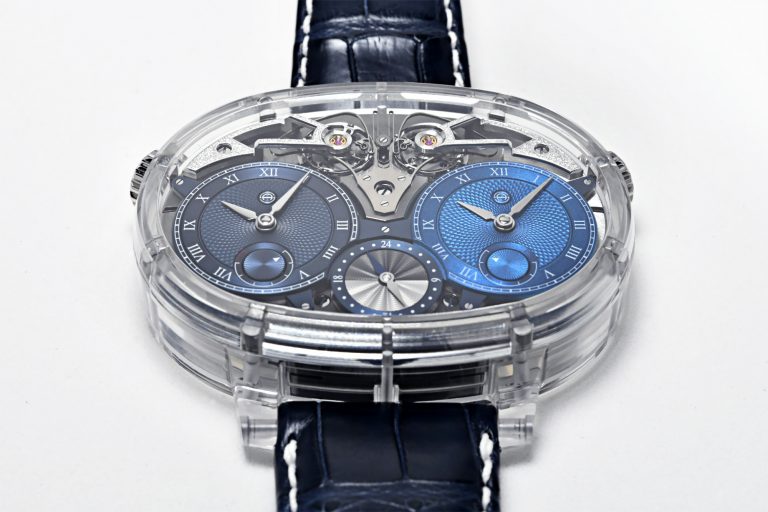 Announced at SIHH 2019, Armin Strom launched a new version of the Dual Time Resonance, the time appearing with quite a different look and feel than its predecessor versions due to it being cased in sapphire. This new variation is certainly stunning in appearance and might I say as well, much better looking in my opinion than the other three variations cased in titanium, white gold or 18K rose gold.

Why? When the first Dual Time Resonance was launched late last year in 2018, it was a remarkable tour-de force that extended the utility of the Resonance based watches from Armin Strom to its owner, appearing with two large sub-dials for the first time instead of one, with each being about the same size as the time sub-dial on the Resonance Pure.With two sub-dials came the possibility of using the watch in a few interesting ways. The first, to set each sub-dial to its own time, for tracking two different time-zones, and this was helped by a central smaller sub-dial that distinguishes the time-zones on a 24 hour scale with different coloured hands.

The second, as a countdown timer, used by setting the time of one sub-dial to 12 o’clock at the start of time measurement, one can then read off elapsed time as one does any watch.

The third, for those interested to track the performance of the proprietary Resonance oscillator, was to have both sub-dials set to the same time, and then over the course of the movement’s operation, monitor both the times to see if there are any deviations that occur.

On that last point, the Mirrored Force Resonance did allow one to do this as well, by noting the deviation that was visible via the two seconds sub-dials hands, each linked to its own balance wheel and gear train. 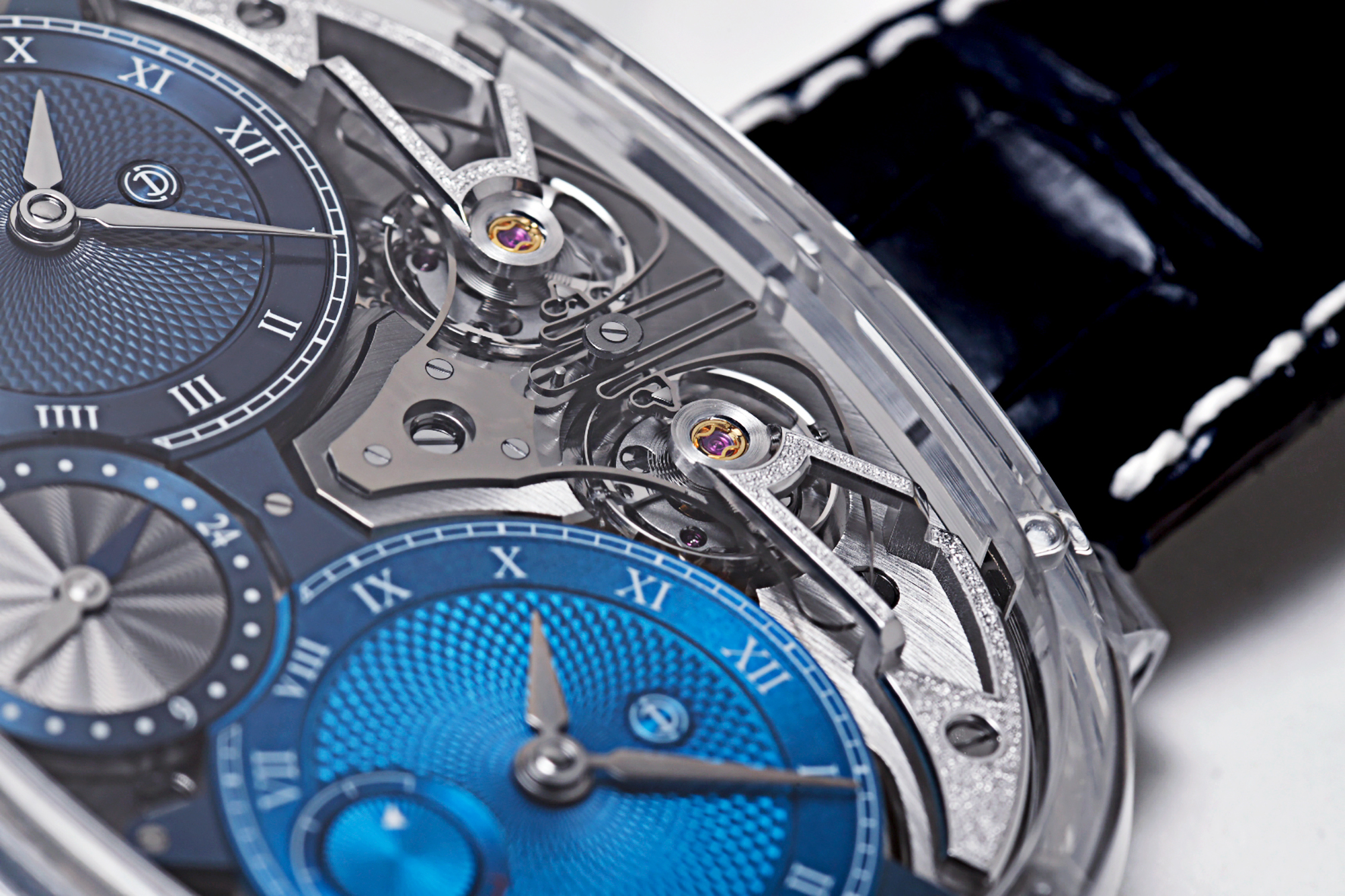 With the brand’s proprietary Clutch Spring taking pride of place in the top centre of the watch, and the two large visible time sub-dials with the aforementioned advantages available to this new type of Resonance watch, it had to be big, and sized for those who were unafraid of making a bit of a statement, coming at at 59mm wide by 43.4mm tall, and with a thickness of 15.9mm, making up an uncommonly seen oval shape on the wrist. 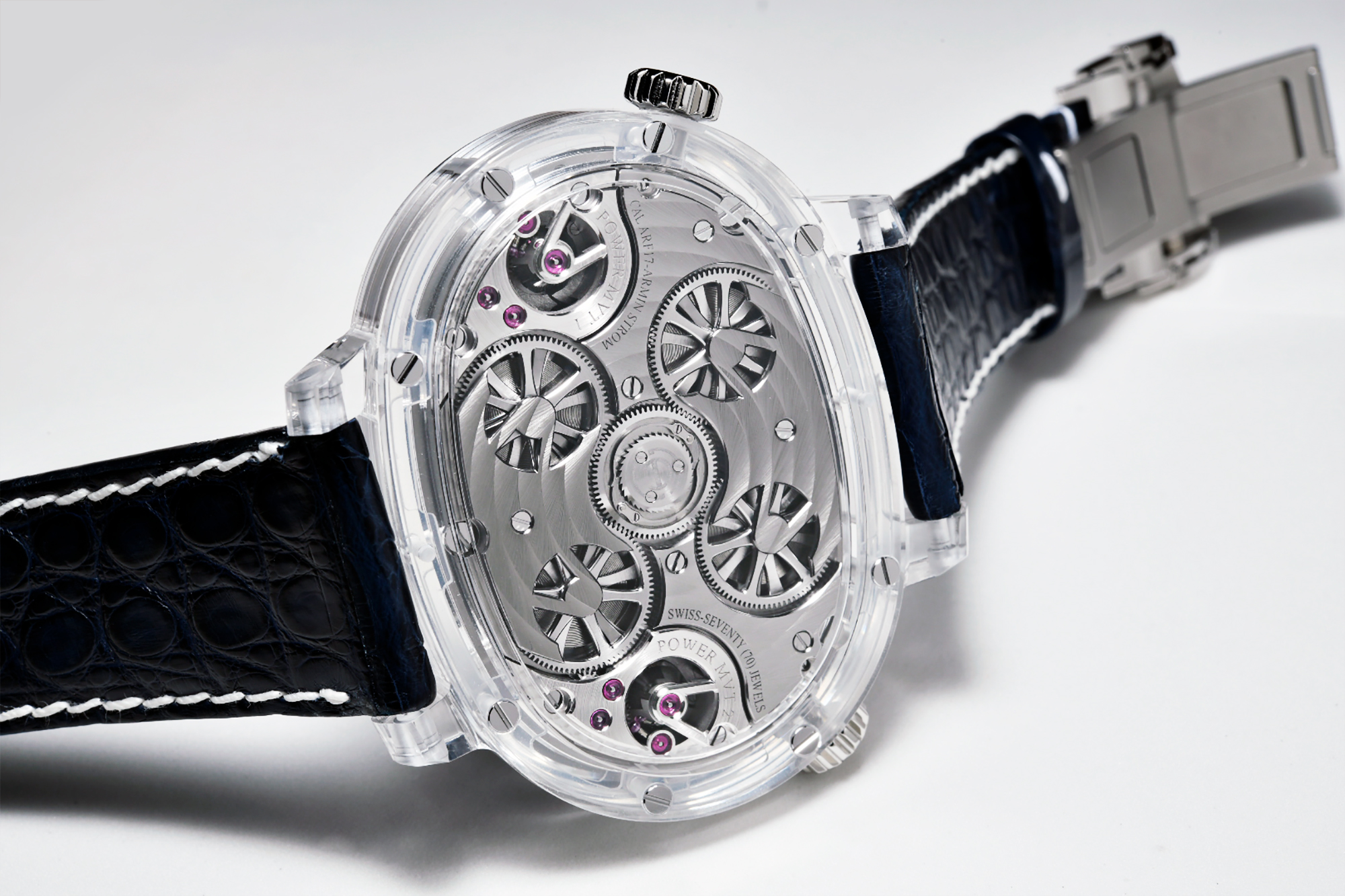 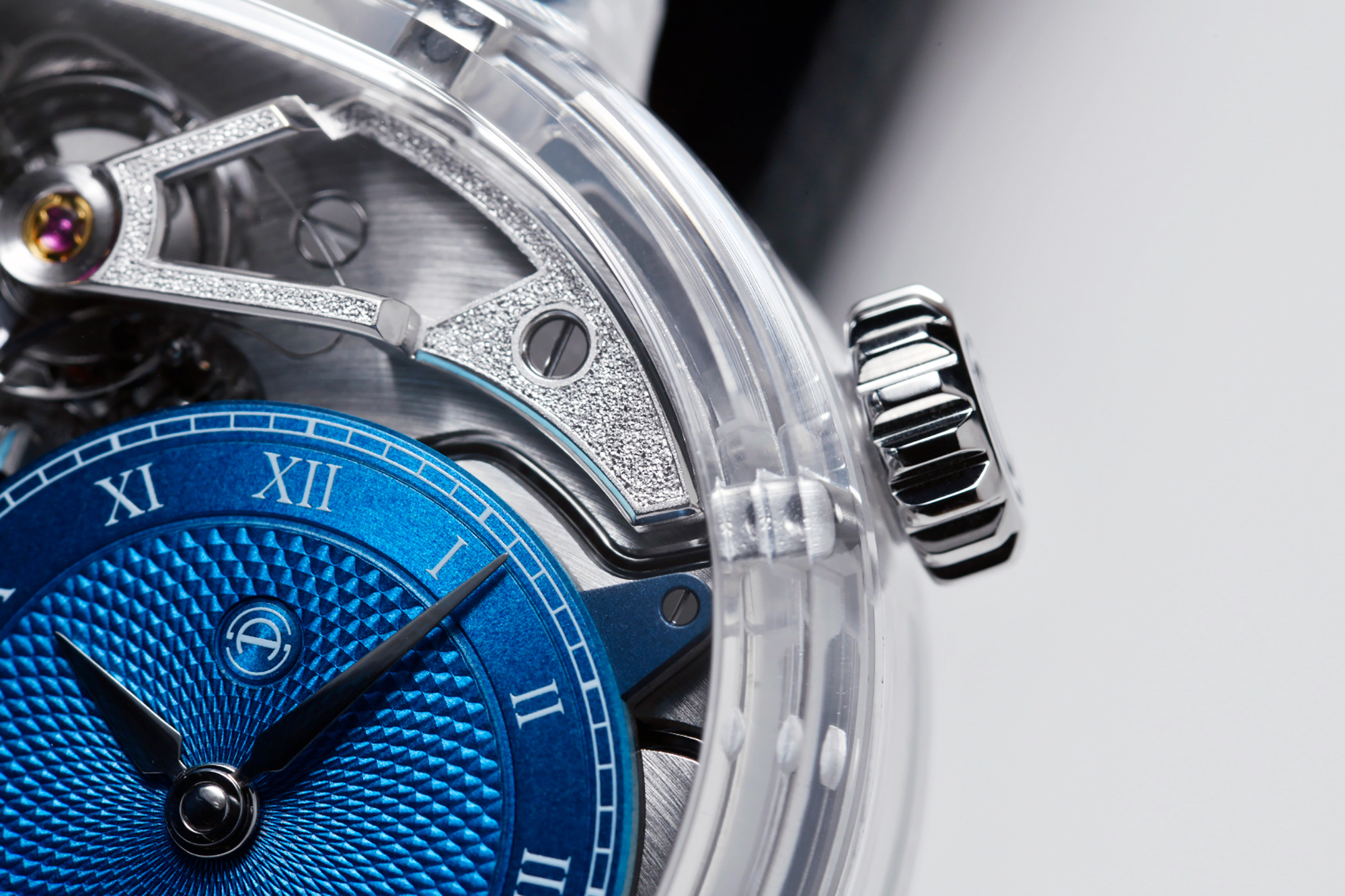 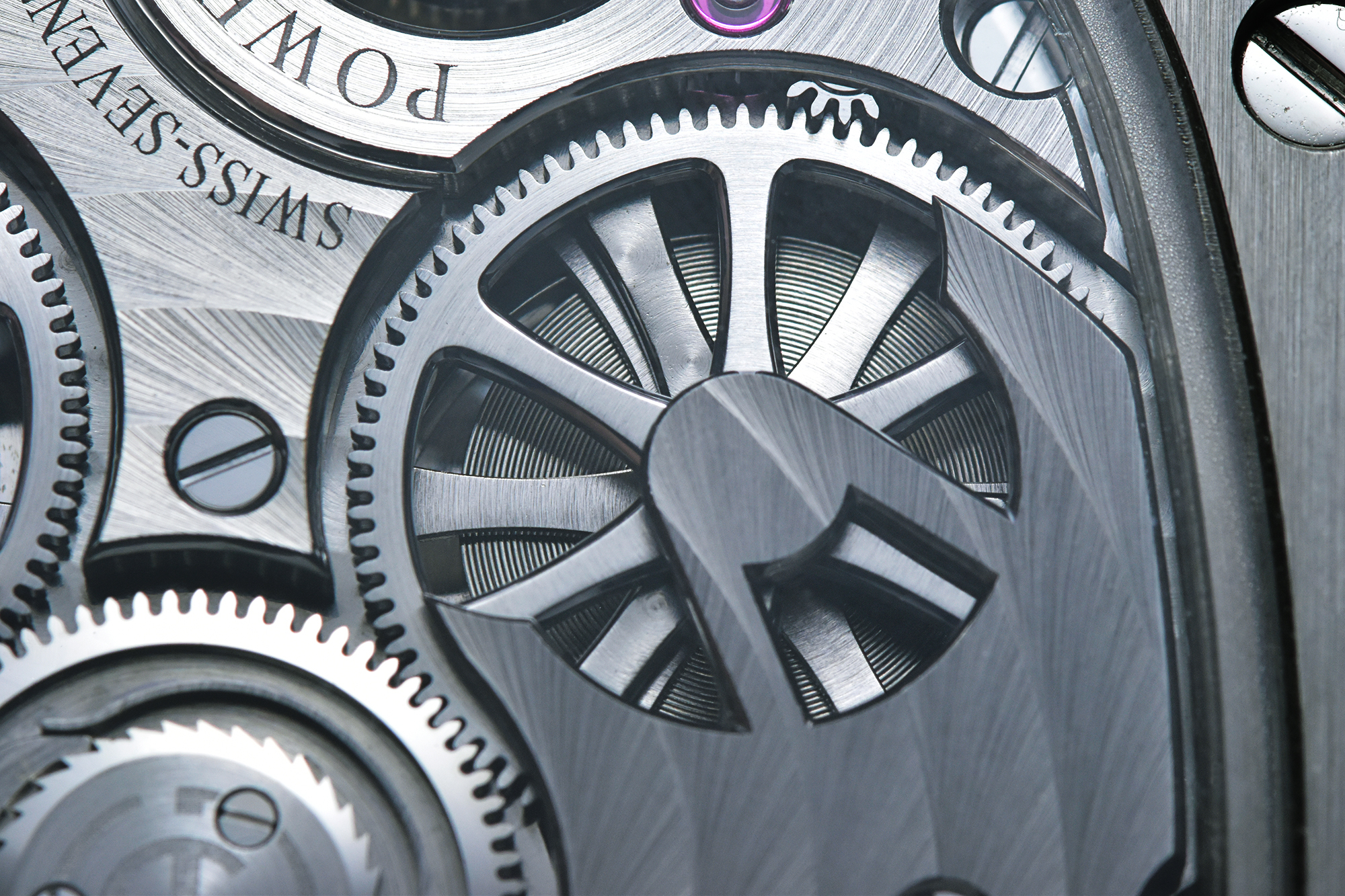 Functions wise, the watch came with two separate crowns are on either side of the case, with the left one for setting the time on the left sub-dial and winding up the 4 barrels at the same time via the interconnecting gear in the middle. The right crown of course, is for setting the time on the right dial, with each time sub-dial containing at 6 o’clock on each dial, it’s own power reserve indicator.

The version of the watch that I first saw when it was first launched was made of titanium, and even then it had a visual effect that was very solid and heavy. Massive and technical, it was a piece that was unafraid of throwing its weight around (so to speak). Well I didn’t handle the precious metal versions of the Dual Time Resonance at the time as they were unavailable, but certainly they would have an even higher level of presence that the owner would feel due to their weight.

Which is why when the sapphire version of the Dual Time Resonance appeared (with fetching dark and light blue guilloché sub-dials), it instantly felt that I had been transported to space. Why? Well it was a feeling of weightlessness that overwhelmed suddenly, coming from the obvious transparency of the new case. Visually the watch looks smaller than its predecessors, even though it is not, and on the wrist, it doesn’t feel as overwhelming.

Of course, sapphire does this to watches generally, as most sapphire cased watches compared to their metal counterparts do “feel” lighter. Yet, sometimes it can move too much in that direction, making it feel a little too insubstantial, and might I say, cheap. Not so with the Dual Time Resonance in Sapphire however, as the case now gives a perfect frame to the main complications on the face of the watch, and it all feels more balanced and just right. How do I know? Well, now that it has both a sporty and a horologically serious demeanour, I found myself not so eager to take it off to return it.

Armin Strom’s Clutch Spring has so far appeared on three watches – the aforementioned Mirrored Force Resonance, the first watch that the brand that was made to take advantage of this effect, followed by the Resonance Pure, a more simplified version of the former, and the third member, the Dual Time Resonance, without doubt the most complicated member of the series, coming with two time telling sub-dials instead of one.

As it stands, what this particular watch, the Dual Time Resonance in Sapphire represents for me, is a maturity of the Resonance collection by Armin Strom, since there is now a full family of watches that showcase the brand’s proprietary Clutch Spring, that strange, butterfly shaped piece of metal that vibrates as a true physical connection, transferring the rate information from one balance spring to another, allowing both to synchronise gradually, and achieving resonance.

With different variations of size, case styles, and now, sapphire as a case material, there are now quite a few ways for watch lovers to access and appreciate this rarely seen complication in horology.