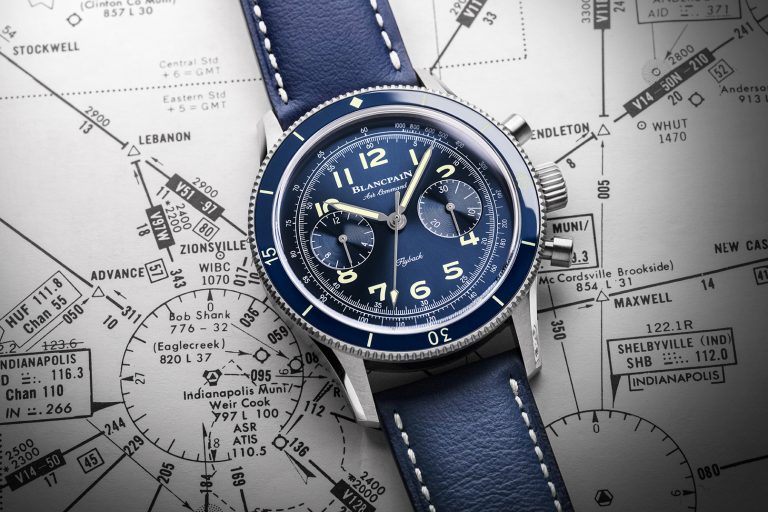 Created in the mid 1950s, the Blancpain Air Command is somewhat of an enigma in the world of vintage watch collecting. Lost to time, as well as financial crises, its history is scattered, and its true story may never be fully unearthed. Nevertheless, the Air Command has captured the hearts of collectors at auctions, as well as when the brand released a tribute model in limited quantities in 2019. This year, we see a permanent addition to the Blancpain collection, with the new Air Command coming in two versions, as well as a model in a material that is very uncommon in the watch industry.

The watch industry has gone through many tumultuous events, most notably the quartz crisis, which not only wiped out many brands, but much of the savoir-faire and tribal knowledge accumulated within the industry. This is similar to what happened with the Blancpain Air Command – designated as a flyback chronograph, the auction house Phillips Watches describes that the watch was created after successful implementation of the brand’s Fifty Fathoms watch across US military units. Scholars and collectors agree that the Air Command project did not proceed after Blancpain proposed it to the US Air Force, and only a few examples from this era survived. Since this period, interest in the Air Command remains high, with examples hammering well above estimates at auctions, however its full history in terms of its production numbers and true purpose remain unknown. Its history may be a mystery, but its utilitarian looks have captured collectors around the world.

The Blancpain Air Command for 2021 comes in a 42.5mm case, in either red gold, or the unusual Grade 23 titanium (the same grade of titanium used for biomedical purposes due to its compatibility with the human body). The watch features a countdown bezel hewn out of ceramic, and has SuperLuminova inlays for the 5 minute markers. Luminescent material also fills out the Arabic numerals on the dial as well as the hands, including the tip of the chronograph seconds hand. The periphery of the dial includes a tachymeter scale for measuring speed, and the subdials are similarly vintage-inspired with the 3 minute markings in the minutes subdial used for easier reading. Arranged in a bi-compax layout, the subdials measure minutes and hours, arranged at 3 o’clock and 9 o’clock respectively. Text on the dial is limited to “Blancpain”, “Air Command” and “Flyback”, making the dial very clean for a chronograph. The dial also features a sunburst finish that begins from the cannon pinion (where the minutes and hours hands are mounted) and radiates outward.

A glass box sapphire crystal protects the dial, and gives it a vintage aesthetic, as well as the rear of the watch, reducing its apparent thickness. Both models are delivered on calf leather straps, with pin buckles matching the watch case.

Housed within the Blancpain Air Command is the Calibre F388B, a variation of the F385, that is famed for its automatic winding, 5Hz beat rate, as well as its vertical clutch flyback chronograph. The vertical clutch made its debut in Fine Watchmaking with Blancpain in the Frederic Piguet 1185 – being a mechanism that prevents the seconds hand from skipping forward upon activation. Befitting a pilots watch, it also houses a flyback chronograph – used by pilots to navigate with distance and time waypoints. It is also equipped with a silicon balance spring to protect from magnetism, and has a power reserve of 50 hours.

The enigma of the Blancpain Air Command continues to capture the imaginations of watch collectors everywhere – as such, it is only fitting that the brand gives the fans what they want. Delving deeper into Blancpain’s history is a great thing, as the brand has so many more untold stories that are waiting to be discovered – the Air Command is a great example of a watch that has captured the essence of an era, modernised with today’s watch sensibilities.