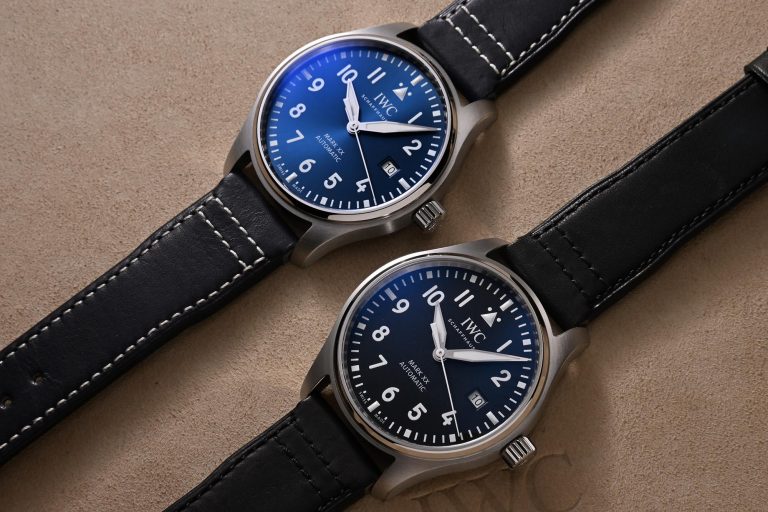 Is the IWC Mark XX the perfect Mark series watch to buy?

The IWC Mark series saw the quiet release of a new member this year in the form of the Mark XX, but what was curious was how it came into being, since there was none of the pomp and circumstance that such a watch would normally provoke.

In fact the watch suddenly appeared on IWC’s website overnight, leaving those who spotted it wondering whether the whole thing was real or a hoax. Adding to the mystery was the fact that no press releases were sent out announcing its launch, which was extremely uncharacteristic.

Given the iconic status of the Pilot watches in the context of the IWC brand, and easily being the entry point into the most popular collection of the brand for a new collector, it was puzzling and curious at the same time.

And then another strange thing – when I called IWC to inquire about the watch, it was, on that day itself, already available for sale at my local boutique.

Leaving that aside, the new IWC Mark XX does come with a meaningful series of updates that in my book make it the best Mark series watch to buy right now, if you happen to be in the market for one.

The previous model of the series, the Mark XVIII that was launched 6 years ago, was a culmination of many little details that were oftentimes requested by IWC fans, and its appearance to the market was warmly welcomed.

After-all, it had dispensed with the controversial triple date window seen on the Mark 17, while also restoring the Arabic numerals (3,6,9) that went missing on the Mark 16 (and 17) and all while having a modern 40mm size compared to the 38mm of the Mark 15.

These changes made the Mark XVIII a favourite among IWC fans and it was a watch that I saw frequently on the wrists of enthusiasts at watch events.

Yet with all these attributes, the Mark XVIII was by no means perfect. There were still a few things that I thought could have been better, and joyfully, we find that the new Mark XX is IWC’s attempt to address some of the objections of the previous watch, allowing it to inch ever closer towards perfection.

It also comes with a new in-house calibre 32111, which replaces the non in-house Selitta calibre that powered the previous Mark XVIII. While some might argue about the finer details of how in house this movement can be given that the architecture was based on the ETA 2892, I consider the extensive modifications and upgrades by IWC enough of a step to call it one. There really isn’t anything you can object to given that you are getting a silicon hairspring (for better anti-magnetic performance), 120 hours (5 days) of power reserve and all while staying within the expected price range of an entry level watch.

For those who want a truly versatile watch, water resistance has also improved – previously being 60m with the Mark XV to 100m with the Mark XX. This improvement should have been done a long time ago, even as I understand how rigorously IWC tests their watches and how they would likely be able to survive when worn swimming. Still, it does help, with the 100m water resistance of the Mark XX, to allow one, disregarding the leather strap, to be a little more carefree if things are likely to get wet with the watch on the wrist.

Aesthetically in comparison to the Mark XVIII, some elements have been shifted around slightly and overall the dial of the Mark XX is more elegant in my view, with slightly small numerals that allow more negative space, as all as allowing the date window to come in line with the 2 and 4 numerals above and below it. Another nice touch, the date window now comes with a white background, recalling the first two of the Mark series that came with a date complication – the Mark XII and Mark XV.

In fact, it’s worth noting the case diameter and the case thickness of both the Mark XVIII and Mark XX are exactly the same at 40mm and 10.8mm respectively. It is only the lug to lug distance that has changed. That 2mm difference makes all the difference in the world, and I am guessing that IWC listened to the feedback that was out there on the Mark XVIII and acted accordingly.

What can I say to that? Bravo!

My conclusion is that the Mark XX is the Mark series watch to buy if you want to get one from this storied collection. It is simple, legible and iconic, and with the technical upgrades on board, could really be your only watch if you could only have one or it not, the watch you reach for when you want something that just works.

What is one more thing that could be improved? Well, if IWC could bring back the chopped hour hand to the Mark Series, that would be ideal. However as it stands, they are only doing that for the special limited edition watches (like the one shown below) that come out every now and then. So, not really a big deal, but it would be nice.

Two dial variations were available at launch, in either a classic matte black or a more contemporary sunray-brushed blue finish. Black for me please. Singapore price at SGD7900.

Click here to see the product page of the Mark XX at iwc.com