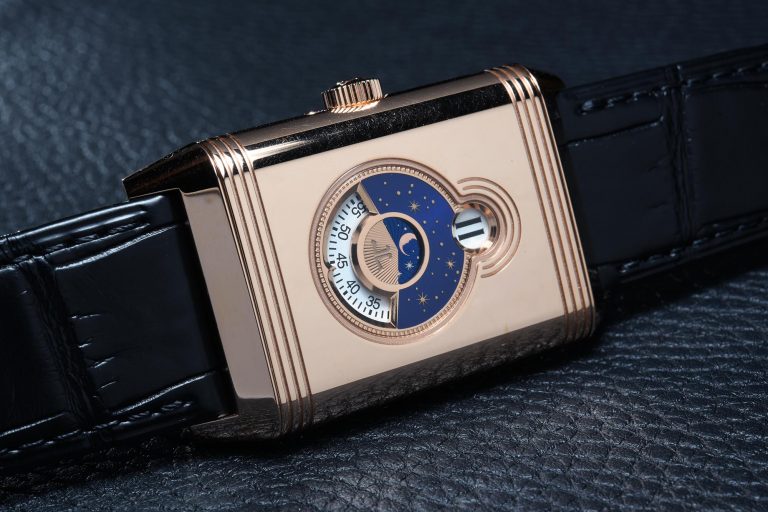 It has been 90 years since the inception of the Reverso, and it has seen many iterations during its lifetime. From its original design with the stainless steel back in 1931, to models featuring more complications such as dual-faced versions first introduced in 1994. Since the late 20th Century, haute horologerie is no stranger to the Reverso, most notably with Gyrotourbillon models featuring prominently in collections past. In 2021, following on from the release of the latest Reverso model in the Hybris Mechanica collection, the brand continues to celebrate this emblematic model with the Reverso Tribute Nonantieme (the last word being Swiss-French for 90th).

For the first 60 years of the existence of the Reverso, complications were not even a consideration for this legendary model line – as we all know, the main purpose of the Reverso was to have the front telling the time, and the back protecting the fragile glass. This changed in 1991, with an anniversary model celebrating the 60th anniversary of the Reverso, the Soixantieme (French for 60th). This was the first Reverso that set the tone of complicated Reverso models – the Soixantieme including a power reserve indicator, date and small seconds, along with an exhibition caseback exhibiting its shaped movement.

After this foundation model, the brand released more complicated Reverso watches, including a Tourbillon model in 1993, the Reverso Repetition Minutes in 1994 (a watch that marked the first time that Jaeger-LeCoultre miniaturised the minute repeater for a wristwatch), and in 1996, a chronograph model that elegantly positioned the chronograph display on the reverse side of the watch, arranging these in an elegant fashion for a rectangular case, and keeping the timekeeping side uncluttered.

The Reverso Tribute Nonantieme is a limited edition of 190 pieces worldwide, and continues this tradition of a complicated Reverso watch to celebrate a significant decade, but not in the way we might all be expecting. On the front of the watch is a silvered dial with sunburst finishing, featuring applied markers and dauphine hands. A big-date display can be seen at 12 with gold framing around the numerals, and a moon phase indicator at 6 o’clock. This area also houses the running seconds hand, keeping the front dial clean and elegant, befitting of a Reverso. Upon flipping the case around, however, we see a new expression of timekeeping that Jaeger-LeCoultre introduces to the Reverso for the first time.

On the reverse side, we see a digital display of the time, with the hours in the aperture at the top, and the minutes being indicated by the disc at the bottom of the figure-of-eight shaped cut out. The centre of this display includes a day/night indicator, and surrounding this indicator is a three-quarter plate that is lacquered in a vivid blue that fill the spaces below the stars in relief.

This conceals some of the minutes disc in a beautiful way, and is accomplished by the artisans in the “Atelier des Metiers Rares” – no doubt a gorgeous addition to this side of the Reverso Tribute Nonantieme. Housed within this celebratory Reverso is the in-house Calibre 826, comprising 230 components, showing the same time on each side of the watch for both time displays.

We most certainly expected to see something like the Jaeger-LeCoultre Reverso Tribute Nonantieme, being the 90th anniversary of such an important watch and an icon of design. What was not expected from us at ISOCHRONO was how elegant and understated this was executed – complications can sometimes be a little overwhelming, but trust La Grande Maison to figure out a way to incorporate these in a way that is minimalistic, and yet encourages physical interaction with the watch to discover more about it. The Reverso Tribute Nonantieme is most certainly the post-show surprise we needed, ticking all the boxes that a Reverso should – elegant, understated, and highlighting the elements of craftsmanship befitting of Jaeger-LeCoultre.