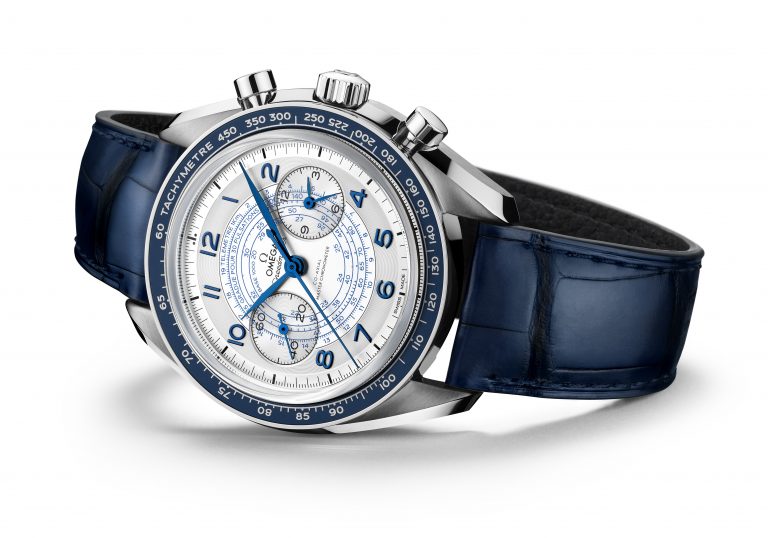 The Omega Speedmaster itself needs no introduction as its reputation precedes it. The watch most famous for making it to the moon was originally created as a racer’s watch, meant to measure race times, rather than timing oxygen burns. Its focus as the Moonwatch has certainly made it relevant for today, however Omega has a much richer history than just the moon landing – as a manufacturer of fine chronographs of the time. Watches from the early part of the 20th Century would include many scales on the dial, for a myriad of uses with the chronograph, expanding its functionality. The new Omega Speedmaster Chronoscope pays tribute to these early 20th Century watches, built for elegance and utility.

The aptly named Speedmaster Chronoscope (a combination of two Greek words: Chronos – “time” and Scope -”to observe”), is an instrument meant to aid in the measurement of all things time related. Bringing back an aesthetic commonly seen in Omega chronographs of the early 20th Century, these multi-scale watches would often feature a tachymeter for speed, telemeter that was often used to tell how far away a thunderstorm is, and a pulsometer for measuring heart rate – these would often form a spiral or concentric-circle pattern on the dial, leading them to be colloquially known as “snail dials”. These new Speedmaster Chronoscope watches echo these early watches with their multi-scale designs – a unique design trait for a watch of the modern era.

Measuring in at 43mm, in stainless steel or Omega’s proprietary Bronze Gold case, the watch is a bi-compax chronograph with subdials for the running seconds at 9 o’clock, and an integrated hour and minute chronograph subdial at 3 o’clock. Arabic numerals make the dial very readable, even with the amount of scales on the dial, being applied numeral markers that bring extra depth to the dial. The aluminium bezel insert (colour matching with elements on the dial) is the trademark tachymeter for which the Speedmaster is famous for – the Speedmaster was the first watch with a tachymeter bezel in 1957, after all. The Bronze Gold model, however, sports a brown ceramic bezel, its sheen adding a further touch of luxe to its warm toned case.

Towards the centre of the dial, we start to see the additional scales that distinguishes this watch from its moon-faring brethren – the first internal scale we see is the telemeter, graduated in kilometres, and further inside the dial we see the pulsometer, graduated for thirty pulsations. The last two scales we see are additional scales for the tachymeter, for speeds slower than 60km/h or 60mph, and slower than 30km/h or 30mph (this watch can theoretically measure average speeds as slow as 20km/h or 20mph, according to these scales). Even with all of these graduations on the dial, the watch appears incredibly symmetrical in the vertical plane – furthermore, there is no date window to disturb other dial elements, making this dial very pure in its appearance.

The stainless steel models are mounted on a bracelet similar in style to the Speedmaster Professional watches that made their debut in 2021, albeit with a quick-adjust system in the clasp with two positions, for when your wrists swell in the heat. Leather straps are also available for the other stainless steel models, with a vintage style, two-stitch tan colour calfskin available for the blue dial, blue alligator for the silver model, and a semi-perforated black racing-style calf-skin strap with red lining for the panda dial model. The Bronze Gold model comes on a vintage style, two-stitch chocolate calfskin on a Bronze Gold buckle.

Housed within the watch, is the Omega Co-Axial Master Chronometer Calibre 9908, a movement that is very similar to ones found in Omega’s automatic Master Chronometer chronograph movements. A differing point from other movements before it is the finishing – the Geneva waves in Arabesque appear to emanate from the balance wheel, instead of the centre point of the movement – a first for Omega. Like all mechanical watches coming from Omega, the movement is also Master Chronometer certified, passing stringent tests for power reserve, precision and water resistance – tested while cased up, the last control before delivery to the customer.

Omega have inadvertently given Speedmaster lovers something they didn’t know they wanted. While it is surprising to see a Speedmaster with the “snail dial”, there is an old-world charm to the Speedmaster Chronoscope that cannot be avoided. With its vintage charm, familiar case and imminent wearability, the Omega Speedmaster Chronoscope is a watch that reminds us of Omega’s past in creating elegant chronographs for the sporting gent or lady.