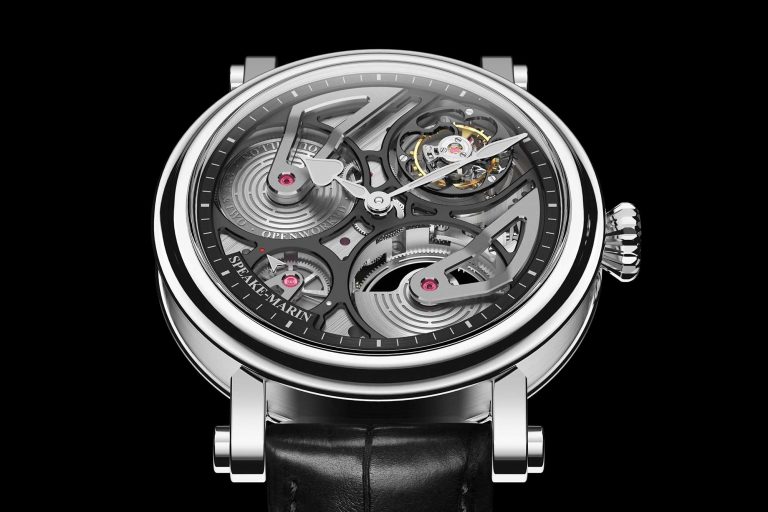 One of the surprises for me last year was the “One & Two” Openworked Dual Time from Speake-Marin (read at link below), which took the aesthetic direction established by the first “One & Two” time only watches from 2017, building it out in a new direction with a useful complication, and done in an innovative and imaginative way.

This is definitely a collection that has marked a clear transition away from the off-the-shelf movements of the brand’s standard watches, moving towards specially developed in-house calibres with special features that offer more horological interest to buyers.

This year, Speake-Marin has doubled down on this direction, extending its Openworked range with a new watch that is decidedly more high-end than the rest, the “One & Two” Openworked Tourbillon with a 60 seconds Flying Tourbillon.

The aesthetics of the new watch are mostly the same as the time only and dual time versions before, and that is on account of the fact that all of them have movements that are related in their structure. This new one, with an off-centred, flying tourbillon at 1.30 o’clock, where the small seconds complication would be located on the previous “One & Two” watches, is the new SMA05 Calibre.

From the dial of the watch, the 3Hz (21,600 alt/h) flying tourbillon is visible, with the cage covered by the iconic Speake-Marin rotor shape in black as a reminder of the Speake-Marin logo. Also visible is the micro-rotor for automatic winding at 5 o’clock and the 72 hour barrel at 10 o’clock.

Given the space constraints that existed in the base calibre, the tourbillon is necessarily quite small, yet it is still plainly visible and adds something special to the collection. Speake-Marin claims that the tourbillon gives the watch a +/- 4 second per day accuracy, which is sort of within, yet not really matching up to COSC certification (at +6/-2 seconds a day). That being said, it is quite uncommon for a brand to claim accuracy performance with regards to tourbillons, even though this is their raison d’être, so it is a welcome move on their part. It does invite people to test the claim however, so we’ll see if it stands up in real world use if we have the chance.

While the headline feature is the flying tourbillon, the new watch features a new version of the brand’s signature “Piccadilly” case. While the new case looks to the naked eye to be the same as the original, some subtle changes have been made. For example, it allows straps to be integrated closer to the case. Also the signature onion crown has been moved further into the case. Lastly, the bezel and caseback slightly overlap the central case section, with a new box crystal allowing a reduced overall thickness, while making the profile of the watch very attractive.

So Speake-Marin, please do try to clarify these facts in your press release or at least modify the name of the collection to something that is easier for people to understand. I think that it does no favours to people who might be attracted to the aesthetics and horological merit of the collection, and then be stumped by something so confusing.

The One&Two Openworked Tourbillon is a limited edition of 10 pieces in each case metal (rose gold or titanium), with 5 in a 38mm case and 5 in a 42mm case. That means a total of 20 watches in case it’s not clear.

All in all, it’s a nice release from Speake-Marin, and I’m keen to have a look at the physical watches themselves as I was impressed by the Dual Time last year. This collection deserves to be more well-known than it is currently based on what it offers, and I hope that the brand will be able to make a case for it among watch buyers in the future.