It is comforting to realise that the climate crisis issue that has dominated our discourse since late 2018 has resulted in positive initiatives around the world, even though I remain ambivalent that it’s momentum had come about through a young Greta Thunberg taking to the stage at the UN to scold the adults of the world for continuing in actions that were stealing her future.

Shortly after that, plastic straws started disappearing in cafes and restaurants around the world, being replaced by paper ones that would become soggy after 40 minutes or alternatively dangerous seeming metal ones that could impale the skull if you were pushed from behind while drinking your coke.

Still, I can intellectually get behind the idea that something need to be done, and as the human race tries its best to sort things out, at least there is enough collective agreement for things to move in the right direction.

Watch companies too, like many other businesses have gotten into the act, and whether or not one is cynical of the profit motivation that begins these initiatives, one cannot deny that when done correctly, all these actions add up.

Of course, while this has receded somewhat into the background given the ongoing medical crisis of 2020, the existential threat to our environment is still there, and there are still initiatives being launched that are addressing them.

So I’ve been spending time with an interesting watch from Swatch, one that seems to be representative of the spirit of doing things the right way. 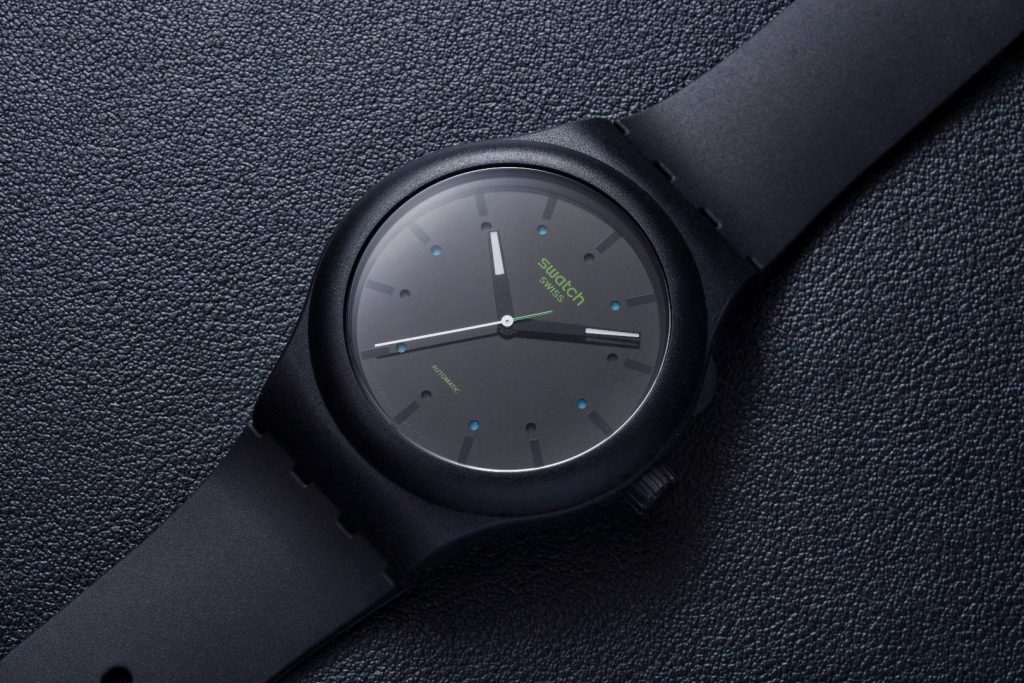 The new Sistem51 – “BIORELOADED” from Swatch is a watch whose case and strap is made from an extract of the seeds of a castor plant, meaning that it is bio-sourced and renewable. Not only that, it is lighter and stronger than traditional plastics.

This plant based material seems to be the leading ingredient in a new generation of plastics that are being adopted for many applications that can replace traditional plastics. In fact some of the castor seed based plastics are better suited for certain technical applications such as in the automotive industry since they are lighter in weight and stronger.

In fact the “BIORELOADED”  series was first launched this year in a line of watches that recall the original launch collection of Swatch way back in 1983, the Swiss watch industry’s response to the quartz crisis at the time. Remade in the same colours and nicknamed the “Impossible” project, the new collection features the exact same models and colours with the main difference being that the cases are made of this new castor seed based plastic, and also that the Swatch logo on the dial is green, a marker of the “BIORELOADED” case and strap that is present, something that you see in the dial of this Sistem51 based mechanical version featured here.

Now I’m not really partial to quartz watches all that much, so I wasn’t too excited when this watch was placed in front of me. When I was presented with this watch however, the first thing I noticed was the seconds hand sweeping, and realized that it was the automatic mechanical Sistem51.

The fact that this new material is used in the Sistem51 collection is somewhat more satisfying since as a mechanical watch, it doesn’t contain a battery like the quartz based versions, this is the main reason why this release is, to a watch nerd like me, more emotionally resonant and “correct”.

There are two models that make up the initial launch of the Sistem51 “BIORELOADED”, one blue and the black one shown here. 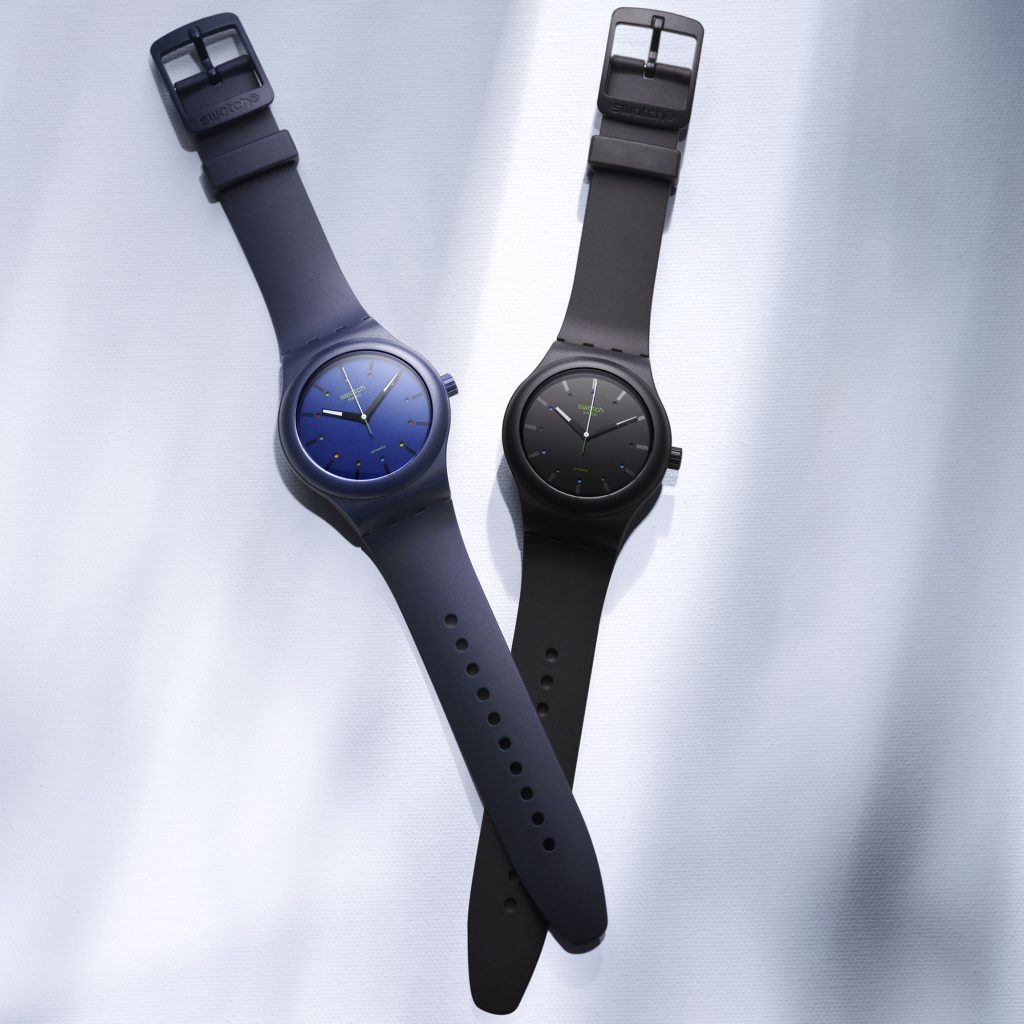 The black version is my preferred one, since the colour scheme lends itself to feeling extremely minimalist and austere. This is helped by the glossy black dial, with bar-shaped matte indices that point towards recessed hour marker dots in blue. There are enough subtle details to draw the eye when looking at it up close, yet the curious thing is how this watch appears in different lighting conditions. 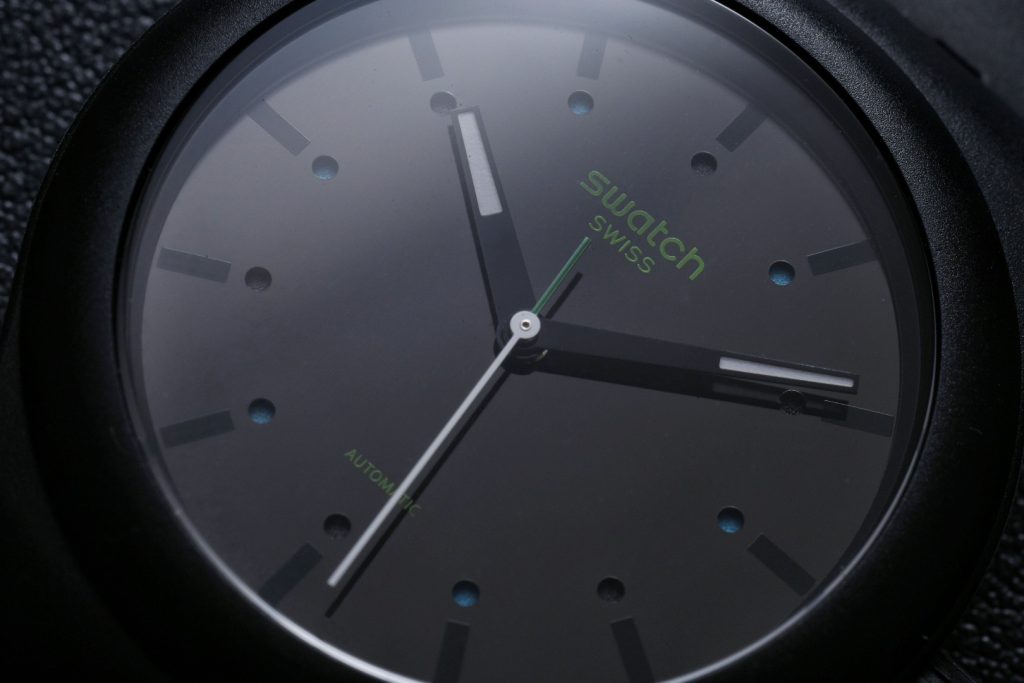 In darker environments, all you can see are the lumed hands against a glossy black dial, and then when there is more light, the dial features as described above are more visible. 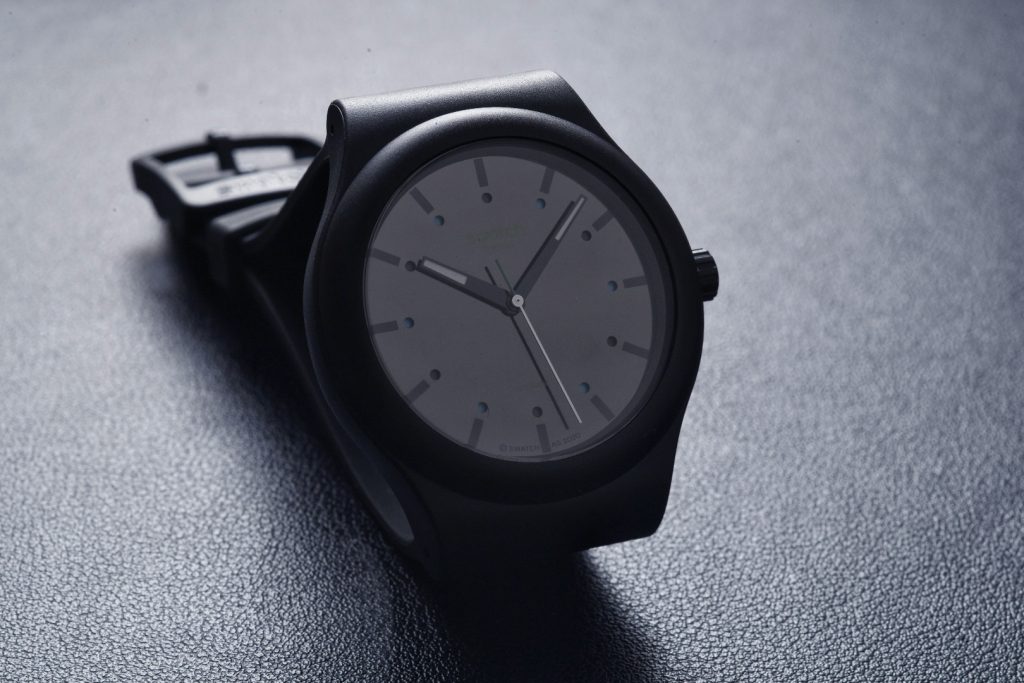 With the case, strap and buckle also in the black castor seed plastic, the whole watch feels purely about displaying the time and nothing else, which is quite minimalistic and beautiful. 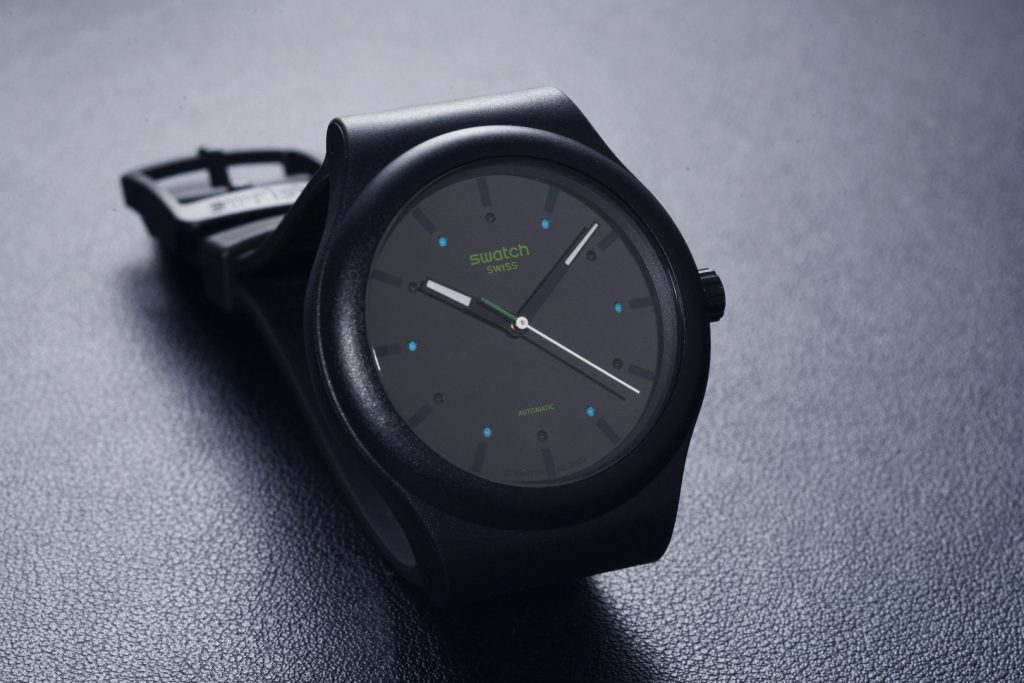 Certainly, it’s the kind of watch that can be a nice palette cleanser to others with more overt designs.

On the wrist, the watch wears comfortably even though its dimensions, if translated into stainless steel, might be off-putting at 14mm thick and 42mm wide without the crown and with a 51 mm lug to lug distance. I’d say however that anyone can wear this watch comfortably because it is so light, at 41.9 grams with stickers on. In fact, it seems lighter than a normal Sistem51, though I’ll have to check that and get back to you.

Of course, with the power reserve at a very healthy 90 hours, this is a watch that can become a part of your rotation, and can be swapped in and out while still running at moments when you want to pare down your wrist game. Or you can just enjoy that long power reserve for what it is if it is your only watch. 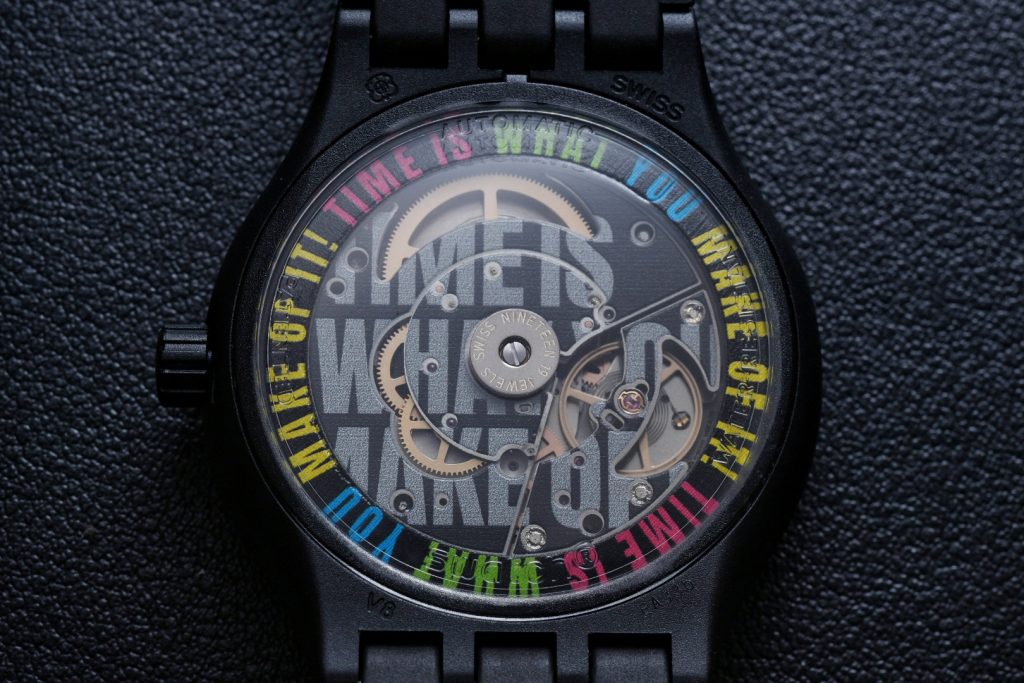 Round the back, the rotor, which might seem like a peripheral rotor but actually has a clear middle portion, allows a view of the mechanical movement of the watch, a more interesting one than that of the standard battery cover of the quartz based models. The view here is dominated by colourful graphic text that repeats the message, “Time is what you make of it”, which is a nice reminder to have overall considering that the main message of the watch is about the limit time we all have to reverse the gradual destruction of our environment. .

The design allows the balance wheel, winding train wheels, and the fourth wheel of the gear train that holds the seconds hand to be visible. And most importantly, a partial view of the skeletonized mainspring, which acts as a visual indication of whether your watch is powered up by how tightly coiled it is. It works as a power reserve indicator in a way, which is convenient to have since you can easily see how many winds you need to give it when you first pick it up. 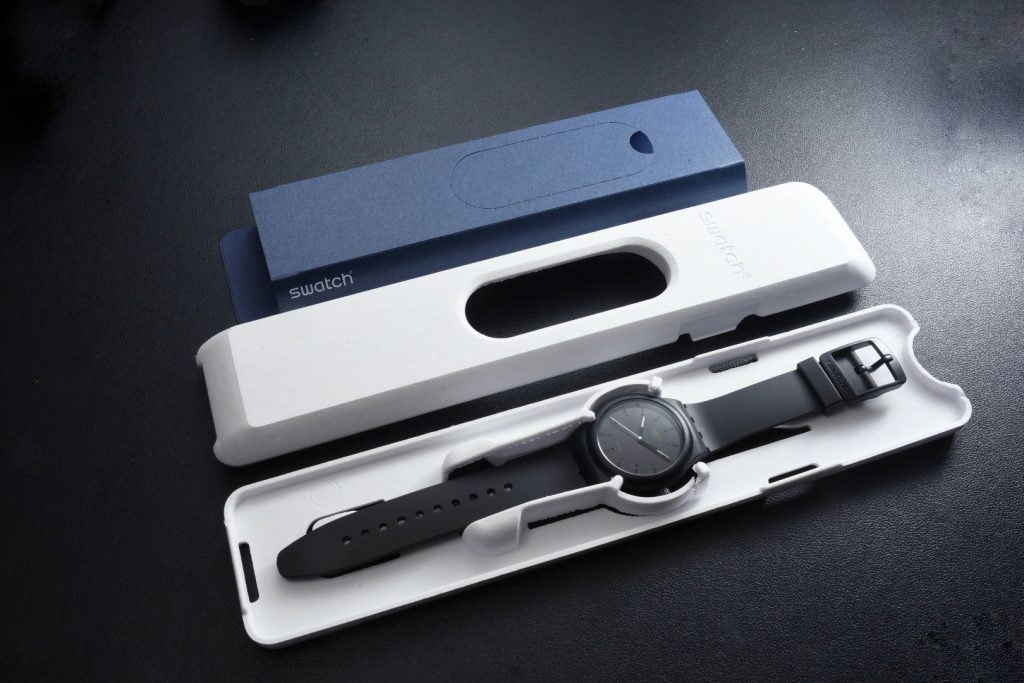 Rounding up the theme is the packaging that the watch comes in. It is a sleeve which holds two halves of what I would describe as a sort of egg carton material where the watch is placed. Round the back are the words “ Job done! Recycle or compost me.” which I suppose are instructions on what to do with the packaging, which further adds in the environmental credentials of the watch. 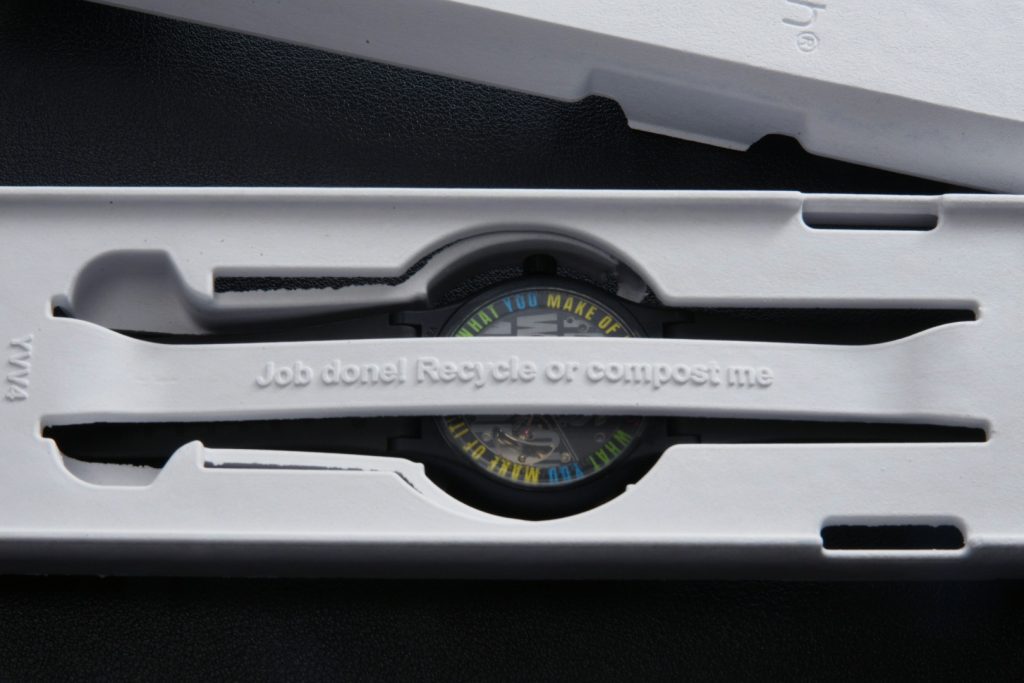 With quite a number of brands already making watches that benefit various environmental programmes, and making their cases and/or straps from plastic trash from the sea or other recyclable materials, it’s nice to know that you can be a part of the movement, and assuage your environmental guilt relatively cheaply with this Sistem51. 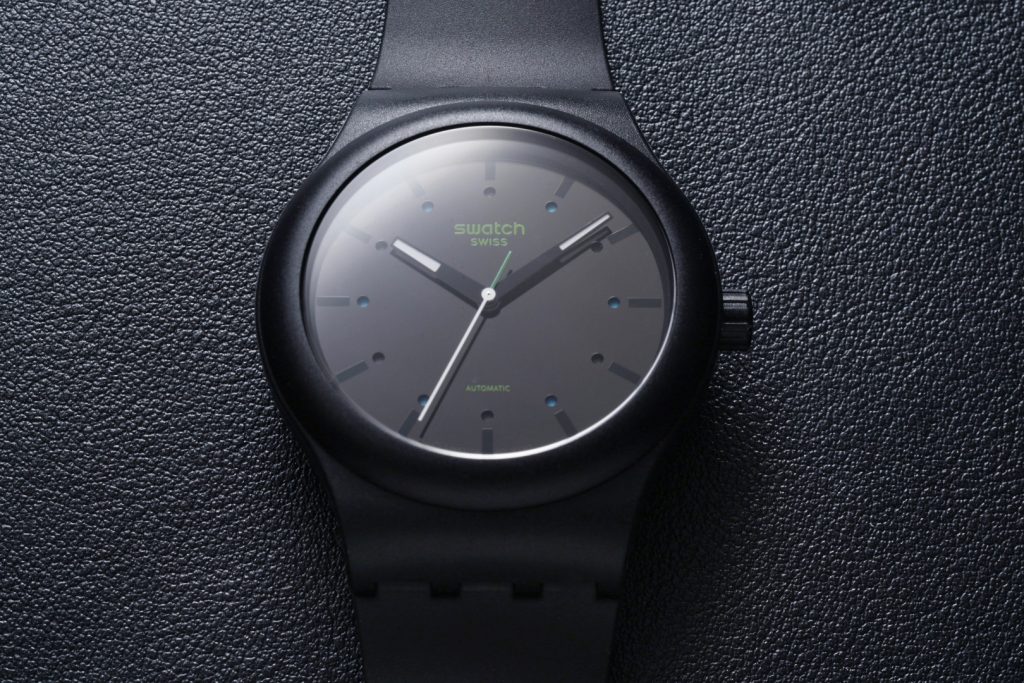 On another level, it’s nice to see a brand famous for being a purveyor of plastic watches, making a watch like this out of a new recyclable plastic. It’s a strong statement of how a brand can act responsibly and contribute to the global effort of making the world a better place. The watch itself, well, I’ve already mentioned how emotionally resonant the combination of the mechanical Sistem51 and the bio-sourced case and strap material is. In fact, it seems to be the best Sistem51 ever made in my estimation for this reason, and for its minimalist look that is a nice step away from the other more colourful designs available.

Find out more about this watch and the collection and purchase it online at at the link here.