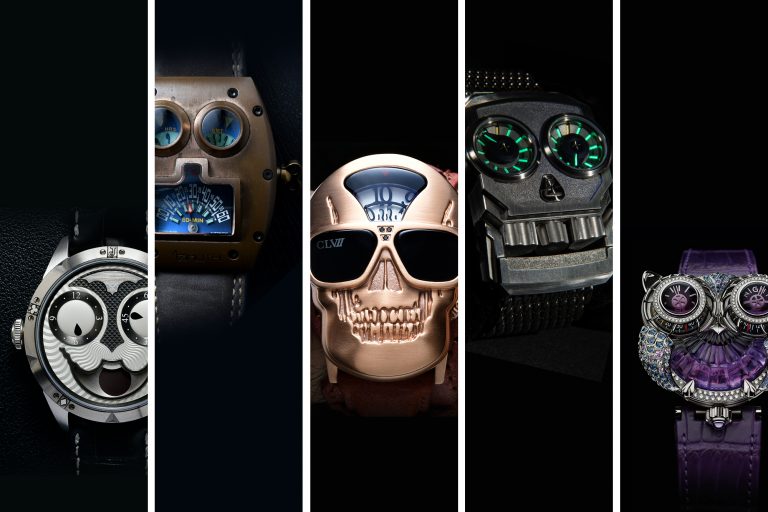 Watches that look at you – from Azimuth, CLVII, Konstantin Chaykin, Kopf and MB&F

It is said that babies are wired to look for and recognise faces. One can imagine, if this were true, how evolutionarily important such a tendency can be. Even as adults, recognising the emotions of those around us is vital for our general well-being.

This is why we see faces in random patterns and attribute human characteristics to the objects that we see them on. It is also a reason why when a face appears on a watch, our relationship to it changes.

I know this because my Azimuth Mr Roboto is not just a watch that tells me the time, it is also a friend that I have imaginary conversations with. Why?

A watch with a face can seem to stare back when you look at it, and it is easy to anthropomorphize it by giving it a name, a personality and even, whether jokingly or not, by speaking to it.

So it got me wondering if there were other watches that were similar to Mr Roboto in this regard. Intuitively of course, one might look to the many Skull type watches that exist, but I wanted to find watches that went the extra mile, watches that go beyond just sticking a picture, whether fancily made or not, on what is for all intents and purposes, a standard watch. As a result here are my criteria.

This means that something like the Fiona Kruger Skull fulfils the first and second criteria but not the third. Also, it goes without saying that all the watches on this list should be mechanical.

It was quite difficult to narrow it down, but here is a short list of watches that fulfil the criteria. Choose one of these and you’ll have a friend who will tell you the time and even maybe talk to you when you need some company.

The Joker from Konstantin Chaykin has to be the most emotive watch on this list, and that comes not just from the way the eyes look independently in all directions – depending on the time, but the details that give it a playfulness. This is the brand’s most memorable and shall I daresay – iconic – watch, and it comes from the unique vision of Konstantin Chaykin himself, who has managed to come up with a collection of watches, apart from this one, that all have something special about them. The version shown here, is a unique piece, nicknamed, “The Mime”, and all monochromatic themed version that was made for Singaporean collector @watchinery. Other variations with interesting themes are also available as seen below.

The complication is achieved by adding an 8 jewelled module on top of the ETA 2824-2, dividing out the hours (left) and minutes (right) to each eye, and then adding an additional crown at the 9-o’clock position with recessed corrector for correcting the moon-phase display that is shown by the tongue as it moves across the mouth.

It is easy to tell the time with this watch, and it is probably also the easiest to react emotionally to it, since the way that the eyes move can make the Joker’s face look crazy, calm or serene at different times.

As proof of how unique the vision of Konstantin Chaykin is, look no further than the watch he made for Only Watch 2019, the Joker Selfie, which is essentially a self-portrait of the namesake watchmaker. Look for the distinctive beard and eyebrows that decorate this piece, and also a very unique additional complication hidden in the left eye which wears a watchmaker’s loupe. When worn on the wrist and flipped up towards the wearer to read the time, the hidden secret hour is revealed.

Find out more at www.konstantin-chaykin.com

The Azimuth Mr Roboto, compared to the aforementioned Konstantin Chaykin Joker, has a more stoic appearance, and that’s on account of the indications that do not seem to move as much. It’s a robot after all- what do you expect?

In Mr Roboto, the robot eyes contain rotating discs that display the current hour (left) and the dual time zone (right). Retrograde minutes are handled by the robot’s mouth, while seconds (to mainly indicate that the watch is running) are shown by the rotating red triangle which is the robot’s nose. This is a watch that is potentially useful for travellers since you can independently change your second time zone as you would any dual timezone watch.

This watch was inspired by 1950’s lantern robots from Japan and it shows – even the crown is a large key that one can imagine winding up your lantern robot with, as you would do with this watch.

The main criticism that came with this watch was that the time was a little difficult to read, given that the hour indication in the eye was too small. That was what prompted the release of the second version, Roboto 2, which had a bigger case with bigger eyes and a bigger mouth. It does solve the readability issues of the first version, and it makes the robot have a different look. There are fans for either, but my preference is for the first version, since I don’t really wear Mr Roboto to tell the time.

Find out more at www.azimuthwatch.com

Now this is a watch that is relatively affordable, offering a design that fulfils my criteria and has a great wrist presence to boot. Offered by high-end French street wear brand, CLVII, it uses its distinctive logo as the face of the watch – a skull wearing sunglasses. Interestingly the brand name – CLVII – are Roman numerals for the the number “157”, the number of the shop on 157 rue du Faubourg Saint-Honoré in Paris that founder Julien Léonard, established the brand in June 2007.

Don’t go running there however if you want to visit though, as the store has since relocated to 93 rue de la Verriere in Paris.

The CLVII Skull watch is a distinctive watch for sure, and though it stands tall at 18.5mm thick, the articulating lugs on the case help to make its 51mm length manageable on small wrists.

The time is told with rotating discs in the aperture of the skull’s forehead, that tell hour and minute as referenced by the red triangle. Running seconds are also included to indicate that the watch is running.

To keep the price manageable, the CLVII Skull runs an automatic Seiko movement, that just proves that inventive horology can come from a simple movement if the concept is done right.

Buying the CLVII Skull Watch is also a treat when one looks at the packaging, which is basically a black plastic skull from which you can retrieve your watch. They even give you a nice CLVII cap for you to wear to complete the look with the watch on your wrist.

The watch is available online at the CLVII website, or from our friends at Watch Wonderland (https://wonderland.watch/) in Singapore.

Find out more at Time in France

In my research to find watches that fit my criteria, I came across this one that seems to look a bit of both a robot and a skull.

The Kopf Concept Skull Watch is an interesting looking one for sure and it comes from the mind of master watchmaker and vintage watch restorer, German Polosin, who operates out of Bristol in the UK, and Moscow in Russia.

Similar in concept to the Konstantin Chaykin Joker, the eyes show the hours and minutes in such a way that readability is not compromised. Even at night, the time is easy to read since the dial and hand pointers are lined with self illuminating tritium tubes. Aside from that it’s the case design that makes the Kopf Concept so intriguing. The articulation in the case comes at the jaw of the skull, making wearing on the wrist easier. This portion also hides the crown in and among the teeth.

Only 100 pieces of the Kopf watch will be made and each will have to be pre-ordered. This allows owners to select the materials from which the case will be made (18K gold is offered as well), as well as the serial number, and engraving for initials.

The Kopf Concept Skull can only be ordered from Polosin via the website at what is frankly a reasonable price of 4560 GBP for 2020, with the price rising to 5400 GBP in 2021.

Find out more or order one at http://kopf.watch/ 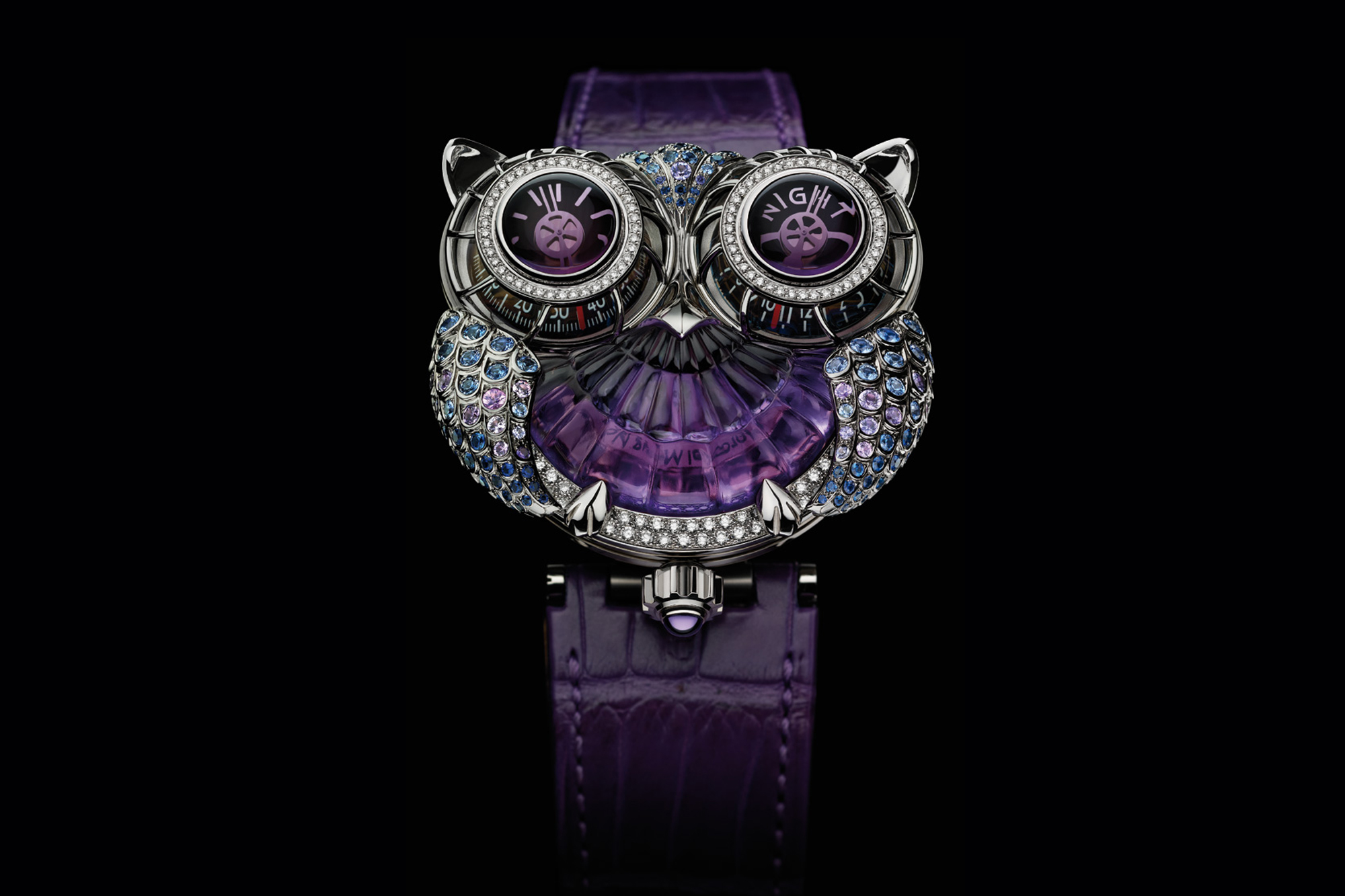 The Jewelry Machine is a watch that I’ve seen in person only once, and it was an experience to remember since it is even more impressive in the hand than in the pictures that you see here.

There are two versions available but the one I saw, the Jewelry Machine Purple is a mesmerising exercise in high jewelry, courtesy of a collaboration between MB&F and famed jeweller Boucheron. 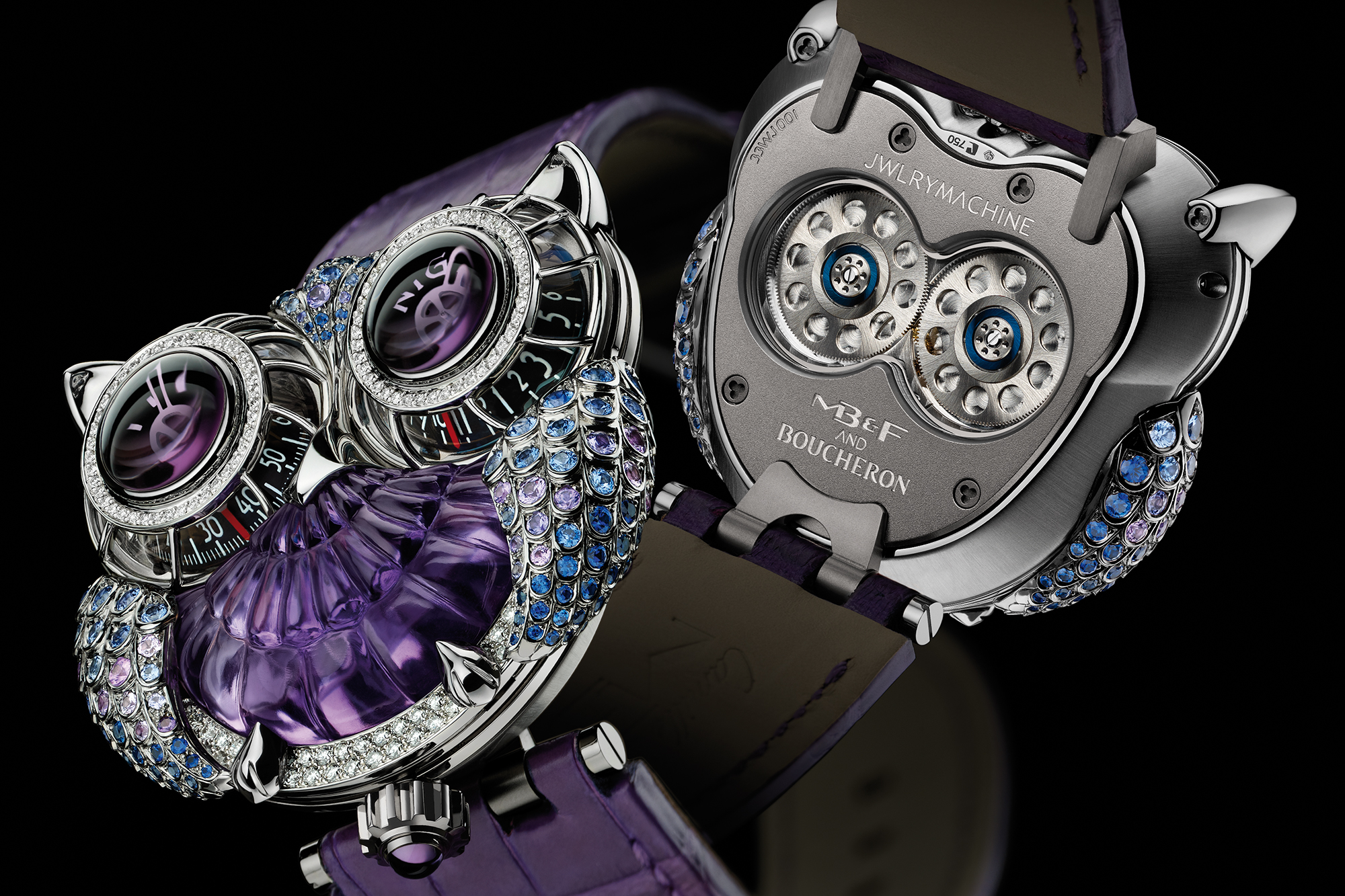 What’s really surprising about this watch is when you consider how thoroughly transformed the Horological Machine No.3 or HM3, the underlying chassis of this watch, was.

Now I know that this watch is unlike the others in this list so far, that have a humanoid face. Even though this watch is an owl instead, it still does have a face and it still does look at you, and it goes one better by having the case as the entire body of the owl, instead of just the head.

Why an owl then? Well, aside from the obvious symbolism and its distinctive looks, the practical reason must be because of its big eyes, that proportionally allow the time telling cones of the HM3 to work aesthetically. With the hours and day/night indicator on one cone and the minutes on the other, telling the time is not an issue with this watch. Although you probably won’t be buying it for this reason.