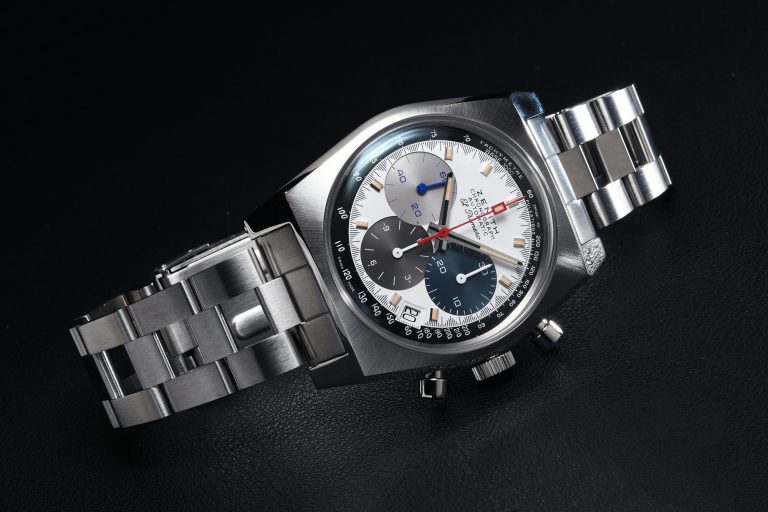 Zenith’s modern heritage is inextricably linked with the El Primero, and how it changed the game for chronographs in 1969. The brand continues to honour its heritage with the release of the Chronomaster Revival A3817 –  a boutique and eCommerce exclusive model first unveiled in 1971 that combines the classicism of the original 1969 releases with the sportiness and funkiness befitting a model of the 1970s.

The A3817 model was originally released in 1971, 2 years after the first release of watches containing the El Primero movement. Amongst aficionados of vintage watches, only 1000 pieces of this particular reference were produced, making it a rare bird indeed for those seeking an original.

The Zenith Chronomaster Revival A3817 is, as the name suggests, a revival of this model, with a lot of effort paid to making this as close to the original as possible. Zenith’s product development team utilised blueprints from the era as well as reverse engineering to replicate aspects of the watch such as finishes and dimensions.

Like the original, the watch features a stainless steel case and a white lacquered dial with the signature coloured subdials in tones of grey and blue, as well as the radial brushing on top of the 37mm tonneau shaped case that appears to emanate from the centre of the watch. A peculiarity of this watch is the coloured markers of the 9 o’clock subdial for the running seconds counter – this is further accentuated by a blue hand in contrast to the chronograph hands that are white.

On the periphery of the dial is the tachymeter scale that also incorporates a pulsometer – adding further functionality to this watch. The vintage vibes continue with the “shark tooth” pattern for the seconds markers of the chronograph – this was originally done to aid legibility back in the day.

Visible through the display back of the watch is the El Primero 400 Automatic movement, one that has virtually remained unchanged since 1969 – fitting for a watch meant to pay tribute to legendary models of the past.

The watch is available on the revival model’s signature “Ladder” bracelets that are a recreation of the Gay Freres bracelets of yore, or on a light brown leather strap that develops a patina as the watch is worn.

Available only at boutiques and Zenith’s eCommerce platform, the Zenith Chronomaster Revival A3817 retains the rarity of the originals, given the presence of boutiques in exclusive locations.

Zenith should be rightfully proud to display its heritage as one of the first makers of the Automatic Chronograph – to do it in a way that they have, as well as it lasting over 60 years is a testament to the foresight of the company’s movement designers and engineers. With the Chronomaster Revival A1817, the watch not only retains its exclusivity like models of the past, but it also rounds out a collection paying tribute to models that formed one of the pillars of modern watchmaking in the 20th Century. For a brand that was quietly responsible for the popularisation of the luxury sports chronograph, it is only fitting that the Zenith Chronomaster Revival A3817 be as true to its roots as humanly possible, to exhibit a company in a golden age of watchmaking.