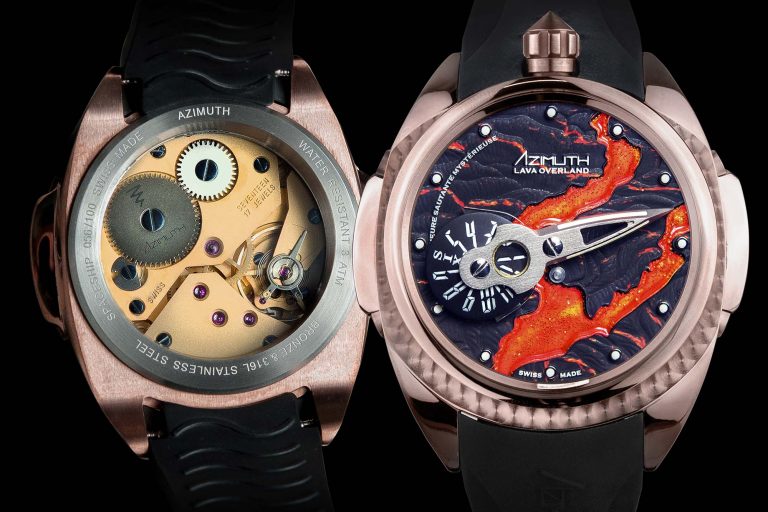 Over last 18 years, Azimuth has produced a range of wildly exotic timepieces characterised by distinctive designs and unconventional displays. Without a doubt, conceptual watchmaking has hit new highs in the past decade, but it bears remembering that the brand was an early proponent in the field, championing such designs when the genre was still in its relative infancy as well as becoming the forerunner of the local watch scene in Singapore.

Drawing inspiration from a bewildering variety of sources from vintage cars and robots to space exploration, Azimuth watches are designed and conceptualised in Singapore while the movements are customised and assembled in the brand’s workshop in Neuchâtel, Switzerland. The use of modified ETA movements has enabled them to offer avant-garde designs at reasonably affordable prices.

Amongst the brand’s most unusual timepieces is the Spaceship SP-1 Mechanique that was launched in 2007. It features a jumping hour disc, itself resembling a spacecraft, mounted on a large, sculpted minute hand.

The entire display traverses across the dial under a massive sapphire crystal dome, inspired by the profile of a spacecraft. The paradoxical combination of a digital and analog display in the watch has made it one of the brand’s most intriguing models.

Since then, the Spaceship has spawned numerous variants including one with an aventurine dial, which creates an impression of a starry sky. Subsequently, the brand introduced the Predator, incorporating a skeletonised ETA 6497 movement that further enhances the futuristic theme of the watch.

This was followed by the Predator 2.0 in 2019. It featured an enlarged, angular two-part case made up of an inner capsule and an outer chassis with lugs – essentially the Predator on steroids. Additionally, the plates and bridges of the Unitas movement are made of aluminum to keep the weight of the watch in check as well as offer several different coloured variants.

This year, the brand has unveiled the 100-piece limited-edition Spaceship Predator Lava Overland that is distinguished by a bronze case paired with a hand-painted enamel dial, depicting a lava flow.

Measuring 43mm in diameter, the case is made entirely out of CuSn8, or phosphor bronze, an alloy that is 92% copper and 8% tin. In contrast to aluminum-bronze alloys, phosphor bronze is slightly reddish in colour and develops verdigris over time as a result of oxidisation.

Like the original Predator 2.0, the case has a complex two-part construction with a sloping profile. It is substantial in size and sits higher at 12 o’clock for easier viewing. It is predominantly polished but features perlage decoration on the top surface of the case.

But the most striking aspect of the watch is the enamel dial that depicts flowing lava illuminating a dark landscape. Each dial is painted by hand, and as a result, no two dials are exactly alike. Given the complexity of the dial, the large hour numerals in the standard model have been replaced by circular lumed markers.

At the heart of the watch is the ingenious jumping hour mechanism that is mounted on a massive minute hand. It relies on a uniquely designed spring that holds a 12-point star hour wheel in place. When the entire hand pasts 12, it interacts with a stud on the dial and flips the hour by one position. This is a simple yet clever and reliable solution to achieve an orbital jumping hour display.

Powering the time display is the Unitas 6497, a robust, large-diameter movement originally conceived for pocket watches. Referred to as “Lepine”, the 6497’s small seconds is directly opposite the crown which thus allows the watch to retain a small-seconds at six o’clock while the crown is positioned at 12. Its large diameter lends itself to a high-torque mainspring, making it an ideal canvas for such a complication.

To complement the earthy tone of the watch, the movement plates and bridges have been bead-blasted to create a smooth, finely grained surface and finished in a bronze colour.