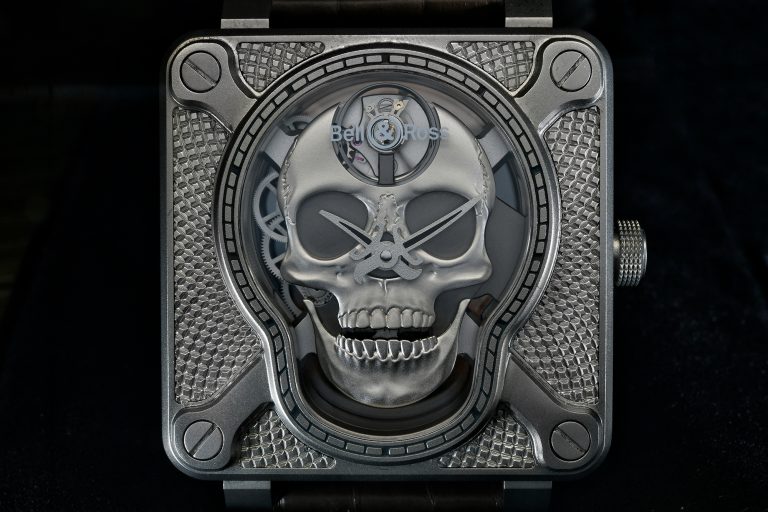 Skull motifs in watches appear every now and then, and it is easy to see why when the function of the object that they appear on is to measure time. The link between time and one’s mortality is something that everyone considers, and the frequency increases with each passing birthday, marking a milestone most definitely, but also reminding us at every moment of how we inch towards the time of our death.

Out of all the watch brands around, the devotion of Bell & Ross to the skull motif has certainly been one of the most fervent and long-standing, with four variations since 2009 with the motif set against the backdrop of the iconic square shaped BR 01 series of watches. In fact next year in 2019, it will be the 10th anniversary of the skull motif for Bell & Ross, and considering the watch we are dealing with today, the Bell & Ross BR 01 Laughing Skull, which reaches a high level of appeal already, what we can expect after this will surely be amazing.

But first let’s have a look at the BR 01 Laughing Skull, which was launched this year at Baselworld and represents the apex, in my opinion, of their line of skull watches, since it moves for the first time beyond mere aesthetics, including a complication in conjunction with the skull motif.

This conclusion is easy to arrive at when one just considers the four watches that have already been made, the BR 01 Skull (2009), BR 01 Tourbillon Skull (2011), BR 01 Skull Bronze (2015) and the BR 01 Burning Skull (2016), that were merely different aesthetic decorations on the case and dial. Of course, we saw with each model, an increasing elaboration of the decorative features of each watch, as if an evolutionary imperative was guiding the series towards ever increasing amounts of boldness.

Starting with the relatively plain and straightforward BR 01 Skull, BR 01 Tourbillon Skull and BR 01 Skull Bronze (2015) featuring their skull motifs in relief against the background of the dial, the series moved on to the more complex and highly engraved BR 01 Burning Skull. This had a skull which was more realistic and three dimensional, with the boldness quotient supersized with the use of of black lacquer in the recesses of the case engraving, reminiscent of the ink used by tattoo artists. 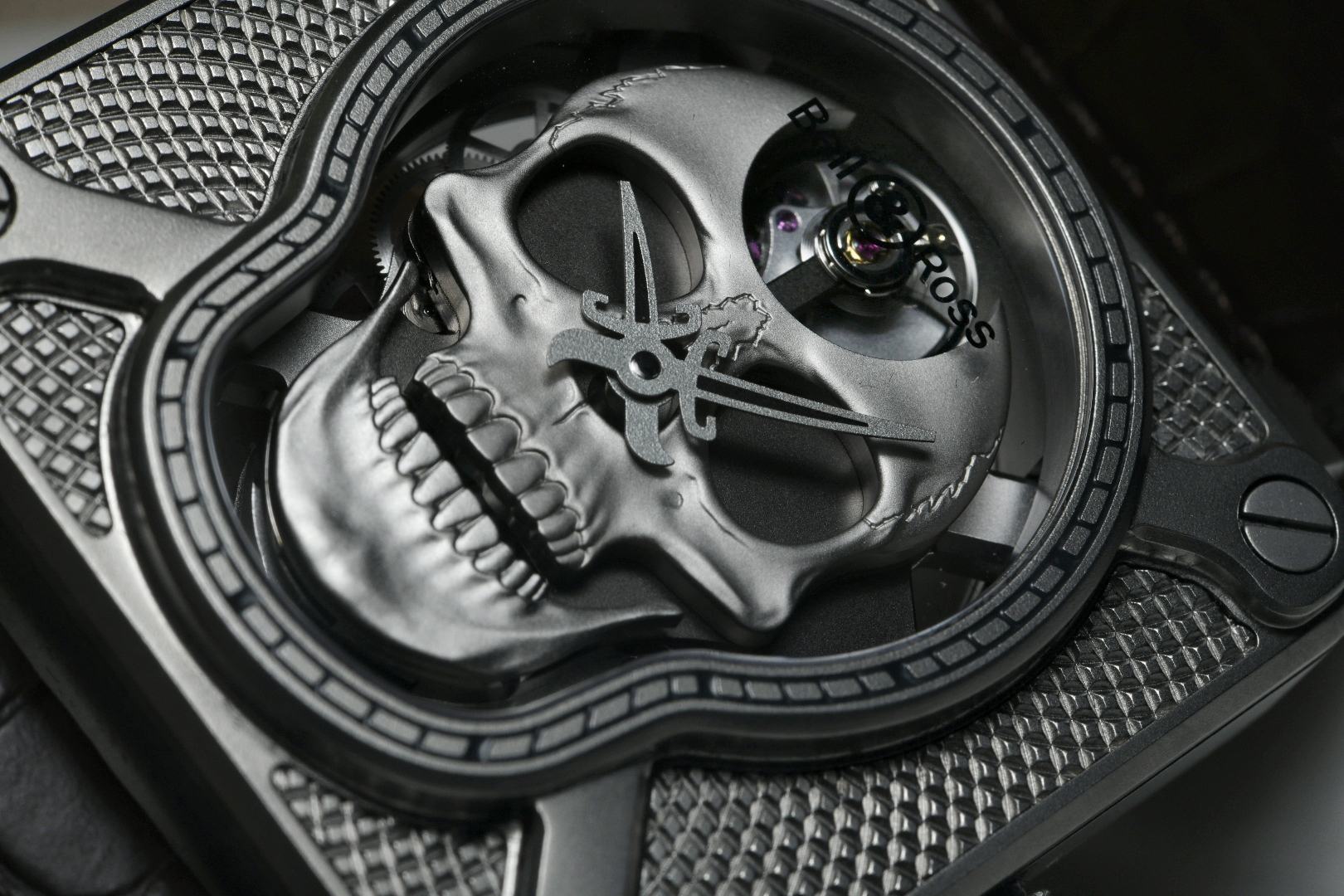 The BR 01 Laughing Skull however, departs from this playbook, and attains a whole different level of coolness, being an evolved form that is very much unlike the others that preceded it. You could say that it is akin to the appearance of those prehistoric fish that crawled out of the water a long time ago, the first important step in the beginning of the evolutionary lineage of our human species today. 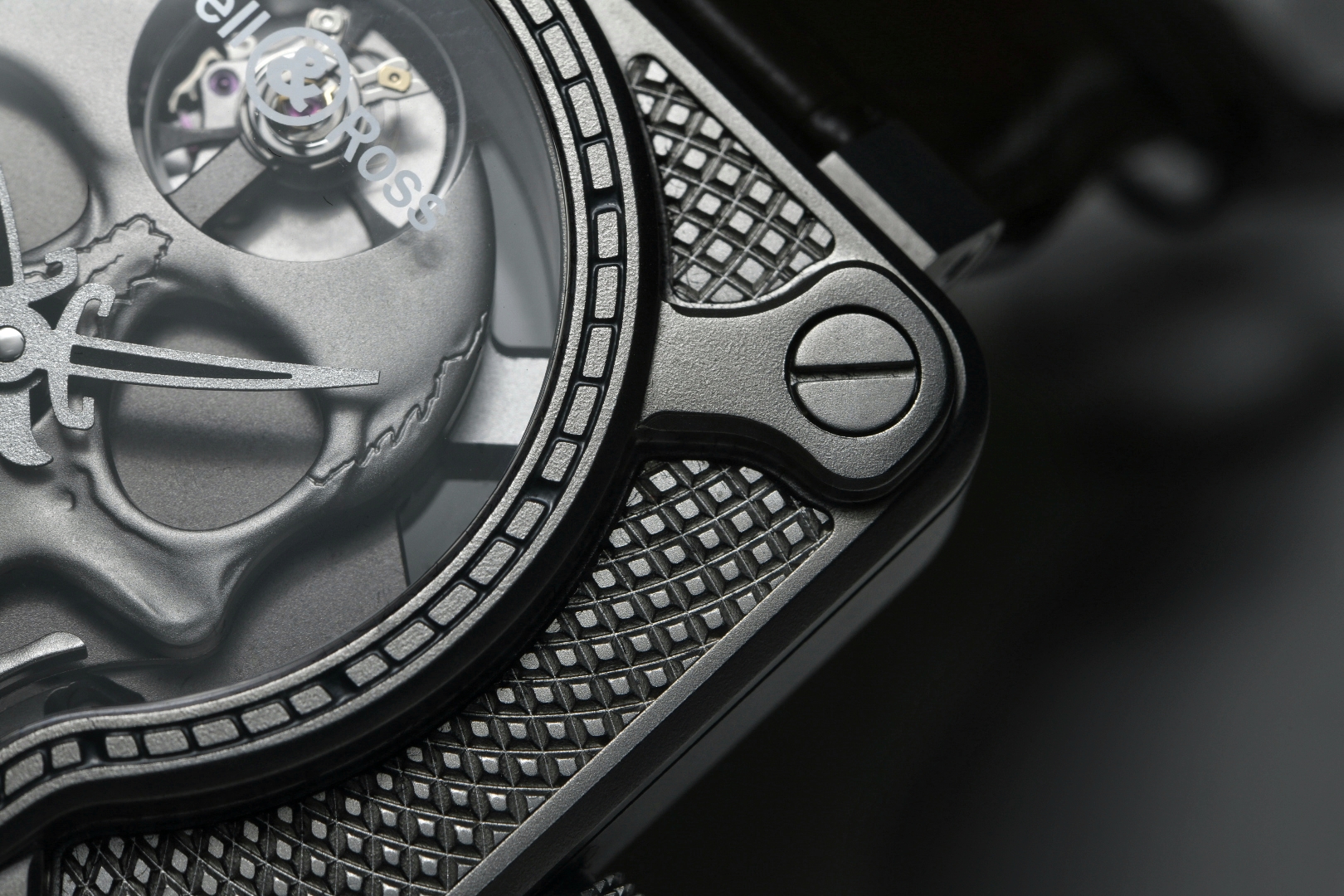 Why the hyperbole? It’s obvious when you look at the watch that it is vastly different from all the others. For a start, the aesthetics are better, with an even more 3-dimensional skull than the BR 01 Burning Skull. Then we notice that the skull portion of the the watch is supported by the four crossbones, suggesting the use of a brand new movement that is shaped like a skull. This hypothesis is confirmed as we notice the front-mounted balance wheel that we find at the forehead of the skull.

At this point, the watch has already done enough to impress, but the main surprise is yet to be revealed, until we go a little later to wind it. It is at this point that you realize why the name of “Laughing Skull” was given to the watch, since it is with every turn of the crown, one sees the mandible (lower jaw) of the skull moves up and down when you wind the watch.

Leave the jaw at a certain position, whether mouth wide open, closed or anything in between, and this is the state that it will remain as your wear the watch. 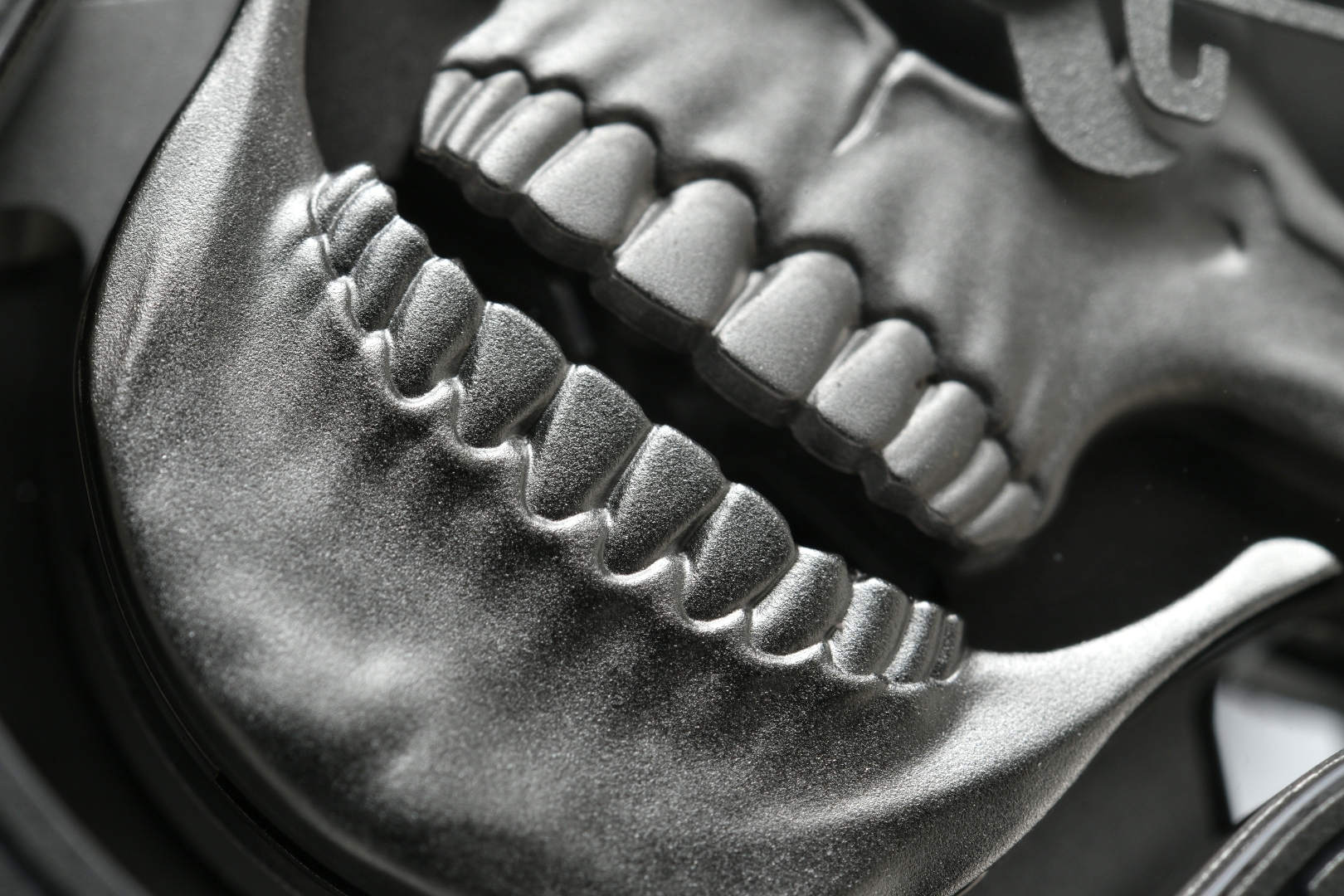 Certainly there has never been anything else like this that I have seen in horology and it is the interactive aspect of the watch with the possibility to place the jaw at any position that allows quite a bit of fun to be had. Perhaps you can move the jaw to a different position in line with your mood for the day.

Just to be clear of course, this complication is not an automaton, as some might be tempted to think, since an automaton requires that the action happen automatically. In this case, the mandible moves only by a deliberate action on the part of the wearer. Logically speaking however, the fact of the BR 01 Laughing Skull appearing this year with what it can do, does suggest a possibility that the next version of a skull watch might better these capabilities. Who knows, perhaps we will see a true automaton in the new watch, although I would be quite scared to think how much that will cost compared to the utterly reasonable price level of the Laughing Skull. 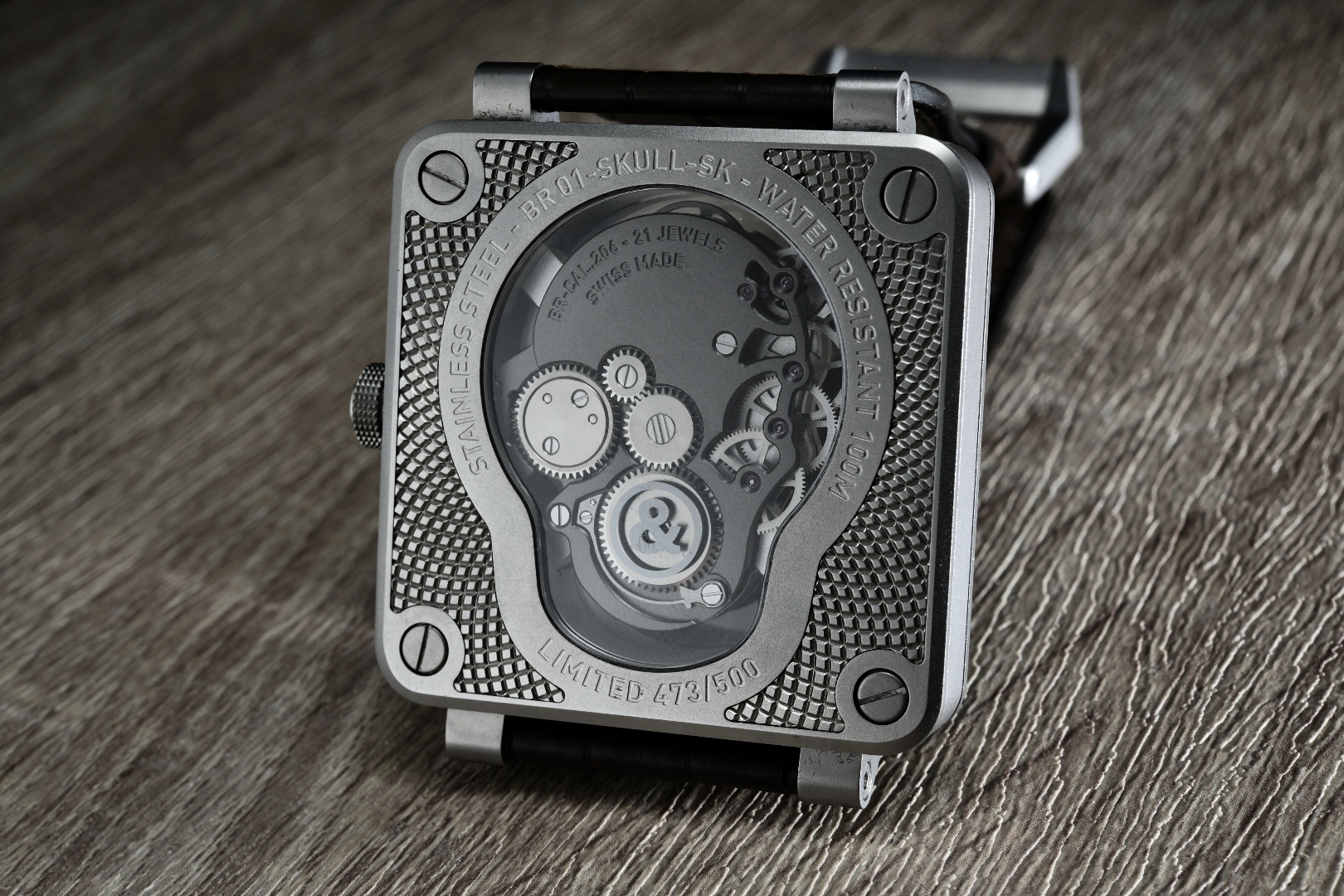 Making the entire package even better is the new in-house BR-CAL.206, a skull-shaped calibre supported by 4 bridges that “extend” from the crossbones in the case to the main plate in a single assembly. In fact one can see the outline of the skull shaped movement from the front and the back that seems float in the centre of the watch. Kudos to Bell & Ross for presenting a complication like this in a new movement, and doing it the correct way, since making a skull shaped movement from an off-the-shelf one is well nigh impossible. 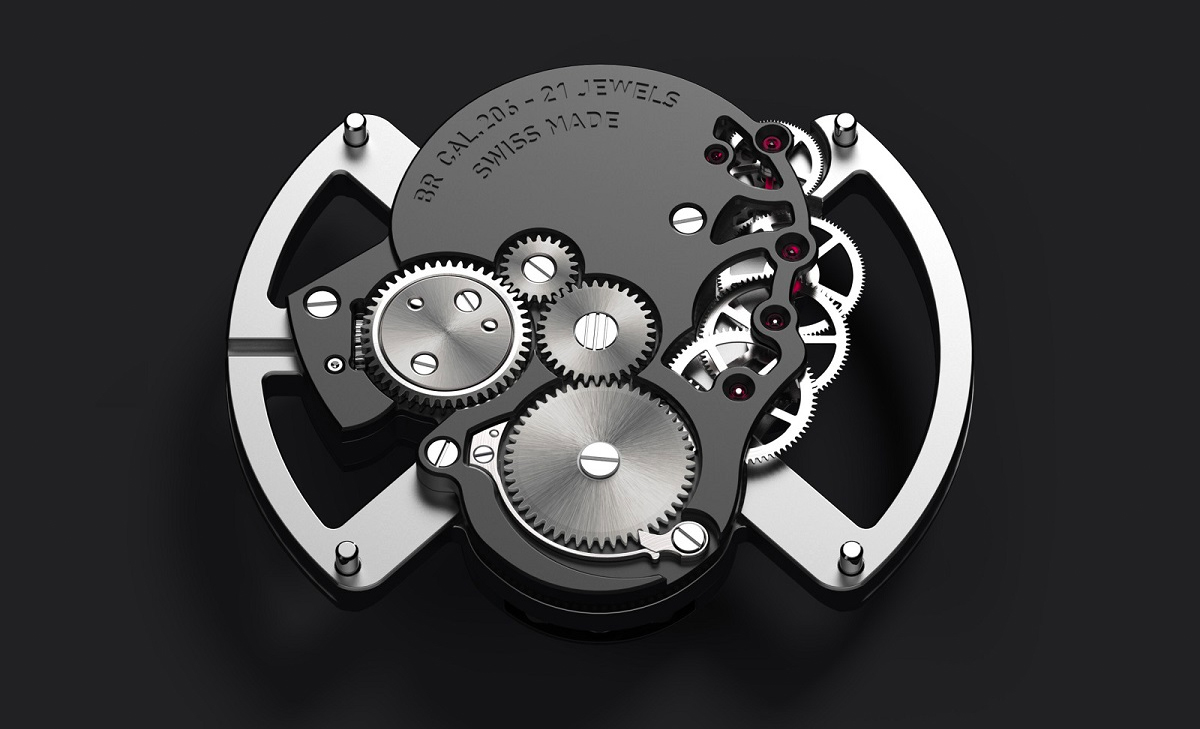 On the wrist, the watch is large as you would expect from members of the BR 01 series, with a satisfying heft and the no-nonsense slab like posture of the square case making it much more noticeable. Combine the aesthetics and the complication that the watch carries and there’s no doubt in my mind that for now, this is the best version of a Bell & Ross Skull watch thus far.

At this point one can only look to the 10th Anniversary of the Skull series of watches next year to see if this effort from Bell & Ross can be surpassed. It’s only going to be a few more months till we know, and I’m certainly looking forward.

The Bell & Ross BR01 Laughing Skull is limited to 500 pieces.