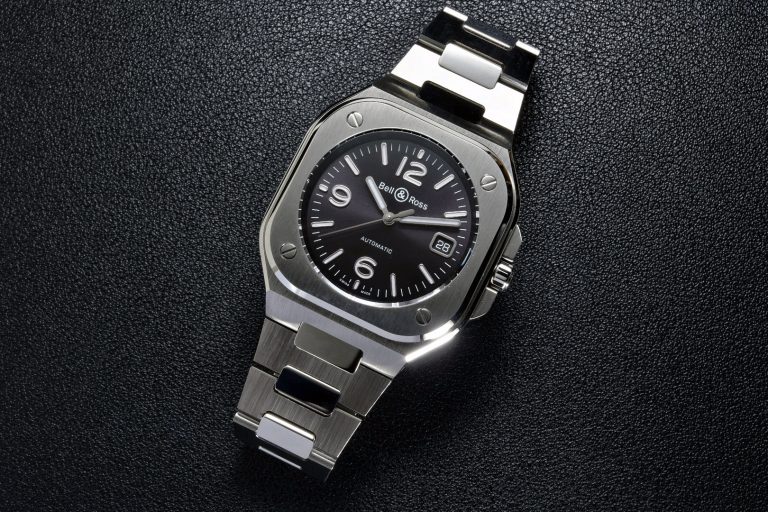 Hip to be square

If there was a brand that could be associated with the shape of the square for their watches, that brand would be Bell & Ross. No other brand has so decisively owned the shape since the launch of the BR-01 in 2005, with the bold design quickly gaining iconic status and popularity among the watch buying public. Indeed the BR-01 and the other square cased collections that have come after it, seem to make that well worn industry cliche – that it is difficult to sell a non-round watch – not apply to Bell & Ross.

So now Bell & Ross has decided to expand its offerings by giving us something new – a fresh take on the square case that now comes on an integrated bracelet. 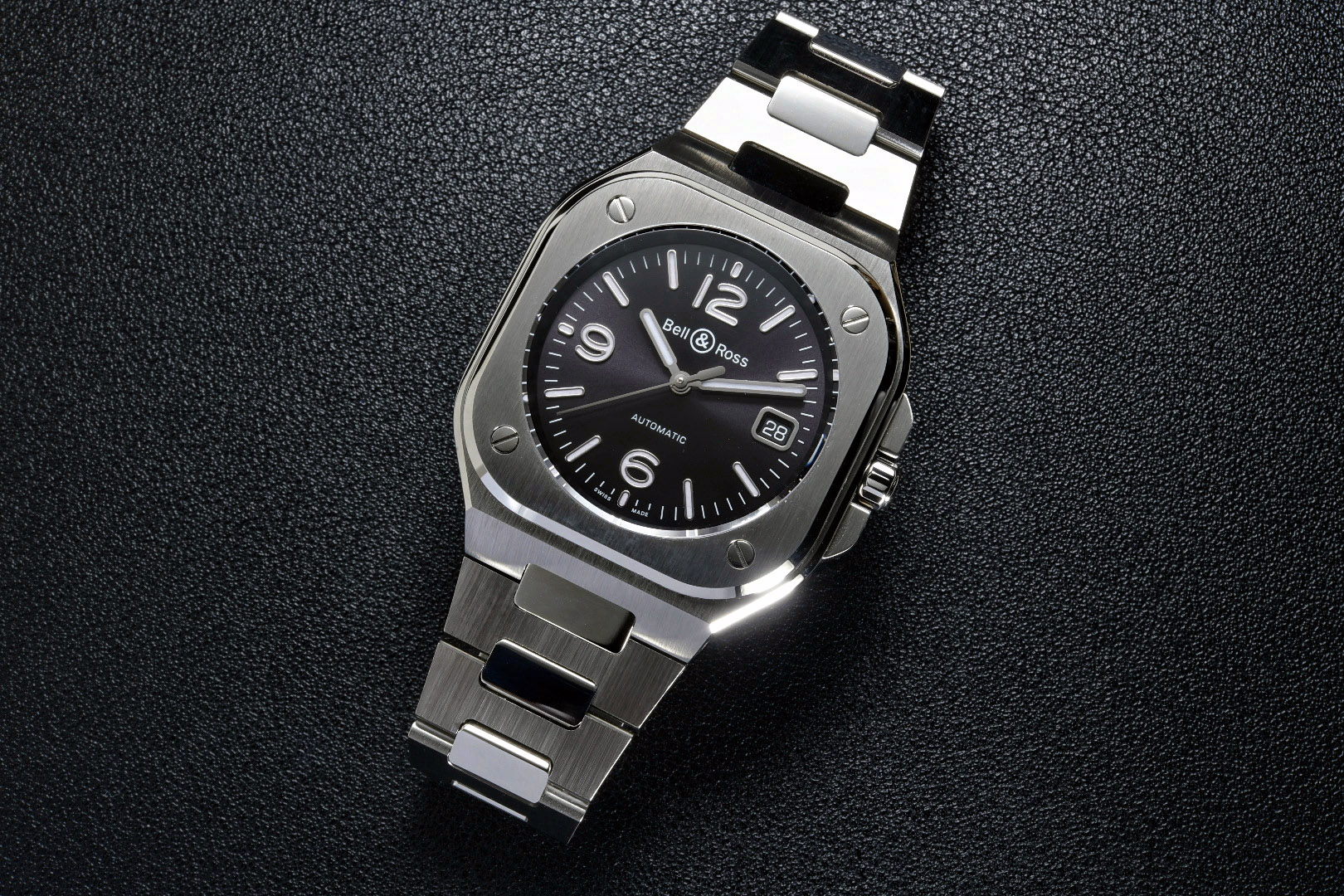 It seems that quite a few brands have been launching watches on bracelets recently, and it might just be the start of a new trend. I can see why it makes sense. Bracelets are easier to take on and off and they are water resistant. Also, if designed properly, they can become the foundational ingredient of a new brand icon.

Just think of some prominent examples that we know of, like the Audemars Piguet Royal Oak, Rolex Oyster, also the Patek Philippe Nautilus. These are watches in which the design of the case and bracelet comes together to make the entire iconic look of the watch.

On the flip side however, a bracelet is not easy to do well. From an engineering standpoint there are multiple factors to consider – how it integrates into the case and whether is is comfortable to wear, not to mention that it has to look good as well.

So, have Bell & Ross succeeded?

Making a case for strength

At first glance, it might seem that Bell & Ross have merely placed one of their current square watches on a bracelet and called it a day. Yet, look closer and you’ll realize that quite a lot of details are different. Of course, the case of the new BR-05 follows largely from the same basic ingredients as the case of the BR-01, but there are notable differences.

The basic ingredient of having a circle (the dial) within a square (case and bezel) persists. However with the BR-01, the edges of the circle touch the square, with the square itself being rounded only near the edges, which largely preserves the squarish look.

The BR-05 by contrast comes across as a softer and rounder variation of the aforementioned. The rounded edges of the square case have their curves starting earlier from the middle of the edges, making the case look less square and rather more like the shape of a vintage TV. Also, the circle of the dial is smaller in proportion as compared to the BR-01, giving a larger and more prominent bezel.

That being said, this rounder look is contrasted sharply with the mid-case, which has an angular edge that runs to the integrated lugs, giving the watch a modern feel. This angular look also extends to the crown guards, a design touch that come from the more recent BR-X1 collection.

The dial as well is handled in a similar fashion, being recognizably Bell & Ross, but with many key parts bring rounded as well, these include the hour markers, the Arabic numeral font, the date window, and even the hands that depart from the sword shape of the BR-01, to elongated and rounded batons. Also, imparting a feeling of elegance are polished edges that are visible throughout that encircle the aforementioned dial elements.

The bracelet itself is brushed but made up of large links with polished center pieces and uses screws for fine adjustment. The bracelet, I must say, is very well made as I would come to realise when adjusting them for my wrist during my hands on time with the watches and for photographing a wrist-shot, I found that they were machined so well that the process was very easy. It’s the little things that are not so easily seen, that can only be felt when interacting with the watch. I would say that this level of quality extends throughout the case as well. 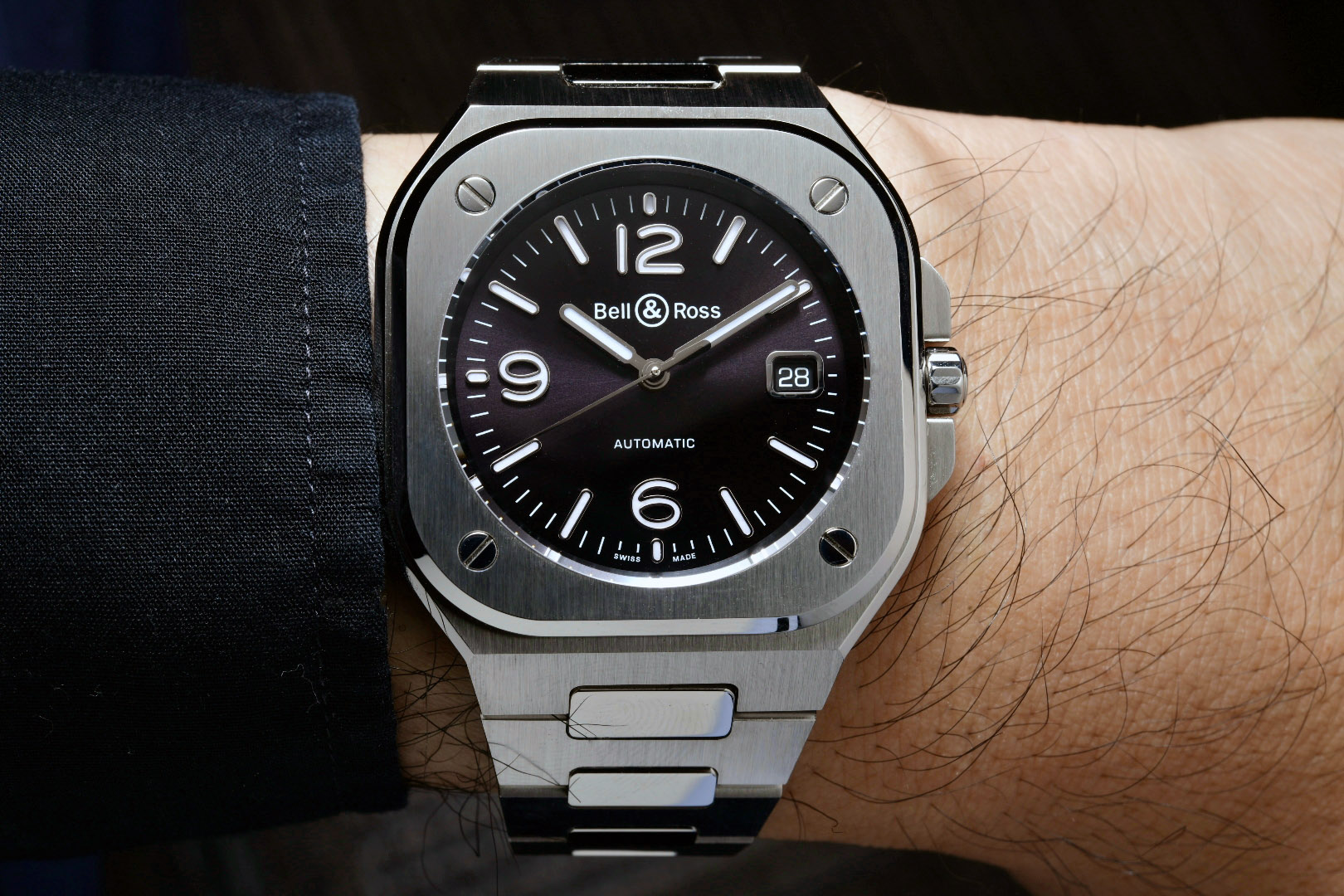 On the wrist, the flat slab like design, coupled with the flexible bracelet as well as the 40mm size of the case combine to make a watch that wears well, and securely. It was a good move to stick to a 40mm case, as it is a good everyday size that can suit men or women, and it’s also not so big that it makes the combined weight of the case and bracelet too heavy. That and also how it fits in with the vintage aesthetics that the design brings to mind. I think that 44mm is probably the upper limit of comfort if Bell & Ross launches a bigger model in the future. 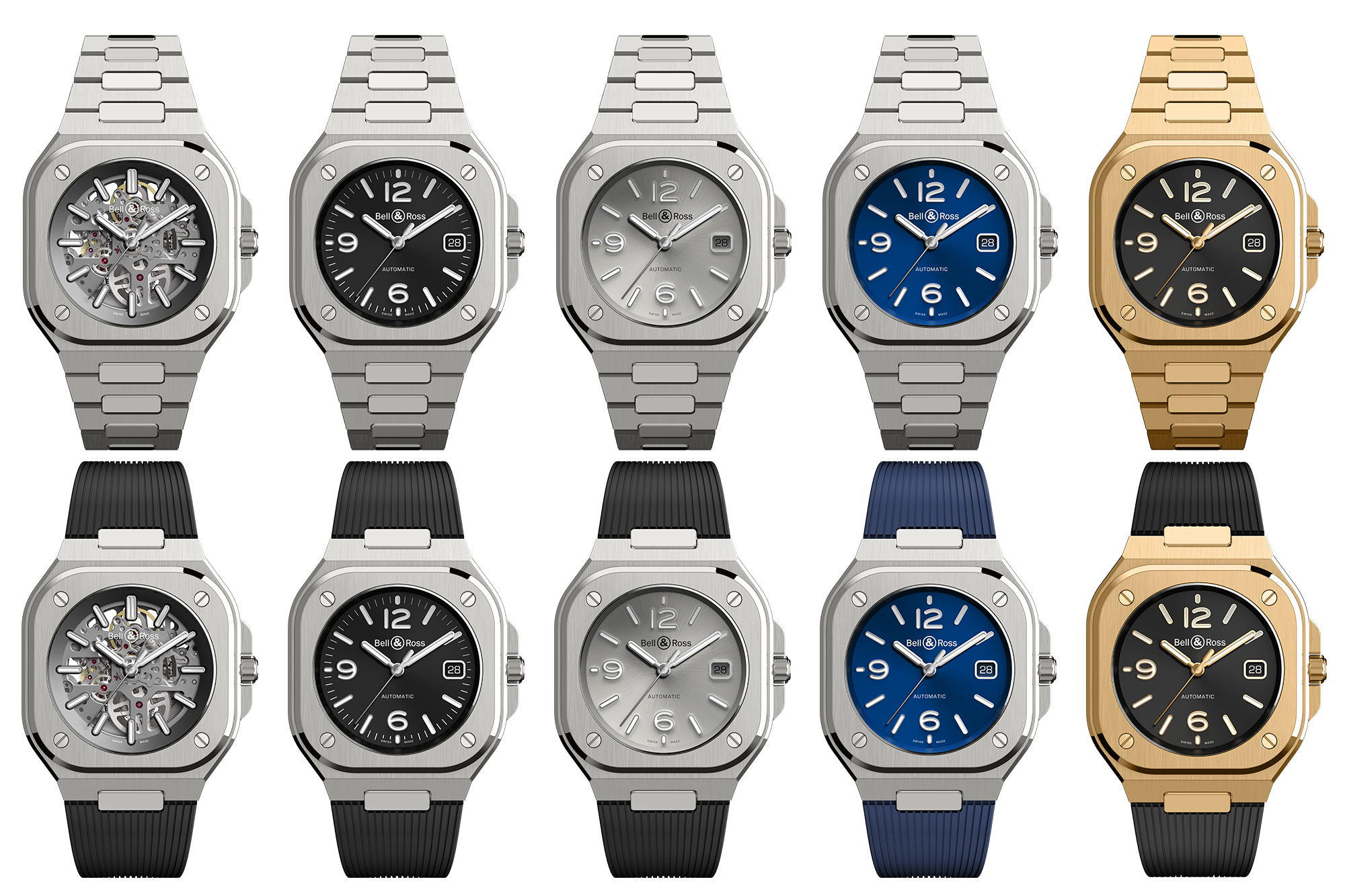 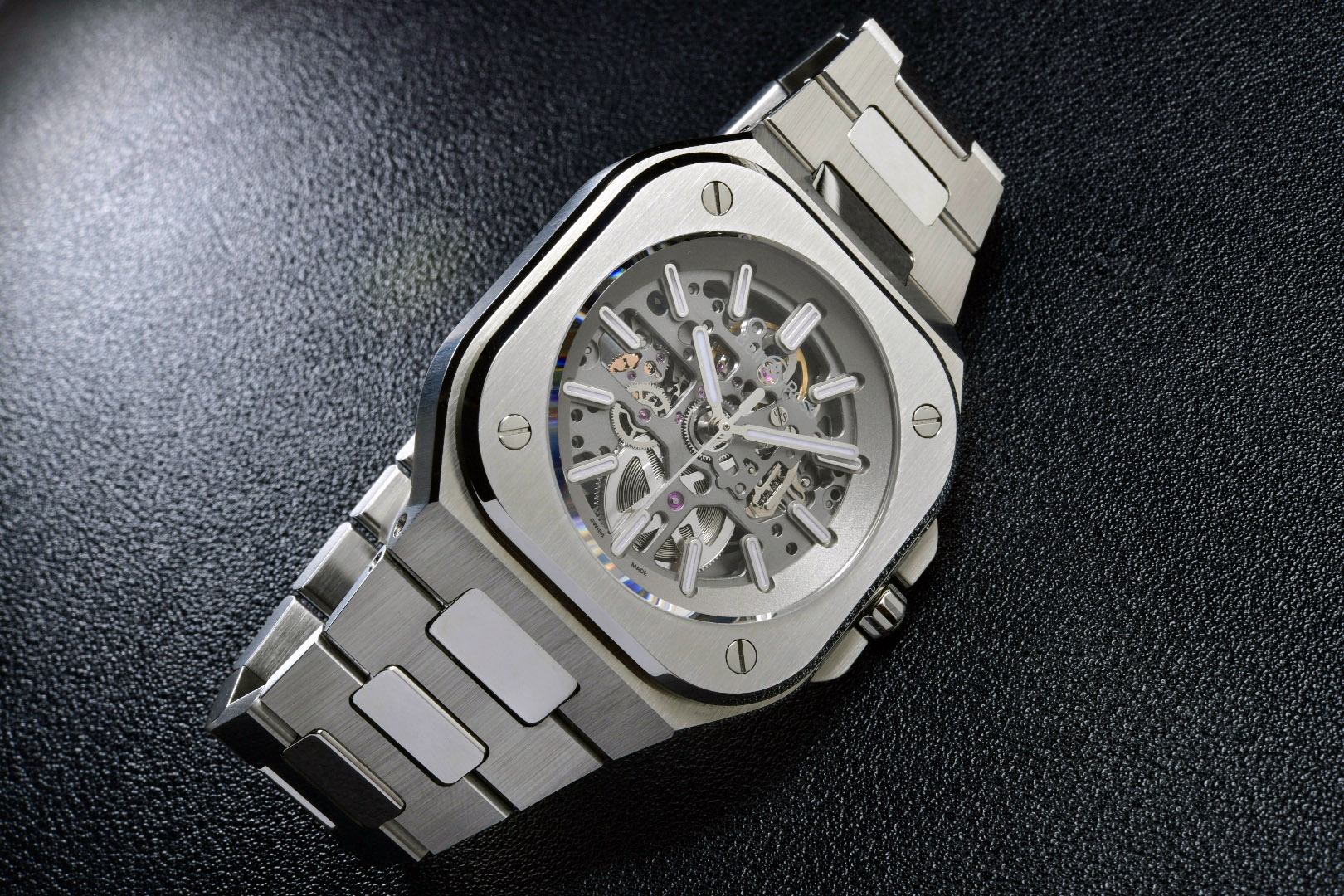 A jewel for everyday

I first saw this watch when it was still under embargo at Baselworld 2019, and the people from Bell & Ross were eager to get my feedback. Truth be told, I was not expecting a new collection from the brand, least of all for it depart from their regular strap based watches. In fact, I was taken aback by this fact alone, and almost couldn’t believe what I was seeing when the watches were placed in my hands.

Yet, upon closer examination, I quickly realized that all the goodness of the Bell & Ross design sense had made it into the watches, and they retain their brand DNA fully while at the same time, striking out in a totally new direction. That is not an easy thing to do.

Putting the watch on the wrist confirmed their intentions. It was obviously designed to be an elegant, sporty, everyday watch, and in that sense it has succeeded. It’s a very smart move since we as watch buyers, want watches that are versatile and usable in many situations. Having a metal bracelet gives you flexibility that as a matter of course due to what the material is capable of, and certainly a wider audience of new customers, who might not be so inclined to the macho, military aesthetic of the brand’s pilot watches, will definitely be able to take to this new collection very well.