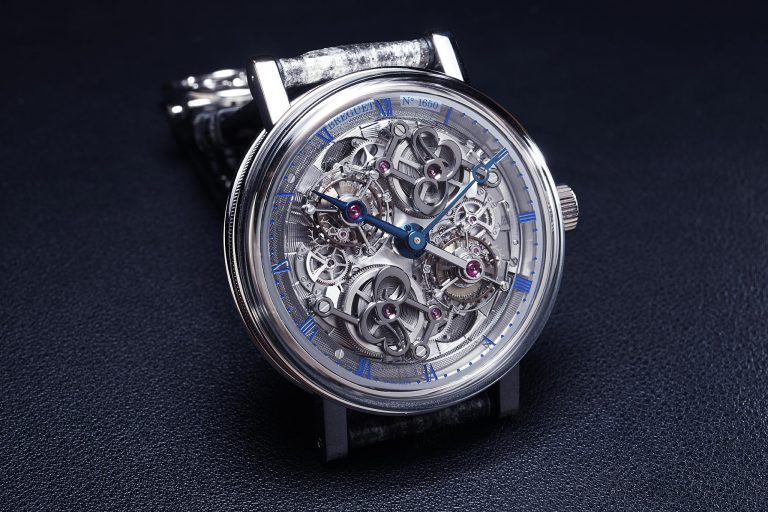 In modern times, Breguet has been quietly achieving in the field of Haute Horlogerie. The maker that brought us the Tourbillon in 1801 celebrates the 220th anniversary of its invention in 2021, and so appropriately, ISOCHRONO takes a look at the Classique Double Tourbillon Quai de l’Horloge Ref. 5345PT – a watch that pays tribute to a complication so nice, that Breguet had to do it twice.

There can be no doubt that Breguet’s genius has permeated the watchmaking world, having come up with many key innovations we see in watches today such as the gong spring that encircles minute repeating watches in 1783, the Breguet balance spring – a method of shaping the balance spring to ensure concentric breathing, and thus accurate timekeeping in 1795, and the first wristwatch for the Queen of Naples in 1810. However, it is almost universally agreed upon by connoisseurs and enthusiasts that Breguet’s most significant contribution to horology was the Tourbillon (French for “Whirlwind)  in 1801 – the prevailing thought that gravity affected the escapement of pocket watches of the time, and so Breguet mounted these components in a cage and had it rotate over a set period of time to average out the rate in the vertical position.

In the 20th and 21st Centuries, the Tourbillon is surrounded by notions of duality around its purpose. It both serves as an archaic device giving an insight into the thought processes of horology in the 1700s and 1800s, as well as a mechanical wonder, capable of incredible chronometric performance in addition to being a beautiful machine when crafted with a combination of modern and traditional techniques. The Breguet Classique Double Tourbillon Quai de l’Horloge manages this duality by looking resolutely modern, yet incorporating the signature crafts that constitute a watch from Breguet.

The Breguet Classique Double Tourbillon Quai de l’Horloge 5345PT (henceforth referred to as the 5345PT) is undoubtedly a tribute to height of the tourbillon as a timekeeping device, whilst being a display of micromechanics and traditional craft that the modern Breguet marque is capable of achieving.

The movement housed within the 46mm 950 Platinum case rotates on its axis once every 12 hours, capable of displaying the hours of the watch. The two tourbillons perform this rotation whilst they themselves rotate at the rate of one revolution per minute, driven by their own barrel that is easily identified with their steel “Breguet ‘B’” shaped barrel bridges.

The tourbillon cages are both independent, however, they are linked by another set of wheels and a central differential that is not only capable of determining the average rate of the tourbillons, but provides the ability for the movement to rotate on its axis. This gives not only an instantaneous visual impact to the watch with its two tourbillons, but also a watch that evolves throughout the course of its power reserve – evolving its appearance with every passing hour.

Originally unveiled in 2006, the Double Tourbillon movement in the 5345PT version is now liberated from a dial covering its mechanics, uncovering the fine craftsmanship that has gone into the watch itself. The tourbillon cages are amongst the only ones in the Breguet collection to be black polished, and all the components exhibit high levels of hand-finishing – from straight graining, satin brushing and chamfering. A master of guilloche, Breguet have also made the 5345PT a grand display of the craft, exhibiting it on the dial side of the watch where the movement components are located, as well as a Clous de Paris pattern just underneath the sapphire chapter ring that indicates the hours and minutes.

With the absence of a dial, the interior of the caseband is also revealed – this is where Breguet have hand-engraved Roman numerals to match the sapphire chapter ring.

Turning the watch over reveals another masterpiece of hand-engraving – a scene of Abraham-Louis Breguet’s workshop at 39 Quai de l’Horloge in Paris – one that is completely engraved into the plates and bridges of the movement.

Our Founder and Editor-in-Chief, Adi Soon spent an afternoon with this watch, and he is relieved to see that the brand has taken the covers off of the Double Tourbillon movement – a design choice he thinks that is more in line with modern tastes whilst keeping the traditional Breguet design cues such as the hands and guilloche-work. This is echoed with the choice of a stone/slate coloured strap, further emphasising the modernity of this piece. To him, it is a breath of fresh air for Breguet, and he hopes that these modern design cues continue into the future.

The dual-personalities of the Breguet Classique Double Tourbillon Quai de l’Horloge truly exhibit themselves in a way that is refreshing for this movement. Up until this point, the brand was almost demure in the presentation around this watch in its original release in 2006 – whilst taking the dial off the watch may seem like a simple thought, to present the watch in this fashion required a lot of additional work in finishing and decoration. The watch then, is a distillation of Breguet’s commitment to the Art of Watchmaking, exhibiting all of the crafts that make a watch functional, and beautiful.

If you ever get the opportunity to hold this watch in your hands, look closely – we guarantee that you will find new details the more you run your eye over it. Breguet’s adherence to tradition and craftsmanship manifests itself in this one reference. The 5345PT tells watch enthusiasts and connoisseurs all over the world that Breguet remains as the original innovator and the original creator of classic aesthetics in watchmaking, whilst bringing these qualities into the modern era.