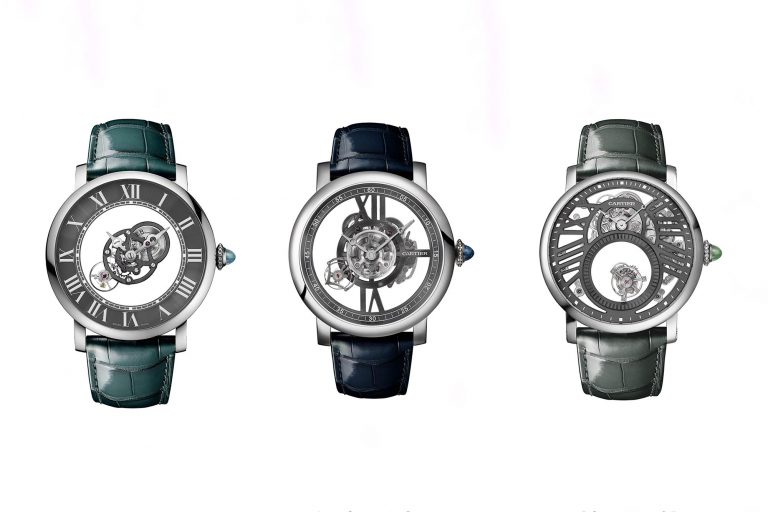 Cartier’s design language has been distinctive for over 100 years, finely crafting watches and clocks, elevating them to objets d’art. In particular, their Mystery Clocks have proved to be an inspiration for the King of Jewellers, able to pique the curiosity of even the most casual enthusiast of horology through their novel construction and artistic transparency. In 2021, Cartier reasserts their horological prowess with a set of three Fine Watchmaking Creations that feature transparency and lightness as its theme, and three Mini-Mystery Clocks, signalling the triumphant revival of their Fine Watchmaking collections and harking back to their golden age of clockmaking.

We begin with the Fine Watchmaking set – a set of three variations on the tourbillon. Whilst these movements have been seen before in past releases, it is genuinely a rare sight to see these kinds of mechanisms from Cartier, especially in these awe-inspiring constructions where the mechanisms appear to float in thin air. All of the watches are housed within Cartier’s Rotonde de Cartier case, a shape that gives a classic look whilst evoking modernity with its clean, sharp lines, that feature unique cabochon-cut stones set into their crowns.

The Rotonde de Cartier Astromysterieux was conceived at the Cartier Manufacture in La Chaux de Fonds, and it was the brainchild of Carole Forestier-Kasapi – a brilliant watchmaker whose specialty it was to create novel mechanisms where the movement itself became part of the time-telling indications of the watch. In the Astromysterieux, this is no different – the movement itself becomes the hands of the watch. The entire movement revolves around a fixed centre wheel that is mounted onto a sapphire disc, and becomes the minute hand. Naturally, this means that the tourbillon carriage completes one revolution every hour. This becomes a curious movement that appears to float in thin air, and it creates an air of mystery as to its operation. The watch combines multiple sapphire discs in layers to create the illusion of airy-ness, making this an object of wonder to those who get the opportunity to see it. A small pop of colour is added by an Aquamarine cabochon set into the crown, and the watch is mounted on an alligator strap matching the cabochon in the crown.

The next watch in the Fine Watchmaking set is the Rotonde de Cartier Astrotourbillon. It utilises a movement that has been seen in past models of the Fine Watchmaking collection (first unveiled in 2016), continuing its aesthetic to give maximum visibility to the movement, as well as continuing the theme of transparency of this set. The tourbillon, in this case, rotates once a minute, travelling around the dial – this is due to the construction of the tourbillon cage itself, being mounted above the traditional movement structure, giving the tourbillon cage its freedom of movement around the dial. The signature Cartier Roman numerals are integrated into the movement structure itself as bridges, giving the movement its signature Cartier aesthetic. The watch is paired with an aventurine cabochon in its crown, and a navy blue alligator strap.

The last watch in the Fine Watchmaking set is the Rotonde de Cartier Skeleton Mysterious Double Tourbillon. Built to echo the Mysterious Clocks of the 1910s and 20s, the main draw of the movement is the large space that uses sapphire discs with gear teeth at their periphery to give the illusion of defying gravity. The tourbillon within the negative space has no upper bridge, and completes one revolution every minute like a traditional tourbillon. However, the series of sapphire discs that hold the tourbillon make a rotation once every 5 minutes, making the tourbillon cage travel around the prominent negative space. The double tourbillon is accentuated by exploded Roman numerals that appear to emanate from the time-telling portion of the dial. Set into its crown is a jade cabochon, and a colour-matched Alligator leather strap.

The box housing these watchmaking masterpieces is a work of art, featuring wood marquetry in an interlocking spiral pattern. These feature fine pieces of wood in 6 shades that have been fitted together by hand. At the centre of each spiral is a lens that gives a peek of the watch dial housed below the box’s cover. The box also houses an alligator leather watch pouch, as well as a pair of white gold cufflinks with interchangeable stone bars in sodalite, jade and blue quartz. Limited to 5 sets worldwide, this is a Fine Watchmaking set fit for a modern King or Queen.

Cartier has also unveiled a set of three Mini Mystery Clocks featuring their perennial muse, the Panther. The series has been titled the Mini Panthere Mystery Clocks, and feature three clocks in yellow, pink and blue, each unique pieces in their own right.

All three will feature a rock crystal construction, with enamelled gold plates in yellow, pink or blue. These plates will be gem set with 3 emerald cabochons, while the bezel will be set with 72 brilliant cut diamonds, and either baguette cut diamonds or emeralds for the 12, 3, 6 and 9 markers. These structures will sit on a base of obsidian featuring a white gold panther in bas-relief, set with 421 brilliant cut diamonds for its body and legs, emerald eyes and an onyx nose. Each clock will house an in-house manufactured movement with an 8 day power reserve.

The Fine Watchmaking sets and the Mini Mystery Clocks hark back to an era of Cartier where their craftsmanship was second to none. The period of the 1910s and 1920s was truly a period where Cartier combined technical savior-faire with artisanal techniques to great effect, creating some of the most celebrated objets d’art the world has ever seen. With these creations in 2021, Cartier reasserts its position as the King of Jewellers, as well as reminding the watch public that they are still a force to be reckoned with in the world of Fine Watchmaking.