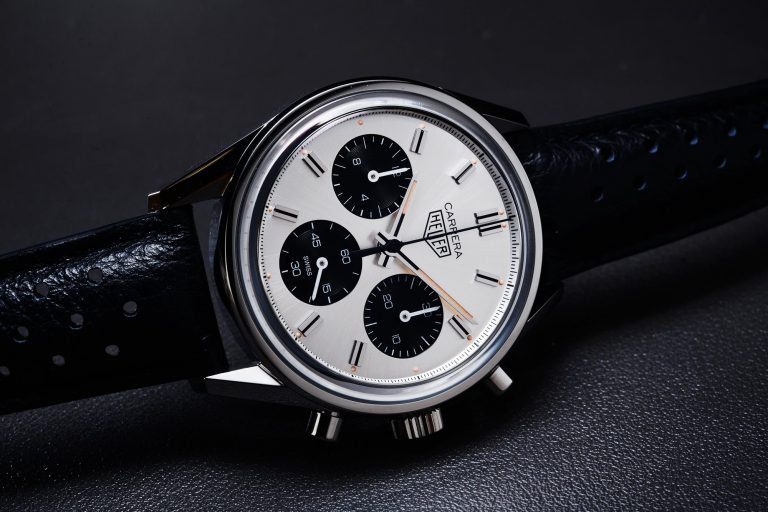 As a lover of vintage watches, the 600-piece limited Heuer Carrera Chronograph 60th Anniversary Edition, was my choice of the new releases at LVMH Watch Week this past week in Singapore.

Available for sale in boutiques from January 11th 2023, this is the first release of many to come this year that celebrates the Carrera family’s 60th Anniversary in 2023.

This 60th Anniversary Carrera is a modern update to the beloved ‘panda’ dial original from the 1960s, celebrating 60 years of its chronograph genre defining run. First introduced by Jack Heuer in 1963, the design has been an everlasting favourite over decades for legibility, ease of use and understated,  functional beauty. The Carrera is legendary in TAG Heuer’s history which speaks of its long lasting appeal – and is testament to how well it projects a cool, bold energy in a highly wearable action oriented watch that is both classic and modern. Personalities from F1 driver James Hunt, Mick Jagger and recently, Ryan Gosling have been noted to be among the fans of Carrera.

TAG Heuer’s engineering and design teams have leaned on the 2447 SN original – complete with the silvered dial and three registered black sundial design of the counters , reflecting the “SN” nomenclature: Silver and Noir.  The hour markers and hour/minute hands have stripes down the centre for ultimate legibility; and at 12 are double stopped to indicate when the chronograph hand is zeroed. White hands and markers on the black counters make for easy legibility and the beige Super-Luminova employed on the hands and at the tips of the hour markers extend that capability in low light.

The case has been updated to a modern sizing of 39mm from the classic’s 36mm. There is now a see through sapphire case-back which showcases the Heuer 02 column wheel chronograph movement that has 80 hours of power reserve, Geneva Stripes and a special 60th Anniversary rotor. The box shaped sapphire crystal raises the case profile; the slim silver flange on the outer edge of the dial has a 60 seconds/minute scale and the vintage styled rounded pushers and winding crown invoke a retro feel. Operation of the pushers is smooth, confident and firm, as expected from the column wheel TAG Heuer Calibre 02 Automatic movement powering the watch.   This update even offers the vintage Heuer logo.

Water resistance is rated at an everyday wearable 100m, which is good to survive in water if the watch is on a rubber strap. That being said, the supplied vintage inspired strap in a perforated black calfskin leather with polished steel folding clasp with double safety push buttons, will make this more of a land dwelling time-piece instead, perfect if you’re driving.

For any vintage lover, especially of the Heuer Carrera, this is a solid, highly specified and modern update that sacrifices little on the original yet offers substantial modern qualities like wearability, increased water resistance, and robustness; with an in house movement with a three days plus power reserve and a modern chronograph function that operates precisely and smoothly. This exciting opener to the 60th anniversary celebrations of the family signals a promising start to what will be a succession of exciting, excellent Carrera inspired releases all year.