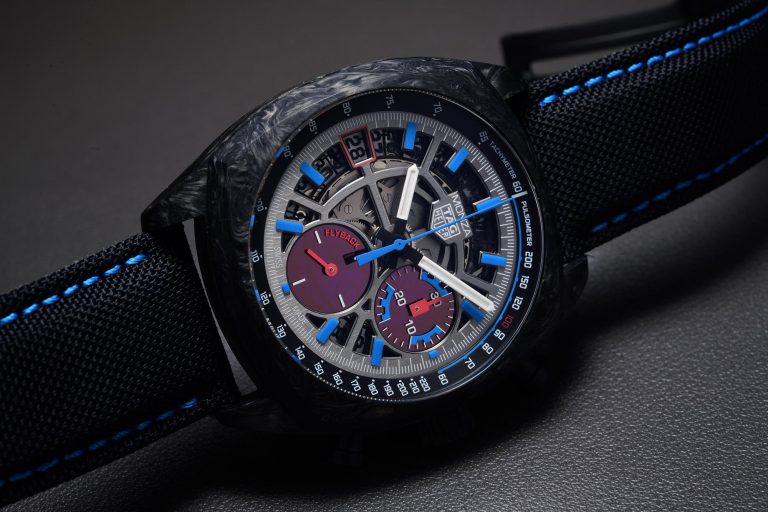 A new TAG Heuer Monza for our modern era

TAG Heuer and Motorsport have been indelible partners since Jack Heuer convinced star Formula One star drivers to wear his inspired watches on the racetrack the 1960s. Historical Heuer watches have even transcended the sport to star on the silver screen, specifically in race car films where icons like the “Steve McQueen Monaco” were born. The square cased Monaco became associated irreversibly with the film, “Le Mans” when Steve McQueen was equipped with the watch to wear for the film as its lead actor.

One of the most significant pieces of the Tag Heuer stable, The Monza, arrives in a 2023 contemporary form, manifesting the luxury watchmaker’s “advance expertise in dial design and performance timekeeping”, according to Frederic Arnault, CEO of Tag Heuer. “It is a bold and resolutely modern reinterpretation of its famed ancestor”, invoking the original watch’s rich emotional and historic racing heritage. The Monza was introduced to celebrate Niki Lauda’s historic 1975 F1 World Championship with Scuderia Ferrari, for which Heuer was its technical timing partner. The watch is named after the Italian racetrack which is still part of the Formula One racing calendar today – its famed location near Modena, the home of Ferrari, features high speed turns such as the Parabolica – and is still one of the favoured tracks that F1 drivers love to drive on and win!

I have always enjoyed the tactile almost pebble like haptic feel of the Monza case in its original form; its very readable dial and hands set against a serious, professional black dial with contrasting red and cream colour codes to lift the arrangement into a spirit of energetic ‘raciness’.

This contemporary version enhances the spirit and feel of the original in more ways – its striking black dial featuring a two registers arrangement with translucent fume blue sapphire crystal chronograph counter at 3 and permanent second at 6 o’clock.

The movement is seen through a skeletonise dial and the blue colour code is replayed on the date window at 9 o’clock, as well as on the  lacquered indexes. Super-luminova applied hour and minute hands offer great legibility in low light. The watch is powered by TAG Heuer’s in house 02 Flyback calibre – allowing the chronograph hand to reset without stopping it for lap timing.

In action, the Monza offers a chronograph, a tachymeter to calculate average speed over a kilometre or mile, and a pulsometer, which determines heartbeats per minute. All useful functions for any racing driver, in theory and ostensibly, in practice! Red details, as in the original Monza, contrast elegantly against the black dial, case, blue indexes and stitching on the textile strap.

The Principal of the F1 Red Bull Racing Team, Christian Horner, says that the Monza is one of his favourite personal watches, having bought the original at Nice airport to celebrate a successful race in Monaco. TAG Heuer also happens to be a partner of Oracle Red Bull Racing Team (since 2016)! Available from January 2023, and sold in boutiques, this superbly engineered and well designed watch will surely set the hearts of TAG Heuer collectors racing!