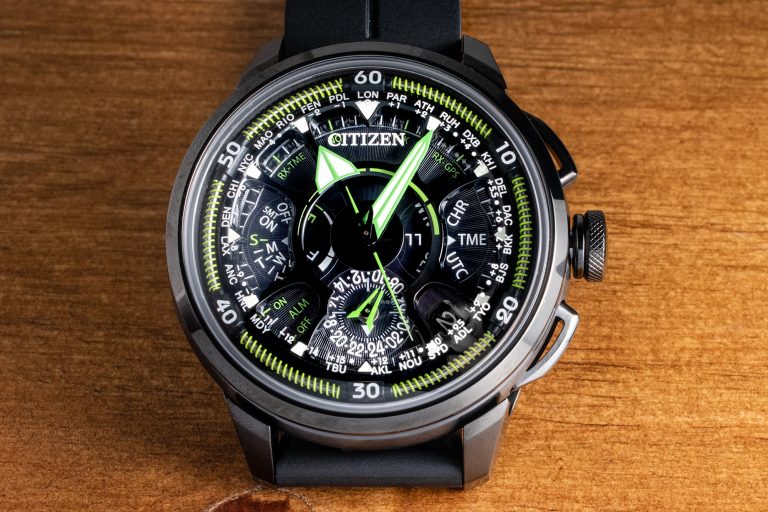 Inflamed by the original

While most watches that are released are merely retreads and subtle variations on things that have been done before, it is a rare occasion when something comes along that not only captures the imagination, but inflames a desire of ownership.

Back in 2011 as I was perusing the news about the latest watches from Baselworld, I came across such a watch, one of the coolest I had seen in a long time.

This was the then-new Citizen Eco Drive SATELLITE WAVE H990, an ultra cool watch that was billed as the world’s first light-powered satellite synchronised watch. It helped that the watch was featured on the wrist of characters from the “Appleseed XIII” anime in a trailer/commercial made in collaboration with Citizen, further enhancing the already cool, futuristic and modern feel of the watch. I mean, how much more futuristic can a watch be when it gets its time from satellites?

Furthermore, it was the design of the watch that really inflamed my desire. It had a black stainless steel and ceramic case that had a bulbous pebble like shape, with green dial accents matched to green spiral coil like things that looked like antennas, making a watch that had an organic yet technological feel. 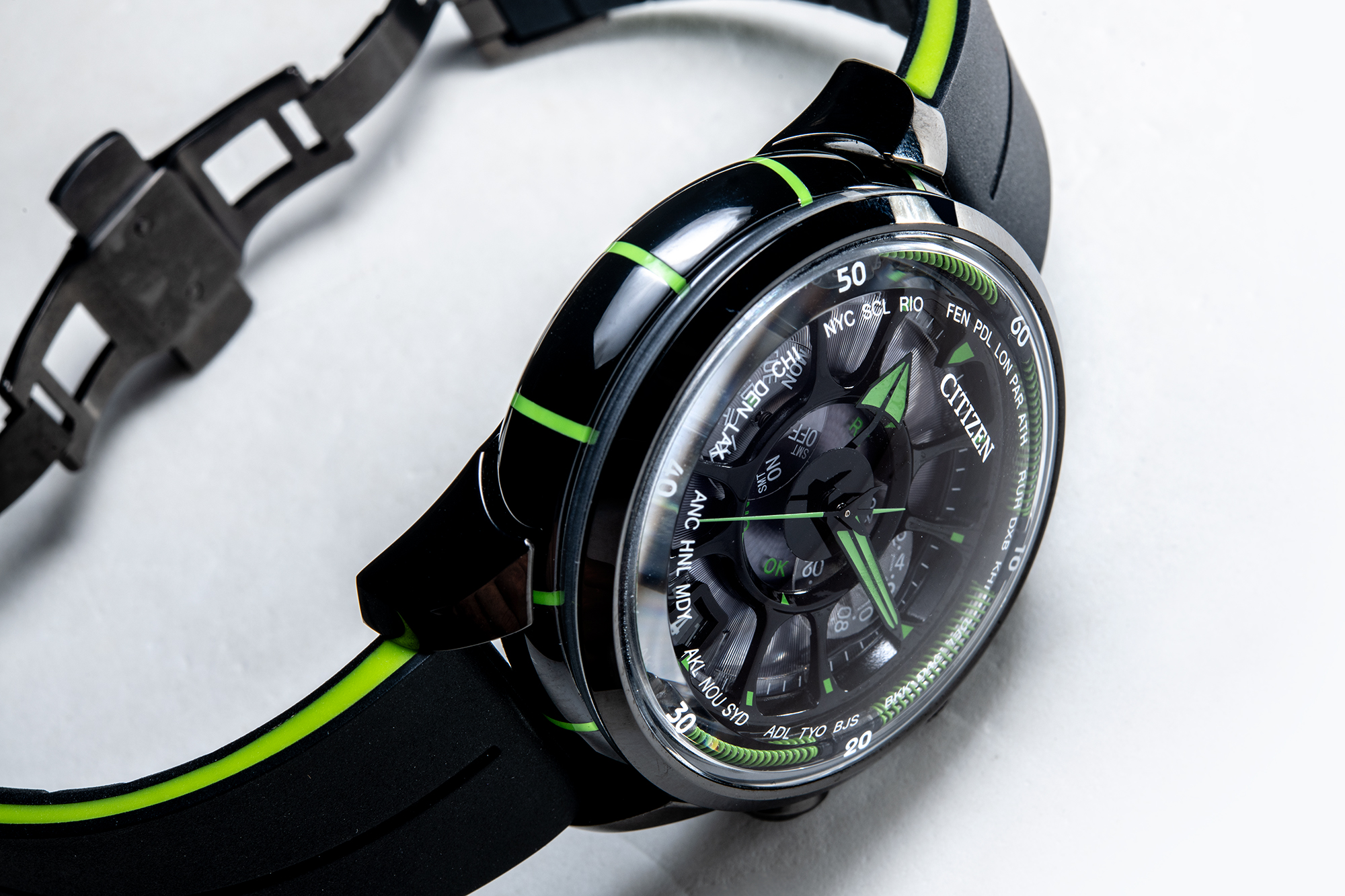 I knew that I wanted that watch immediately after seeing that trailer, as did many other people, who were clamouring in the forums about when it would be available. My euphoria was short-lived however. It was, I was to find out later, a concept watch, that had a limitation of 990 pieces and it was quite expensive, at US$6000, which I could not afford. All I was able to do then, was to write it down on a list of watches that I wanted, and try not to think about it too much.

Imagine what it’s like when your dream girl from a long time ago, suddenly appears before your eyes looking every bit as beautiful as before as when you remembered her, but with far more intelligence, wit and soul?

Well, that was exactly what I felt as I sat across the table from the Citizen representative at Baselworld 2018 as he handed me the new SATELLITE WAVE GPS F990, a watch that superficially looks 90% the same as the original, but comes with radical improvements. 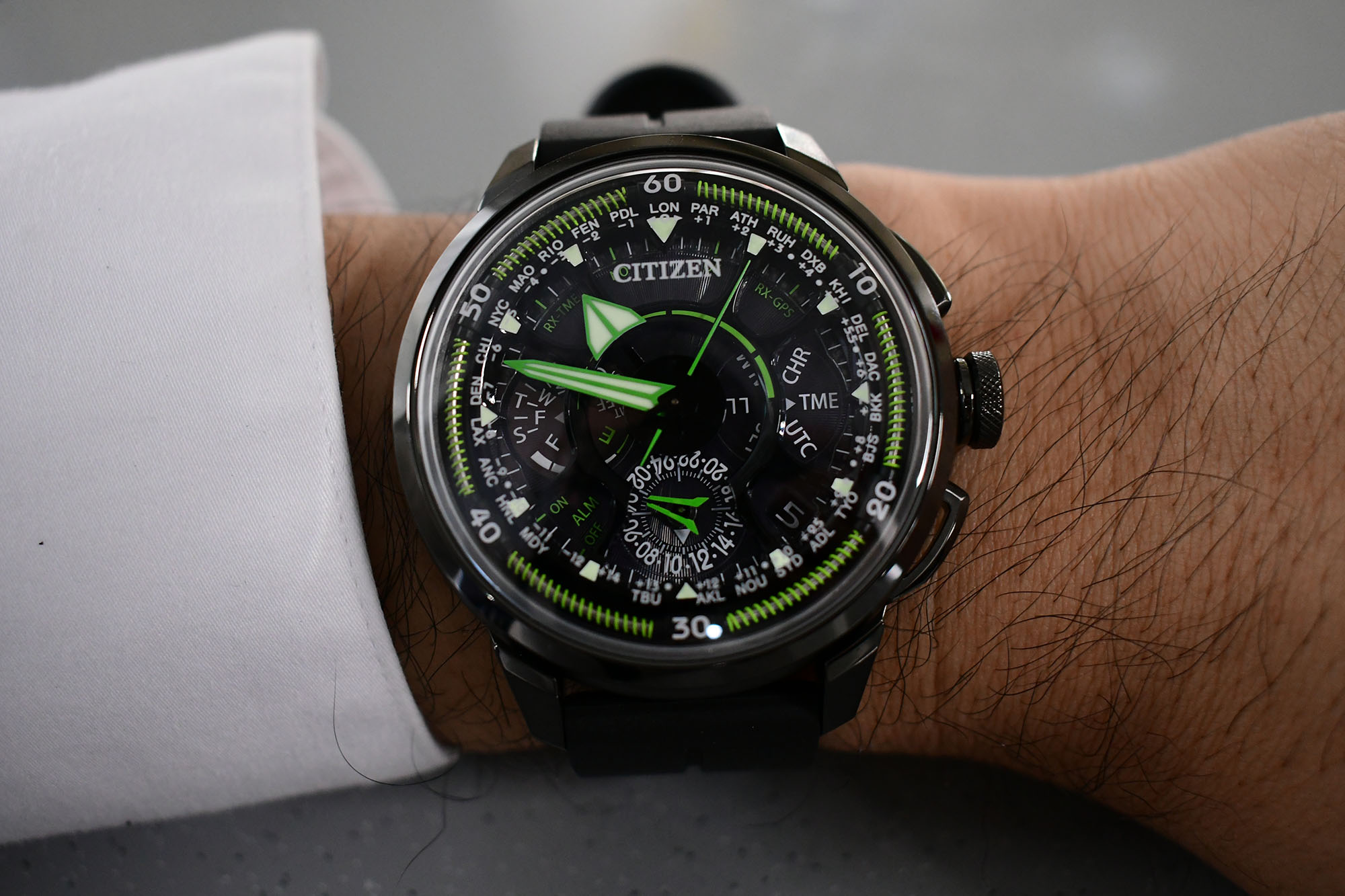 The most significant change is a technical one, and accounts for the addition of the “GPS”  in the name. In the previous watch, while the time signal is obtained from satellites in the sky, there was no location information, which required this to be manually set, in order for the watch to show the correct time. Technically speaking then, that watch was “GPS-controlled”, and it proved a bane to owners of that watch.

The new SATELLITE WAVE GPS F990 however, overcomes this limitation, with the watch able to not only get the time signal but to know in which timezone it is in, showing you both pieces of information on your wrist. In this way of course, what happens is that when you land in a new timezone, the watch automatically looks for a time signal, and sets the new time by itself. This is definitely in line with what we’ve come to expect nowadays in GPS watches and is a welcome change.

Of course 2011 was quite some time ago, and in the interim, Citizen has been working hard to improve the performance of their GPS movements. The new GPS satellite synchronised movement F990, is an improved version of the current F900, and doubles the speed of the minute and hour hand spinning with a new high speed twin coil motor. This, coupled with the world’s fastest satellite reception – at 3 seconds – means you won’t have to wait around long to get the correct time. By comparison, other GPS watches in my experience, can take much longer to acquire a signal – up 2 minutes in some cases. It also makes switching between home time and local time much faster since it takes the hands 0.9 seconds to spin each hour.

The Eco-Drive capability, Citizen’s light charging technology means no batteries are required, and the watch can remain powered in the dark up to a year and half, with the movement maintaining an accuracy of 5 seconds a month without connecting to satellites. Lastly, the movement also adds useful functionality in the form of a chronograph and an alarm function, features that the older version did not have. 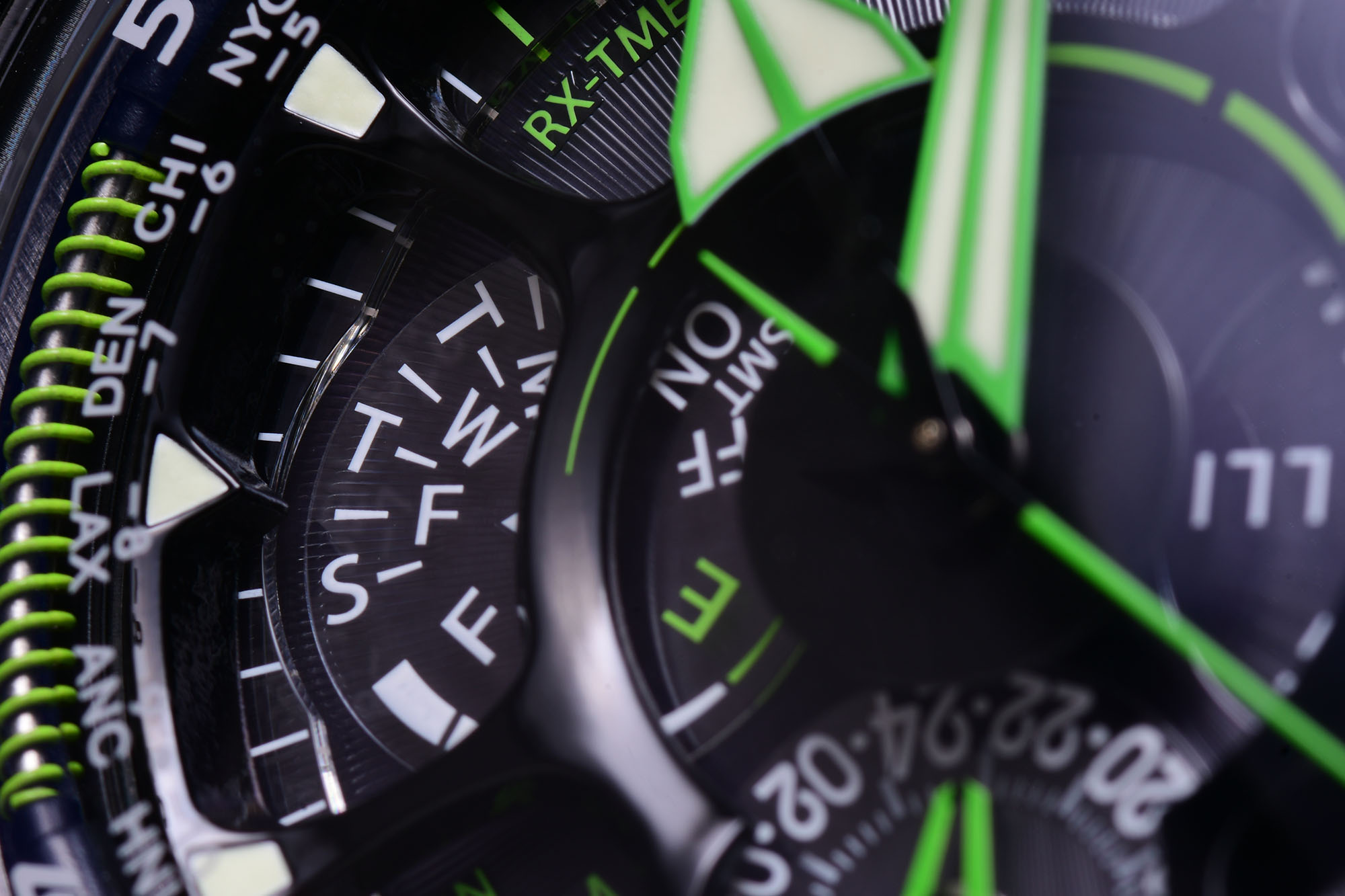 In terms of the GPS, it is, in addition to the American based GPS satellites that we all know, also compatible with all Michibiki Quasi-Zenith Satellites (QZSS). This system was created by the Japanese Government and uses three satellites, in highly inclined, slightly elliptical, geosynchronous orbits, 120° apart from each other. These satellites are not geostationary – in that they do not remain in the same place in the sky. Instead, their path on the ground traces an asymmetrical figure-8 patterns (analemmas), which is designed to ensure that one is almost directly overhead over Japan at all times. 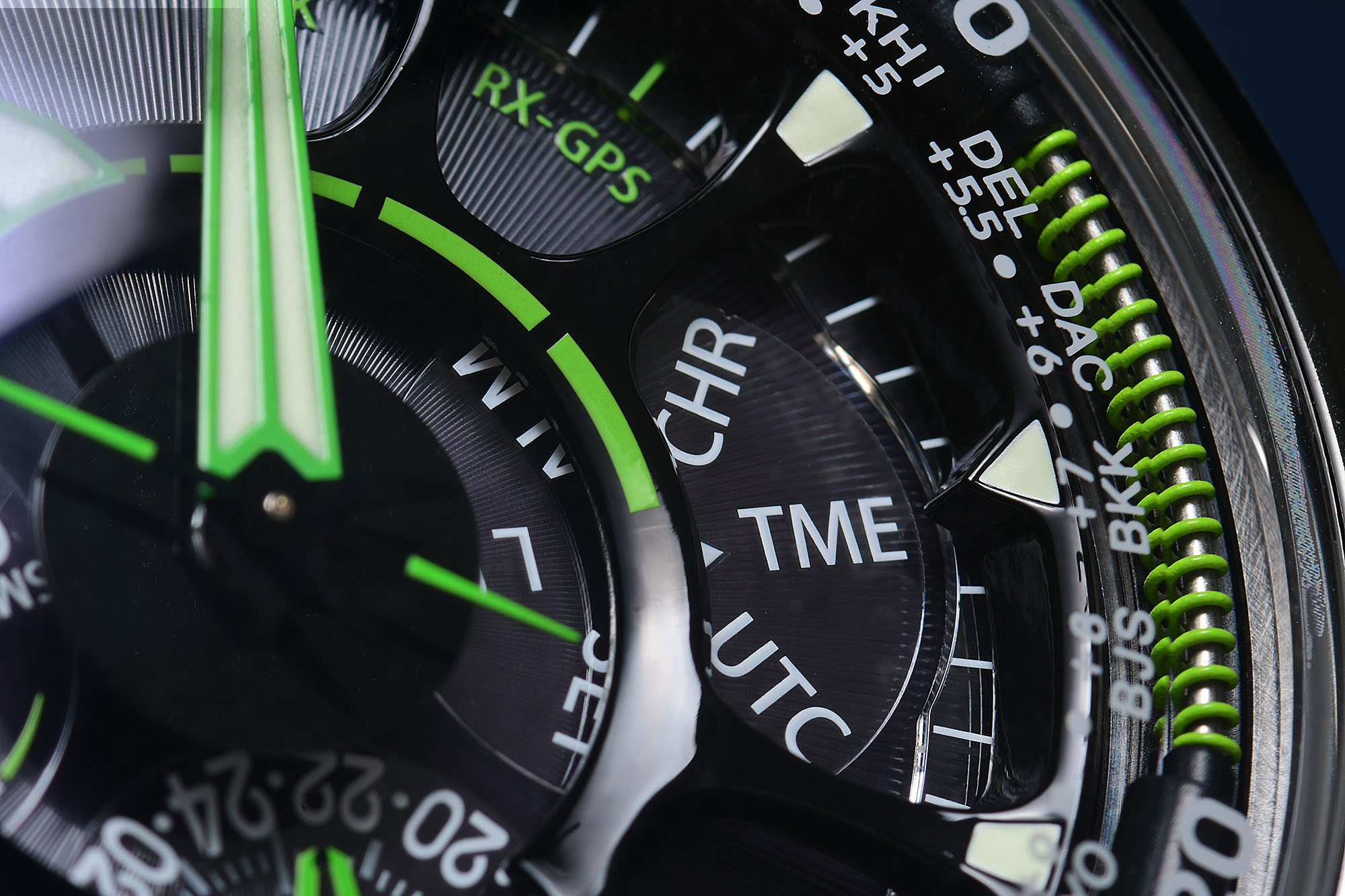 Other changes to the watch include the date window of the original now changed to a pointer hand date in its own subdial, as well as a lighter case made of Super Titanium (Duratec DLC),  Citizen’s proprietary case hardening technology with a Vickers rating of 1400Hv compared to stainless steel at 150Hv. This certainly makes the new watch noticeably lighter compared to the old version, which came in stainless steel and ceramic, and makes the large 48.5mm size case (same size for both) much easier to wear.

Aesthetically, the new watch retains one of the best aspects of the original’s design, the spiral parts that are accented in different colours (depending on the version), a homage to the centrally mounted coil shaped antenna from Citizen’s ground-breaking release in 1993 – the world’s first multi-band radio controlled watch. Meant to represent the wavelength of radio waves of the watch as well as the wavelengths of light that are the power source of the new watches, it is a nice touch that connects to the brand’s philosophy of continually pursuing technological improvements in accurate timekeeping. 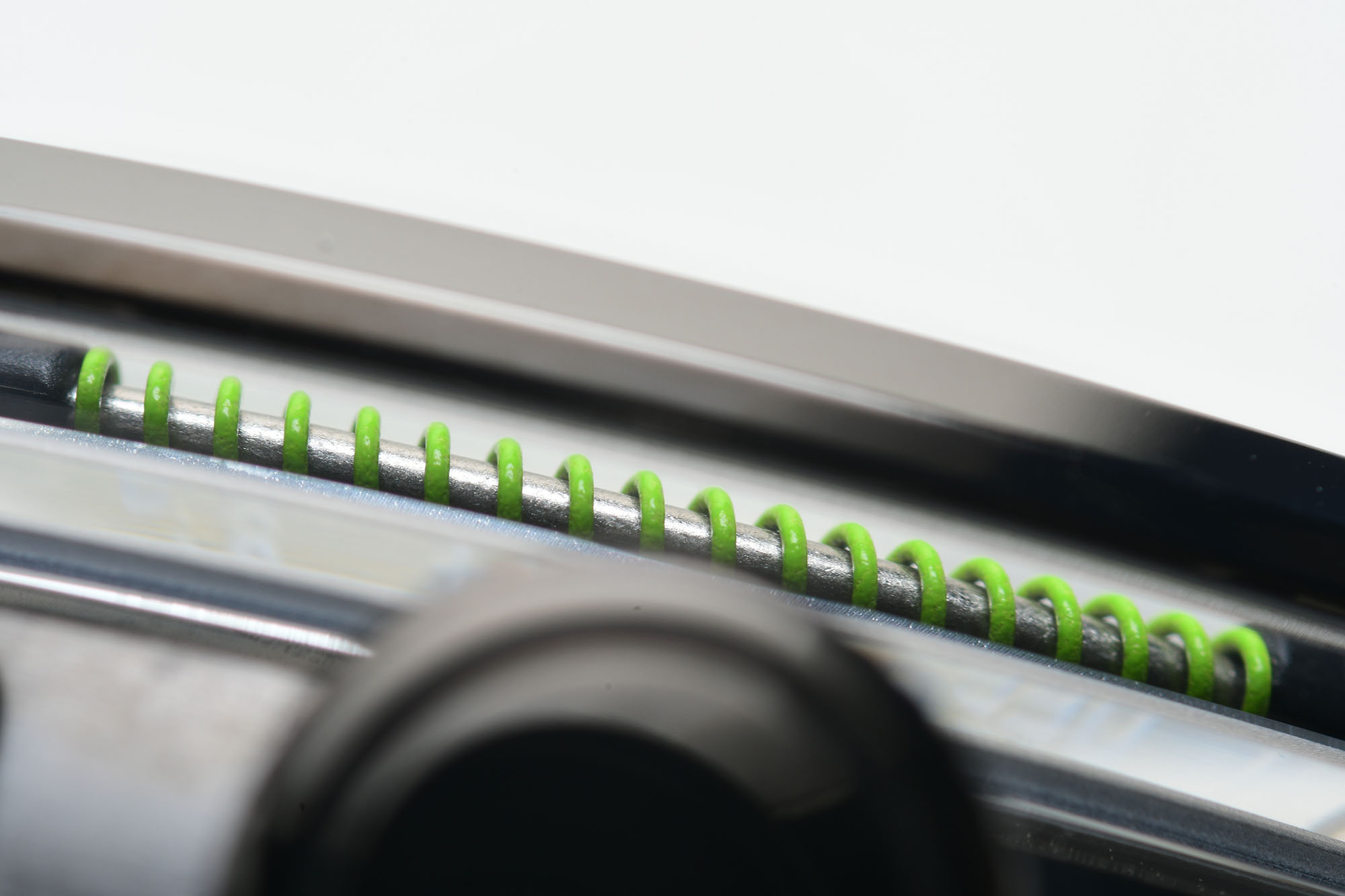 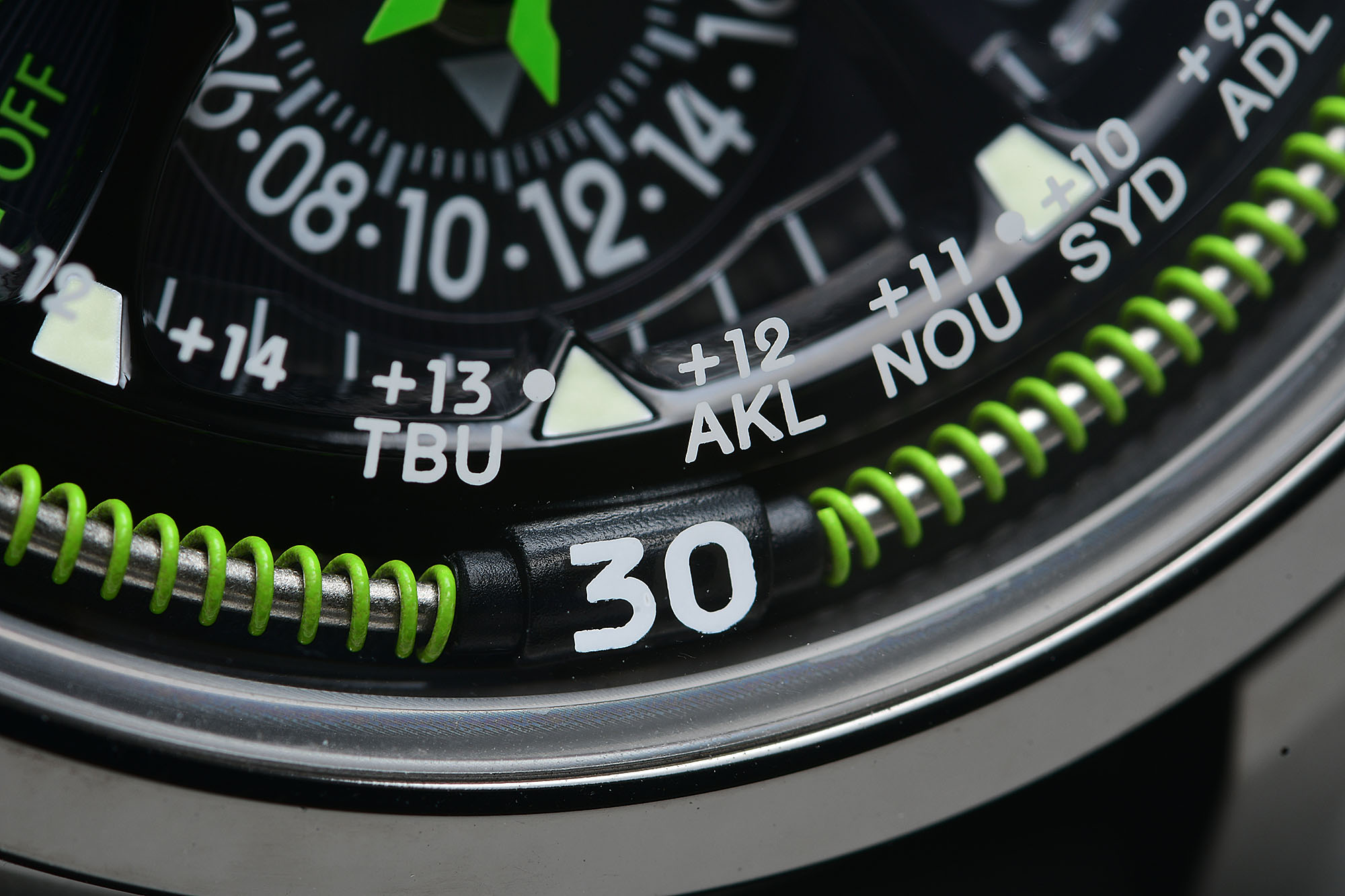 Where it departs in looks however comes in the form of the pushers, which are a design detail that comes the Satellite Wave F100 of 2014, a watch that was released after the original H990. This watch had a sensationally cool design as it was angular and faceted, very much like the F117 Stealth Fighter plane. While the design ideas introduced by this watch have gradually faded from the Satellite Wave collection, one of the best design details that it introduced – the skeletonized pushers to adjust the functions – comes to the new F990.

Perhaps it was good that I did not acquire the original H990 after all and had to wait 7 years for the new generation F990 to appear. After-all it is better in the ways that matter – usability and performance, yet keeps the best parts of the original – the aesthetics – the same as before. Even better, the F990 comes in 3 different colour variations, green, white and gold with a less stringent limitation of 1500 pieces each.

What will it be for me then? Well, given my history with the original, it will have to be the green one of course. 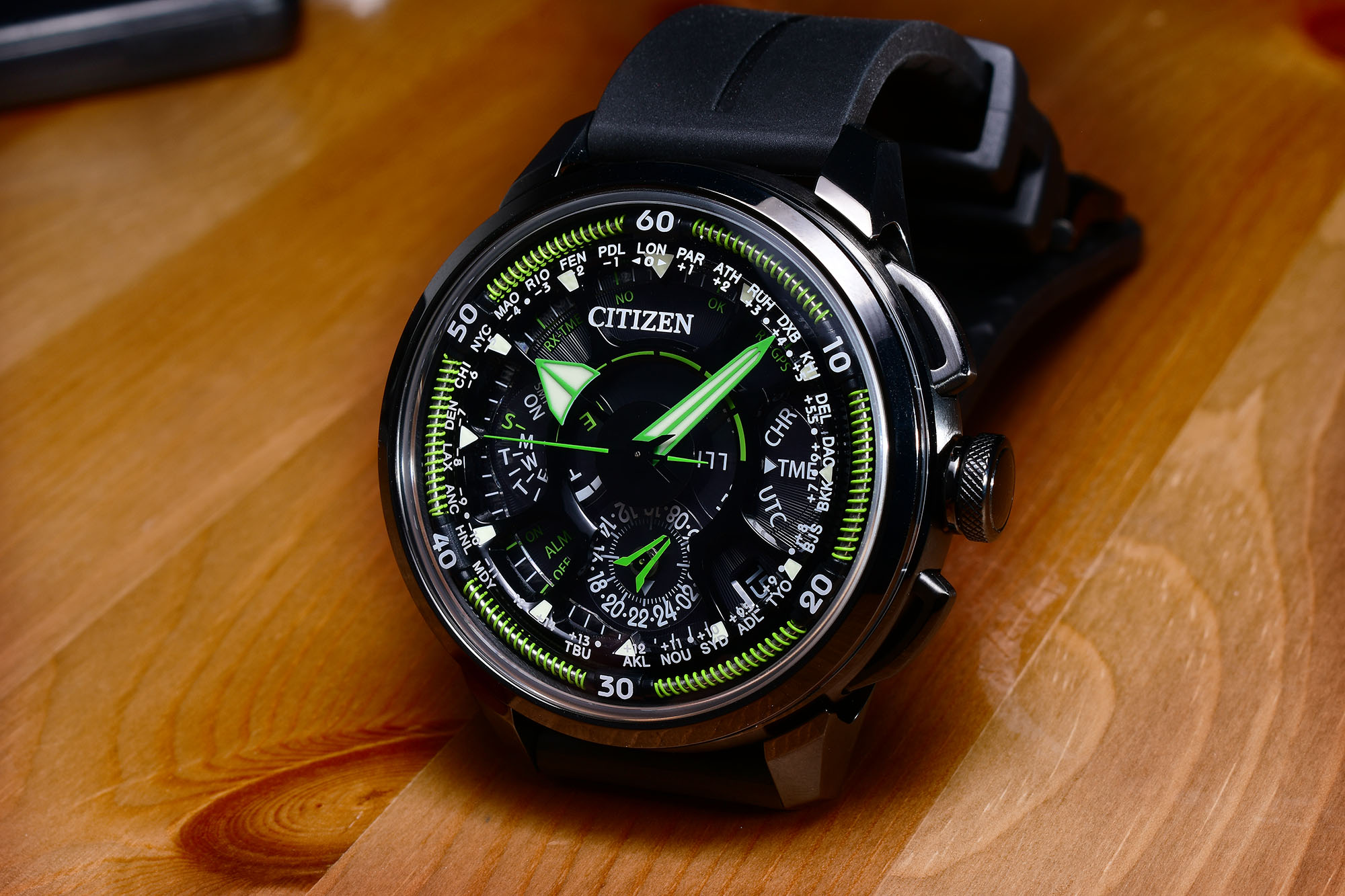