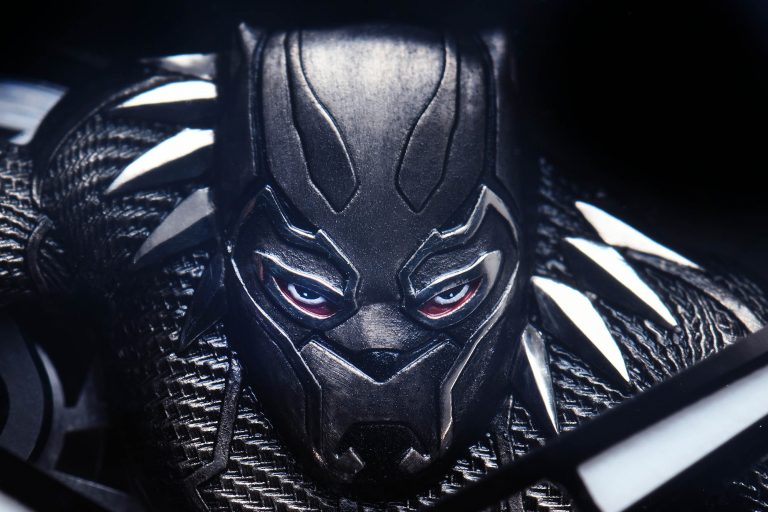 Audemars Piguet dropped the Royal Oak Concept Black Panther Flying Tourbillon this past Sunday after teasing a Marvel collaboration last month, and I suppose it was to be expected that there would be a torrent of criticism and pushback against the watch when it appeared.

It is of course not made of the fictional “Vibranium” – instead it comes in a 42mm wide titanium case, topped with a back ceramic bezel and mounted on a strap in the royal purple of Wakanda, with matching accents on the ceramic chapter ring.

There is a flying tourbillon at the 6 o’clock position on the dial, but no one will be paying heed to that since what dominates the rest of the real estate is the engraving of Black Panther in a pre-attack pose, ready to spring from the watch to save the world.

Crafted in white gold, and requiring 30 hours of labour to create, it is the result of craftsmanship of the highest order, even as a comic book character might not be a traditional metier d’arts subject.

It is so well done that you can use a loupe to enjoy the abundance of minute textures and details, just as you would the finishing of a high-end movement. There, you will find a figure so beautifully rendered, that it almost seems alive. Just look at the texture of the suit and consider how a human hand had to carve all of that under a microscope. Then look into the eyes of the Black Panther , and you can almost feel the anger of T’challa piercing your soul.

Now, while only the owner of the watch can enjoy it in this way, I hope that these close up views of the Black Panther engraving will go some way to assuage your negative feelings of the watch should you have them.

I understand fully that placing a comic book character on the dial of an Audemars Piguet might seem sacrilegious, especially if you’re used to the classically oriented tradition of the brand.

Yet let me say this – my opinion on the matter is that luxury watches in all their forms, are in our modern era, essentially objects of pleasure. No one needs a slim gold dress watch for the dwindling number of formal events that occur these days, nor do real pilots need an old school pilot’s watch to fly their planes successfully. Heck, even real soldiers nowadays rely on Casio G-Shocks for their indestructibility, functionality and their cost-effectiveness. I mean, you could use one of those old school military field or diving watches, and even their modern descendants for actual military service, and if you do, good for you. But would you be lacking in your timekeeping equipment in any way if you wore a cheap digital watch? Most definitely not. In fact, the digital watch would probably give you more functions.

Nowhere was this demonstrated to me more convincingly, than at my first SIHH a long time ago, at the Audemars Piguet booth no less, when a fully diamond encrusted Royal Oak Offshore was placed on my wrist.

I did not expect to have the reaction that I did at wearing a watch like this, for unexpectedly, I began to smile. Seeing such an extravagant and ostentatious thing on my wrist, sparkling and gleaming in the light, I suddenly realized what it must be like to give into pure pleasure, to have and to wear something so decadent, so ridiculous and so amazing.

Furthermore, the reason why this was a significant experience for me was that prior to that moment, I might have judged that exact watch as being gaudy, tasteless, and trashy – the sorts of words that the naysayers might apply to the Royal Oak Concept Black Panther of today.

Watchmaking today is no longer about function. Instead, it is an art that allows us a plurality of means towards personal expression.

We might pay a nod to tradition, wearing a dress watch and wearing suits cut in the manner of past decades, but why? Because it’s a bit of fun, a bit of play acting and a bit of self expression. I mean, would you begrudge someone who wears a chunky dive watch with a suit these days?

So you might agree with my general argument. But does the Black Panther make sense for a brand like Audemars Piguet. Well to that I can concede that it is probably the only Holy Trinity brand where such a watch makes sense.

Audemars Piguet is afterall the most extroverted of the three, being generally of bold and confident design. The Offshore collection in particular is well known for being big, chunky and in your face, and with the bright rubber straps and sporty demeanour, it definitely does show that Audemars Piguet is much more keen to try out new things, being one of the first brands that experimented with non traditional materials in watchmaking like Forged Carbon.

There are certainly more than enough traditionally oriented brands to go round, and it’s great that there are brands like Audemars Piguet (and not to mention, Richard Mille as well) at the high end, who are keen to distance themselves from the violin music soaked background of the 19th Century.

Yes it’s true, if Vibranium were real and Audemars Piguet was given some to make a watch from it for Black Panther himself to wear, he might not want to have a picture of himself on his watch and so it might have a different design.

That’s definitely one way to think about how a different design under this collaboration with Marvel could work, but let’s be real, we are talking about a fictional character here so it’s possible to be a little more straightforward.

If we look at it that way, perhaps then the Black Panther, as well as the subsequent Marvel characters that will appear in future watches might seem more understandable to you.

Certainly, while I’m not the level of collector that can have my name down for the 250 pieces of a watch like this, I would most definitely buy one if I could. With the number of Audemars Piguet and/or Marvel fans out there, there will be buyers for this watch. Or if not, it’s something to consider if you’re a collector of watches with an uncommon expression of metier d’arts or if you just want to own the most polarizing watch (so far) of 2021.