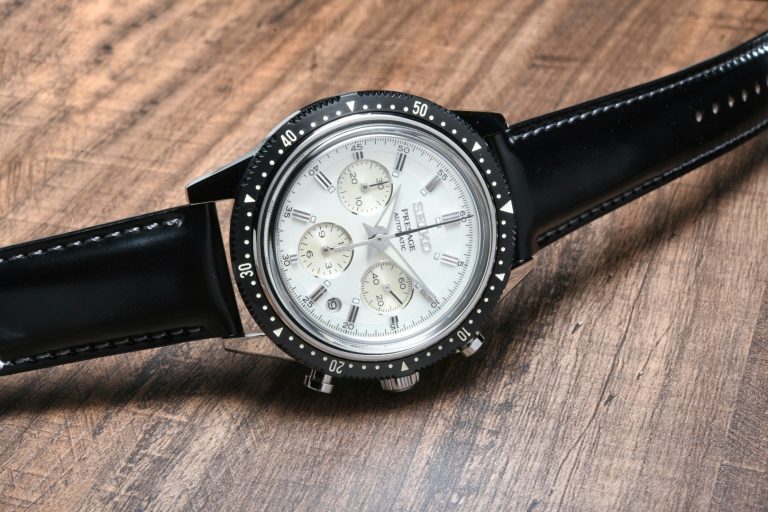 Seiko just knows how to create watches that incite desire – from the higher end Grand Seiko 60th anniversary collection for 2020, to the Seiko Historical Collection discussed in this article, to the more affordable Seiko Prospex “Alpinist” collection – all price points are covered, and with watches that are attractive in their own right. It’s no surprise that they are opening boutiques all over the place, including their first in Europe, at Place Vendôme in Paris, in 2020.

The Seiko Historical Collection was announced only recently in December 2019, and was presented as two chronographs, with one in the more elegant Presage and the other in the sport oriented Prospex collection. The special micro site that was created to explain them was a revelation, since all it took was one read through for me to want to have a closer look at the watches.

Both are based on important historical models, are three register chronographs, with date, and run the Calibre 8R48 with column wheel and vertical clutch, and hand winding capability.

The Prospex model was based on the original Panda chrono that had the landmark calibre 6139 from 1969, Seiko’s entrant in the global race to produce the world’s first automatic chronograph movement. The Presage model however is based on an even earlier watch – the Crown Chronograph of 1964.

I was only able to see the Presage model, since the allocation for the Prospex one was already sold out in my local market – which understandable given that both are limited to 1000 pieces. In person, the Presage historical model is a stunner, and my experience underscores why the brand is on fire right now. Once on the wrist, all I felt was desire, which is truly a rare thing, and even rarer from a brand that has the ability to do it again and again with many of their watches. It’s a serious showcase of a brand’s ability to create compelling products that watch lovers want. 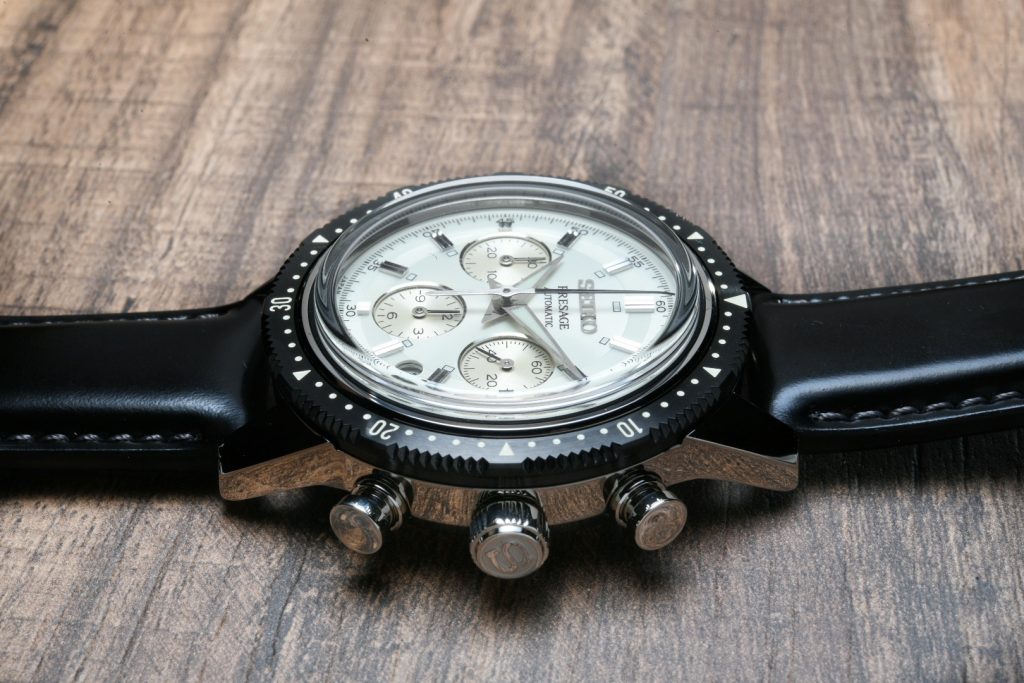 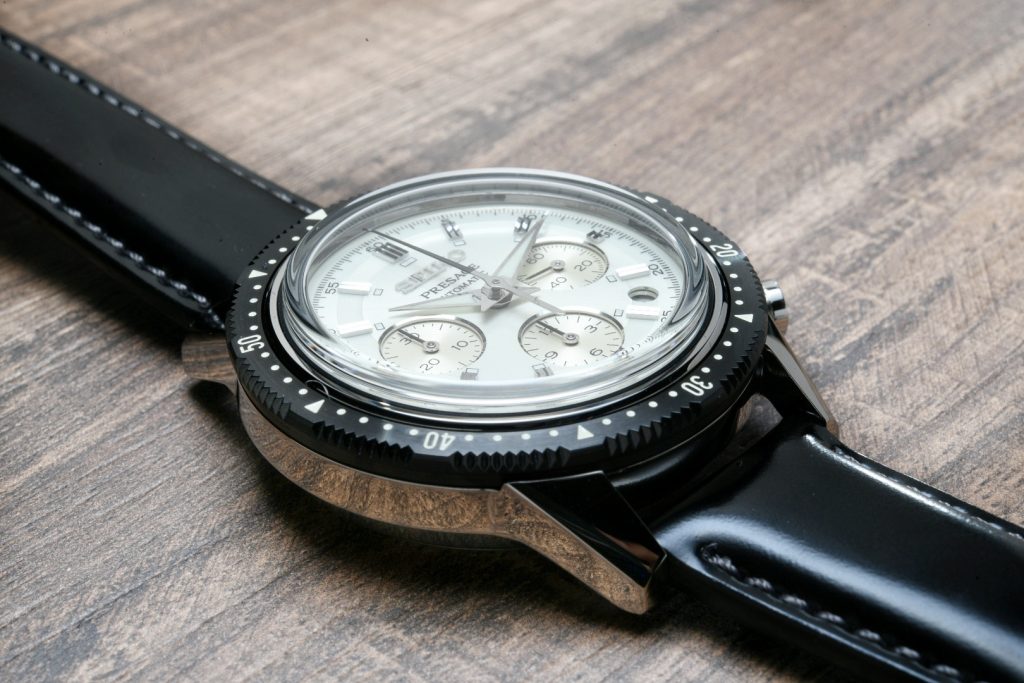 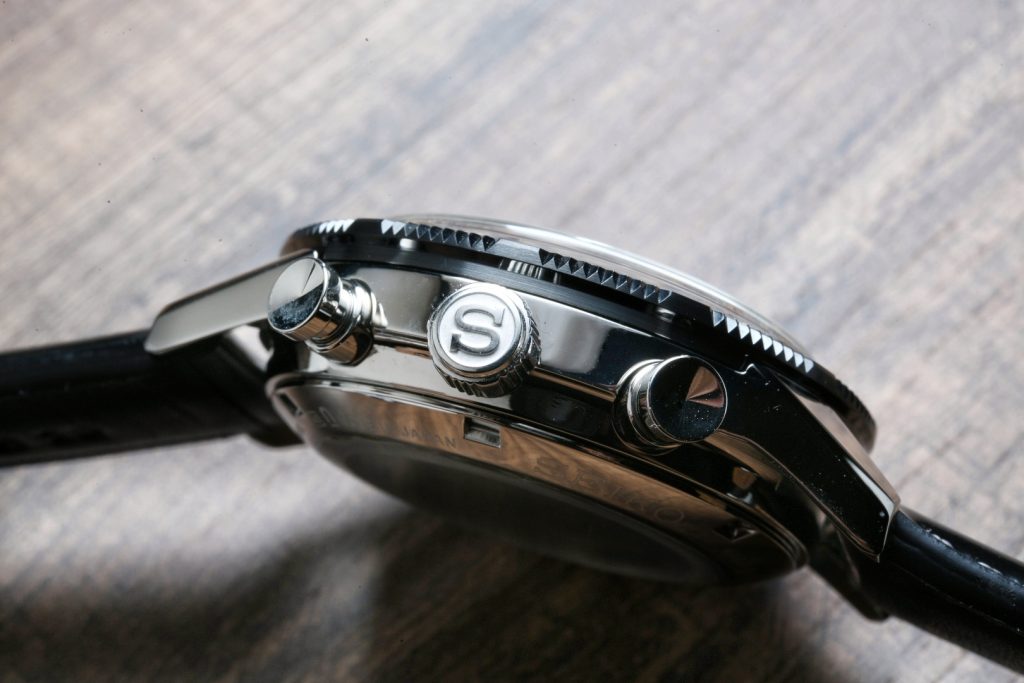 With the Crown Chronograph of 1964 being the basis for the Presage model’s inspiration, it’s obvious that most of the aesthetic details have been kept – the box-shaped crystal, the sharply defined numerals on the narrow bezel the inwardly tilted case shape that allows the watch to sit tight on the wrist and even the rotating bezel.

Yet one thing is immediately obvious, the Crown Chronograph of 1964 was the earliest watch based Seiko chronograph (pocket watches with chronographs had been made in the 1940’s), and so featured a relatively simple mechanism, with a pusher at 2 o’clock on the case that was used to start the central chronograph seconds hand that could only measure up to one minute. Remember that this was 5 years before the release of the calibre 6139 of 1969 and was limited in functionality, but it was a real step forward. 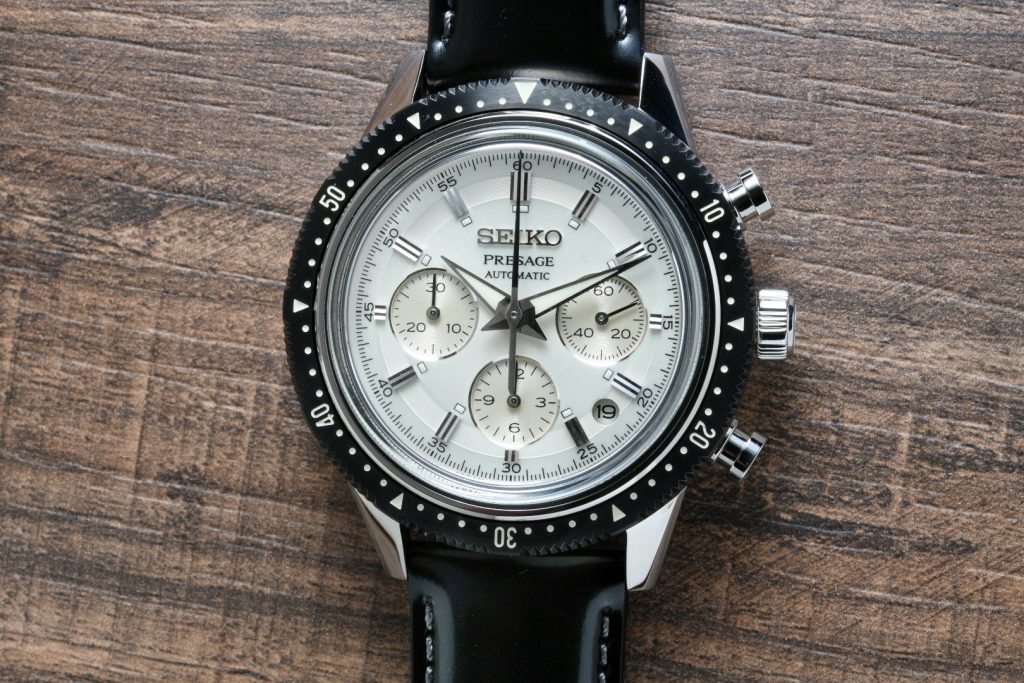 On the new watch, the functionality is anything but limited. Running the Caliber 8R48 that can measure up to 12 hours, the relatively clean dial of the historical model is busier in the modern iteration, with 3 sub-dials for chronograph hours, chronograph minutes and running seconds, and also the centrally mounted chronograph seconds hand. 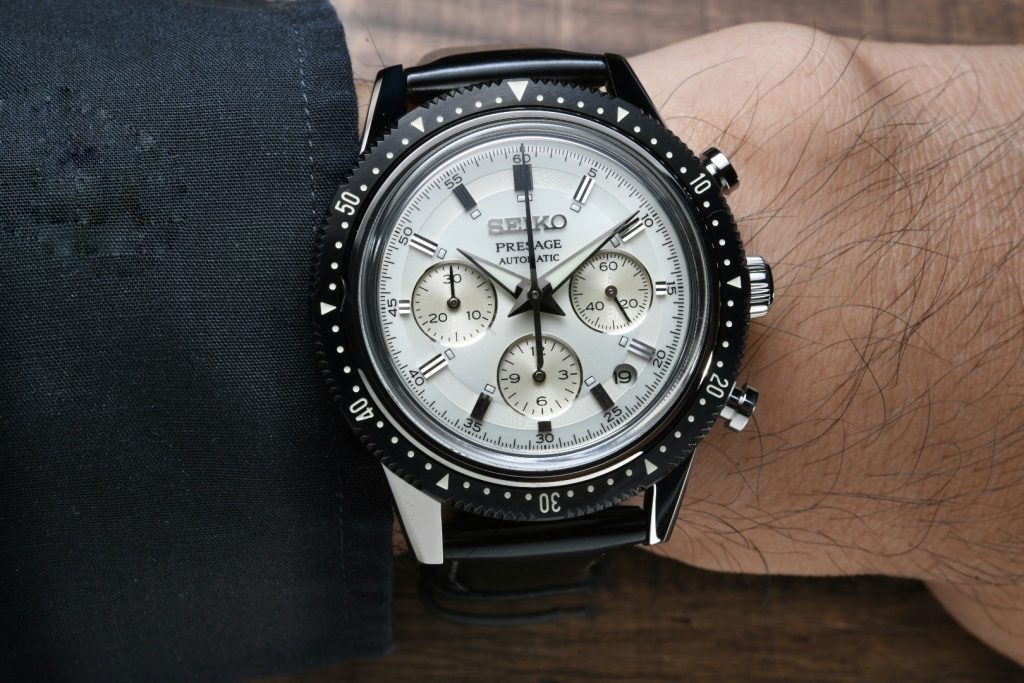 On the wrist the 42.3mm size is just perfect, sitting nicely on a cordovan leather strap with three fold deployant buckle. Functionally, it has everything one could hope for, chronograph, date and rotating bezel. Horologically it comes with a nice movement with premium features in the form of the column wheel and vertical clutch, and some of Seiko’s signature Zaratsu finishing on the lugs and a super hard stainless steel case.. Lastly, there’s the inspiration of the design coming from an important historical model in Seiko’s archive, and in sum, it’s a recipe for a watch that will sell out and sell out fast. 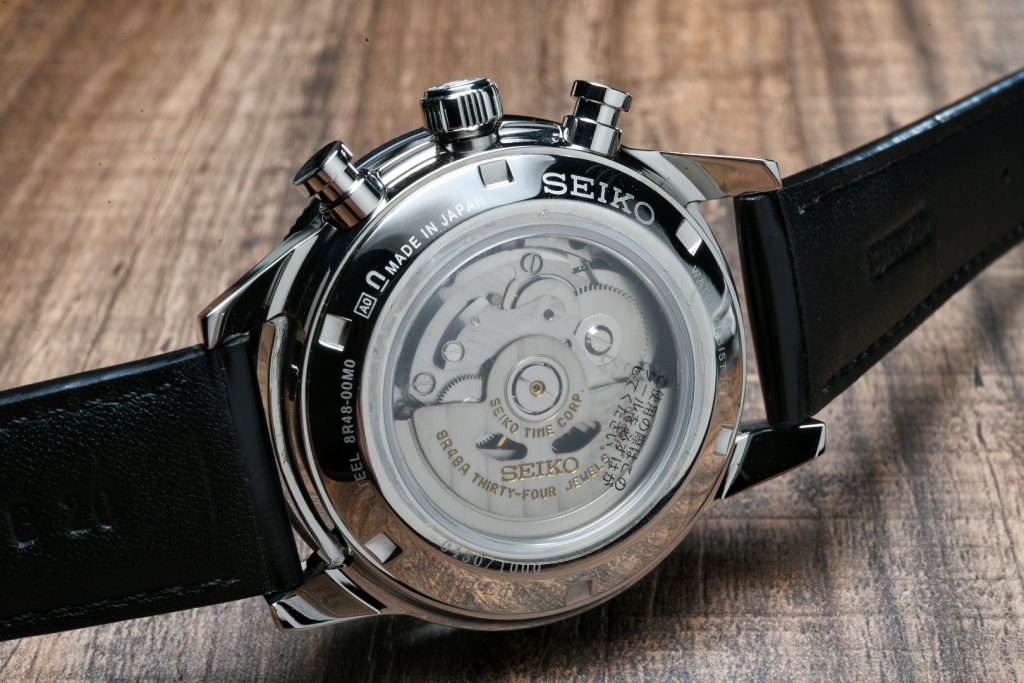 I hope to have a look at the Prospex model next time if I can get my hands on one. Certainly, it’ll be interesting to compare the experience, given its more modern looks and the stainless steel bracelet. For now though, the Presage model, well I love it, and given its reasonable Singapore price of SGD$5061.10 given the total package of all that is on offer, might be something to consider seriously. 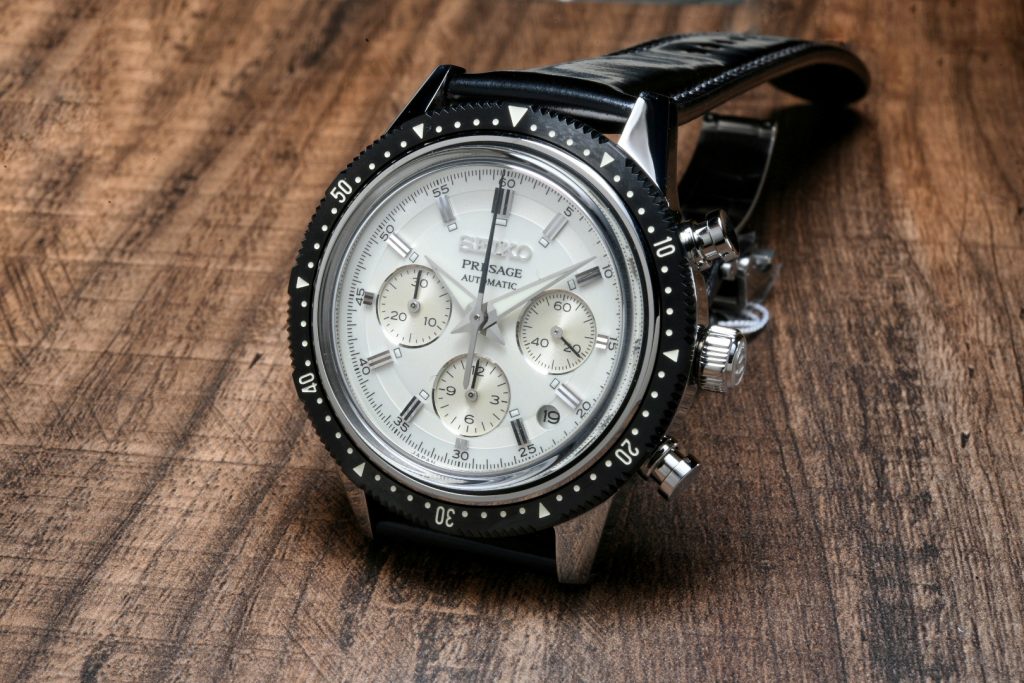