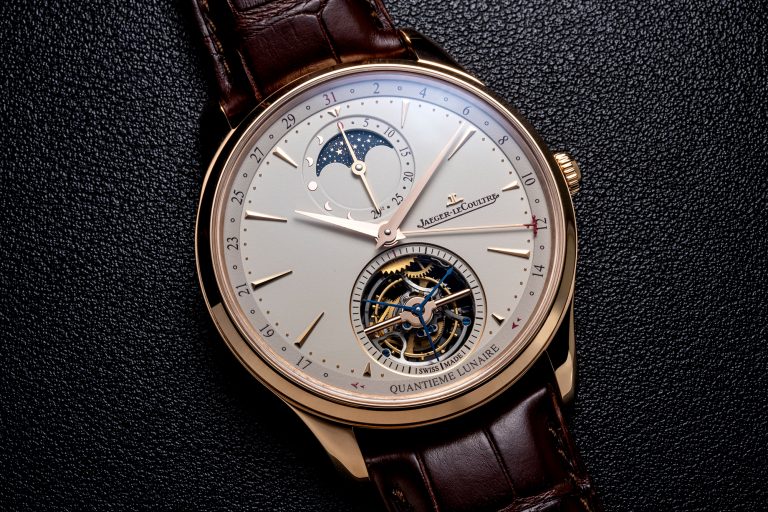 For the longest time, Jaeger-LeCoultre has been known as the “Watchmaker’s Watchmaker” – and rightfully so, with its reputation for supplying even the biggest watch maisons with their movements. However, from the nineties to today, the brand has been establishing itself in its own right, creating modern horological masterpieces such as the Gyrotourbillon 1, and the Gustav Klimt inspired Reverso watches and Atmos clocks. The brand has successfully incorporated watchmaking and decorative art techniques under one roof, and this expertise shows itself in the myriad of creations available today.

In November 2020, Jaeger-LeCoultre unveiled the Master Ultra Thin Tourbillon Moon –  a twist on what is considered their most elegant tourbillon watch.

The Master Ultra Thin case design used for this watch harks back to the elegant dress watches of the 50s and early 60s, whilst highlighting the craft of casemaking with a polished bezel and bevelled lugs. The case is executed in what Jaeger-LeCoultre terms as “Le Grand Rose Gold”, which, similar to Omega’s Sedna Gold or Rolex’s Everose Gold, is more resistant to colour fading, due to the addition of palladium to the mix.

The eggshell dial, dauphine hands and gold applied markers add further refinement to its aesthetic, whilst bringing attention to the tourbillon and moon phase display. Important information such as the “JL” logo date indicator hand, the 31st of the month and the beginning of the moon phase cycle are highlighted in red, giving a small splash of colour to an otherwise conservative dial. The dial exposes the tourbillon at 6 o’clock and has the moon phase indicator at 12 o’clock. All of this combined gives the watch an elegant, refined look, whilst suggesting that there is a horological powerhouse lying beneath the dial.

In modern watchmaking, Jaeger-LeCoultre has come to prominence in some ways for the performance of their tourbillon calibres. At the Concours d’Chronometrie in 2009, Jaeger-LeCoultre entered their Master Tourbillon, housing the Calibre 978, that featured a much higher beat rate (28,800 vph) than most tourbillons, a titanium tourbillon cage to optimise the weight of the cage, and automatic winding. These, coupled with some fine adjustment by the watchmakers meant that it took out the competition that year, placing first out of all divisions. The Master Ultra Thin Tourbillon Moon utilises these characteristics, and adds new functionality to the watch with its Calibre 983.

The moon phase display of the watch displays the Northern Hemisphere information in the aperture, whilst simultaneously displaying Southern Hemisphere moon phases to the left of the indicator. The age of the moon is shown to the right of the moon phase display, and is synchronised by virtue of the double-ended hand. The date display is rather unusual in that the indicators for 15 and 16 are separated by the Tourbillon.

So that the view of the tourbillon is unobstructed, the date hand is engineered so that it jumps clear of the aperture during the changeover. Its tourbillon also takes after its base calibre 978, in that the cage is made of titanium, and shares its beat-rate of 28,800 vph. Shown through the sapphire crystal caseback, the finishing can be observed, with its “soleil” Geneva Stripes that appear to emanate from the centre of the tourbillon bridge and getting wider towards the movement’s periphery. The pink gold rotor is also finely decorated, with mixes of polished and frosted finishes.

As with all watches coming from La Grande Maison, the watch is subjected to the Manufactures 1000 Hour Control testing methods, simulating real-life wear, as well as being delivered with an 8 year warranty.

The Jaeger-LeCoultre Master Ultra Thin Tourbillon Moon adds a poetic complication to a watch that offers serious horological bragging-rights, whilst remaining an elegant and refined choice for those who like their watches to fly somewhat under the radar, or hidden beneath a cuff for one’s own enjoyment.