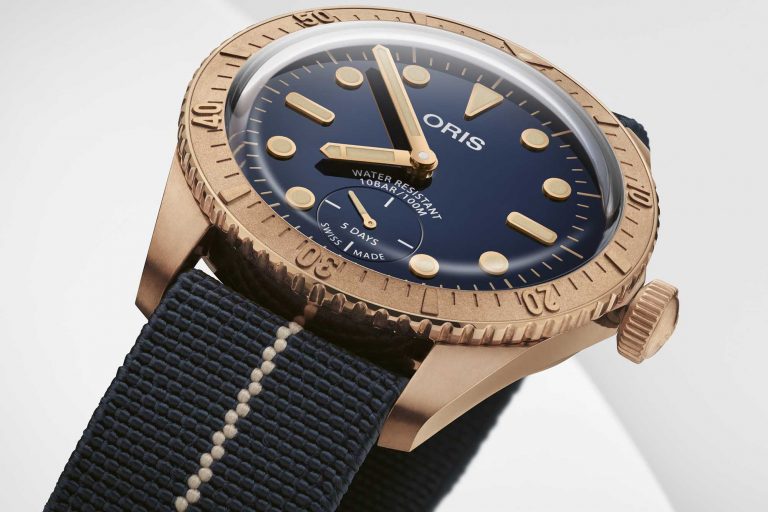 In today’s digital, fully connected, omni-channel ecosystem, the world of watches remains analogue and somewhat disconnected from this digital network – in some ways, rightfully and delightfully so. The universe of horology in the 20th Century is steeped in stories of human endeavour – exploring the deepest depths of the ocean, to far flung and inaccessible areas of our planet, as well as hostile environments. To fans of these stories in watches and watchmaking, it is no secret that Oris is famous for creating watches that represent a great sense of functionality paired with value-added watchmaking – ready to take on the world, accompanying the wearer’s journeys through life. In 2021, Oris releases its third edition of a watch that pays tribute to one who has lived an extraordinary life, and one who has been the master of his own destiny – the Oris Carl Brashear Cal. 401 Limited Edition.

Carl Brashear’s life cannot just be summed up in a few paragraphs, and so whatever is written here is only the tip of the iceberg.

Carl Maxie Brashear was born on January 19th 1931 and is most famous for his career in the US Navy. He enlisted in 1948, just after the desegregation of the military, and entered the US Navy Diving and Salvage School. With the beginning of his career being right in the midst of the American Civil Rights Movement, Brashear encountered severe racism from his colleagues, taunting him during his time in the School. This would not phase him however, and he became the first African-American to become a US Navy Diver.

However, in 1966, an accident during the Palomares Incident would change his life. A nuclear warhead had been lost off of the coast of Palomares, Spain, due to an aircraft collision during mid-air refuelling, and Brashear was part of a team that was on the search for the missing weapon. During recovery operations, a towing line broke loose and struck Brashear in the leg below the knee. With complications during his recovery, the leg was eventually amputated. Even an injury such as this would not break his focus on his dream, and in April 1968, one year after his release from hospital, he would be the first amputee to be recertified as a US Navy Diver. He also became the US Navy’s first African-American Master Diver, and served until 1979, where he retired at the rank of Master Chief Petty Officer. Upon his death in 2006, his son, Phillip M. Brashear would set up a Foundation in his name to help US veterans.

The Oris Carl Brashear Cal. 401 Limited Edition is made to support the Carl Brashear Foundation, with proceeds going towards their mission of benefiting veterans hospitals and aiding in their rehabilitation efforts. Limited to 2000 pieces, the watch case is crafted entirely from bronze – from the case to its bezel engraved in relief. This bronze construction serves two symbolic purposes – to pay tribute to the bronze diving helmets worn by divers like Brashear during his time in the Navy, but to also take on the life of the wearer.

Bronze cases acquire patina according to the habits of the wearer, and so by wearing the watch, its appearance will evolve with time. The caseback is in stainless steel, with an engraving of a period diving helmet, also in relief akin to its bezel.

The strap is a watch collector’s favourite – a woven strap made by Erika’s Originals. Made out of a woven elastic nylon webbing, the strap is reminiscent of military watch straps made out of parachute static lines and its hardware matches the watch case material – made out of bronze.

Its navy blue dial has a great depth of colour, accentuated by golden applied hour markers and hands as well as a gilt minute track. Unlike its predecessors (a chronograph and a central seconds, time only version) this watch also features a seconds subdial instead of a central seconds hand for its time-only display. This little detail is what separates this model from all that came before it.

Powering the watch is the Calibre 401, based off of the Calibre 400 released the previous year in 2020. This new calibre takes the sensibilities from the previous model, including its 5 day power reserve, anti-magnetic resistance, as well as a 10-year warranty – an industry leading guarantee.

The watch is symbolic of the man it pays tribute to. Classic and regimented upon first glance, however with wear, it will tell a story of the life of the owner. While the case will age, it’s striking blue dial and golden hands will not, akin to the unwavering resolve of Carl Brashear. The tough appearance and functionality of the watch ensures its survivability with its owner, constantly reminding them that “It’s not a sin to get knocked down, it’s a sin to stay down”.

The Oris Carl Brashear Cal. 401 Limited Edition, then, is more than just the sum of its parts – the story of the man who inspired the watch, as well as the foundation that it supports, enables the owner to know that they have made a difference to a veteran’s life. In combination with the way the watch is executed in a material that evolves with time and its cutting edge movement, it makes for a compelling value proposition – a well crafted watch that does the world some much-needed good.