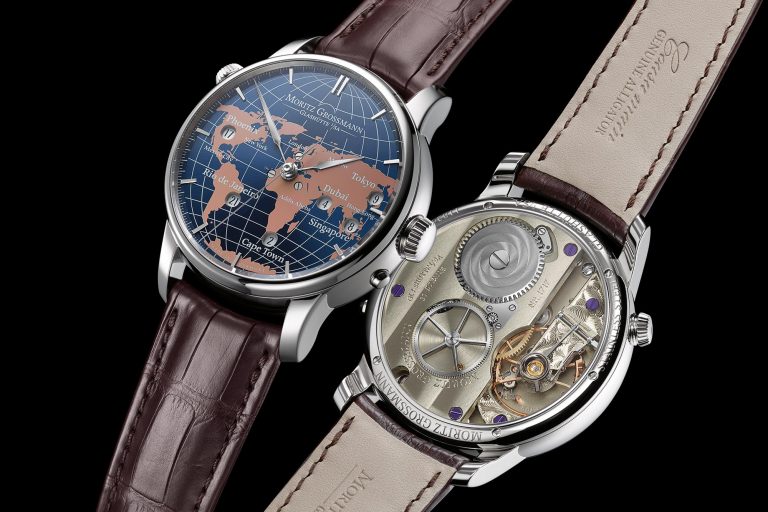 A look into the ingenious conception of a traveling complication

As the world starts to open up, the days of GMT watches being irrelevant to our lives seem to be fading away, and travel has become something that most of us can look forward to in the near future. This makes the new UNIVERSALZEIT by Moritz Grossmann the perfect watch that one might consider acquiring in preparation for our upcoming journeys.

The UNIVERSALZEIT – translated as “Universal Time” in German is an exceptional watch and an example of the out of the box thinking that I have come to appreciate from Moritz Grossmann. Now this watch is not strictly a worldtimer, but you could very well think of it as one given the ingenious way that it works. Somehow through the design it manages to be more useful than a typical GMT, and yet get close enough to a worldtimer in utility and function, and does this through unconventional means.

Consider the story of how I tried to understand it when I was first told about it last week and shown only a picture of it.

Normally when I look at a new watch, I am quickly able to determine how it works, based on the many watches I have already been familiar with in the past. The Universalzeit was different. It looked like a worldtimer of course with its world map on the dial labeled with cities on it, but there wasn’t the typical city ring or 24 hour ring around its periphery that would move to indicate the time in a different time zone.

Instead the dial contains a number of small circular windows spread around seemingly showing the hour at that labeled location on the world map.

I pondered the mystery for some time and it was getting increasingly uncomfortable that I could not solve it. Then suddenly I formed a theory. I remembered one of my favorite watches from Moritz Grossmann that I have covered before, the GMT, which used an ingenious finger pointer moving around the edge of the dial pointing at a 24 hour scale. That mechanism was surely the key. If there was a disc under the dial that would jump 15 degrees every hour like a normal GMT hand would, then this might be how the watch would work.

Of course I didn’t know if it was correct because I couldn’t figure out in my mind how that disc would look like, and how all the hour numerals could be aligned.

Well sure enough, after some digging through the press release I came across this picture of that very disk.

It turns out that I was correct. The disc does jump 15 degrees – (it’s 360 degrees divided by 24 hours after all), and here is how the numerals were printed. It’s simple when you understand how it works, the genius part is coming up with that idea in the first place.

So my next question was, why were the cities shown on the dial chosen? There were some that had larger fonts and were directly next to a window, and others that were smaller that were not.

Well, it turns out that my initial guess – that these cities were the location of Moritz Grossman dealers was incorrect. The real reason is more pragmatic, and is because these cities are not affected by daylight savings time. This means that the time indicated in the windows next to them would be stable throughout the year. These cities include – Phoenix, Rio de Janeiro, Cape Town, Dubai, Singapore and Tokyo

The other labeled cities are on the map, perhaps as a way to help users guesstimate the time there with reference to the other cities that have windows and are as follows: New York, Mexico City, London, Addis Ababa, London, Moscow and Hong Kong.

What we have here is a watch that has a GMT complication as its basis, but extended upon in function through the imaginative rethinking of the display elements such as the dial and the disk. What can I say? Bravo!

How do you set the time with this watch then? It’s quite simple actually. All you do is choose a timezone you would like to set first. Say Singapore, and adjust the crown at 3 o’clock such that the current time is the same as the time in the Singapore time window on the dial. Ignore the main hour hand for now. Once Singapore time is set, you have also at the same time, instantly set all the other timezones in the world.

Then using the crown at 10 o’clock, you turn it to jump the hour hand to the correct time where you are locally. Then you’re set, and all without disturbing the hour numerals in the city windows on the map.

How do you use this watch while traveling then? Well, if you want to set your main hands to the local time, use the crown at 10 o’clock again, and jump the hour hand to the correct time, without disturbing the rest of time time-zones shown – just like a normal true GMT watch.

Aesthetically this launch model comes with a galvanized dial base with a sunray finish in a luminous blue tone for the water of the oceans, which contrasts nicely with the salmon-coloured continents. Although like many worldtimers we have seen before, this is a model that is ripe for new variations, which should be interesting to see in the future.

Now just to be clear, this watch is not a limited edition, but is a new model in the standard collection. However it premiered yesterday (23rd Feb 2022) with Sincere Fine Watches, a respected watch dealer that has just recently acquired the rights to represent Moritz Grossmann in Singapore. Because of this, the new UNIVERSALZEIT  (priced at SGD 76,500 including taxes) will be exclusively showcased in Singapore at the Sincere Fine Watches boutique at Takashimaya S.C., unit 01-12 from the 23rd February till the 23 March 2022.

Contact them if you want to have a look at the watch now if you’re in Singapore, or if you are elsewhere, your local dealer should be able to have it after the exclusivity period is over.

Jewels: 31 jewels, of which one in a pressed gold chaton

Crystal/display back: Sapphire crystal, antireflective coating on one side