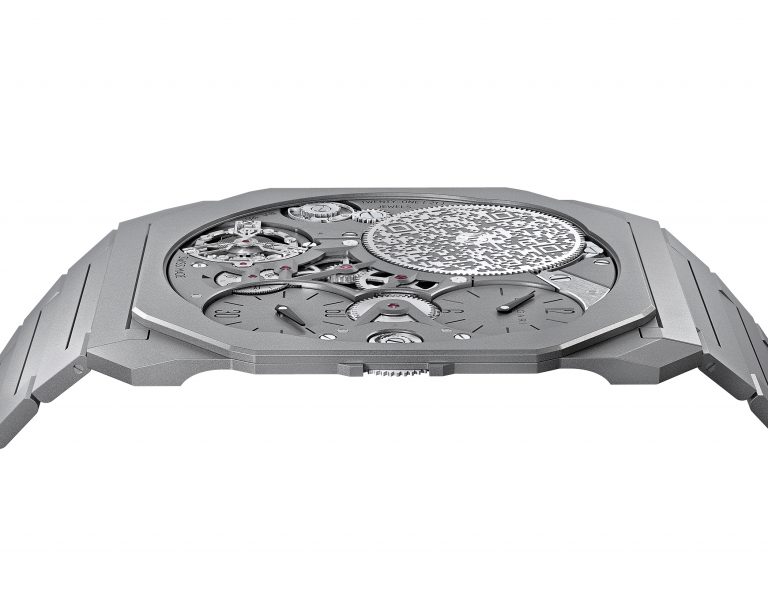 It is hard to believe that the Bulgari Octo collection has only been around for a decade. Perhaps it is the tendency for the Octo Finissimo collection to consistently break records, or the pedigree of its design that has led to it being the model of choice for those looking for that watch with a touch of modern casual elegance. Since the inception of the collection in 2012, the collection has broken no less than seven world records, including records for the thinnest perpetual calendar, thinnest automatic watch, and thinnest chronograph with GMT functionality. For 2022, befitting its ten-year anniversary, Bulgari unveils the Octo Finissimo Ultra – the thinnest mechanical watch ever made, coming in at an astounding 1.80mm, and proving to the world that less is truly more.

In order to create ultra-thin watches, tolerances must be squeezed, and full use of the geometry of the movement and case must be utilised to their fullest. It is also a display of how well engineers and watchmakers work together to create these pieces that offer a glimpse into the problems that engineers solve, and the skills that watchmakers possess to assemble these pieces.

For the Octo Finissimo Ultra, an additional constraint was added, in that the design of the timepiece had to adhere to the strict aesthetic codes of the Octo Finissimo case. With the amount of work that goes into engineering and assembling ultra-thin timepieces, one could say they are a complication in themselves.

The Bulgari Octo Finissimo Ultra measures in at 40mm, in an unusual combination of materials for its case – titanium and tungsten carbide for the base (more on this later). The case is impossibly thin – 1.80mm in thinness, giving the illusion of looking at a few stacked sheets of paper. Retaining its architectural design inspiration, the case still features its famous angular design, originally conceived by Gerald Genta. The dial is unusual in its layout – timekeeping indications are to the right of the watch, with the hours and minutes at the top right, and the seconds indicator at the bottom right. The left side of the watch appears to be occupied by a relatively large barrel with a QR code engraved onto it, and the balance wheel beating away at 28,800 vph. The hands and markers are black PVD coated to enhance legibility of the monochromatic watch, reinforcing the aesthetic codes of the Octo Finissimo Ultra. The watch is delivered on a titanium bracelet that matches the watch – impossibly thin, and its clasp re-engineered to accommodate the thin profile of the watch.

The BVL Calibre 180 powering the watch is quite literally the entirety of the watch itself – the baseplate of the movement is the back of the watch, which explains why it is crafted out of tungsten carbide. This material provides the much-needed rigidity that an ultra-thin watch requires for it to even be strapped onto the wrist. The rest of the case (the case-middle, bezel and lugs) are executed in titanium as separate components that attach to the tungsten carbide base. In developing this watch, many traditional components are rethought to save space within the movement. As such, some components need to serve multiple functions, with the dial becoming a place for time-telling, but also a place to hold components in place as a secondary function. Unusually, the crown does not use a traditional layout in a vertical position – rather, to keep the watch ergonomically sleek and its functions protected, the winding and setting functions are separated into two horizontally placed knobs, one for each function.

Curiously, the ratchet wheel features the engraving of a QR code. Bulgari has stated that this is a way for them to connect the physical and the digital, through the use of NFTs. The QR code will be linked to the watch, with an exclusive artwork to be supplied with each watch. The watch effectively becomes the digital “vault” containing this artwork, forever connecting art and timepiece. Overall, 8 patents have been applied for this watch alone. These include: watch glass assembly, barrel structure, oscillator module, differential display, modular case structure, bracelet, bimetal case middle-mainplate-caseback and software (presumably for the NFT technology housed within the ratchet wheel).

Limited to 10 pieces worldwide, never before has a watch been so connected to the past, present and future, and as we said before, Bulgari has proven that less is truly more with innovation in ultra-thin construction. The Bulgari Octo Finissimo Ultra incorporates watchmaking savoir-faire, the challenge-seeking engineers and modern artworks immortalised in NFT technology, making this watch one for the ages.