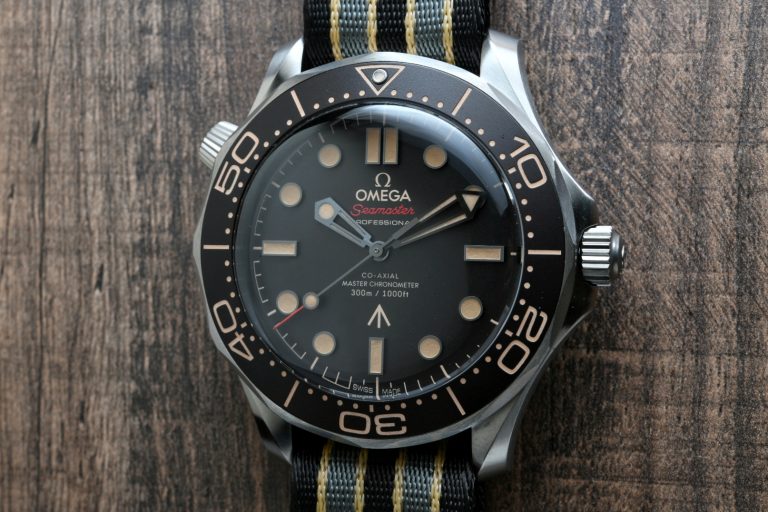 I’m all for watches released in conjunction with movies, particularly those with the kind of cultural cachet of the James Bond franchise. It’s always nice to see the kind of watch that a movie’s creators envision for a character, and part of the enjoyment is in judging if the choice made was the correct and astute one.

And while Omega might not have invented the movie watch, they did formalize the process thanks to Jean Claude Biver, releasing watches for fans so that they might be worn while watching the movie, a nice way to get into the shoes, or in this case, the wrist of a movie character. 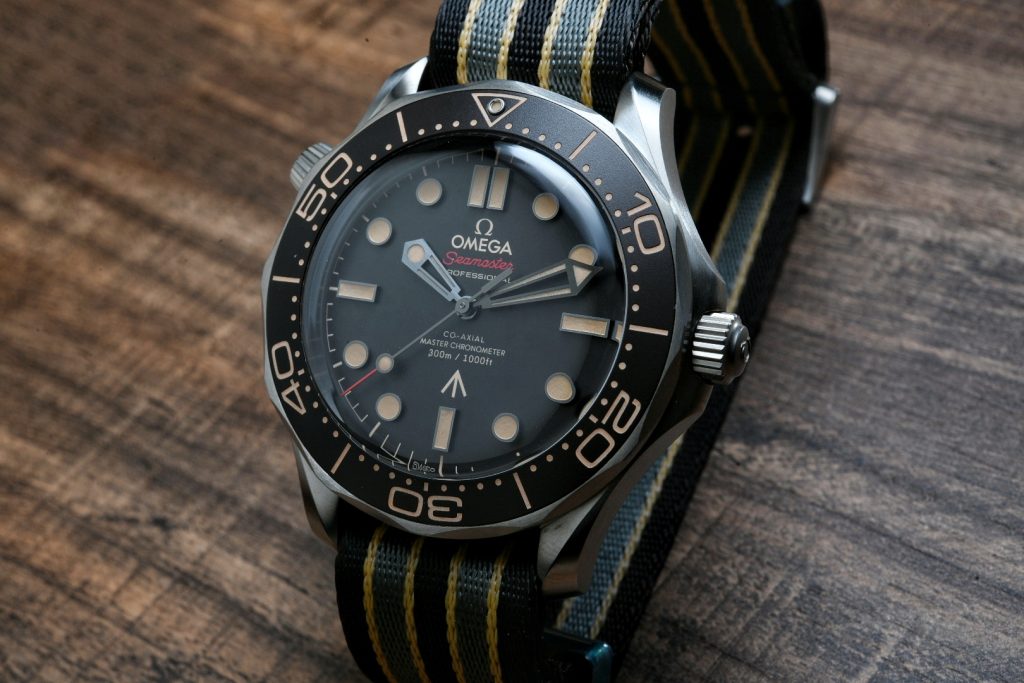 The last outing as Daniel Craig as James Bond in the new film “No Time To Die” this upcoming April is no different, with a new and specially designed Seamaster 300M that will adorn the character’s wrist.

While it might look like a regular Seamaster 300M, it’s the details that mark it out as something quite special and unique. Most significantly, it’s the fact that titanium is being used in this watch, the first time of any of the James Bond editions. Then there is the colour scheme that clearly gets its cues from the past, with beige lume on the indices and skeleton hands, and even in the hour scale markings on the aluminium diving bezel. 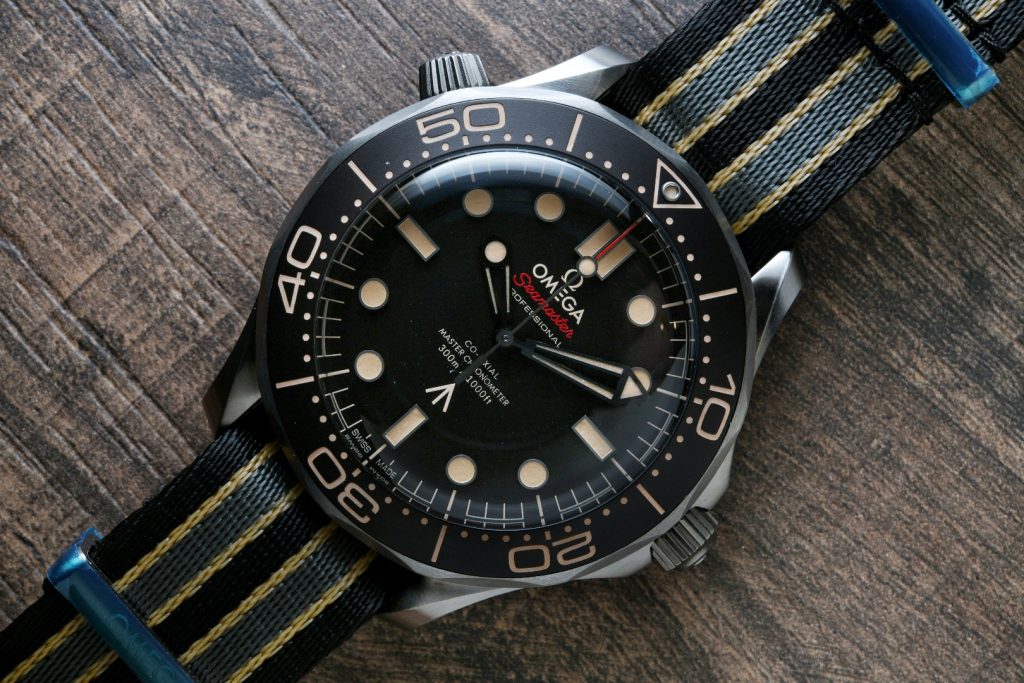 Something to mention about the titanium used, here, which is also in the titanium mesh bracelet on one of the variations of the watch, a first for the brand, it is Grade 2 rather than the more commonly used Grade 5. It was a bit of a head scratcher when this fact was revealed as Grade 5 titanium is harder and more scratch-resistant alloy than Grade 2. 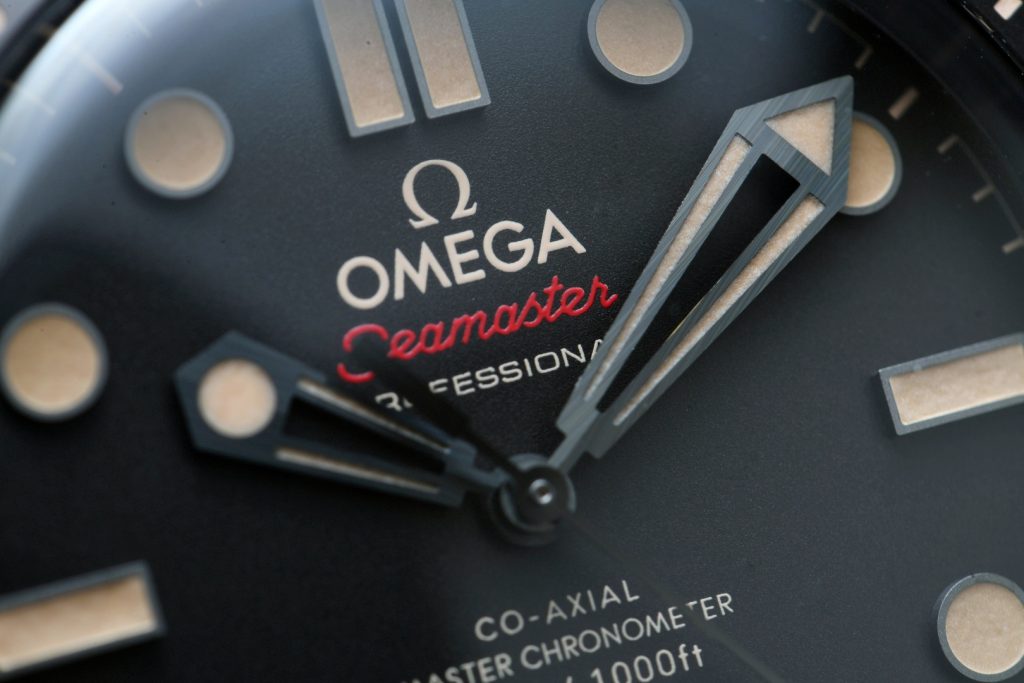 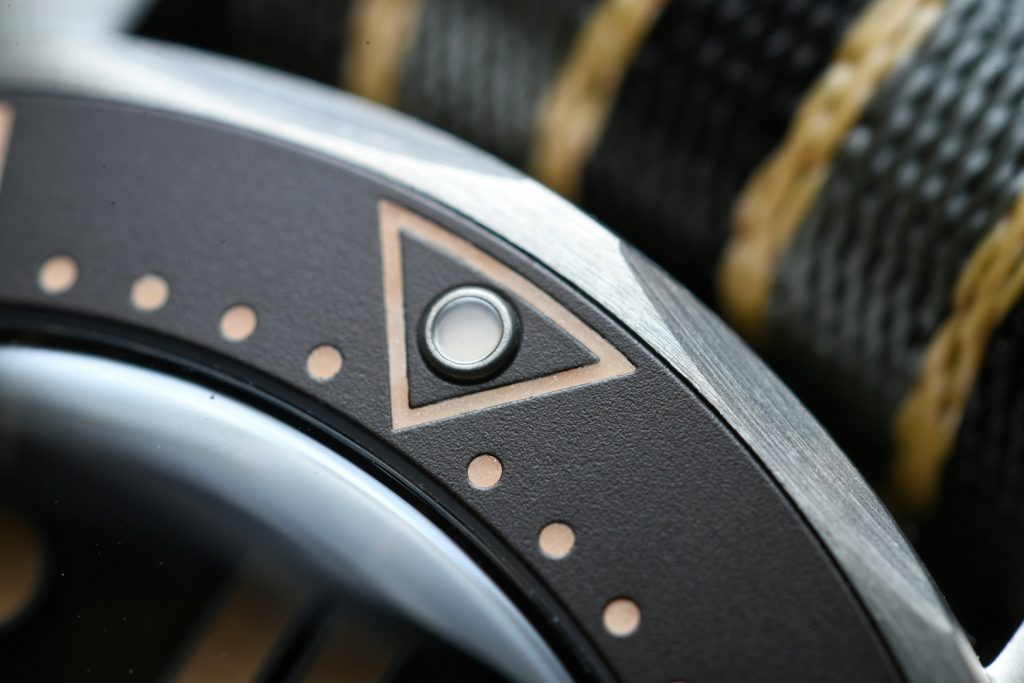 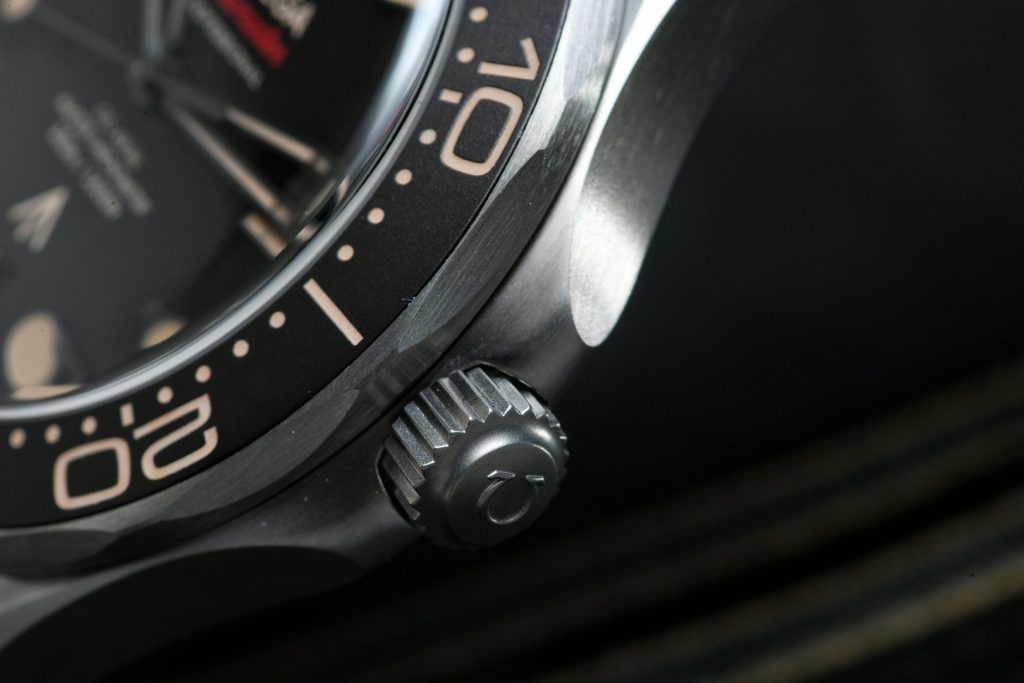 Aside from the fact that Grade 2 titanium was more commonly used in earlier titanium watches which aligns better with the watch’s vintage vibe, I’m guessing that that the reason it was chosen might have something to do with its excellent aqueous corrosion resistance against such chemicals such as calcium chloride, cupric chloride, ferric chloride, various concentrations of acetic acid, high temperature seawater, most organic media and more. 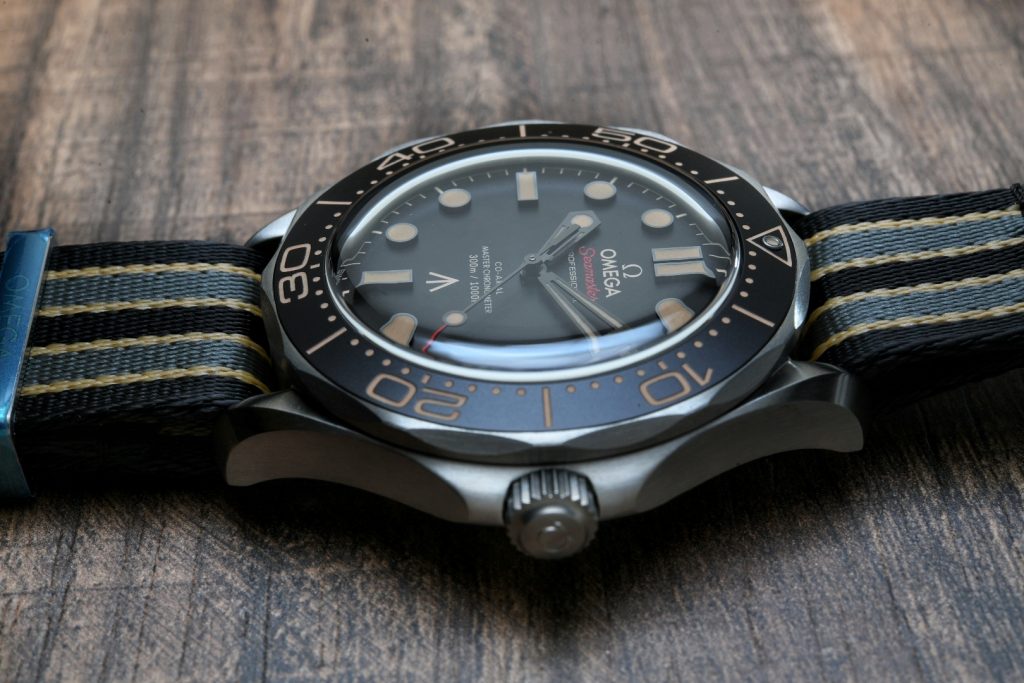 Perhaps the choice of the material might be saying something about the plot of the movie? I’m guessing we’ll have to wait till April to find out.

I wasn’t able to see the titanium mesh bracelet that is one of the options, but I was able to see this version on NATO style strap. Because the watch head is in titanium and with this almost weightless NATO strap, the entire package on the wrist feels almost like nothing at all, which is probably a good thing for James Bond as he runs from place to place fighting villains. It probably explains the reason why aluminium was used, instead of ceramic for the bezel insert, again, it keeps to the vintage vibe, and is probably lighter. 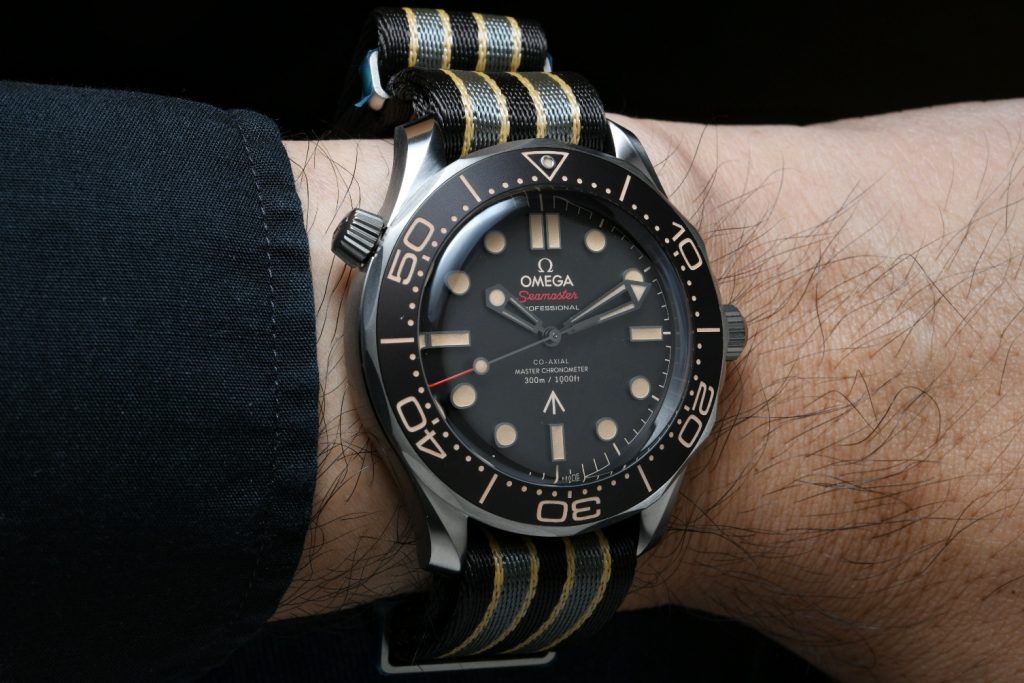 Of course fans of Bond movies will recognize the pattern on this NATO strap, as it appeared, (sized wrongly for its lug width) on a Rolex Submariner reference 6538 in the film, “Dr No”.

The watch also distinguishes itself by the markings on the dial and on the case-back, that emphasize Bond’s military background. Looking like a watch that might have been issued to Bond by the Royal Navy, there is, firstly, the broad arrow insignia underneath the dial text (to indicate that the watch is military property), then on the caseback, engravings that look like a mock Navy serial number. 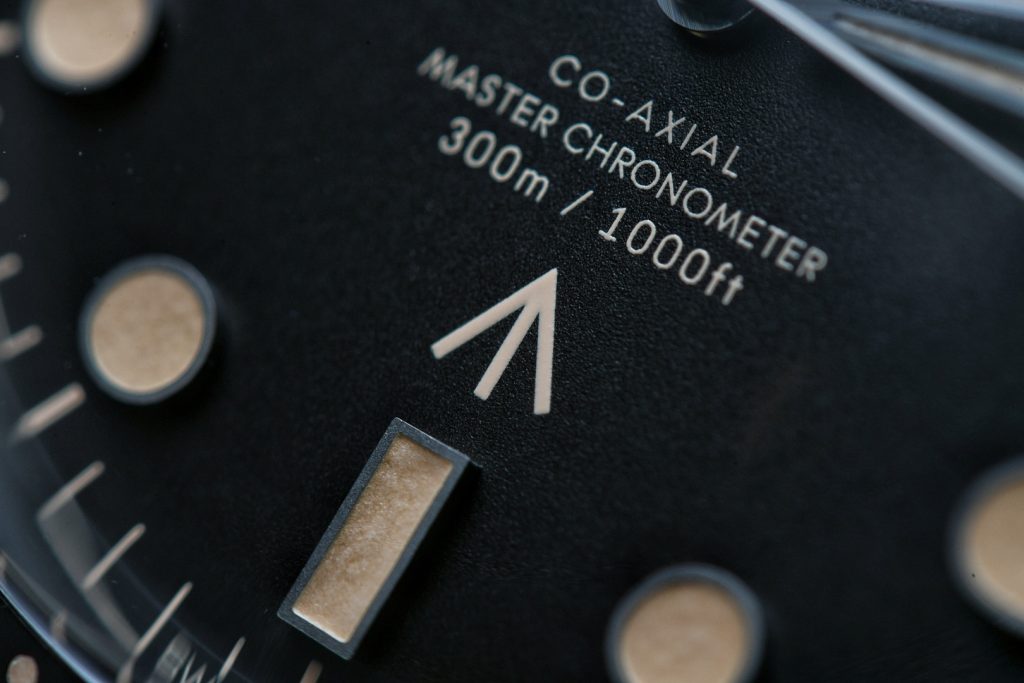 While it might seem a little disingenuous to place fake military markings on the watch, I’m all for it. It’s a movie after all, and we should have a little fun with our watches. What’s more, if spies like the one that Daniel Craig plays are real, the actual codes used now, would probably be different, so who cares. 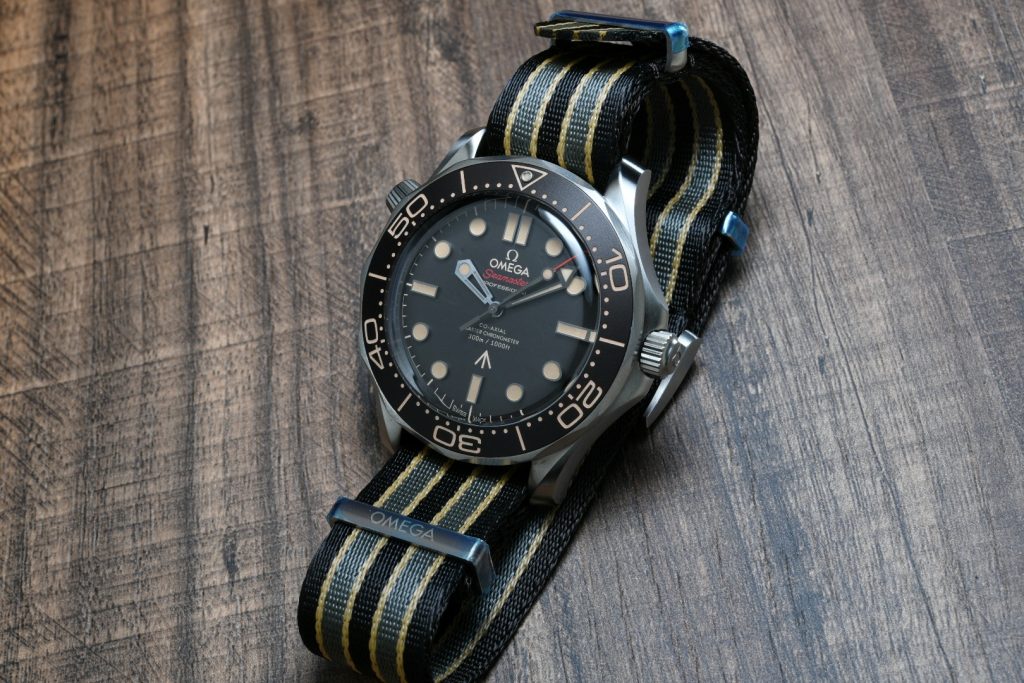 Lastly like the regular Seamaster 300M Diver: the watch uses the calibre 8806, which is a Master Chronometer, and therefore comes with all the METAS certified goodies like magnetic resistance, superior accuracy and durability among other things.

All in all, a very nice looking watch that is not a limited edition, and can therefore be purchased at Omega boutiques from this month (February 2020) in advance of the movie’s screening in April.