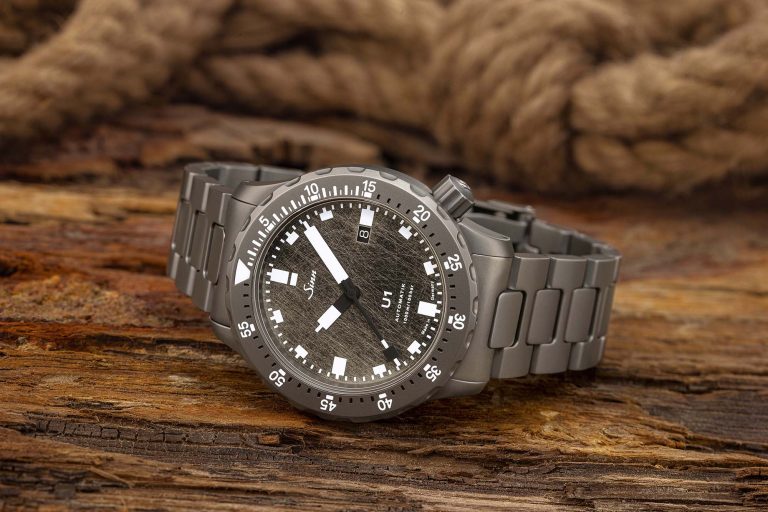 A handcrafted dial comes to the new Sinn U1 DS

2021 marks the 60th Anniversary of Sinn and for this year the brand will be releasing a series of extra special watches to mark the occasion.

The first model to be launched was just announced via a digital press conference today, and it is the new Sinn U1 DS, a fully tegimented diver made of the brand’s signature German submarine steel, but with a unique dial.

The clue is in the name – “DS” stands for “Dekorschliff”, a German word that roughly translates to “Decorative Grinding/Polish”. This is a new type of finish that is applied to the raw brass dial, which is galvanically treated twice before being hand scratched in random patterns to give an aged, weathered look.

Lothar Schmidt, Sinn’s Owner and General Manager, explained that the unique look had come about from a series of experimentations, to find new dial possibilities. This was one of the options that came from that process, and while the end result was beautiful, remarkable and very special, the company took some time to adjust to the idea of such a dial in a Sinn product. It’s easy to understand why given the austere, serious and technical character of the brand, but eventually they decided to go ahead with it.

If you think you’ve seen this type of dial finishing before you would not be wrong, as it has appeared in another watch that came out two years ago, the 356 pilot chronograph that was created in collaboration with Singapore watch retailer, The Hour Glass.

That being said, the new Sinn U1 DS is the first appearance of this type of dial within Sinn’s own product family, and it was chosen to be done given that it would not affect the technical function of the U1, which is Sinn’s premier and most iconic diving watch capable of 1000 metres of water resistance.

Legibility is maintained with the all white markers and hands, and even the bezel markings. The entire watch is monochromatic, and stunning, without a hint of colour as might be expected, yet it is uncompromised in its function as a diving instrument.

The ingredients of the Sinn U1 DS are to be expected. It comes with an in-house made (in the company’s Glashütte facility) fully tegimented, case, bezel, bracelet, clasp and crown, which is Sinn’s proprietary surface hardening technology that makes the watch scratch resistant to 1500 Vickers. This treatment is applied to all the parts of the watch made out of German submarine steel, a material that is, because it is used in submarines, is totally non-magnetic, and able to resist deformation pressure and tearing. Because of its strength, it is used in all U series watches, and can easily withstand 1000 metres (+25%) of water pressure.

The fact that the case is so strong and that it is scratch-resistant, is a somewhat interesting contrast to the fact that the dial is scratched, which does make the U1 DS seem a little playful in concept. Not too far though – it’s still a Sinn after all.

The watch is powered by the Sellita SW200 automatic calibre, with 38 hours of power reserve and with Sinn’s own proprietary oils. Round the closed caseback there are no engravings to suggest that this is a 60th Anniversary edition, but there is an engraving of the limitation number, out of 500 pieces.

All in all, it’s a cool new addition to the collection, and what’s interesting is how in such a serious instrument like this, there is an extra touch of a hand-crafted dial. As explained by Sinn, there is an element of skill involved in creating the dial, with special training required. The reason is that the scratching cannot be applied too deeply on the dial during the roughly 5 minute process, and a consistent pressure is required by the craftsman involved to maintain the look and style of the scratches over 500 watches.

It’s a great first start to 2021 for the brand, and I am told that the next big launch will come on April 1st 2021. In the meantime, have a look at the technical specifications of the new watch below, done in the detailed manner that Sinn is famous for.