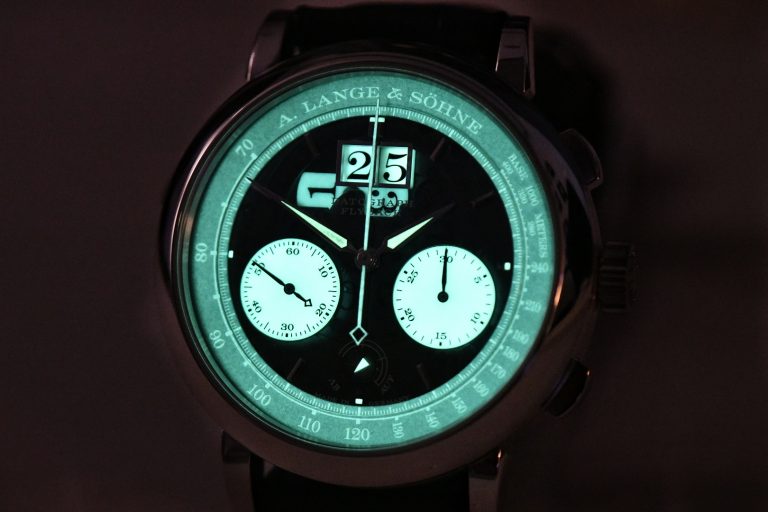 The Lumen watches from A. Lange & Söhne have always represented for me, the brand stepping away from the overtly classical, and venturing full bore into the realm of the cool. It was surprising when the first Lumen watch came out, with its signature glow-in-the-dark dial, for it dared to break the conventional notion of a traditionalist brand. 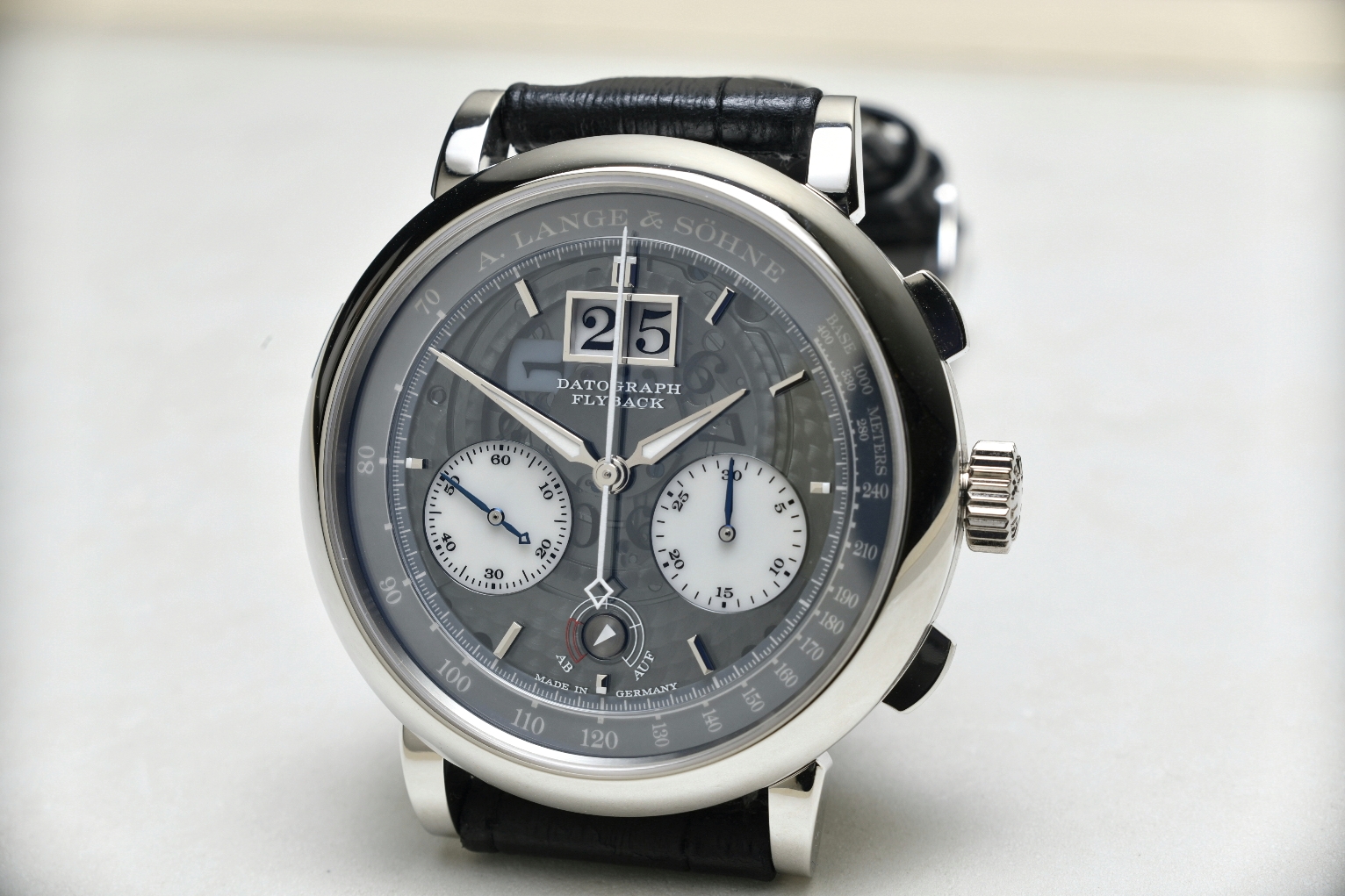 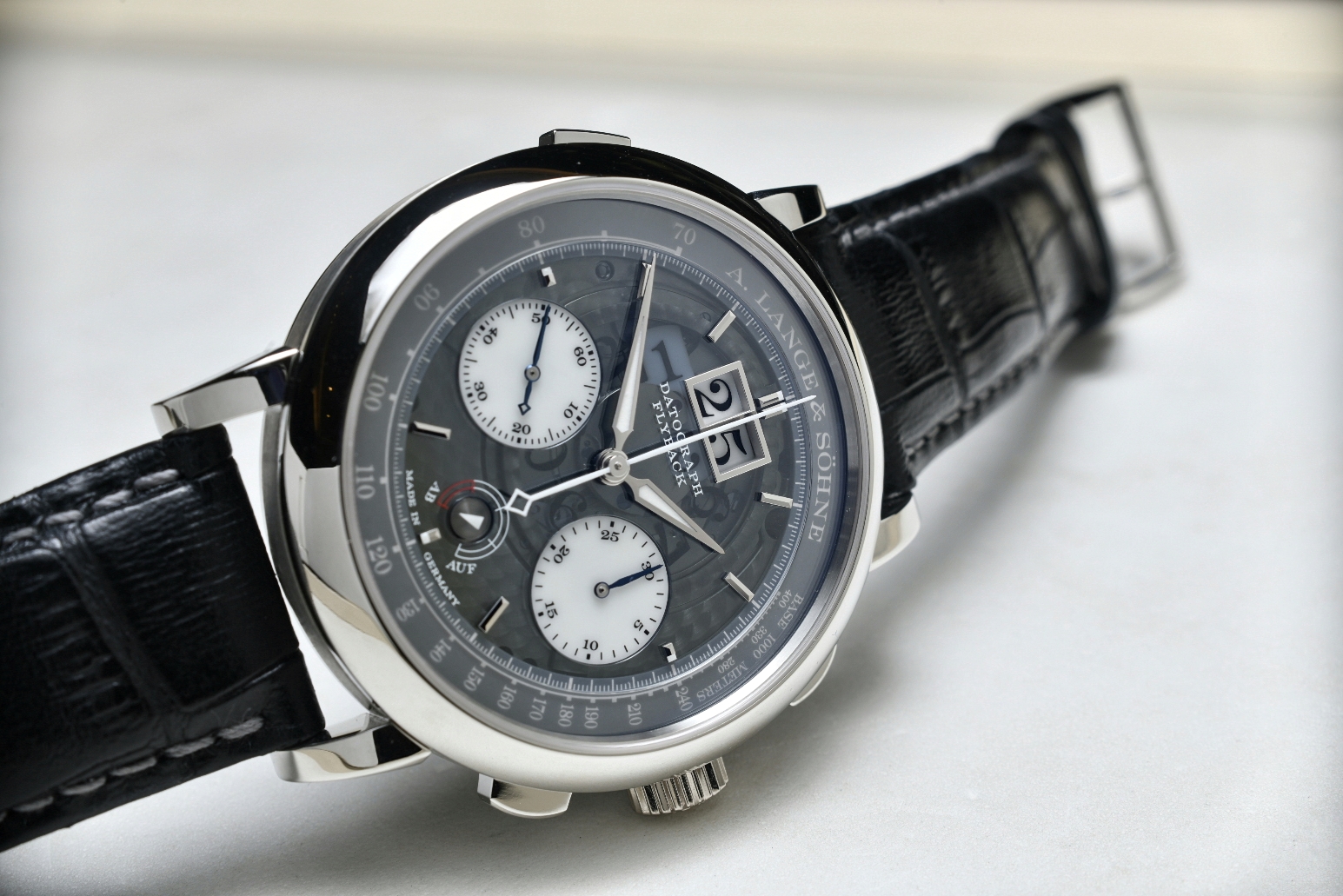 It was about time that it happened for the Datograph, the brand’s second most iconic watch (after the Lange 1 of course) as it held the basic ingredients that made it ripe for the transformation. One of the distinctive aspects of the Lumen family, are that all the watches have outsized date windows, or in the case of the Zeitwerk Lumen, outsized, hour and minute windows, all to assist in the party trick of the Lumen watches, allowing the date or (time for Zeitwerk) to glow bright under dim light due to the application of Super-Luminova. 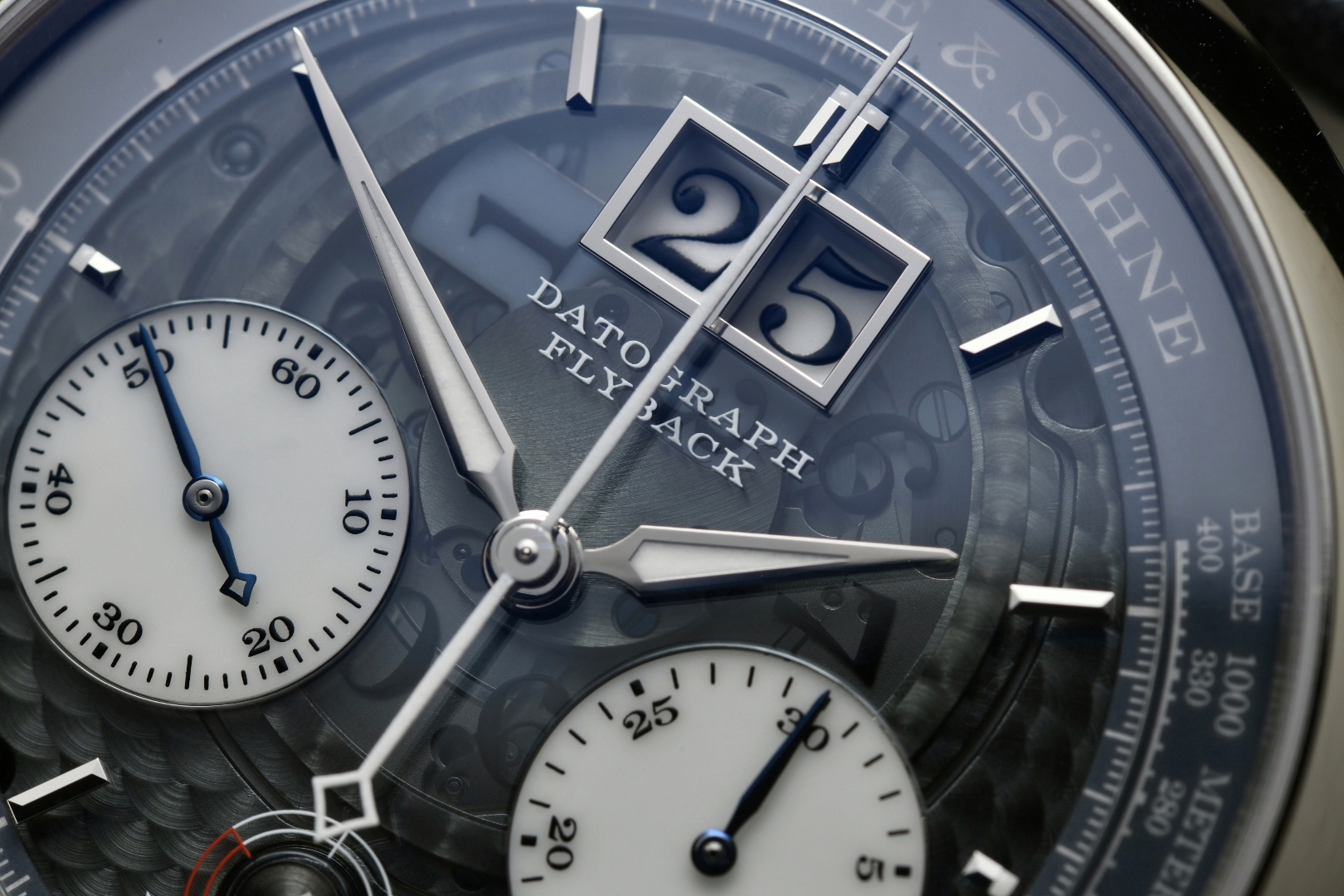 In the Datograph Lumen, the effect is achieved by a Super-Luminova coated date cross (for the tens of the date numeral) as well as a date wheel (for the ones of the date numeral) made of glass and rotating over a fixed Super-Luminova coated surface. This means that the numerals in the date wheel are effectively ‘backlit’ since it doesn’t glow per se. The translucent, grey-tinted sapphire dial, assists in helping the Super-Luminova surfaces become charged with light, especially with regards to the next numeral in line to be displayed. It also imparts a technical look to the watch, since the date mechanism that is normally hidden in the standard Datograph is now visible.

The Datograph Lumen as well seems to have the most amount of visual pizzazz in the dark, with much more Superluminova overall applied than the others in the Lumen family. Most notably the circular tachymeter track printed on a German silver ring, extending to the edges of the dial taking up a liberal portion of the overtly brilliant display in the dark. As well as the subdials and par for the course, Super luminova coated hour, minute, central seconds hand and the power reserve triangle. Basically then, fully charged, this is a chronograph that you can use in the dark. 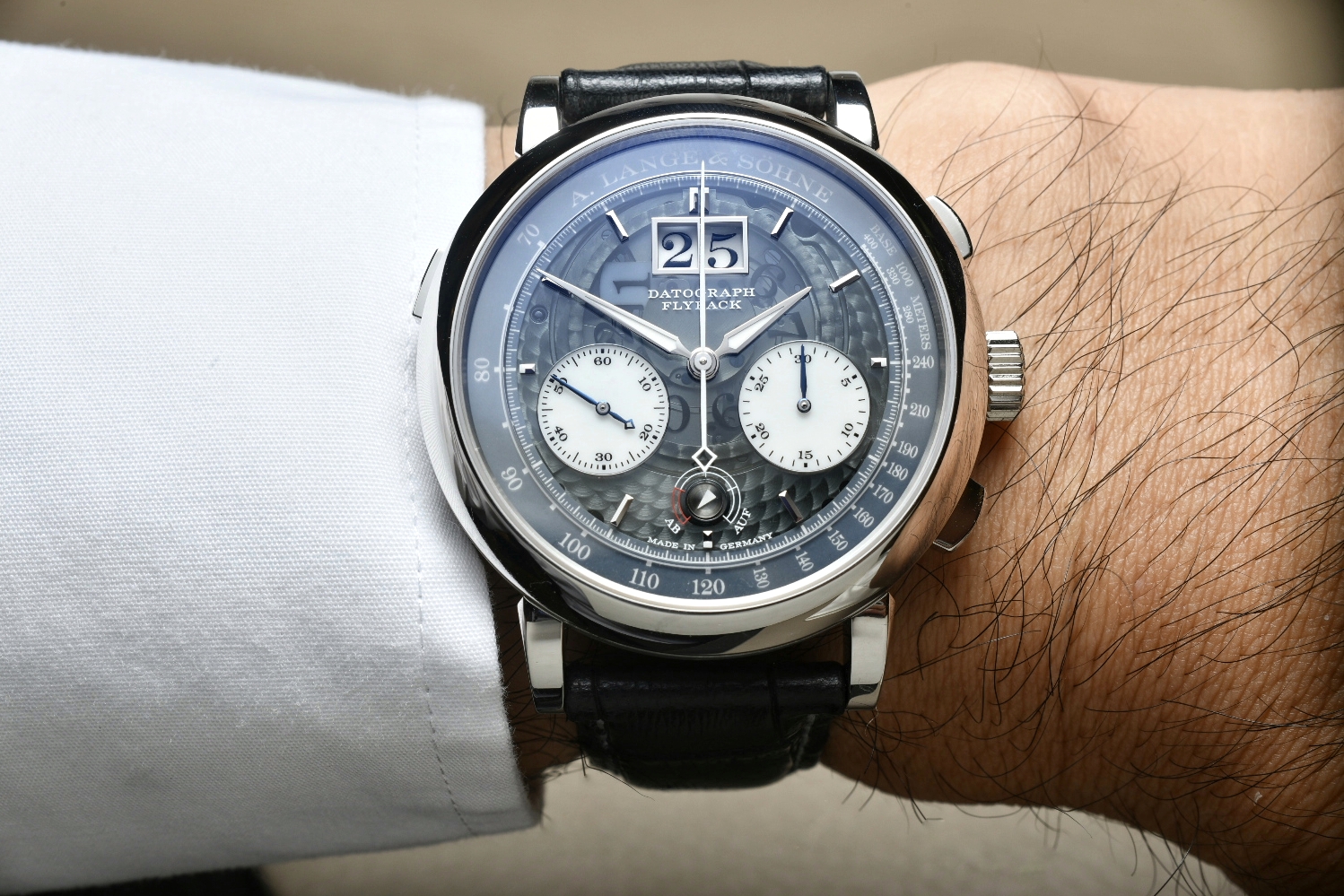 The case remains the same at 41mm in diameter compared to the standard Datograph Up/Down, but it is slightly thicker at 13.4mm compared to 13.1mm on account of the allowances required for the glass date cross.

The Datograph Lumen was launched to a positive reception in October 2018, with many of the 200 piece limitation being spoken for very early on. This was in stark contrast to the earlier Lumen watches, that had prompted some Lange fans I know to proclaim that the brand had “jumped the shark” by stepping too far outside the overarching classical style of the brand. 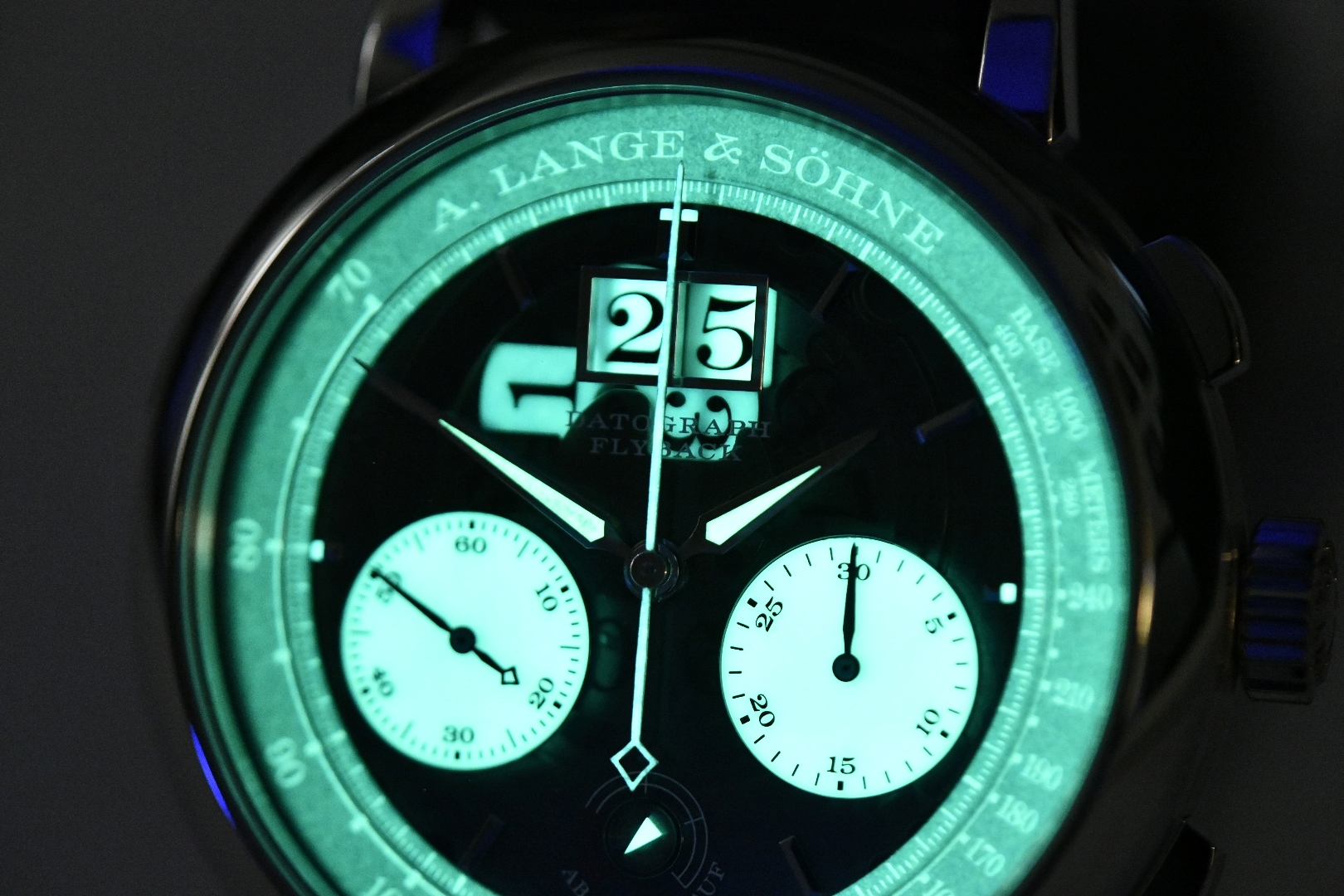 Yet I never understood such negativity. Certainly the watches from the brand are classical, but with Lange, the distinctiveness of the design is carved out from within the confines of its genre, making them recognisable if the logo were removed on most of their watches. With the specific watches chosen for the Lumen collection, they have designs that stand apart and on their own, making them familiar forms that transcend their classical roots. Add a little lume to brighten up the night, and we are allowed to see the shapes that we already know in a surprising light.

The next piece on my wishlist is the Datograph Up/Down and in most instances, I go for and prefer the standard model in the collection, since it usually has an aesthetic that drew me to want it in the first place. I find however that the Datograph Lumen is the first watch that I might be willing to stretch for (considering it’s higher price), since it takes the foundational attributes of the Datograph Up/Down that are already so good, and brings it up to a higher, and more desirable notch. In fact, I’ll take the Lumen any day over the standard Datograph and I’ll probably be happy with my decision. 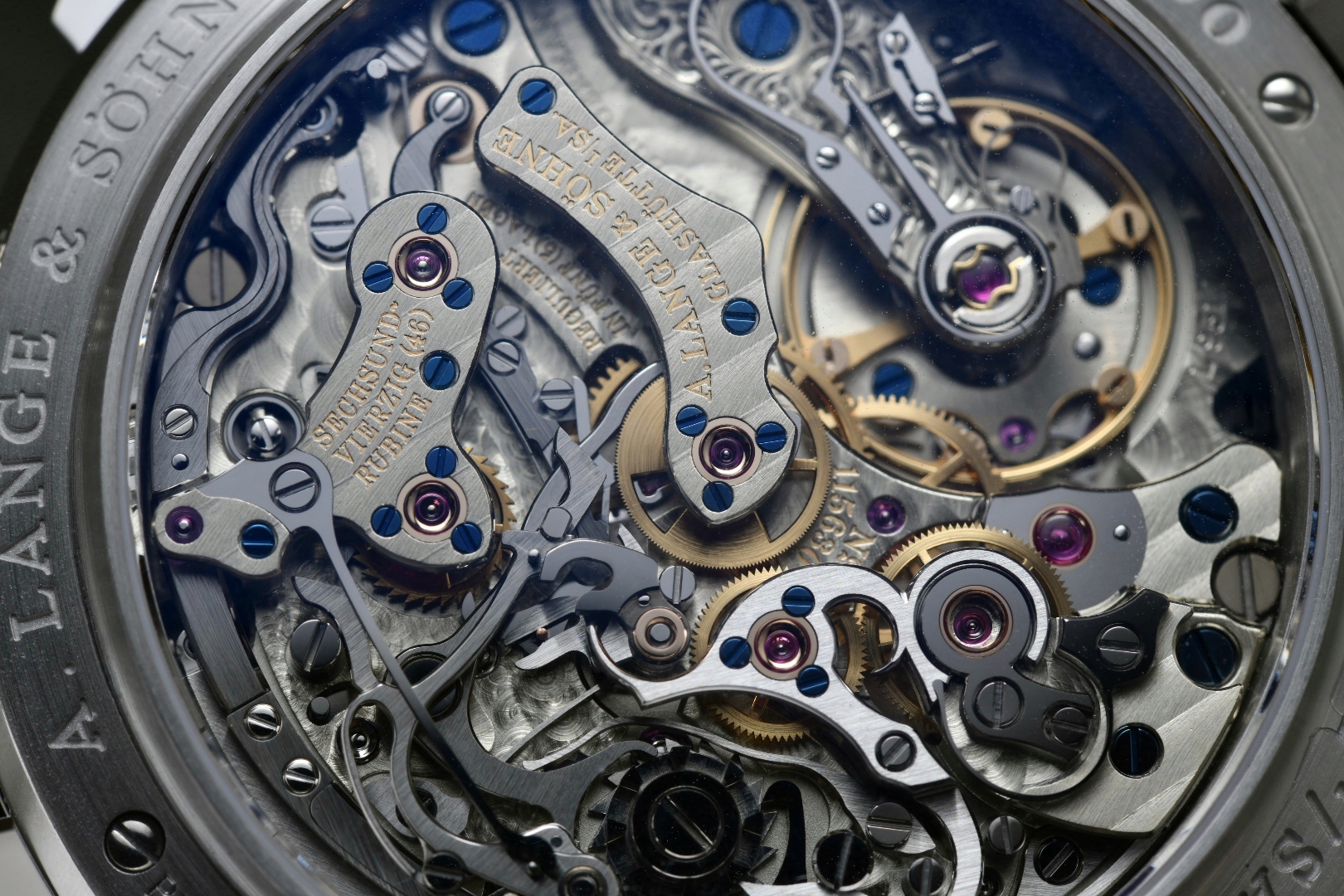