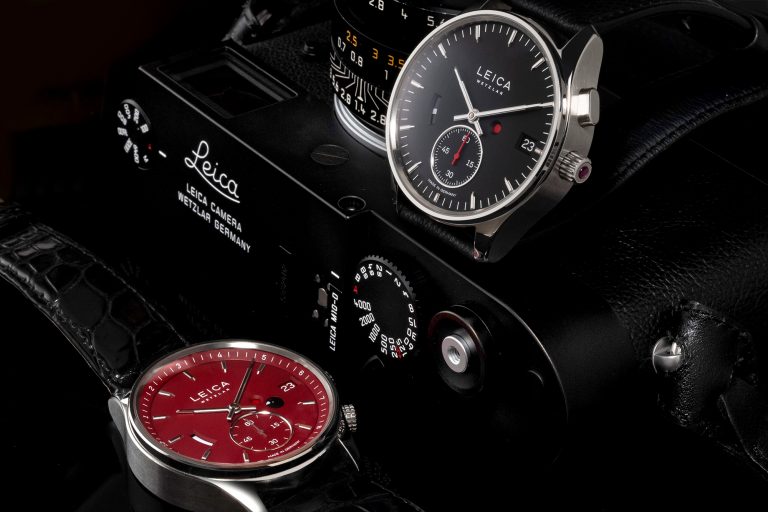 Leica Enters the Watch Game with the L1 and L2

Leica has just launched a new watch line with two models, the L1 and L2. To be clear, this is the same Leica that makes cameras, the same Leica that invented the 35mm film format as we know today as “full frame” in the world of digital camera sensors, and the same Leica that has produced cameras used by famous photographers who have produced the most iconic and recognisable images during the rise of photography in the 20th century. 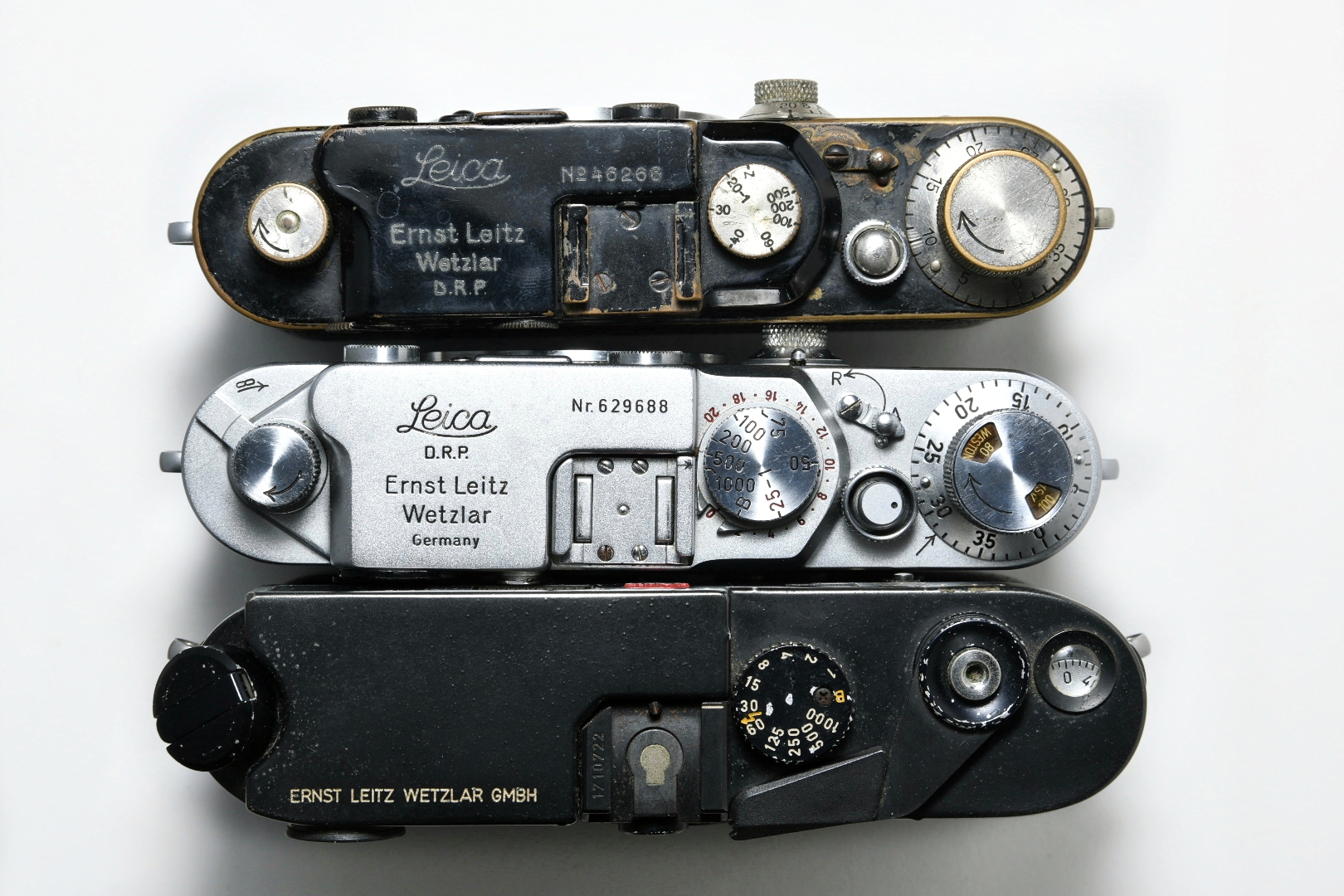 Having been a photographer for most of my life, and having owned a brace of Leica cameras, from the early pre-war screw-mounts, to the iconic M3, M4-P and M6 from their rangefinder line, and even today in the digital era with the MP-240, I was somewhat skeptical on being told the news that Leica had now entered the fray in another one of my fervent passions: horology.

Truth be told, it has been in my experience that when camera brands release watches, the results are not pretty. What is usually done is to slap on a logo on a silly quartz thing and call it a day. These are watches that might satisfy most, but certainly not me, or indeed many of the customers of Leica, who not only appreciate fine craftsmanship in the things they buy, but have the means to pay top dollar to get them.

Perhaps the closest watch in recent times that might have merited some attention was the Valbray EL1 Chronograph LEICA Limited Edition, which had a decent specification in the Valjoux 7750 chronograph movement that it carried, as well as a mechanism that operated like a lens aperture to cover up the dial and the chronograph sub-dials, leaving behind only the hour and minute hands. While it had a Swiss movement, and looked rather nice, the “feature” that it has was in all honesty, somewhat gimmicky, and nowhere near as interesting as what has been recently released. In fact it’s time now to calibrate one’s expectations, for the new L1 and L2 watches from Leica, not only up the game to a new level, but demonstrate a seriousness in expanding their already sterling brand equity to create other offerings of a similar level of appeal as their cameras.

What is the Leica L1 and L2 about then? Well they are not simple quartz watches with a Leica logo slapped on. Instead they are watches designed and built from the ground up, with horologically interesting movements, and a sound design aesthetic inspired by the design of Leica cameras, which were themselves products of the Bauhaus aesthetic. 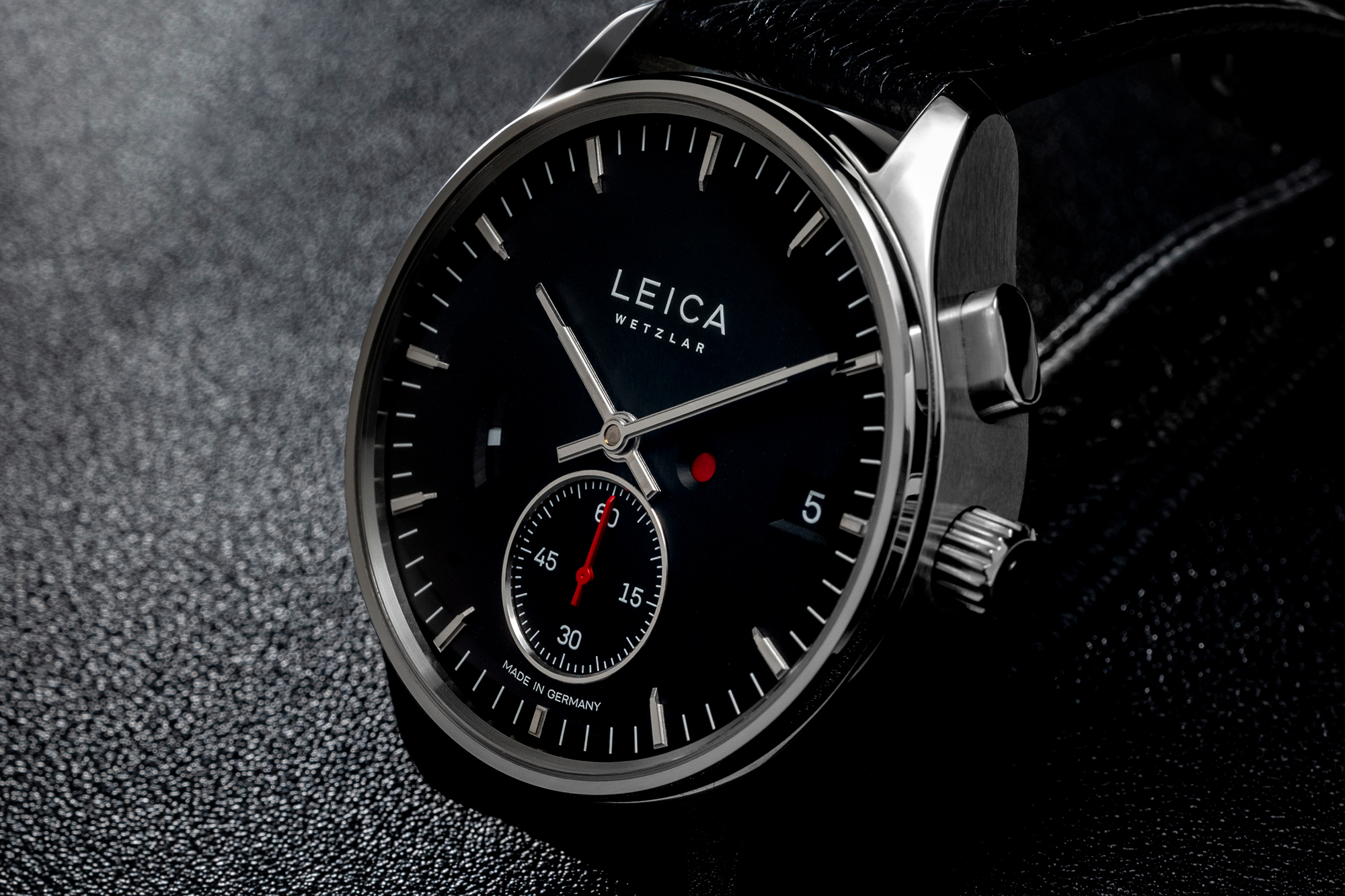 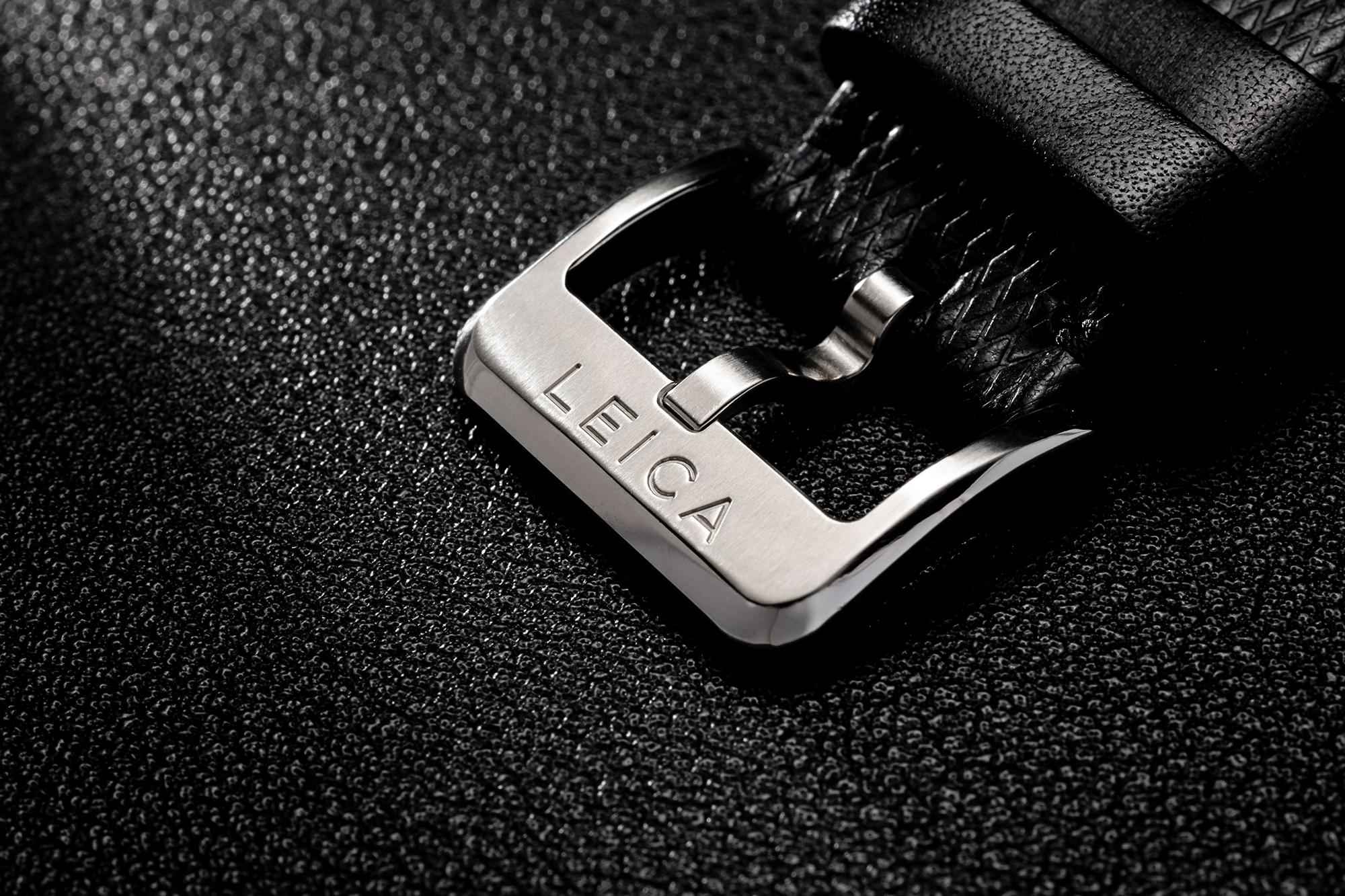 This “less is more”, and “form follows function” approach can be seen from the design of the dial, with all relevant indications clearly marked. Faceted hour indices and hour and minute hands make reading the time easy in all lighting conditions, since one of the facets is bound to catch the light, even in dim conditions. As well, the colour of the date wheel follows the colour of the dial, to allow the date numerals in white to be presented seamlessly.

There are other things that give an indication of what else the watch is capable of, such as the aforementioned date function being one that jumps on demand, and that is controlled by the pusher at 2 o’clock. With each push the date jumps one day, in a similar vein as the Lange 1 from A. Lange & Söhne, notably another German brand. As well, the crown, decorated by a red ruby reminiscent of the Leica logo that is in the form of a red dot, is not pulled out to engage its function, like you’d find in most watches. Instead, one pushes it in, like a camera shutter release button, to change the watch from winding/ normal running mode or time-setting mode. The dot indicator for this is just above and to the right of the small seconds counter, which changes from white to red when the crown is depressed.

When the dot indicator is white, it means that the watch is running, and that it can be manually wound via the crown as per normal. When the crown is depressed, the indicator turns red, and this causes the movement to stop and the red seconds hand to immediately jump to reset to zero. This of course allows one to adjust the time accurately to an outside signal. Lastly we have the power reserve indicator with gradually closing blades (like a lens aperture mechanism) that displays the amount of power reserve (of 60 hours) left by the length of a white line.

The above refers to both the L1 and L2 that are essentially the same. However the L2 has an additional GMT function, which is operated by the third crown at 4 o’clock that can be pulled out and rotated, that controls an inner bezel with a marked 12 hour scale.

The best part of the watch however has to be the movement, which lets face it, is something that you probably didn’t expect from a Leica watch. Certainly it has an industrial style finish and it is very handsome with the vital parts that it is composed of, the mainspring, gear train and balance wheel running at 28,800 VPH visible for all to see.

The Leica watch project, could not have happened without the confluence of three individuals coming together to make it happen.

When Leica CEO Dr. Andreas Kaufmann wanted to start the Leica watch project in 2012, he already had product designer Achim Heine, who had previously developed numerous designs for Leica cameras and binoculars between 1999 and 2008, on board. Kaufmann explored all possible options in terms of the foundational component of the watch, the movement, and went all over the watch industry trying to find something suitable. Some of Hanhart’s old vintage movements were considered, as were those from ETA and even Seiko. Soon a network of potential partners was built up, including Gerd-Rüdiger Lang of Chronoswiss and Reinhard Meis, a retired builder from A Lange & Söhne, with each contributing ideas that would make their way into the final watch.

In the end however, it was an encounter with Markus Lehmann, Managing Director of Lehmann Präzision GmbH, when everything came together, as it was he who made the development of an entirely new, proprietary, and Germany made movement possible.

His company, Lehmann Präzision GmbH, was a supplier of precision machinery and components for the camera industry (with Leica being a previous customer) as well as the watch industry, and he possessed the expertise to make the dream of the Leica watch come true. In fact, he had just at the time in 2011, recently launched “Lehmann”, a watch brand that had just presented a tourbillon watch. With the components for the brand’s being largely made in-house, and with the brand having already mastered the production of a tourbillon, if there was one man who could make the Leica watch happen, Markus Lehmann was it. 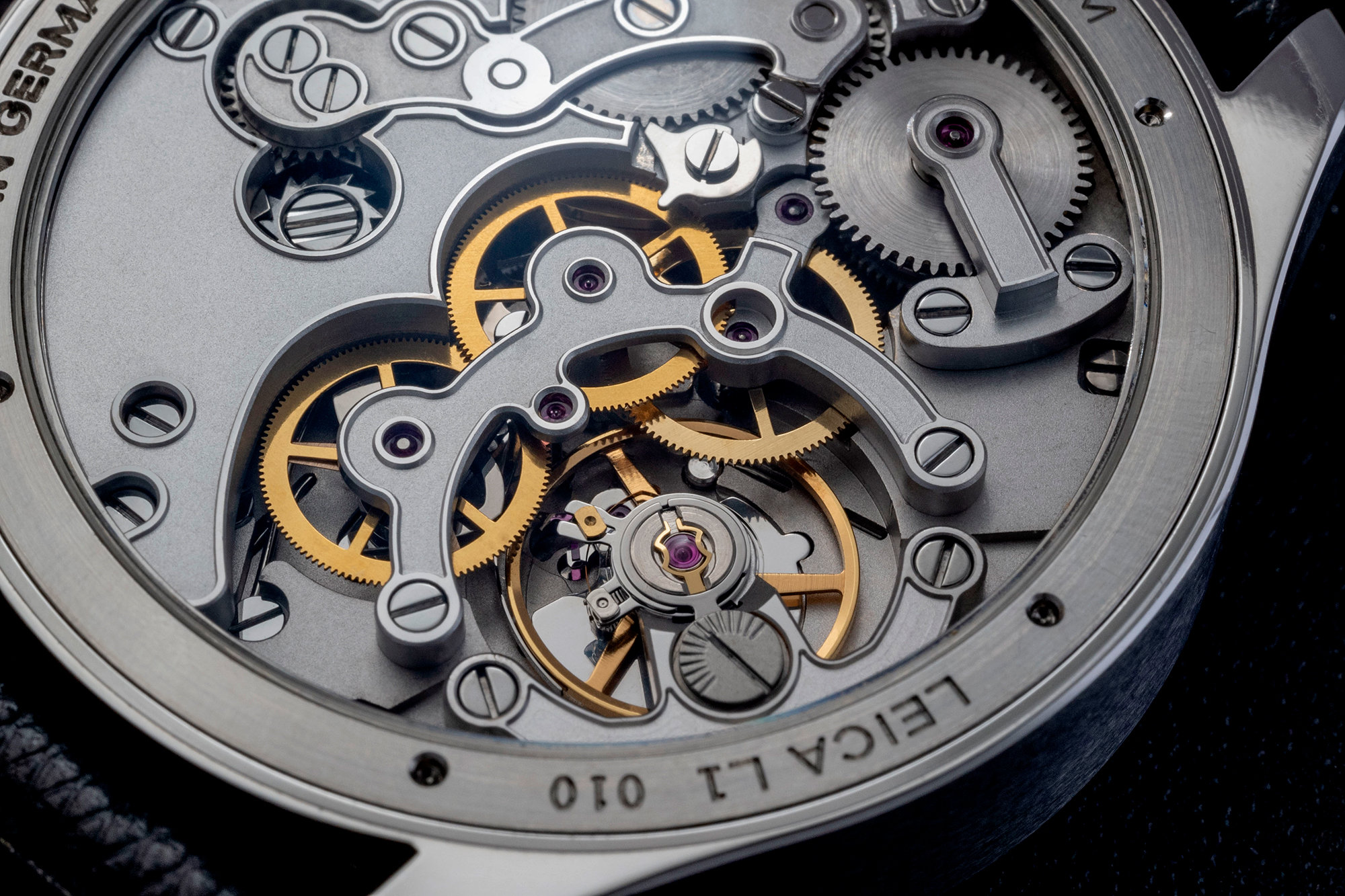 Lehmann Präzision GmbH was thus involved in the development process from the very beginning, designing, building and testing the numerous prototypes that would become the final movement. Aside from the company’s ability to manufacture, surface treat, assemble and adjust the movement, it also contributed to the idea of and design of the patented push piece crown with separate indicator in the dial that is a highlight of the Leica watches. The abilities of the company do not stop there, as they are also the makers of the case, dial and hands of the watch, allowing an unprecedented level of control over the aesthetics of the watch.

For such a watch therefore that is proudly made in Germany, I think it’s safe to say that for any hardcore horological connoisseur, what is on offer with the L1 and L2 is very convincing proposition that makes the asking price of about 9,900 Euro (US$11,460) seem entirely reasonable. Consider after-all, that Leica could have done it by any number of easier methods, but they decided instead to take the hard route, creating a nice proprietary movement that goes just that little bit further by incorporating some interesting horological functions. 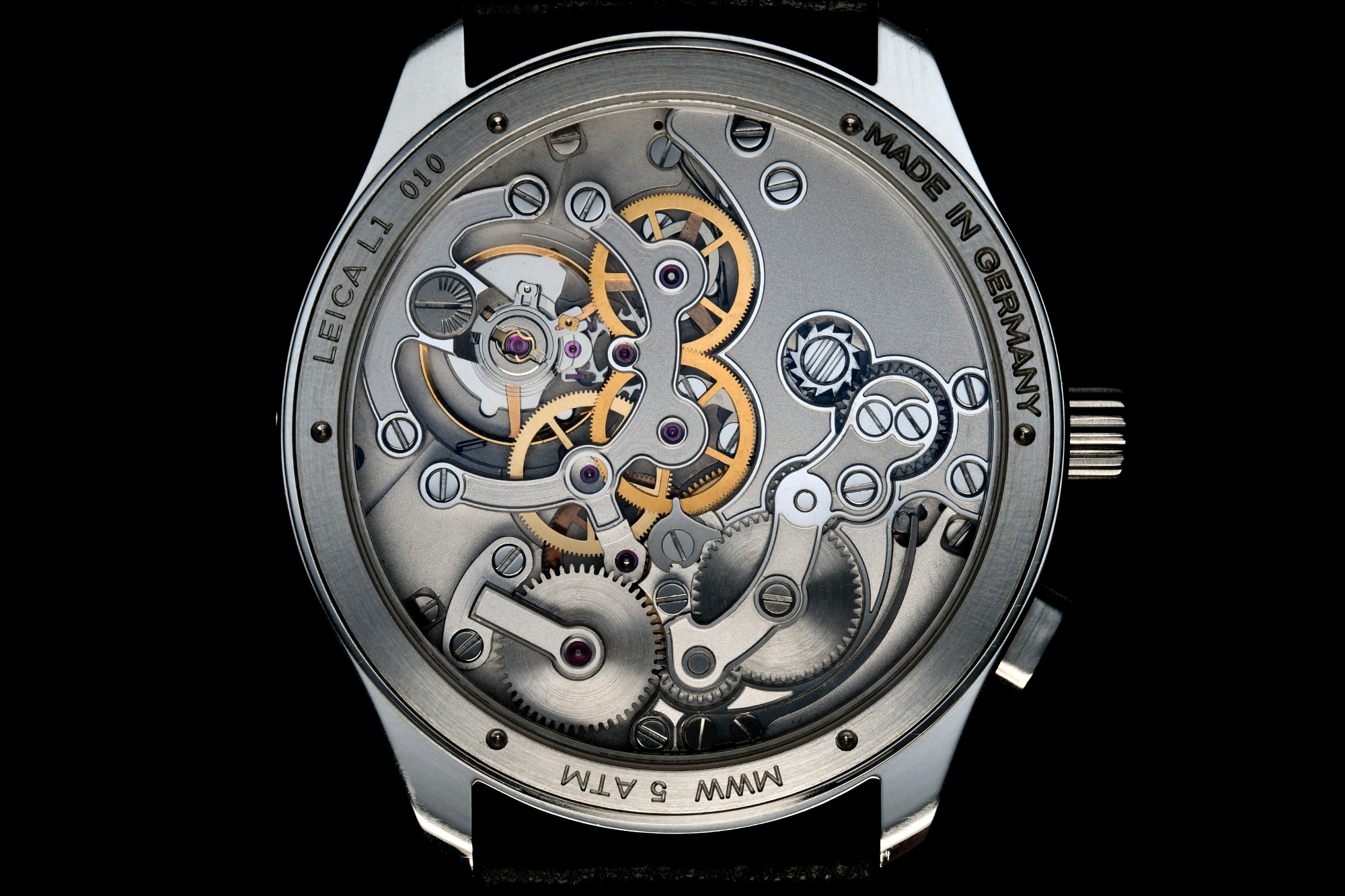 Certainly, this initial release is not a one-off exercise, as Jérôme Auzanneau, managing director of Ernst Leitz Werkstätten, a division of the company, and global director of Leica’s accessories told me, but the start of something real for Leica. The upcoming Leica L3 watch for example, will feature an alarm complication, something that photographers are on occasion apt to need – whether it’s for getting up early to capture a sunrise or for getting up generally when travelling. Essentially then the guiding principle, complication wise, is that if it makes sense for a photographer, it will be considered.

At the moment, the watch is targeted for production of about 400 pieces per year, with the allocation for the first year (starting January 2019) already spoken for with firm orders. The black dial versions of the watch are not limited but the special red dial editions (both for the L1 and L2) will be limited to a total of 50 pieces together. I was not told how the 50 piece limitation will apply across the two models, but suffice it to say, these are probably sold out at the moment. 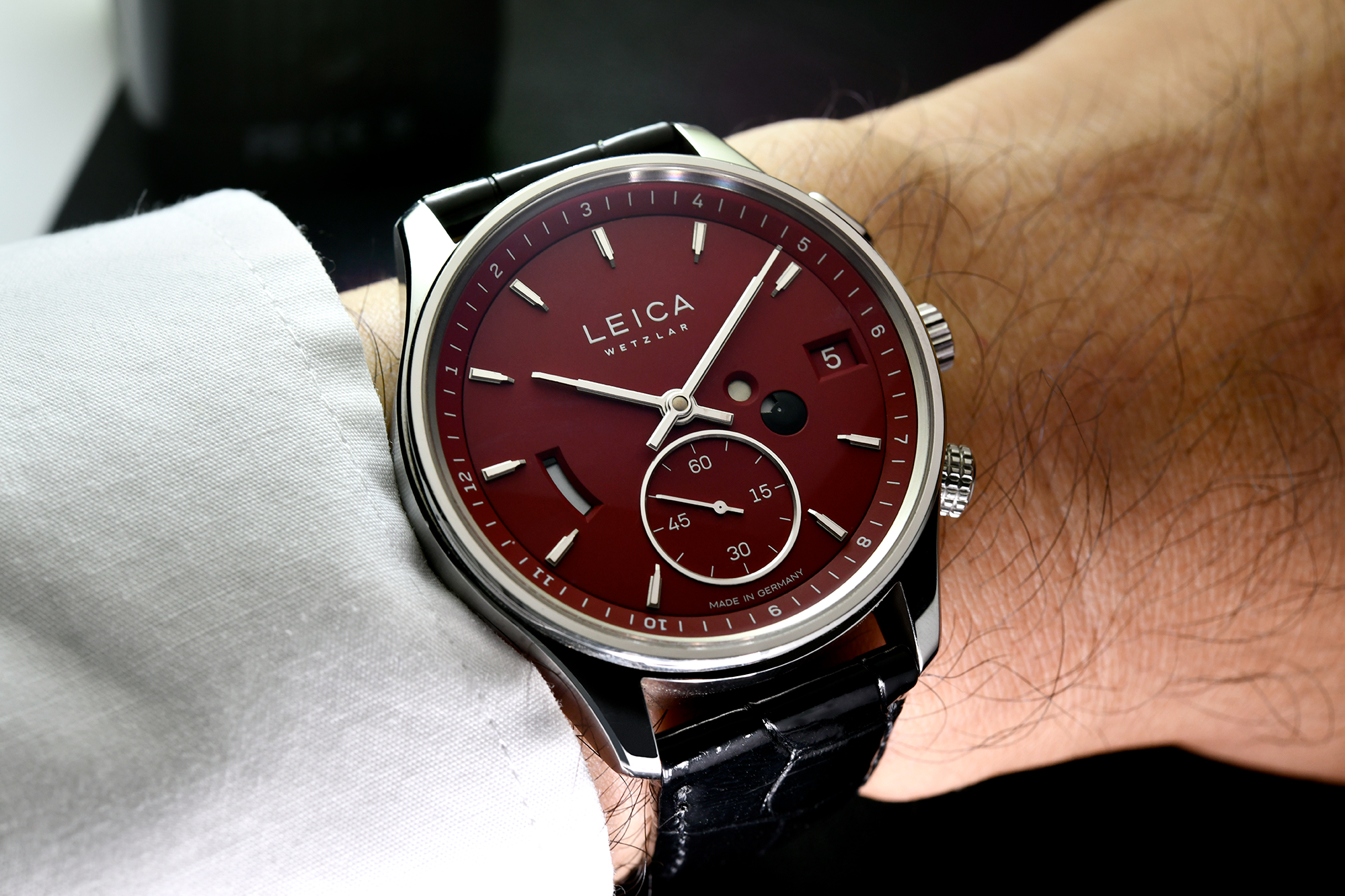 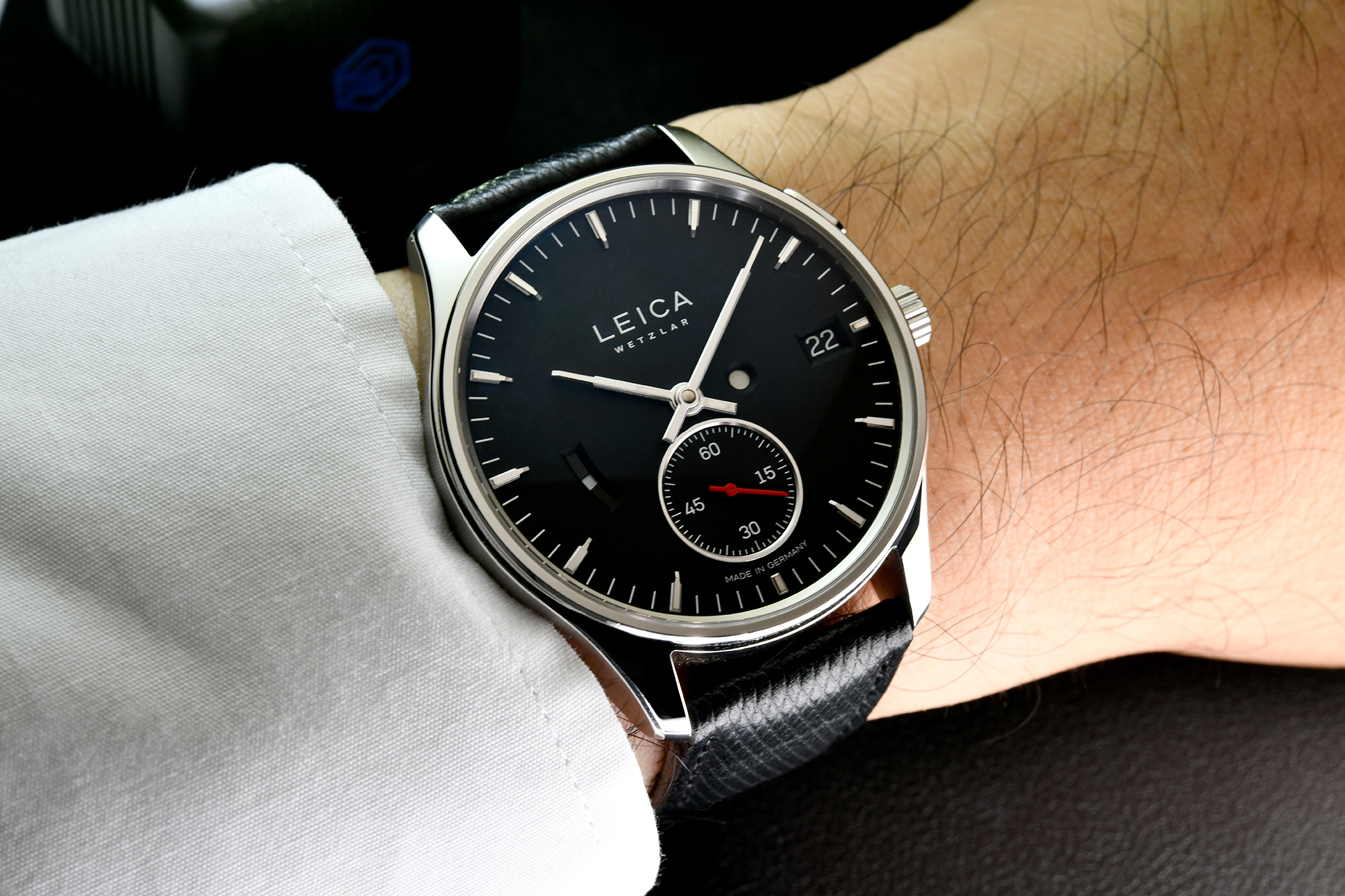 For those surprised at the high level of interest, consider one thing: those who are apt to buy this watch will certainly be both watch and/or Leica fans. With the price of a Leica M10 camera body and a standard two lens kit already touching $20,000 USD already, it’s not hard to imagine how the approximately 10,000 Euro price of the Leica watches can start to look quite reasonable. And with approximately 18,000 Leica M bodies produced a year, it’s not a stretch to imagine that there will be plenty of customers.