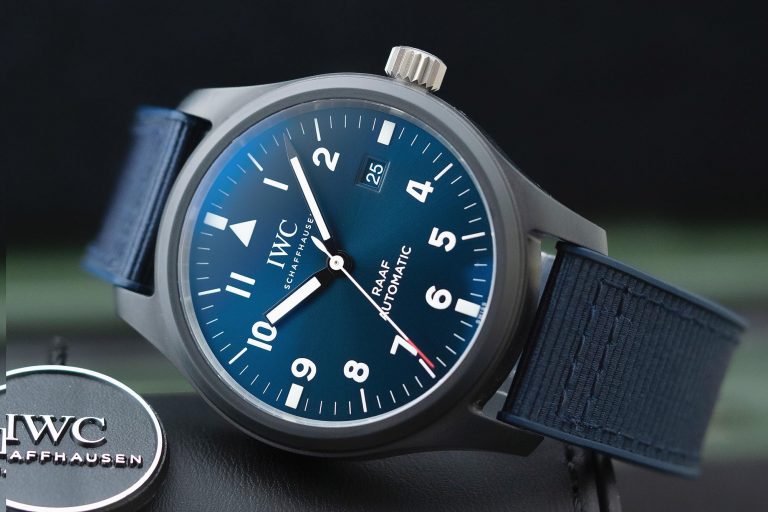 The reputations of iconic watches have been forged in the most extreme of situations, in perilous environments, and when their wearers have needed to rely on their timekeepers – arguably none more so than the Pilot’s Watches from IWC, being forged in the fires of battle. From its wartime roots in “Dirty Dozen” and the Mark XI, the Pilot’s Watch collection from IWC can trace part of its lineage to watches issued to the Commonwealth Forces, accompanying servicemen on their missions worldwide. The IWC of today honours these men and women through the IWC Military Programme – creating watches to commemorate their service, and the teams they served with. Exclusive to these service-people and their units, these pieces are not normally available to the public, and one must prove their current or former service with their armed forces unit.

Recently, the Royal Australian Air Force has been one of the branches of the military to get their own commemorative watch, in the form of the Pilot’s Watch Automatic Edition “RAAF”, and we got the opportunity to ask an owner about how the watch came to fruition, and their personal connection to the watch.

IWC has historically provided the British Royal Air Force with their timekeepers, with a tender coming from the branch in 1948. The brief was for a watch that was legible, accurate and reliable. The watch would be housed with the IWC Cal. 89 – a movement then renowned for its chronometer-like precision, and now known in modern times for its impressive finishing considering the time period, and the use case. The result of this tender was the iconic Mark XI, a watch that was produced for military use for pilots by both IWC and Jaeger-LeCoultre.

The British Mark XIs would be easily identifiable with the Broad Arrow marking (marking it as property of the Ministry of Defence), and later, the circled “T” denoting the use of Tritium as the luminescent material on the dial. IWC would then go on to supply the Royal Australian Air Force in 1957 with 600 Mark 11s, and these would be identified on the case-back with the stores reference number of G6B/346.

Perhaps the most distinctive feature of the Mark XI is the squared-off hour hand – a feature that has appeared on a small handful of models. Some of these include the regular production Mark XII, XV, and in more modern times, special editions from IWC such as the Mark XVIII Tribute to Mark XI, the Mark XVIII Edition “Hodinkee” and the Automatic 36mm Special Edition for The Rake and Revolution. If you count the pilot’s chronographs as well, we can include the reference 3706, and the ceramic reference 3705 along with the recent “Tribute to 3705”

This is a feature that only the most hardcore IWC enthusiast will notice since most of the Pilot's watches available now from the brand feature the alpha style hands derived from the 1940's B-Uhr watches used by the German Luftwaffe. This was a handset that was originally chosen for the original Mark XI as a response to complaints from British RAF pilots who wanted a highly legible handset that could be read easily in a vibrating cockpit.

It's certain true regarding the legibility in my experience, although why it is so easy to read the position of the hour hand and thus tell the time is a little difficult for me to explain. The only explanation I can think of compared to the typical alpha hands is that with the squared off hour handset, the hour hand and the minute hand are effectively different shapes, which might help to differentiate the two more easily. Not so with the B-Uhr alpha hands, as both the hour and minute hands are the same shape but differing in length. Perhaps it is more difficult to differentiate the different lengths in a violently shaking cockpit?

Certainly, because of the handset's legibility, and it's distinctiveness as part of a military oriented design that saw active duty use without change for a long time, it is the one feature that will make any student of IWC history instantly sit up and take notice for its significance especially when it appears on a new watch.

This is the reason why this new special Automatic Edition "RAAF" is so special, since with the handset it has since it not only joins a small list of IWC Pilot's watches that have it, it can also trace its lineage directly to the original Mark XI, and more specifically as well to those Mark XI watches that were issued to the Royal Australian Air Force in the 1950's.

The Pilot’s Watch Automatic Edition “RAAF” combines modern materials with cues from Mark XI watches of the past to create this edition honouring Australia’s service-people in the RAAF. The 41mm case is executed in matte black zirconium ceramic, giving the case its lightness, but also a high resistance to scratches. The blue dial is made vibrant with the use of a sunburst effect emanating from the centre of the dial - it features a date indicator at 3 o’clock, and the hour markers are designed in the typical Mark XI fashion, where a triangle replaces the 12.

The hands are also inspired by IWC Pilot's Watches of the past - the tip of the hour hand is squared off, contrasting with the minute hand which forms a point, along with a white seconds hand with a red tip. A very subtle marking on the dial denotes this as a model for service-people, with “RAAF” being pad printed above the words “Automatic” at 6 o’clock. The watch is delivered on a blue IWC textile strap that undoubtedly gives great comfort on the wrist.

Turning the watch over, the solid titanium caseback is emblazoned with the Royal Australian Air Force roundel -  a kangaroo in motion. This is also where each watch is personalised with the owner’s name, callsign or nickname. Behind the caseback, powering the watch is the in-house IWC 32111, equipped with 72 hours of power reserve, and the Pellaton winding system for efficient winding on the wrist.

Obviously, none of us at ISOCHRONO are current or former members of the RAAF to be able to get our hands on this watch (Martin comes close by virtue of being Australian, but that’s about where the similarities end), however, we managed to track down someone who is. Tom (@time.poor) is a currently serving member of the RAAF and we asked him a few questions about his role in the service, and what the watch means to him.

What is your involvement with the RAAF?

What does the watch mean to you and your service?

As a watch enthusiast, I’ve always flown wearing a pilot’s watch, IWC being my personal preference as the epitome of military aviation. When the opportunity arose to get a personal, limited edition IWC with my own details engraved on the caseback, I jumped at the chance.

What do you like best about your new watch?

The ceramic matte black case contrasting with the blue sunburst dial is my favourite feature, closely followed by the blunt hour hand which is a throwback to the IWC Mark XI that was issued to RAAF Pilots in the late 50s and 60s. In my opinion, the IWC cannot be beat in terms of legibility, especially in low light. The simple design, shape and feel is second to none. The history and nostalgia having supplied military pilots for decades also really appealed to me - it’s an accolade that means a lot to me.

How did the collaboration come about, and how did you find out about it?

An RAAF pilot has been working with IWC over the last couple of years to get this watch designed, developed and marketed.

IWC’s Military Programme has produced some exceptional commemorative watches for the men and women who serve. This new RAAF edition carries on the history that IWC has with Australia, and will no doubt be a reason as to why the Pilot’s Watch collection will remain a firm favourite of the Australian market for years to come. Combining modern construction and vintage details honours those past and present, and we cannot wait to see who IWC will honour in the future with watches from the Military Programme.

Thanks to Thomas Inslay (@time.poor) for the photos in this article.