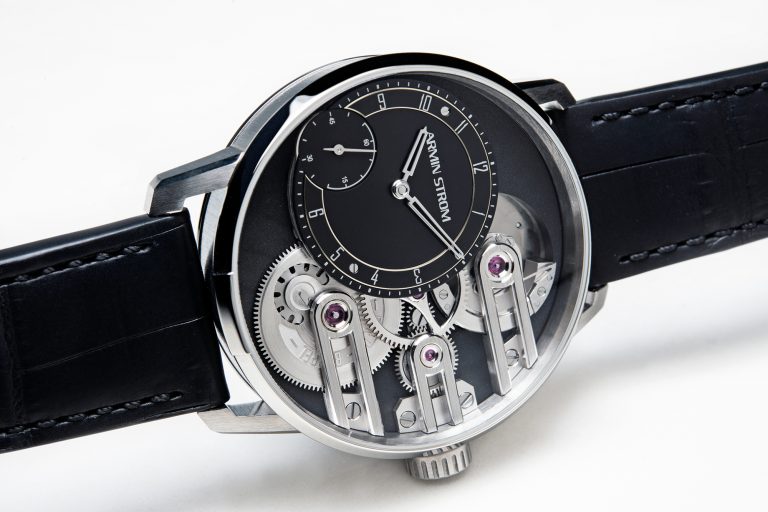 When Armin Strom announced the launch of a new watch at Dubai Watch Week recently, I assumed that it would be another Resonance based watch.

On seeing the picture of the new Gravity Equal Force however, I realised that I was wrong, since it most obviously does not have the brand’s proprietary Clutch Spring. Instead, the Gravity Equal Force is a watch of a brand new design, in a brand new collection called “System 78” and it comes in a surprisingly accessible price point of under 20,000 CHF, and does so by offering a unique complication that is elegantly done. 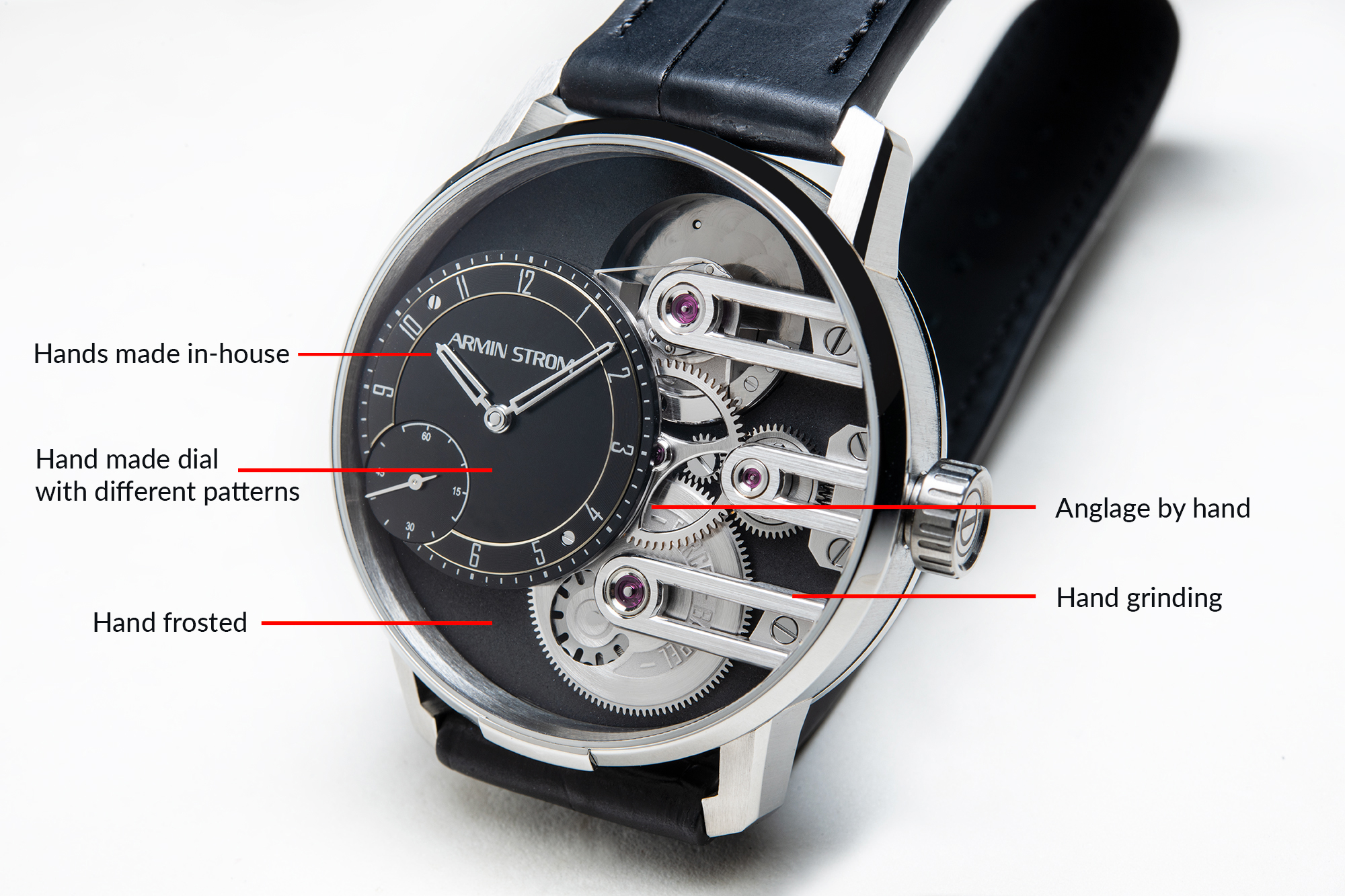 The Gravity Equal Force comes with the design language derived from the very successful Resonance based watches that have occupied the brand for the last 5 years of so. In a round case, there is an off-centred to the left, sub-dial displaying hours and minutes, with the remainder of the dial space dedicated to showcasing the complications of the watch. Connected to the three horizontally mounted bridges – which going forward will be a design signature of the System 78 collection – from top to bottom, there is the micro rotor (for automatic winding), then the gear train and finally the mainspring barrel, which houses the complication that gives the watch its name. 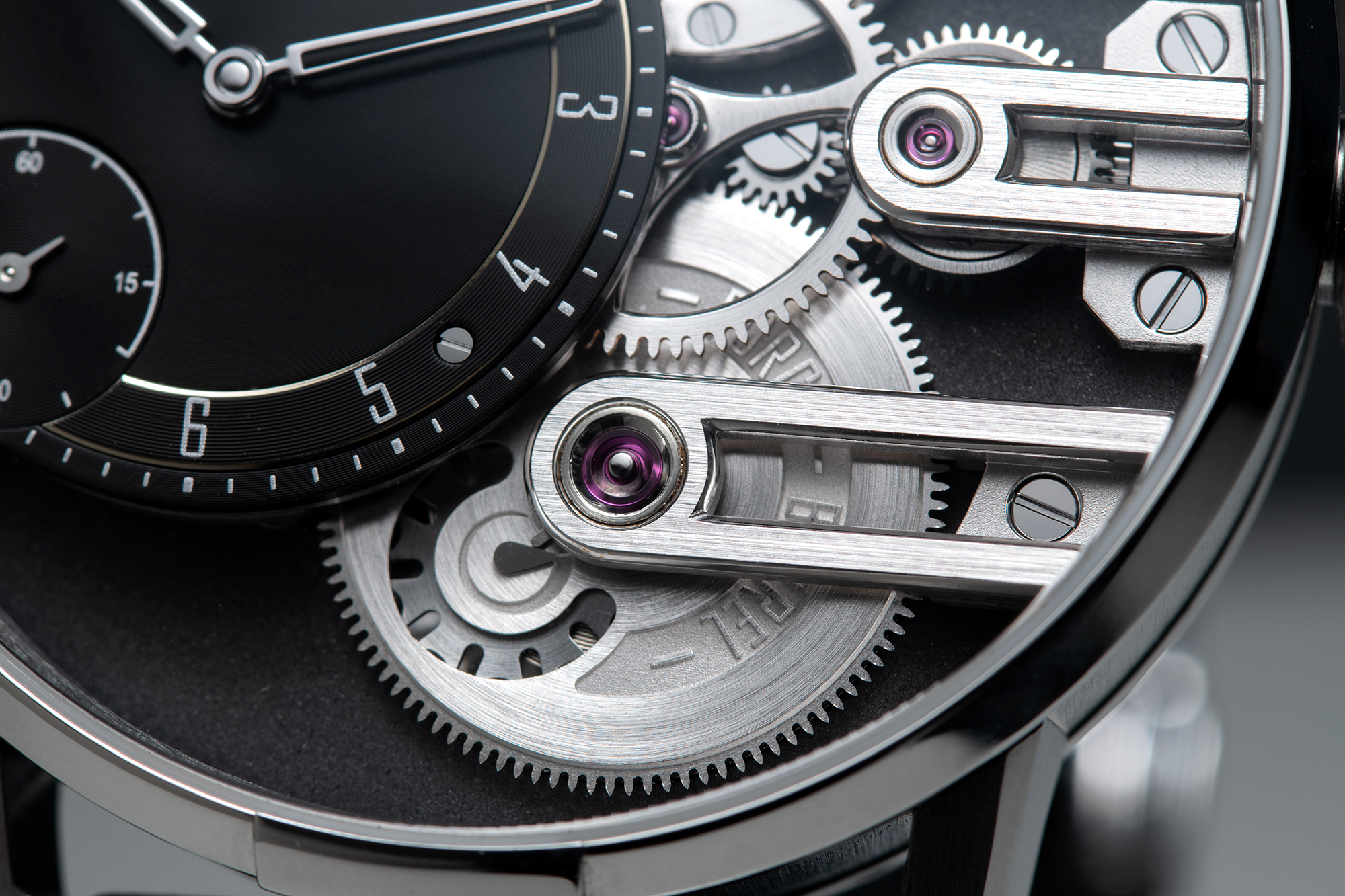 Where the design differences come in relation to the Resonance watches however is in the redesigned case, which features not just a thinner bezel, and an overall more sleek and modern appearance, but a redesigned lip at the 6 o’clock position of the bezel, which has traditionally been larger to allow a personalised engraving. It is much smaller now and in many ways, almost invisible, all to match the overall feel of the case and to recall a design signature that has always been there from the start with the brand. At a case width of 41 mm and a height of 12.65 mm, it is a comfortable size that sits well since it is not too big, but not too small either, so that the main visual highlights of the watch don’t feel crammed.

The dial of course contains the main highlights and is also suitably finished, with much of the decoration applied by hand including the anglage, frosted movement plate, hand ground bridges, and dials. Even the hour, minute and seconds hands, incidentally skeletonized now, are made in-house. 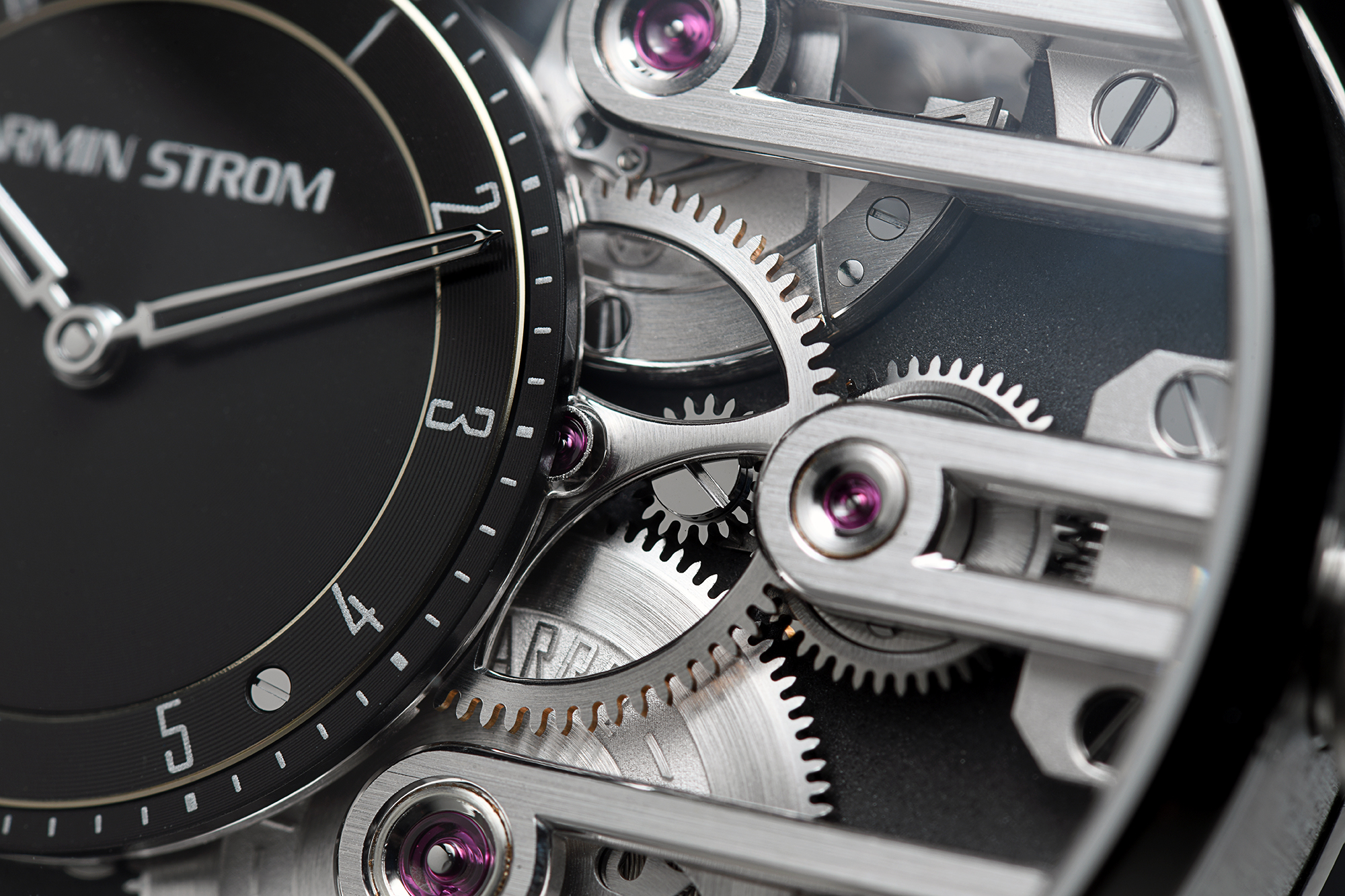 Other interesting design features include the lugs that run in a little before meeting the strap, in the way that the Hermès Arceau watches do. This little touch, in combination with a sans serif Arabic numerals (instead of Romans for the Resonance watches), gives the watch overall, a refreshed and modern feel. 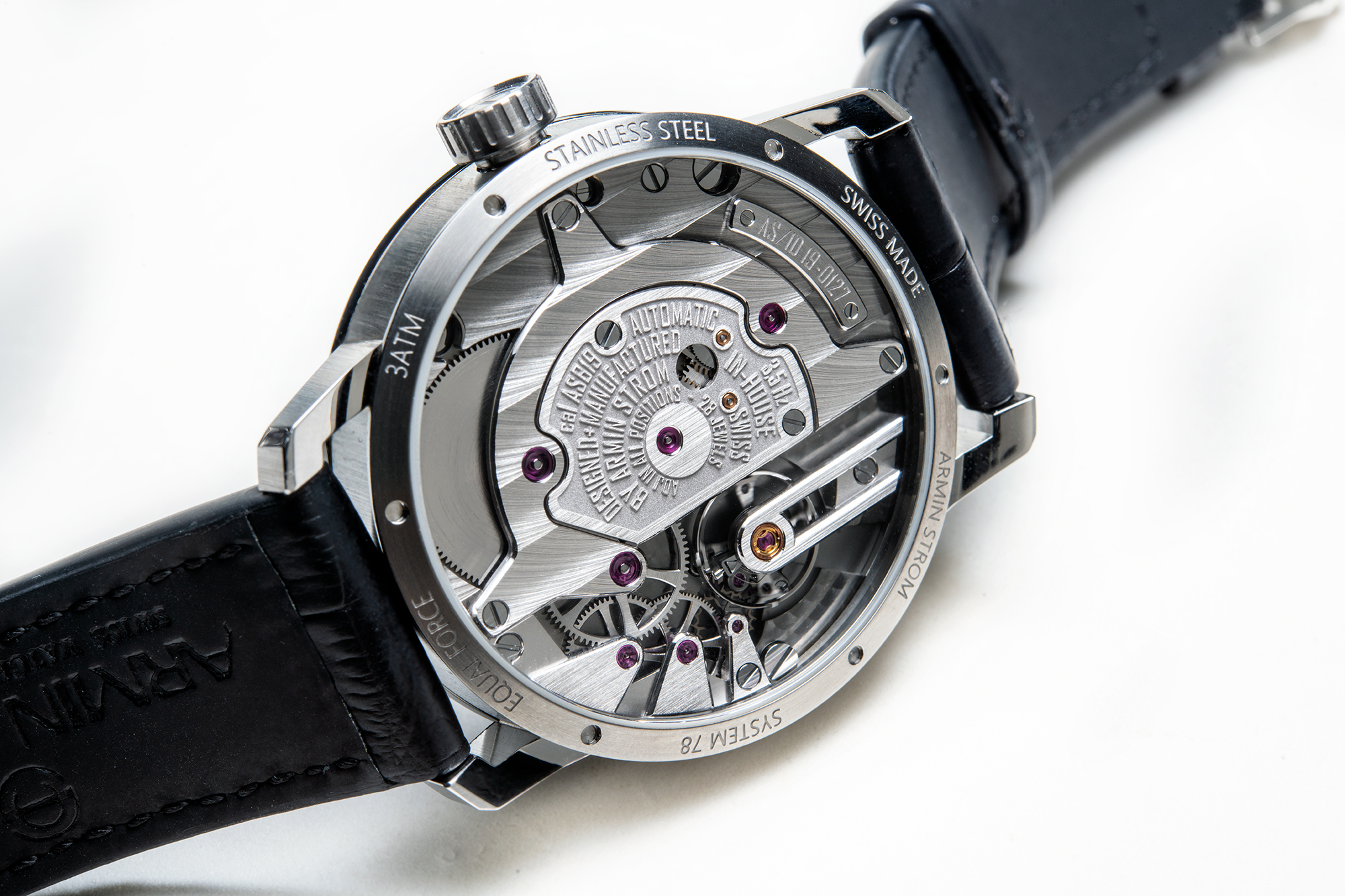 Round the back, there is quite a large amount of visual interest as well, with the balance wheel visible as well as some parts of the gear train. The view is dominated however by the movement plate cover, which is decorated with wide Geneva stripes that have a beautiful organic like texture in between them. The texture looks like wood, or even snow drifts. Whatever it was inspired from, it does give a lush quality to the rear aesthetic of the watch. 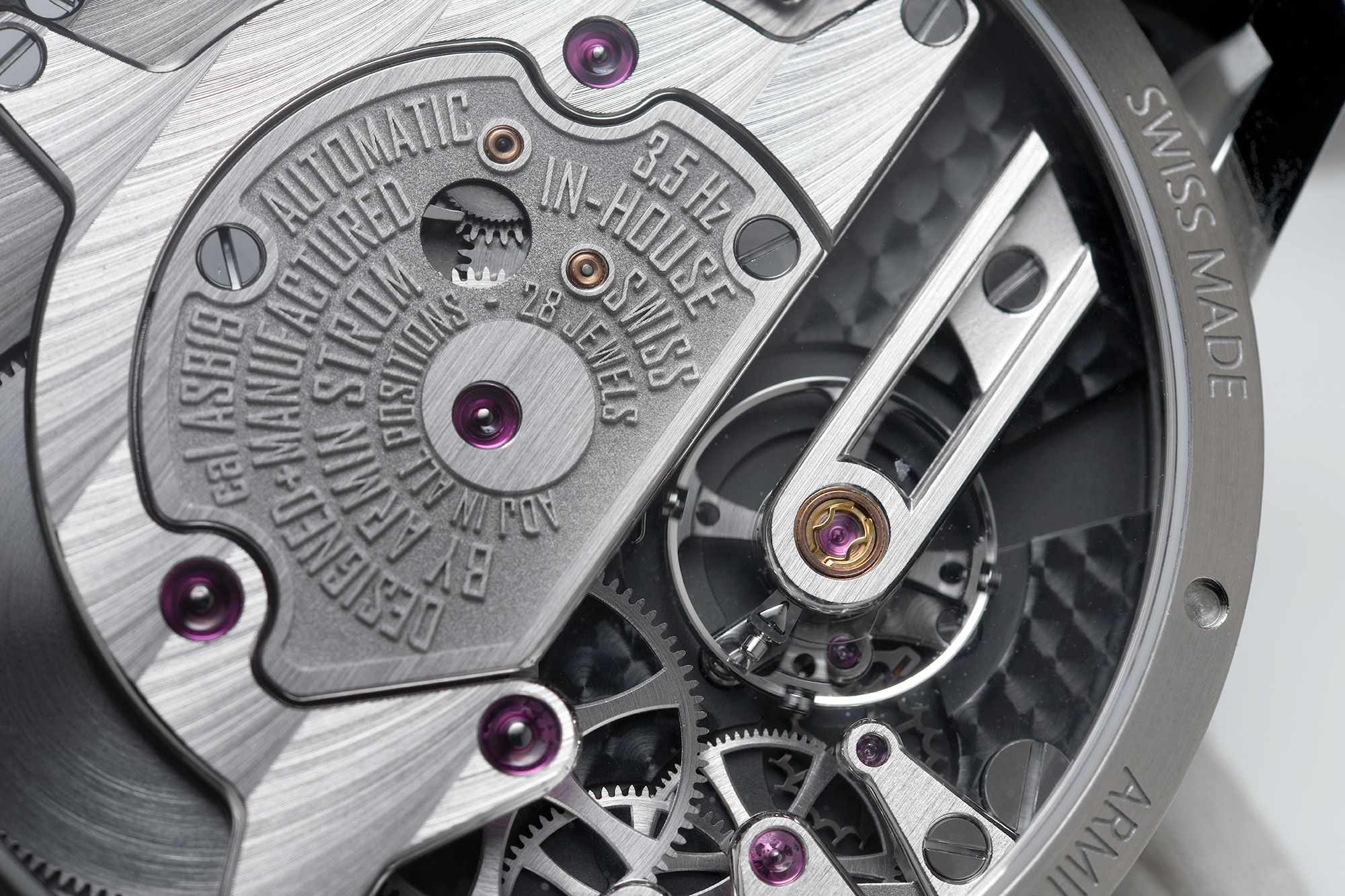 What is Equal Force?

The main thing that the Armin Strom Gravity Equal Force tries to achieve in its complication is to deliver constant torque to the balance spring. How it does this is by using a mainspring capable of four days of power reserve, but stopping the watch from unwinding totally by the third day. What this essentially does is to allow the watch to deliver power to the mainspring in the optimum part of its torque curve.

As the stop work de-clutch mechanism steps in to stop the watch after 72 hours, it behaves essentially like other types of constant force mechanisms like the remontoire and the chain and fusée. In combination with the four day capable mainspring stopped after three days by the stop work mechanism, the same result is achieved but in a simple, smarter and more elegant way. How cool is that?

When you can get the same theoretical benefit of better chronometric accuracy in a simpler way, that is genius level thinking at play here. Less complexity means better reliability and a better price. 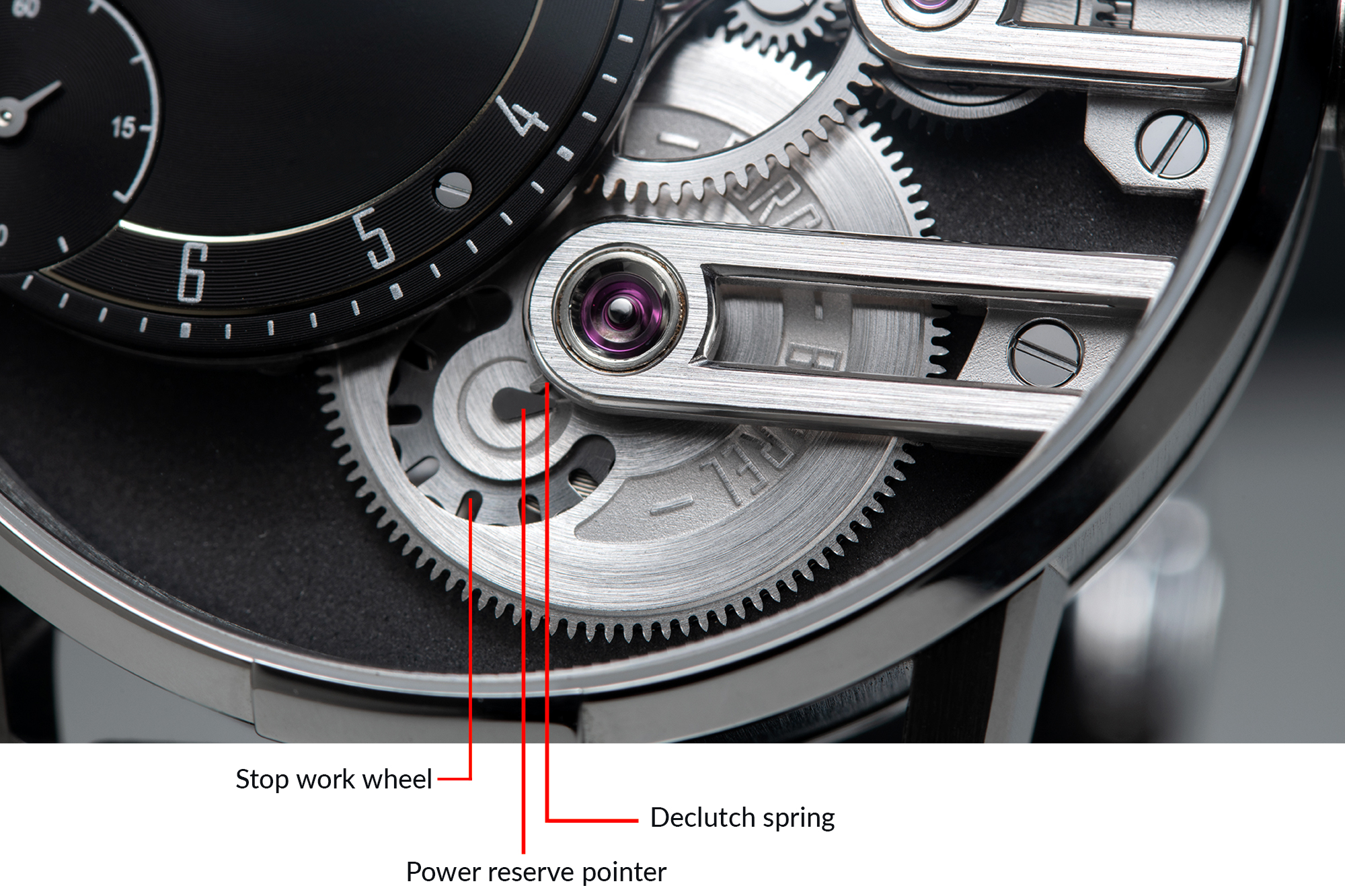 In practice of course, since this is an automatic watch, it will maintain power when you’re wearing it. However when unworn over the weekend, it will by Monday still maintain its constant torque which is great. A 3-day power reserve is nothing to sniff at no matter what.

Supporting the stop-work mechanism is a new mainspring barrel, inspired by a vintage pocket-watch that was brought into Armin Strom for repair. It had a motor barrel, whose barrel and winding mechanism is opposite to that of a standard going barrel. Instead of the arbour being fixed and the barrel housing moving to drive the gear train, with the motor barrel, it is the barrel housing that remains fixed while the arbour transmits the power. This method reduces the amount of friction that happens as the mainspring unwinds, since the arbour rotates around a precision jewel bearing and has less surfaces area for friction to occur.

System 78 and the new direction of Armin Strom

The Armin Strom Gravity Equal Force represents in my view, welcome news for watch enthusiasts. It is the first model that is part of the “System 78” collection, so named because 1978 is the birth year of Claude Greisler and Serge Michel, the founders of the “modern” Armin Strom after the namesake founder sold the brand. The aim of this new collection is to keep to a price point of below 20,000 CHF for the stainless steel variations, and that are interesting from a complication perspective, that are also good looking and have superb finishing. 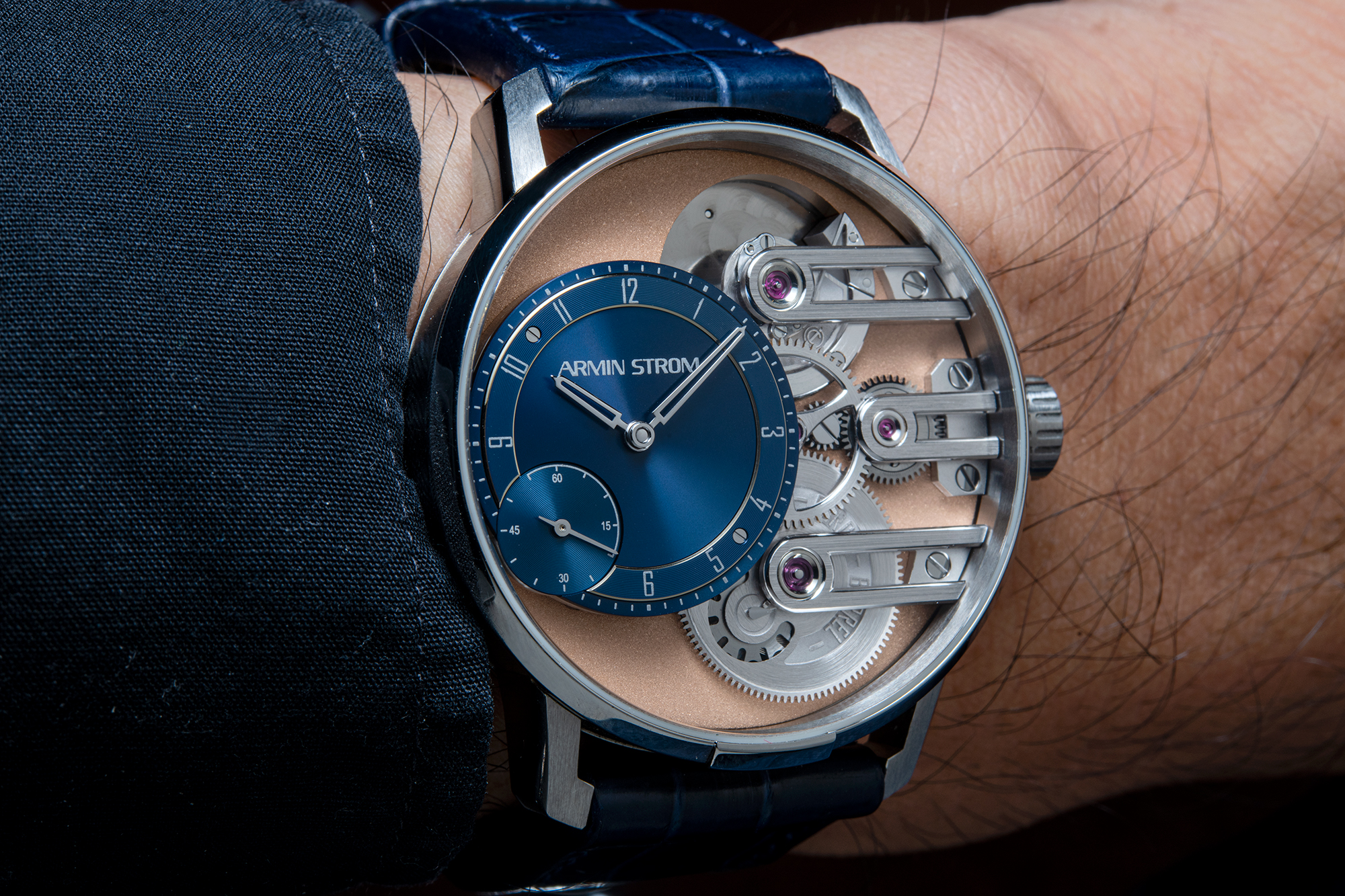 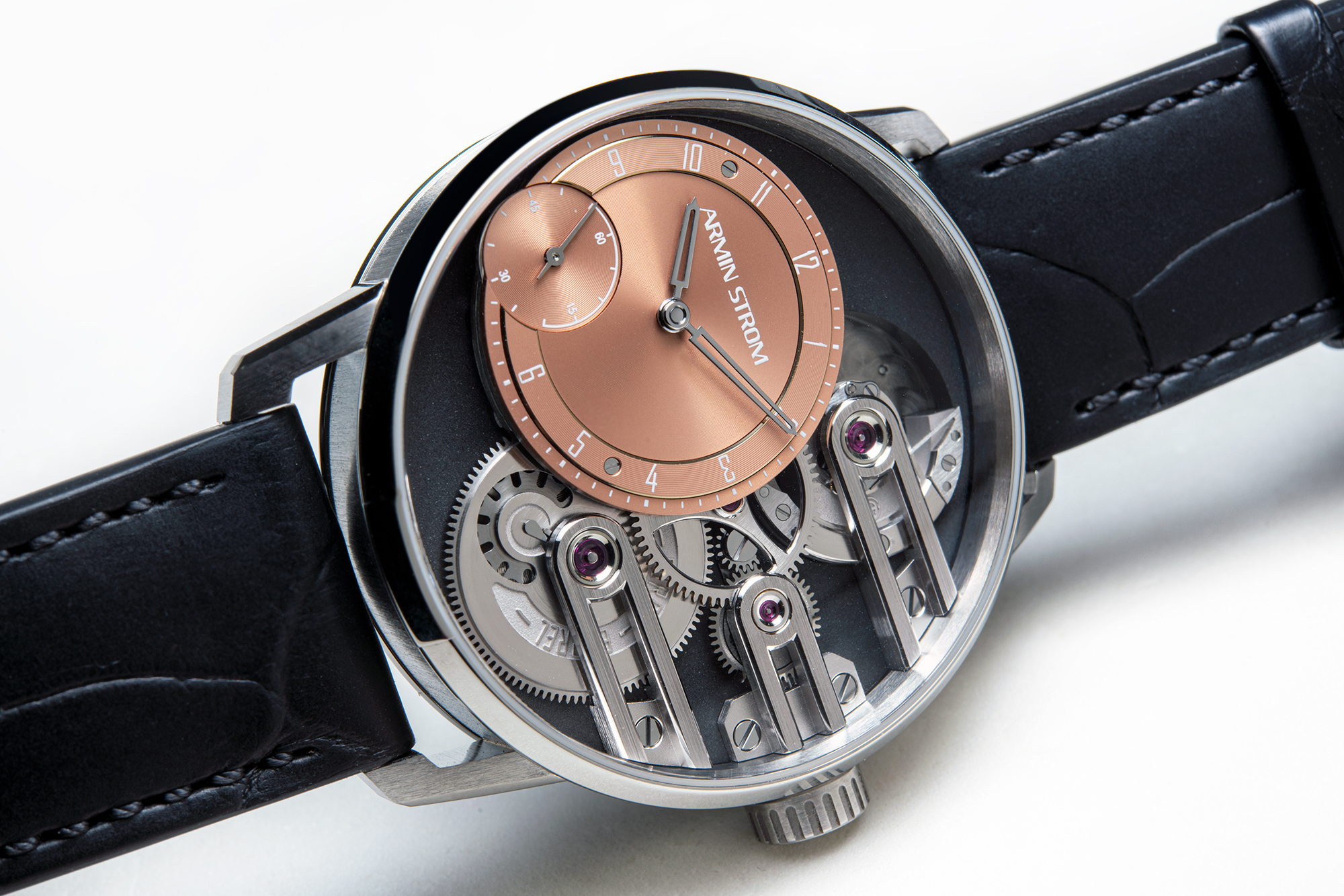 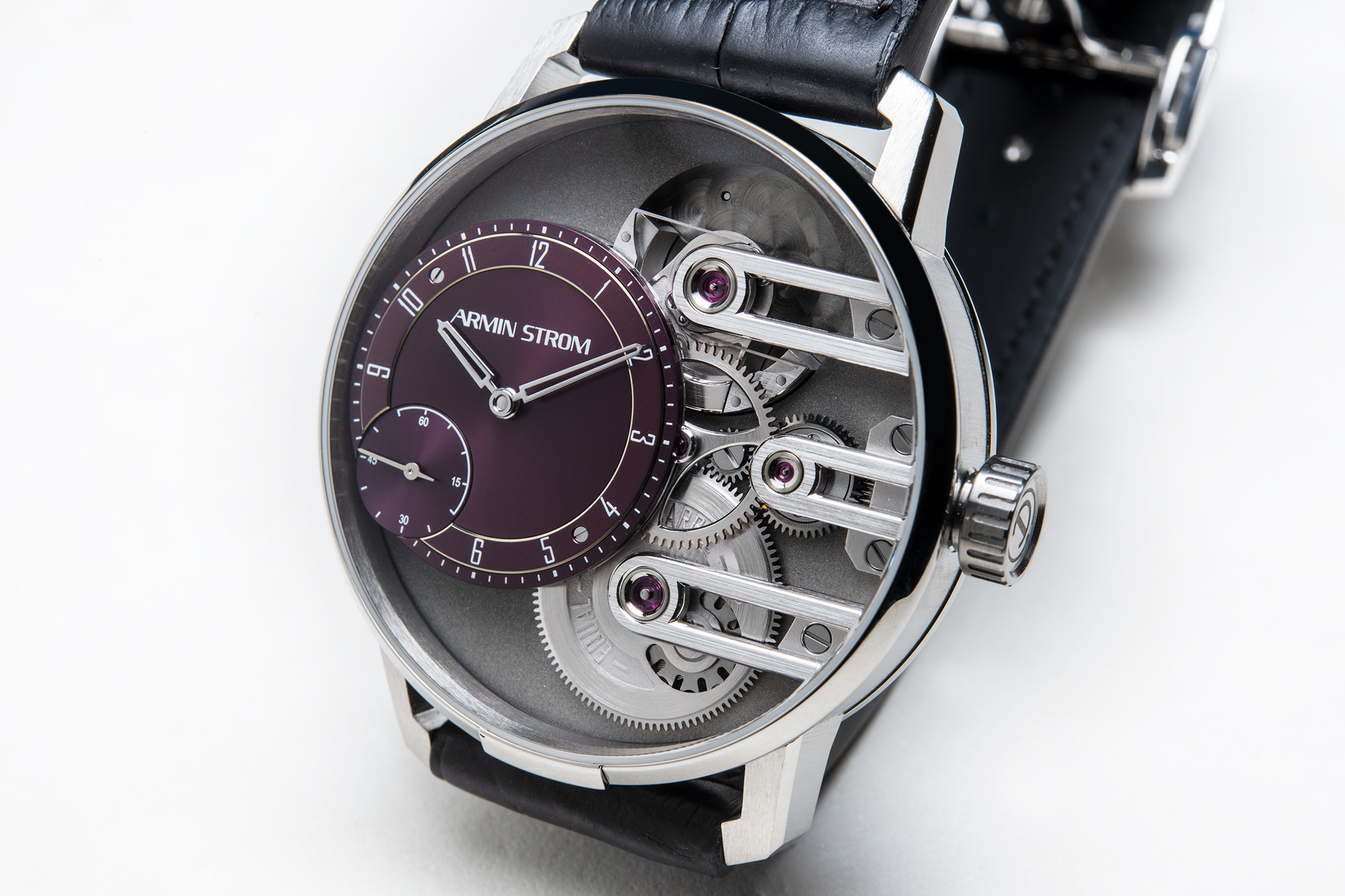 The Gravity Equal Force achieves these aims well, and at 16,900 CHF, there is a tremendous amount of value on offer.

If this watch represents more of what will come from the new System 78 collection, then I think it will be worth looking forward to other releases in the future. I am told that in the pipeline, there will be a new watch with a date function – albeit done in a cool way (no apertures), and also a nice manual winder. While these tidbits of information probably only scratch the surface, they are certainly useful pointers to maybe, some fantastic watches in the new collection.

As for the Gravity Equal Force – there are very few watches that pique my interest, given how many I see in the watch industry as part of what I do, but this one is different. It is good looking and horologically interesting, and most of all, it comes with a price, that for me at least, is within the realm of possibility and reason. I find it hard, therefore, not to add it to my wish-list of potential watches to acquire. If anything, that’s as good an endorsement as any!