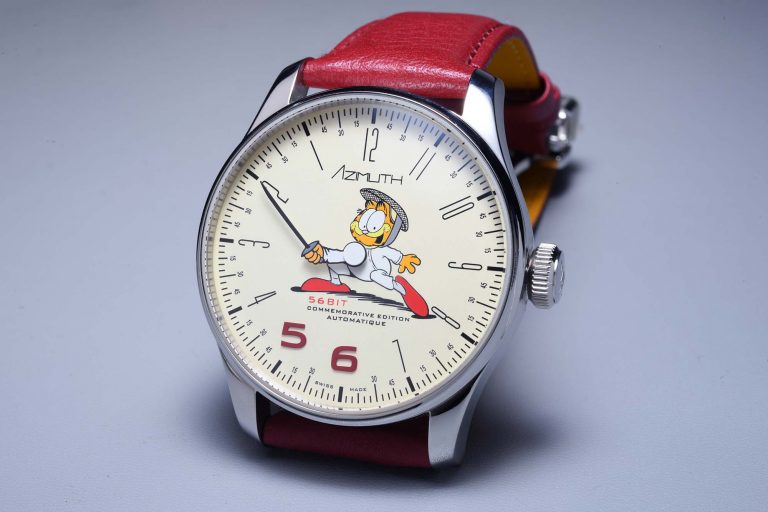 Azimuth Back In Time – Singapore BIT 56 Commemorative Edition – with Garfield.

Azimuth, the brand with a penchant for making cartoon character themed watches, comes at us again with a new offering, this time featuring Garfield on the dial of the “Singapore BIT 56 Commemorative Edition”.

For those not in the know, “BIT” stands for “Back In Time” and is a complication that is a signature staple of Azimuth, where the hands of the watch go counter clockwise. How do you tell the time? Check out this simple graphic below.

Of course there are plenty of interesting technical and philosophical aspects to a complication like this, which I’m sure you’re burning to find out more about. For that check out my comprehensive article on the Back In Time complication linked below.

Now given that the hour markets on the dial are printed “backwards” (counter clockwise) from normal (clockwise), it does allow some interesting things to be done, and also explains why the “Singapore BIT 56 Commemorative Edition” has the word “Singapore” in it.

Well, it turns out that the watch extends upon an idea from a previous Azimuth BIT watch – the “Singapore Commemorative Edition 1965-2010” where the “4” and “5” Arabic numerals on the dial are highlighted to make them look like “45” or the anniversary of the country the year (2010) it was released.

In the “Singapore BIT 56 Commemorative Edition”, the “5” and the “6” for the numerals are highlighted, and this time it is for the 56th anniversary of Singapore, which was last year in 2021.

Why is Garfield fencing then? Well, according to Azimuth, it’s because they feel that their watchmaking ethos resonates with the character of Garfield, with a strong independent attitude laced with a ton of swagger. I get that. Haven’t we seen Garfield in the comic strips doing whatever the hell he wants? What about fencing then? Well, that’s not exactly a very common preoccupation, and I like that combination of fencing being extremely technical and precise, yet is also a martial art that can attack or defend – nice.

Well, whatever the reason Garfield is on the dial, the watch overall is executed very well. First of all, using a fencing sabre allows the single time pointing hand to be very thin, which makes the 5 minute resolution of the watch easier to make out from a time telling perspective. Then there is the thinness of the hand making it seem very sharp, which does make it possible in your imagination to hear the swishing motion of the sword when you see it moving over time.

Curiously, Garfield wears some kind of metal hat instead of a fencing mask, which is understandable because one never hides the face of your expensive celebrity. Added to this is a white fencing suit and red shoes that match the tone of the “56” numerals – all apt and in line with Singapore’s national colours, which are white and red are Singapore’s colours.

The choice of the light yellow background though, that seems to have the texture of paper is a little uncommon, but strangely, it does work. That texture as well, contrasts nicely against the Garfield figure, which is glossy throughout.

Now who will this watch appeal to? Garfield lovers definitely, some proud Singaporeans and those who want to see the BIT complication telling the time with the hand(s) of a cartoon character – which is an Azimuth first. I know what you’re thinking, but the “AZIMUTH X GO ASTRO BOY GO!” doesn’t count since the hands go clockwise normally.

Sized at 42mm width and at 14.5mm thick inclusive of the dome crystal, this is a relatively large watch with a large presence. It comes on a padded red leather strap with orange underside (like Garfield) and features a commemorative engraving of Garfield on the solid case-back with the edition number, out of – what else? – 56 pieces total.

Coming in at SGD3200 it is available, if you’re in Singapore at authorised dealers Red Army Watches or WOW2, or from Azimuth (chrislong@azimuthwatch.com) directly, if you are outside Singapore.