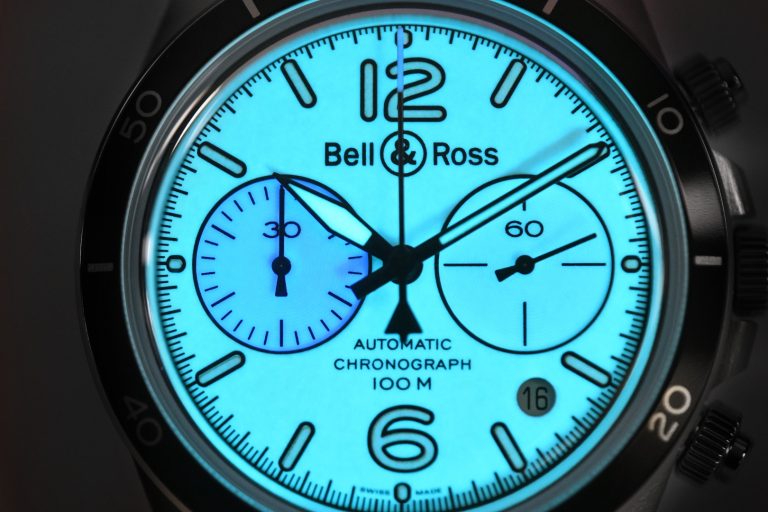 Bell & Ross has been doing some interesting things with lume since they launched the LUM line in 2017, and I’m glad that they’ve been committed to exploring the possibilities of making their watches look like miniature parties in the dark.

The last Bell & Ross I enjoyed was the BR 03-92 Diver FULL LUM diver, that I tried on with a strap from the BR 03-92 FULL LUM (non-diver), which was very awesome, and certainly the type of combination that would be great to wear in a club.

Like the other FULL LUM watches, this one also has, instead of luminescent material on just the indices and hands, a fully photoluminescent dial coated in Super-LumiNova.

It’s a little different though with this watch, because of the combination of three different Super-LumiNova® colours: pale green (C5) for the most of the dial, pale yellow (C3) for the Arabic numerals and hour indices, and blue (C3) for the 30 minute chronograph counter.

By daylight, while both sub-dials appear white against a background in light green, in the dark their colours appear different, with the blue of the 30 minute chronograph counter in contrast with everything else around it. It’s a nice touch since this is a chronograph watch after all, and the fact that it is highlighted does go with the core complication of the watch. Not only that, it allows the elapsed minutes to be more easily distinguished in the dark, if you are actually going to be using the chronograph under these conditions.

To further help your activities in the dark, the tip of the chronograph seconds hand is also coated in blue Super-LumiNova, further tying all the hands parts of the watch, with the same related functions together.

The rest of the watch will be familiar to those already familiar with the BR V2-94. It is a 100 metre water resistant chronograph with screw down chronograph pushers carrying the calibre BR-CAL.301 Automatic movement in a 41mm case. Additionally it comes in a black rubber strap that will enable you to swim without worry.

One thing I want to note with these pictures is that the part of the dial that is supposed to look green, looks a little blue instead. I believe that it might have to do with the sensor of my camera, or perhaps that the exposure timing might have caused the colours to shift a little. Doesn’t matter though, this is a watch that will be very enjoyable to wear in the dark, and you can use it to time nocturnal activities that take no more than 30 minutes.