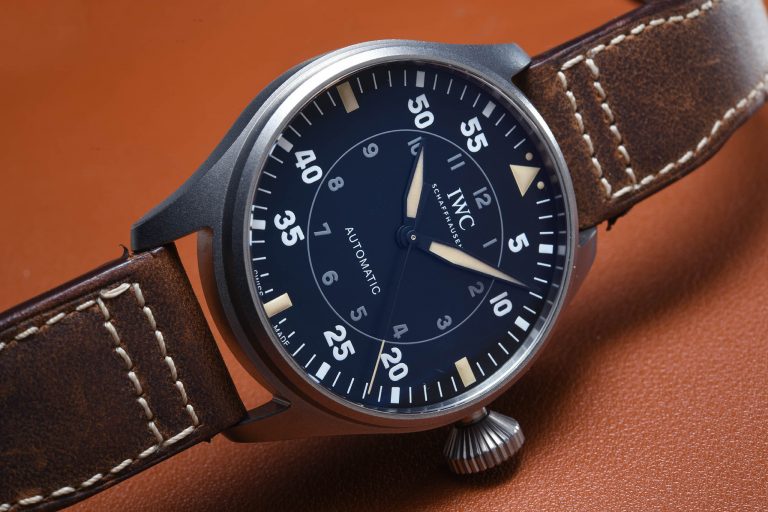 Hands on with the IWC Big Pilot Spitfire 43

This year’s big news from IWC was a Big Pilot model in a more wearable 43mm size that was launched in the earlier part of 2021.

It would of course be only a matter of time that more variations would be announced, and two new ones have come in December for the Spitfire collection. The first is this version in bronze with a green dial (right), and the second, a version in titanium with a unique, enthusiast oriented dial (left).

Now, I was a little bit taken aback when I first started to see pictures of this new Big Pilot Spitfire 43 online, because I thought it was an old model that I had somehow missed. The reason? This was a Big Pilot with a Type B dial, which in my memory, had never existed before. I was soon to find out that this was indeed a new version of the Big Pilot 43, and when that happened I was instantly excited.

I mentioned before that this was an enthusiast oriented model so let me explain. Any well schooled fan of the history of horology and IWC will know that the brand’s Big Pilot line traces its roots to the 1940’s “B-Uhr” watches (shortened from “Beobachtungs-uhren”, or German for “Observation watches”.) These were important tools for navigation while flying, and were made by five watch companies, A. Lange & Söhne, Wempe, Lacher & Company/Durowe (Laco), and Walter Storz (Stowa), in accordance with strict specifications imposed by the German Luftwaffe or airforce.

The “B-Uhr” was introduced with a Type A dial at first, with the hours in Arabic numerals around the dial, with the 12 o’clock position occupied by a triangle for dial orientation, a design that the current Big Pilot’s watches are based on. Very quickly however in 1941, the B-Uhr watches transitioned to the Type B dial, this time with the minute Arabic numerals in 5 minute increments taking the place of the hour Arabic numerals, with the latter being moved into a smaller concentric circle into the middle of the dial.

It’s easy to know why when you think about the job that these watches were doing. Because they were used for navigation, it was the smaller units of time measurement that were more important to a navigator. With the large central seconds hand that was hackable already a prominent feature, the next important piece of information for a navigator was the minutes. By placing the minutes in five minute increments prominently around the dial, there was less possibility for error in reading the time, in a dark, cold and vibrating cockpit.

This is probably the reason why the hour Arabic numerals and its concentric circle in the Big Pilot 43 Spitfire are rendered in grey, since it is lower priority in the information hierarchy for a navigator.

This is the reason why this new Big Pilot 43 Spitfire is so significant. It’s the first time that a Type B dial has been introduced by IWC in modern times, and maybe ever, since I have not been able to find an example of a 1940’s IWC made B-Uhr with a Type B dial – (Please correct me if I am wrong.).

It was a genius move to make this watch with the Type B dial within the platform of the Big Pilot 43 collection because it has a very unique attribute – no date complication. This allows the Big Pilot 43 Spitfire to retain the clean proper look of the dial because a date window would be difficult to place properly without disrupting the design.

The orienting triangle at the 12 o’clock position is slightly different compared to that in the 1940’s Type B watch since it is placed lower than the one in this Big Pilot Spitfire 43. I personally prefer the implementation of this, as it is done in the same way as implemented in the 2017 “Mark XVIII Tribute to Mark XI”. Placing this triangle at the edge of the dial out balances out the four cardinal points on the dial, which like the “Tribute to Mark XI”, has a cream colour that is meant to recall aged tritium. This of course necessitates the removal of the 15, 30 and 45 minute Arabic numerals, which on balance works well.

Another nice feature is that the watch comes in a titanium case, which not only allows the watch to be very light on the wrist, but also allows the case to have a greyish tone, which in combination with the matte textured surface, looks very much like the vintage B-Uhr watches, which were military tools that were created with no ornamentation.

Rounding off the package is a brown calfskin strap (lug width 21mm) that looks the vintage part, yet with the modern convenience of a deployant clasp and the new EasX-CHANGE system.

Overall, this is a very well put together and compelling package for the horological enthusiast who will be able to recognize the significance of the aesthetic features that it has. I, for one, was not disappointed when I was able to see this watch in person since it seems to be done right in almost every way, passing even the on the wrist test given its sweet spot proportions and lightness.

In fact, it might just be the purest expression of the original 1940’s B-Uhr , much more so – dare I say it – than the venerable Big Pilot watch at 46mm, which to be fair, should be considered an evolution of the original with its power reserve, and small seconds sub-dial and date window. Either way, it’s a choice that you now can make, which can only be a good thing.