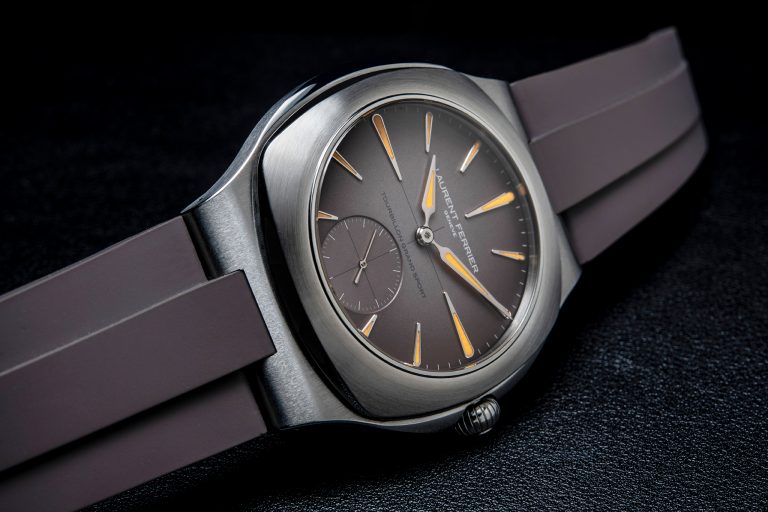 When I was invited to see the new Grand Sport Tourbillon from Laurent Ferrier at Baselworld (the watch was under embargo at the time), I was asked before it was unveiled to prepare myself.

As the watch was handed to me, I could see why I had been so warned. You see, the new Grand Sport Tourbillon was mounted, not on a leather strap as one would typically expect of watches from the brand. Instead this time, it was on a rubber strap, the first ever that a watch from Laurent Ferrier had been so appointed. 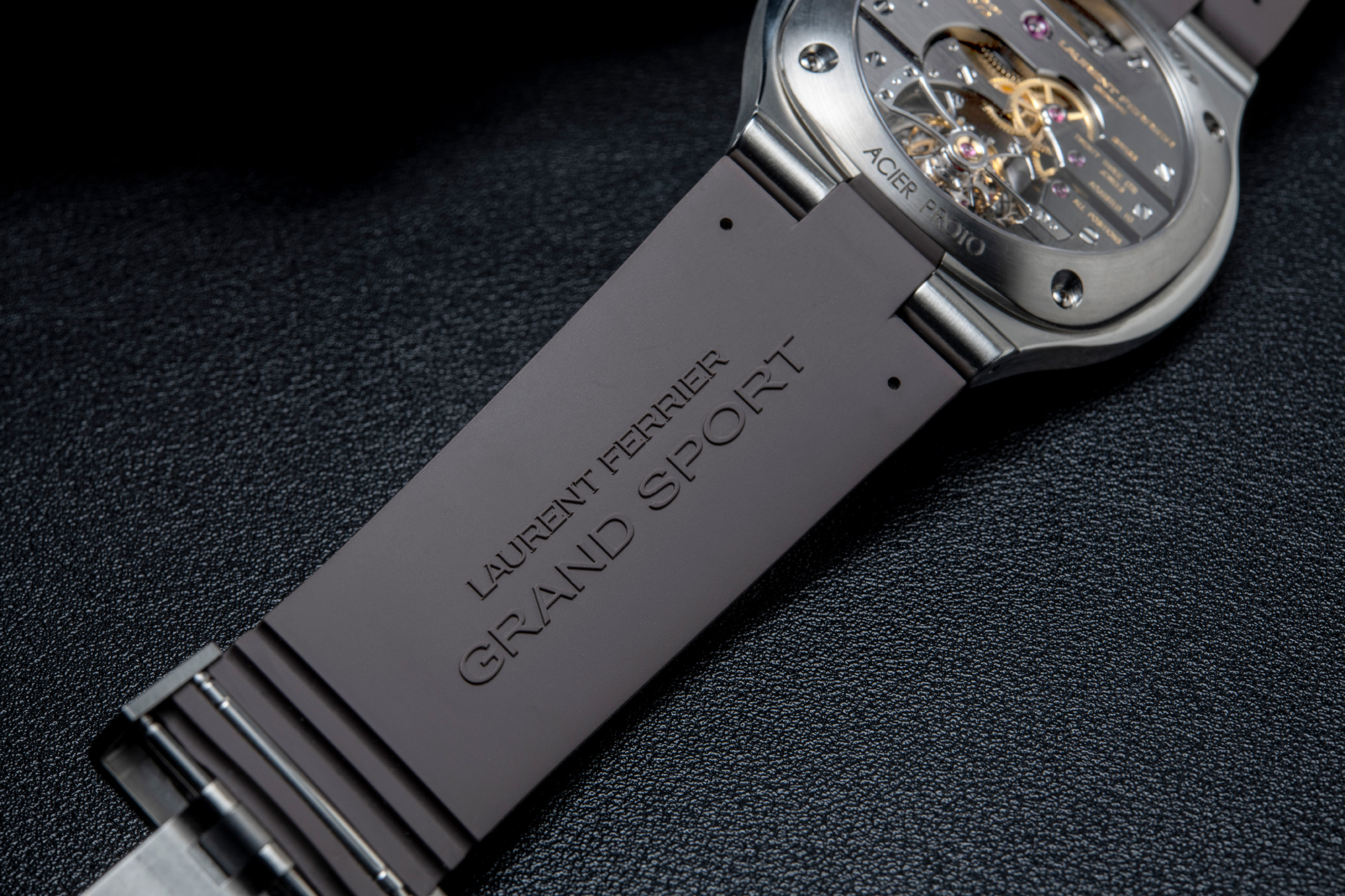 To be honest, it did feel a little strange as I put the watch on my wrist, but after looking a little closely at it, and having the idea behind it and the new collection that it is part of was explained to me, the whole thing started to make sense.

This new watch forms the first introduction of a brand new collection, called “Grand Sport”, a line that as the name implies, celebrates motor-racing.

Some of you might not know this, but the brand’s namesake founder, Laurent Ferrier, was a racing car driver in his younger days during the 70’s. It was during this time that he met François Servanin, currently a well-known industrialist, and they become good friends. The pair raced together (along with a third driver, Francois Trisconi) at the 24 Hours of Le Mans in 1979, placing third for the Porsche Kremar Racing Team in the no.40 Porsche 935. Much later on of course, the pair would come together to start Laurent Ferrier, the watch brand that we know of today.

Along with the commemoration of the 1979 Le Mans race, and also with 2019 being 10 years since the conception of the brand’s very first tourbillon, we find the watch engraved with the words “Le Mans 40th Anniversary” on the caseback, as well as being introduced with the well regarded calibre LF 619.01, coming with a Besançon chronometer certified tourbillon. 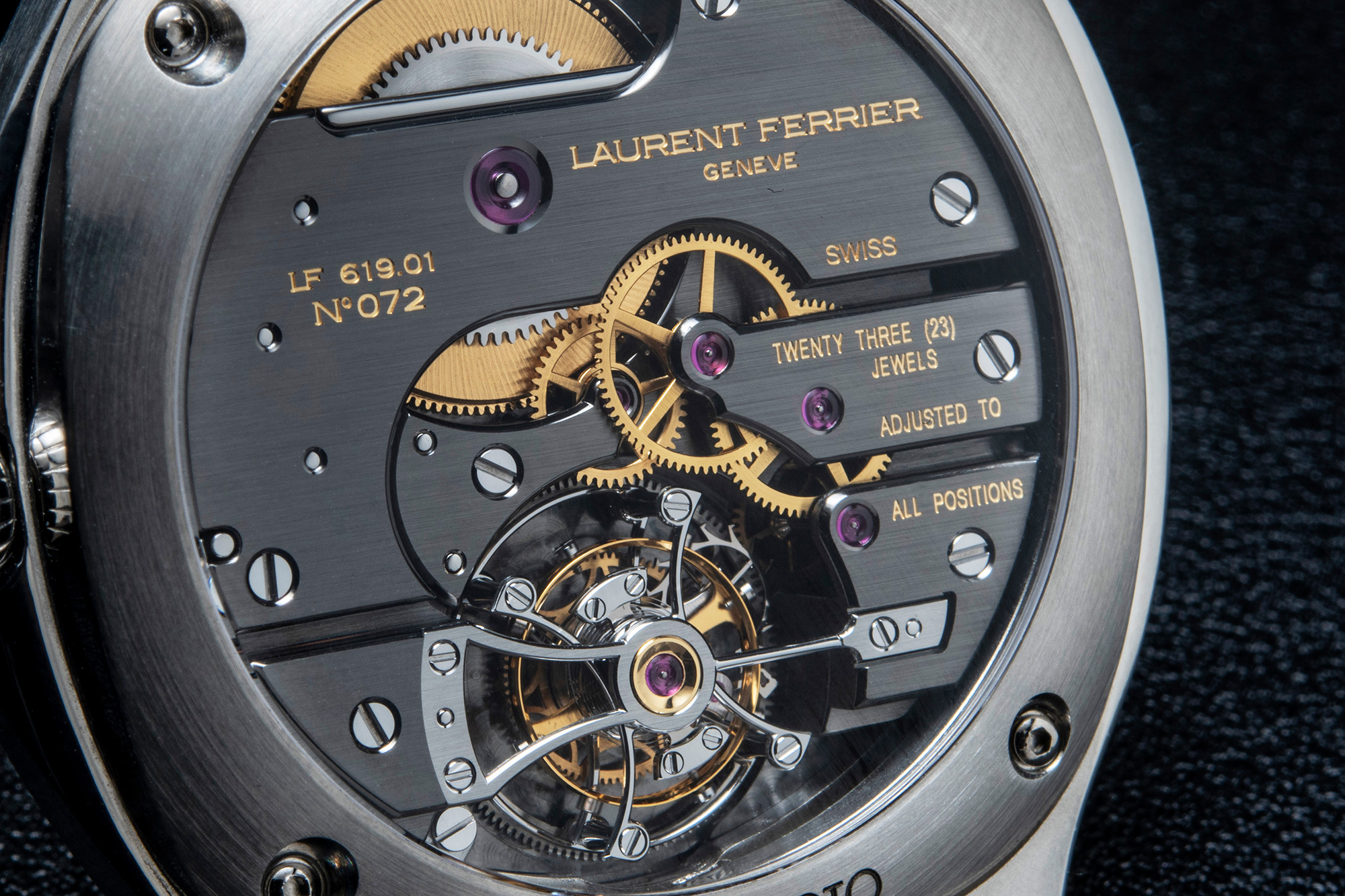 Laurent Ferrier has been expanding their offerings this year, introducing new collections of watches that deviate from the typical dressy round ones that make up one’s first impression of the brand. The first, the rectangular Bridge One that was presented at SIHH 2019 was the first expression of a new case design. Now as we approach the middle of 2019, we have yet another new collection, with a new case shape in the form of the Grand Sport Tourbillon, that comes presented on a brown rubber strap, expanding the offerings to collectors in aesthetics and emotional resonance to the founder. 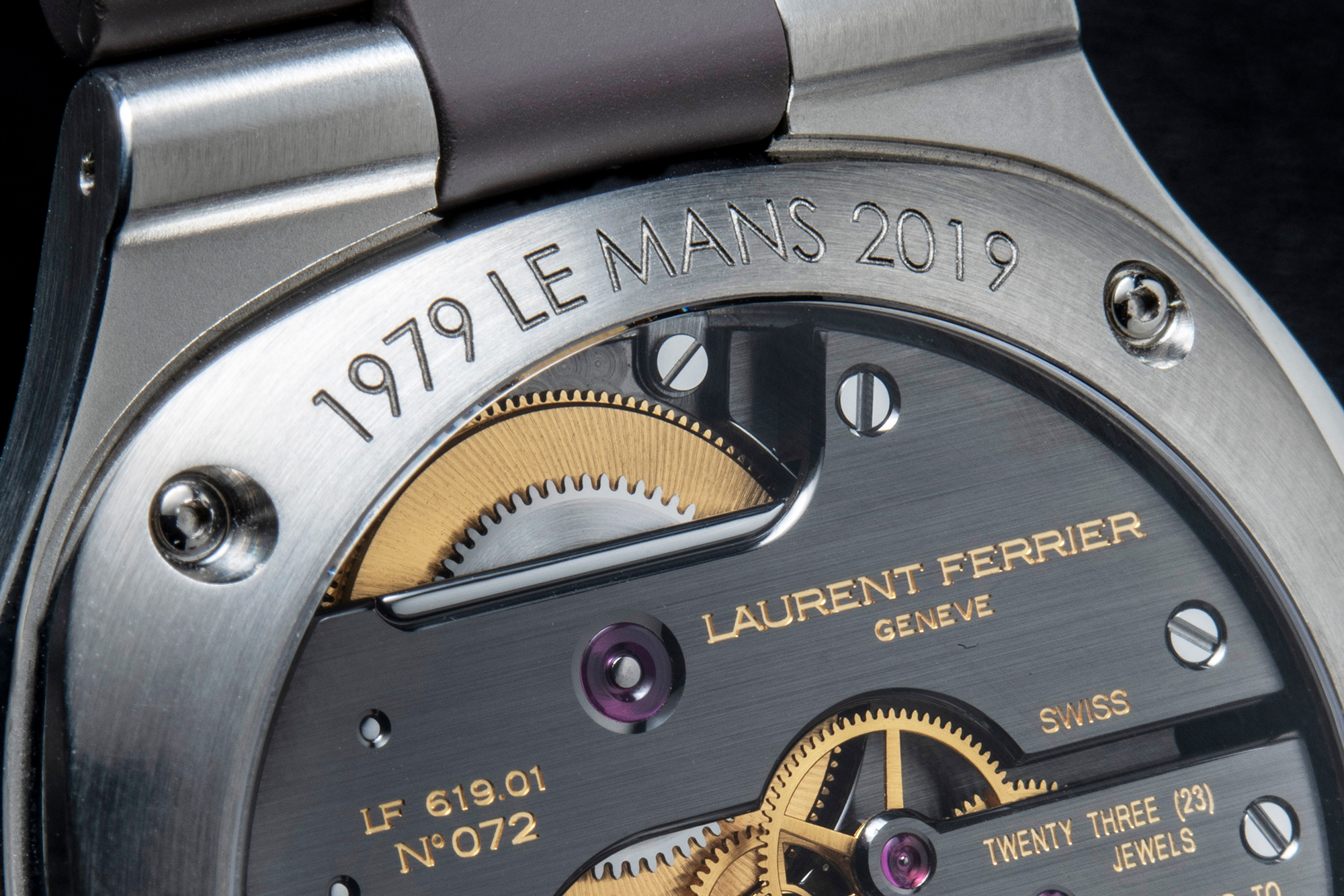 Certainly, it was about time that this portion of Laurent Ferrier’s past be put in the spotlight a little more as it provides an exciting counterpoint in the form of motor-racing to the traditional dressy round classical watches that the brand already does so well. I mean, looking at the pictures above of a younger Laurent Ferrier racing in Le Mans does make him much cooler than he already is as a first rate watchmaker.

The Grand Sport Tourbillon comes with a 44mm stainless-steel case, that might remind you of the Galet Square watches that we have seen from the brand before, but look closer and the differences become apparent. Instead of a round bezel against a cushioned shaped case, we have a cushion-shaped bezel against a slightly tonneau middle case. The lugs are also integrated with the case, presenting a stronger looking and more sporty construction. Lastly, have a look at the orange Superluminova lume on the brown gradient dial, the crown-guards, as well as the automotive looking bolts on the caseback. These are details that certainly bring to mind the era in which the watch is meant to recall. 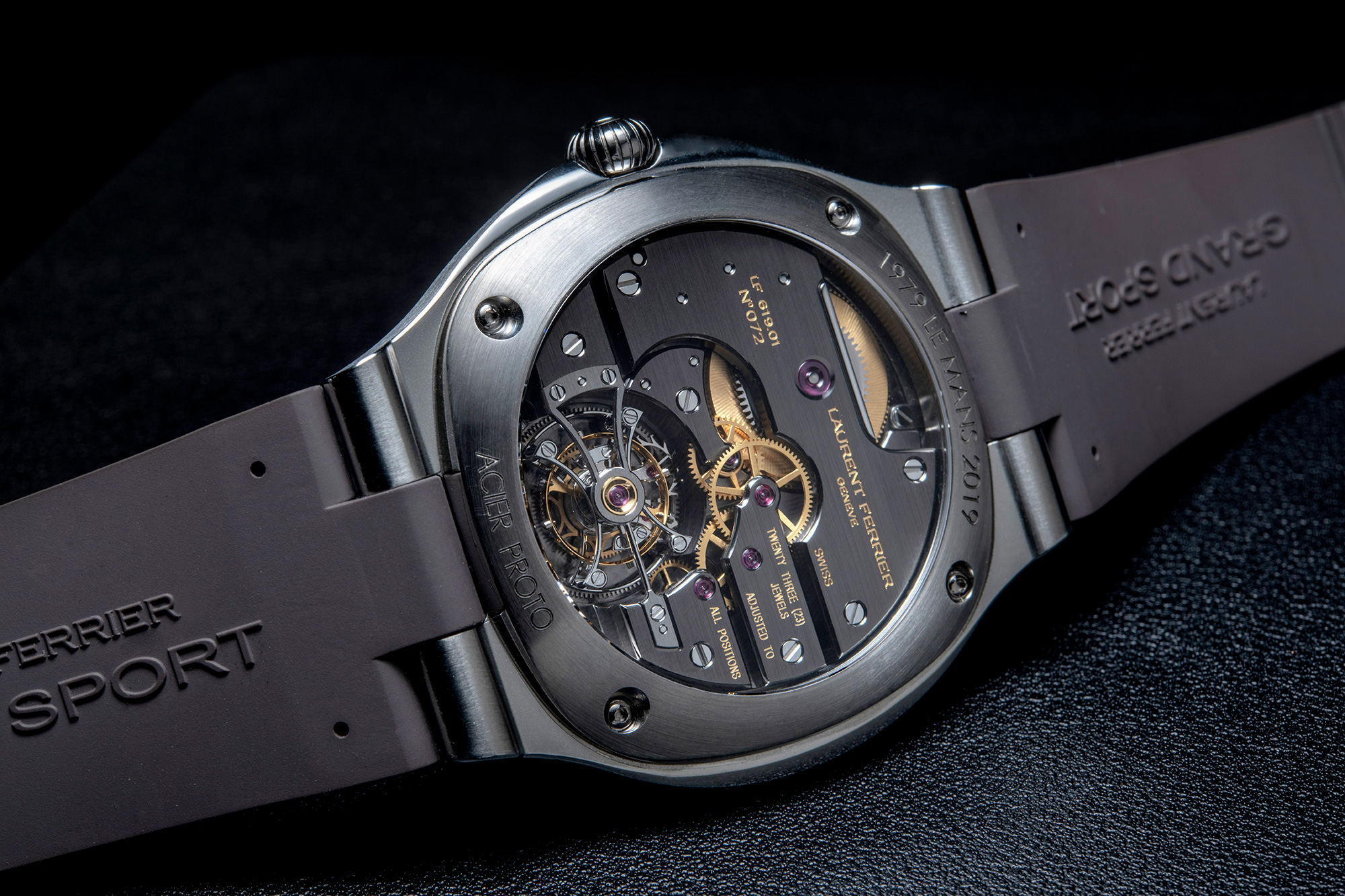 The overall effect of the case and rubber strap, makes for a comfortable watch on the wrist, balancing the weight of the case well. Viewable from the caseback of course is the calibre LF 619.01, featuring and 80 hour power reserve 3Hz Tourbillon, finished to the high standards we’ve come to expect from Laurent Ferrier. 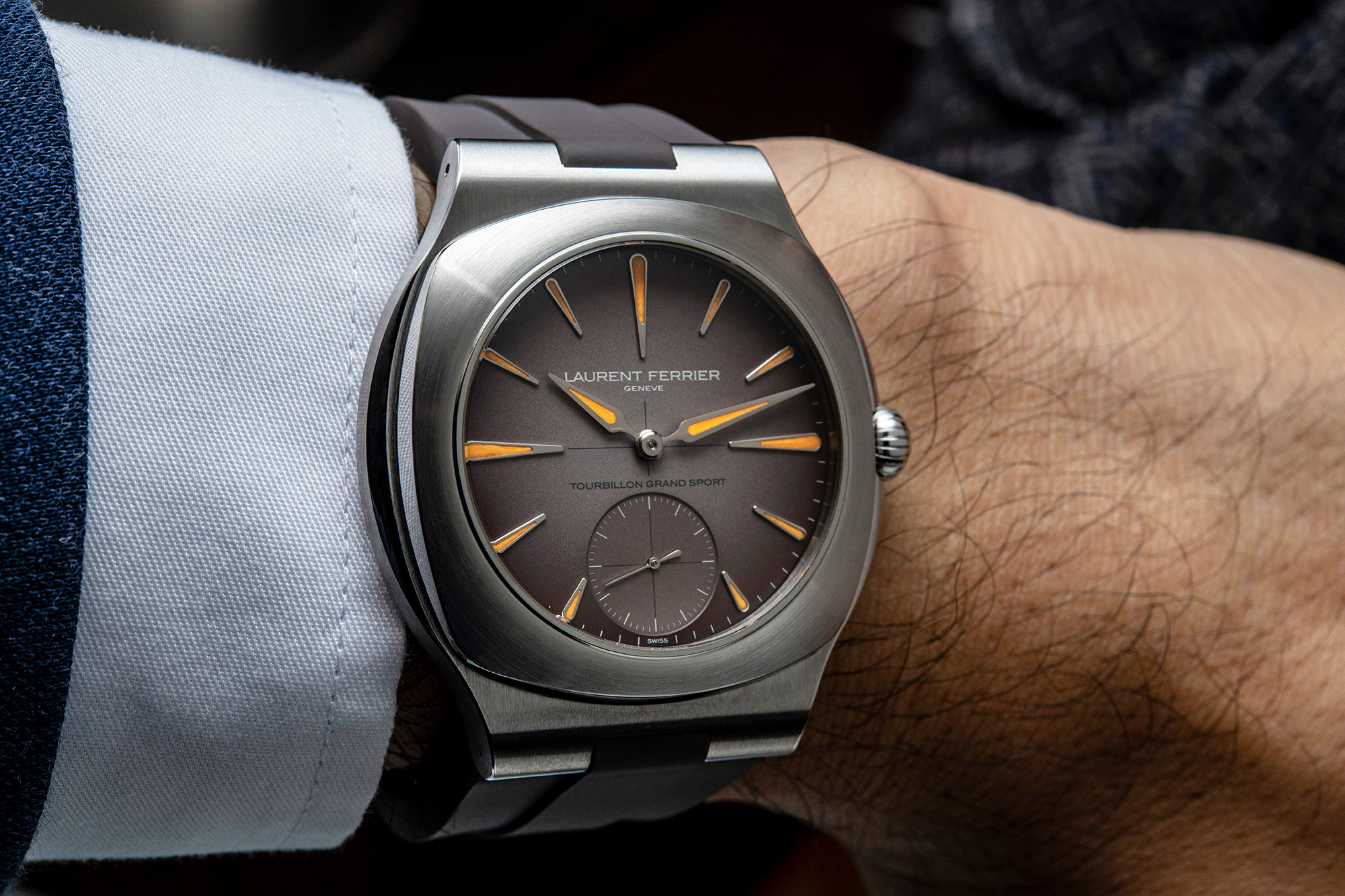 This watch is available in a limited edition of 12 pieces and comes in at a price of 172,000 CHF.