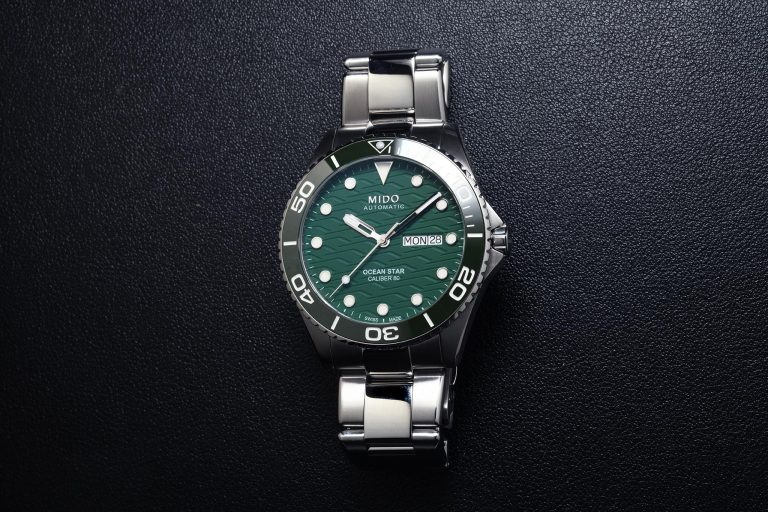 Ceramic bezels have well and truly become commonplace among dive watches nowadays and their benefits are obvious.

Aside from giving a little bit of a shine to the appearance of the watch via its reflective nature, they offer the benefit of being scratch resistant. This helps in maintaining the look of the watch over time, since the bezel is the part of the watch that is the most prone to scuffs and knocks.

The new Mido Ocean Star 200C joins this ongoing trend, with the “C” in the name standing for ceramic. While the rest of the ingredients are familiar, the use of a ceramic bezel does elevate the on-wrist presence of the watch, giving everything a more luxurious feel. This might have been the reason why Mido chose to use polished center links in the bracelet, since the overall effect, while masculine and toolish, does have a touch of elegance as well.

Three colour variations are offered, with the hero model in green, a blue version that has the feel of the Bond version of the Omega Seamaster Professional 300, as well as a quirky and not often seen grey version.

It’s obvious that the green is the hero model, since green is all the rage these days. The tone of this green is somewhat dark, the colour of mature leaves on trees in a rainforest, though it is still visibly recognizable even under low light. The blue variation reminds me a lot of the Pierce Brosnan Omega Seamaster Bond watch, and the resemblance is even more striking when you consider the wave pattern engraving on their dials.

The grey version is what I would consider the oddball of the bunch. It’s an off-beat colour, and not often seen on a dive watch. Although the colour does make the watch have something of a Bauhaus character about it.

At 42.5mm wide and 11.75mm thick, the watch has great presence, as well as good comfort given the relative slimness of the case. Round the back is an engraving of a star-fish, which is the symbol of the Ocean Star line.

Of note is the diver’s extension on the bracelet that is unlike a typical one on most diver watches, in which a fixed link is hidden in the clasp that can be pulled out. The one on the Mido Ocean Star 200C has a ratcheting mechanism that can be micro-adjusted up to 20mm, which means that it can be extended all the way for the watch to be worn over a wetsuit, or that it can be adjusted to any length in between, for ergonomic comfort should your wrist swell in hot weather.

This feature alone is worth its weight in gold in a watch like this, since not many brands allow such a large degree of micro-adjustability of the bracelet. Topped off with the Calibre 80 movement that comes with a very healthy 80-hour power reserve, what is on offer with the Mido Ocean Star 200C is what Mido as a brand has been known for offering all this while – tremendous value.

After getting to know the ins and outs of the watch industry for so long, it can sometimes be difficult to justify the prices of some of the more expensive ones around, especially so when the main features are offered at a much lower price, as in the case with this new Mido here.

Now with a ceramic bezel, and a solid feature set for the relatively affordable price of SGD$1590, it makes a good argument that sometimes all you really need is actually very attainable, and that the premium one pays for other watches is usually the cachet of a more up-market brand.

Click here to find out more about the new Ocean Star 200C at midowatches.com