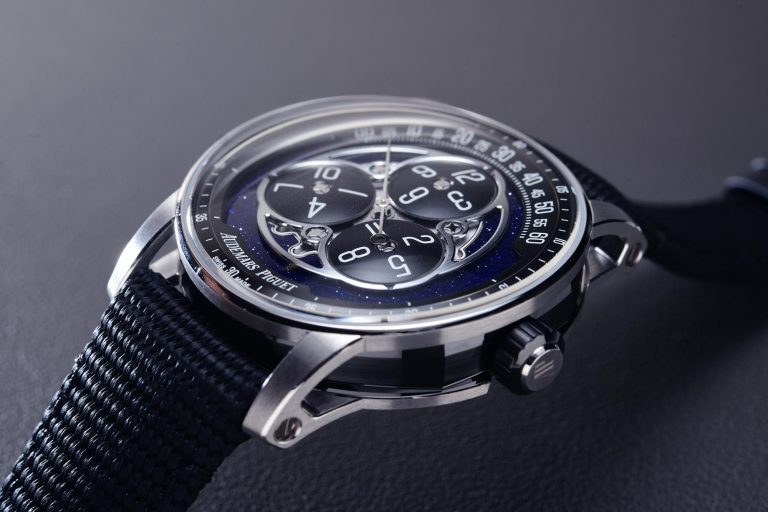 For as long as horology has existed, the watchmakers behind this art and science have been trying to devise new ways of displaying the time. In the 17th Century, we see the first examples of the wandering hours watch, where the hour indication appears to travel in an arc displaying the minutes, and where the hours are carried by discs or satellites that change on the hour. This was almost lost to history, until Audemars Piguet rediscovered this novel way of telling the time, and placed it in a wristwatch that made its debut in 1991.

The Starwheel was originally released in 1991 in a very classical guise, but its history goes all the way back to 1655, when Pope Alexander VII was suffering from insomnia that would be aggravated by the ticking of a clock. A request was made for a “night clock” – one that would be silent, and easily legible in the dark. Produced by the Campani brothers, the time was read on a semi-circle with an aperture denoting the quarter-hours, and was illuminated from inside its casing. This style of clock or watch would be popular until the 19th Century, when the complication would be replaced by the jumping hours mechanism. 1989 saw the revival of this mechanism, when an Audemars Piguet watchmaker rediscovered the mechanism that was detailed in an issue of Journal Suisse d’Horlogerie – since 1991 with the release of the reference 25720, Audemars Piguet has produced approximately 30 models containing their “Star Wheel” wandering hours complication, which has fascinated collectors with its visible mechanism on the dial side.

The new Code 11.59 Starwheel is hewn from 18 carat white gold, with a black ceramic case middle, and black ceramic crown, displaying the brand’s mastery of materials – modern and traditional. Measuring in at 41mm in diameter, the case displays an incredible amount of finishing techniques, made even more impressive given that ceramic is incredibly hard, and is given the same mix of finishing techniques as the white gold components.

A double curved sapphire crystal is affixed to the front of the watch, providing great transparency to the dial. On the reverse side, we can see the in-house Calibre 4310 ticking away behind the sapphire crystal caseback. This is derived from the Calibre 4309 which was seen in the 50th Anniversary Royal Oak models, which in this model, has a module constructed on top to accommodate the Starwheel mechanism.

The dial and movement are virtually inseparable, and it is almost impossible to talk about one without the other. The movement itself has a power reserve of 70 hours, beats at 4Hz, and is automatically wound by a gold rotor.

As previously mentioned, a module is constructed on top of the base movement to accommodate the Starwheel mechanism. A central rotor carries three rotating discs made from aluminium, and each of these discs makes a rotation on their own axis. The time is then told through a fixed disc showing the hours that travels in a 120 degree arc between the traditional positions of 10 and 2 o’clock – meanwhile, the discs in the bottom 240 degrees make their rotation in preparation to display the upcoming hour.

The central rotor displays elements of fine watchmaking finishing, with bevelling on the disc carrier. Underneath the discs is a cutting of aventurine, known for its starry sky-like appearance, and is fitting for a watch with “Starwheel” in its name. The dial also features a traditional seconds hand (the ‘trotteuse’ in watchmaking parlance), that makes one revolution every 60 seconds. The seconds hand is also curved at its tip – following the curve of the discs, but it also has a secondary function to reduce parallax error when viewed at different angles. The Code 11.59 Starwheel is fitted with a textured black rubber-coated strap, and is secured with a pin buckle that bears the Audemars Piguet logo instead of the AP monogram.

This fitting tribute to watchmaking is not only a tribute to the creativity of 90s haute horlogerie, but it is also a great reminder of watches and clocks of the past. It is also a reminder of the state of watchmaking, in that it is an incredibly ancient art and science that is a lot older than we think it is, carrying the weight of tradition, whilst moving ever forward. The Audemars Piguet Code 11.59 Starwheel, then, is that blend of tradition and modernity that the brand is known and loved for – a guardian of the past, and a brand that carries the zeitgeist to move into the future.