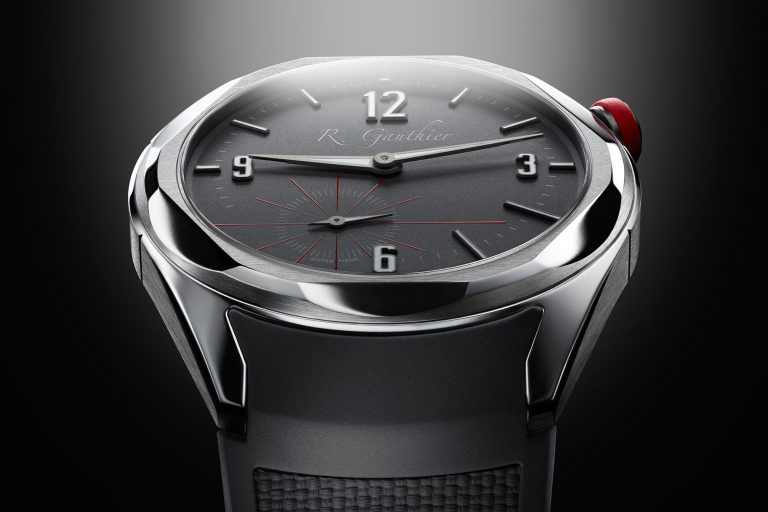 Over the past decade, Romain Gauthier has become synonymous with time-only watches that are intrinsically complex in construction and finish. They demonstrate an incredible elevation of mechanics to art and a degree of hand-finishing few can match. Today he has unveiled the Continuum Titanium Edition One, the production version of a one-off creation he released for Only Watch 2021.

Limited to 28 pieces, the Continuum Titanium Edition One is one of the most affordable watches produced by Romain Gauthier to date at CHF 37,000. It houses a brand-new hand-wound movement with titanium bridges that represent a contemporary interpretation of the traditional Genevan finger-bridge architecture found in movements in the early 20th century.

Measuring 41mm across and 9.5mm high, the Continuum Titanium Edition One can be viewed as an ultra-luxe sports watch executed with an almost obsessive attention to detail and an abundance of hand-finishing techniques. This model even has a unique logo (shown below) that has a decidedly modern outlook.

The case is made of titanium and paired with an integrated rubber strap. Although circular, it has an incredibly nuanced case design that is characterised by a striking faceted bezel, which has been further enhanced by alternating satin and polished finishes. This design is also echoed on the case back while the rest of the case features a polished top surface with brushed flanks.

Interestingly, the case band shows what appears to be parting lines at first but are actually grooves engraved on a one-piece case band to give the watch a subtly unusual profile. At the same time, the lugs have a geometrical shape that seamlessly embraces the strap. The crown is located at two o’clock on the case and features a rubber ring that adds a pop of colour.

Although not immediately apparent, the dial is equally nuanced and unusual. The hour and minute hands are actually slightly off-centered while the hour indices are of varying lengths radiating out towards the periphery. The five-second intervals of the subsidiary seconds at seven o’clock are also marked by radiating red lines of varying lengths.

The hands, applied numerals and indices are all made from solid white gold and filled with Super-Luminova while the dial is made from natural titanium that has been sand-blasted and treated with a special coating that protects it against UV rays.

Inside the watch is the new hand-wound movement with a 60-hour power reserve and a stop-seconds function. It is characterised by large, horizontal, finger-style bridges that are raised, providing a sense of depth to the movement. The configuration of the bridges also offers excellent visibility; the entire wheel train beginning with the mainspring barrel at 12 o’clock to the regulator can be viewed from the case back.

Most prominently, Gauthier has developed a distinctive style of finishing that departs from his earlier movements. Although predominantly matte save for the black polished winding click, snail cam and screws, it features a multitude of textures. Made of titanium, the bridges have a recessed surface with a hand-engraved, dimpled texture while the raised border has a straight-grained surface. The outer edges of each bridge also feature a double bevel with a sand-blasted finish while the base plate has been frosted by hand.
All the gears, including the ratchet and escape wheel, feature Romain Gauthier’s signature circular spokes while the screws are proprietary and feature a patented, S-shaped slot that requires a custom screwdriver.

The escapement and balance are also of a proprietary design. The free-sprung balance features curved arms with calibrated eccentric weights while the escapement has a triangular lever for greater rigidity and longevity.