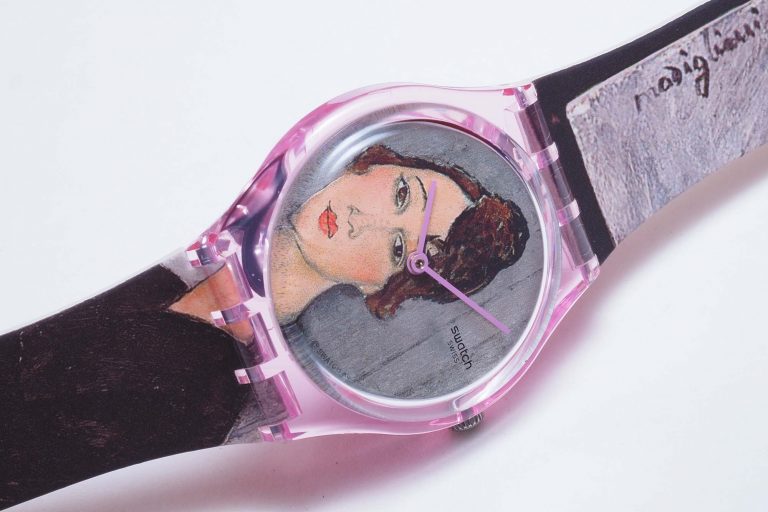 The Museum Journey series has resulted in a number of stunning watches that combine the chameleonic blank canvas that the basic SWATCH design is and the world’s most famous and well regarded masterpieces.

For 2022, the famed Centre Pompidou in Paris joins an impressive list of museums – including the Rijksmuseum Amsterdam, the Thyssen-Bornemisza National Museum in Madrid, the Musée du Louvre in Paris and The Museum of Modern Art (MoMA) in New York – in collaborating with SWATCH for a series of watches based on the highlights of the museum’s collection.

These six iconic masterpieces are from artists that art lovers will recognise, including Frida Kahlo, Amedeo Modigliani, Robert Delaunay, Vassily Kandinsky, and Piet Mondrian. Look below for details of each watch and my opinion and commentary.

PORTRAIT OF DÉDIE, BY AMEDEO MODIGLIANI

THE WATCH celebrates the Italian artist whose iconic portraits captured the face of early twentieth-century Paris. Swatch includes the artist’s signature on the Gent strap, a metallic finish on the dial, and an unexpected pop of solid pink on the case, buckle, loop and hands.

This is probably my favourite piece out of the collection, with the entire watch encompassing the main elements of Modigliani’s original portrait. Not only does the upper strap match the wall in the painting, but the lower strap as well matches the dress of the lady. The reproduction of the lady’s face on the dial is perfect as it allows one to appreciate the main part of the painting with the watch on the wrist, something that I think should have been done with some of the others in the collection. The metallic finish that forms the background of the lady’s head on the dial is a real surprise though, and elevates the watch in my opinion, since it isn’t so obvious initially, but grabs attention when the light hits it just right. The only thing that I would have liked is to have this piece in the larger size, but I can understand why SWATCH chose to have it smaller given the subject and the possible buyer.

THE WATCH takes inspiration from the artist’s third version of the painting after he destroyed the first two versions. Delaunay sought to depict movement through color; something Swatch was adamant about capturing. The special cut-out dial with different colors printed on the calendar wheel ensures a dynamic element to the design of this Gent watch.

This watch has been well received and it’s easy to see why. Even if you know nothing of the artist or the original painting, the colour scheme and design is easy enough on the eye. The best feature though has to be the changing colour on the dial, courtesy of a cut-out that is triggered by the date wheel. Which means the colours change every day. It certainly animates the idea behind the original painting. It is called “Carousel” after all.

THE WATCH reimagines the artist’s famous corner angle depiction of the Paris landmark in all its glory. The proportions of the Gent watch remain true to Delaunay’s original, while the dial, strap and hands feature vibrant reds, yellows, oranges and blues.

I’m not too keen on this one, purely and simple because it doesn’t work when worn on the wrist. The main element of the original painting is the Eiffel Tower, but because of its position on the lower strap, it will be hidden from view most of the time, and even so will be distorted as the painting rounds the wrist.

THE FRAME, BY FRIDA KAHLO,

THE WATCH sees Swatch reimagine one of the artist’s most famous self-portraits as a mirror image perfectly split between the six and twelve hours of the dial. The Frame’s bright festive colors feature on the NEW Gent watch front, perfectly offset by the pink base and underside of the strap.

This could possibly be one of the more popular watches in the collection because of the fame of the artist and her work. However, I feel that it is a bit of a missed opportunity given that I would have preferred Frida Kahlo’s self portrait on the dial of the watch like the Modigliani. It is nice that her portrait is reproduced twice on this watch, referencing her exuberant and over the top style, but on the wrist what you see on the dial is the mirror image of the bottom edge of the frame of the original work. The position of Frida’s portrait as shown in the picture below is upside down as well when seen from this point of view, which might have some artistic reasoning as to its location, but generally I feel that this watch works more as a display piece laid flat.

THE WATCH pays tribute to the founding father of geometric abstraction, whose influence is most notable in the realms of fashion, architecture and design. Swatch has ensured that the exact tonalities of the original artwork are depicted on the New Gent, complete with a matt black dial and oversized hands.

If you’re a fan of Mondrain, this watch will appeal instantly to you as it is easily embodies the spirit of the original work. It is also, if you’re keen on minimalistic aesthetics and have no idea or interest in the original artist the perfect choice as well.

THE WATCH, continues the artist’s fascination with the color blue. Swatch reproduces Kandinsky’s deep and textural painting technique to the New Gent design and features many intriguing characters that inhabit the original painting.

This watch is easily the most attractive piece, referencing the original well, yet being overall aesthetically pleasing as a watch to wear on the wrist. This is possibly due to the relatively small size of the abstracted elements in the original painting which allows the wearer to read it by the overall colour palette, or look closer at the details. It also reminds me somewhat but not exactly like the Starry Night by Vincent Van Gogh from the SWATCH X MOMA Collection (linked below)

The collection is available to buy individually or as a special limited edition showcase box shown below, at SWATCH boutiques or online at swatch.com.