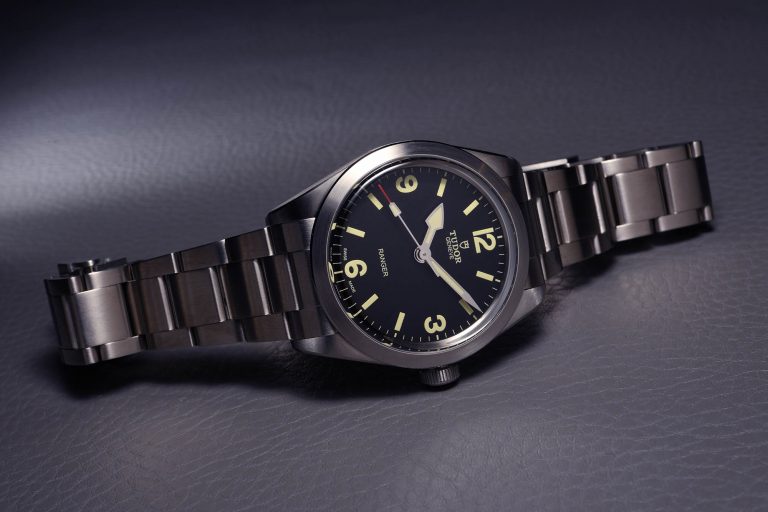 According to the book “Treasures” by the Beyer Watch and Clock Museum, Ludovico Sforza, the Duke of Milan in the late 1400s, owned a watch with a striking mechanism (a precursor to the minute repeater) that was sewn into his clothes. Whilst this represented the epitome of luxury, class and status at the time, as industrialisation grew, access to robust and reliable timekeepers became more accessible to those who required them.

As such, in the modern era, watches have always had an air of utilitarianism, no matter who or what they were created for – their very nature of being a timekeeper automatically makes us evoke a tool that is purpose built. These watches would accompany explorers to far flung corners of the world – including the ice sheets of Greenland. In particular, it would be a Tudor that would accompany British explorers on this odyssey to the Arctic Circle – and to celebrate the 70th anniversary of this expedition, Tudor has unveiled a new version of the Tudor Ranger, adding to its impressive stable of heritage-inspired watches.

On the 8th of July 1952, the expedition party left Deptford (located on the Thames), bound for Greenland. Their mission – to study important glaciological samples, seismic activity in the region, as well as gathering performance data on 30 Tudor Oyster Prince watches that would accompany the party on their surveys.

As part of preparations for this expedition, the watches were specifically lubricated for extreme cold conditions, as well as bracelet extensions that enabled the watches to be worn on the outside of insulating parkas. In addition to this, the explorers would be noting the timekeeping performance of the watch in comparison to timing signals they would receive from the BBC. One comment from a member of the expedition party stated that his watch was “maintaining a remarkable accuracy”, and that “on occasion did it require to be wound by hand”. This led to the “Trial of destruction”-type of messaging that would be the signature of Tudor – watches that were focused on performance under adverse conditions, rather than status and prestige.

The aesthetics of the Tudor Ranger that we see today originally appeared in the 1960s, with its matte black dial, and hour markers and hands given liberal amounts of luminescent material for excellent legibility. Over the years, we see the Ranger marque appearing on models with and without the date, and even an integrated bracelet ‘Ranger II’ model around 1973. 2014 would see the last release of the Tudor Ranger in a 41mm case with an ETA movement, before it was discontinued in mid-2020.

The modern re-creation of the Ranger comes in at a 39mm diameter, which brings it more in line with the original models coming in at 36mm, giving it a good mix of vintage and modern case proportions. The case is entirely satin brushed, with some polished accents on the bezel and the lugs to accentuate their lines. The screw-down crown provides 100m of water resistance – enough robustness for a casual swim. The dial is matte black with a grained texture, featuring a clean aesthetic – no date windows are present on this model.

Most distinctively on this dial are the large Arabic numerals at 12, 3, 6 and 9 o’clock, and all of the markers and hands have SuperLuminova that is liberally applied for optimal visibility. The hands are also a distinguishing feature of the watch, with a rounded shape for the hour hand and an angular shape for the minutes hand, making them easily readable at a glance. The seconds hand bring their vintage inspired shape to this modern model, with the additional flourish of a tip painted in a burgundy colour.

The watch can be delivered on three strap options – the Jacquard strap in olive with red and beige straps woven by the artisans at Julien Faure, a hybrid strap with fabric-textured leather and a rubber backing, or on a stainless steel bracelet with form-fitting end links and their now lauded “T-fit” clasp that enables quick adjustment of the bracelet up to 8mm.

Housed within the new Tudor Ranger is the MT5402 which is manufactured by their movement partner Kenissi. The movement boasts a silicon balance spring for anti-magnetic protection as well as a traversing bridge construction for the balance wheel that ensures stability. It also features a 70 hour power reserve, and COSC certification, guaranteeing timekeeping performance between -4 and +6 seconds per day. For this movement, Tudor insists on heightening the tolerances of this movement, and claims that their standards stipulate the movement runs between -2 and +4 seconds per day (an improvement of 40%).

Tudor was created to bring the reliability and robustness of its sister company to more people, with the Ranger and indeed the Oyster Prince proving their chops in extreme environments. Through this and their other exploits, Tudor firmly cemented themselves as producers of fine tool watches over the years. Today, the Tudor Ranger joins the Heritage Chrono as part of their collection of sports watches that have lasted the test of time. In particular, the Tudor Ranger really displays the brand’s commitment to its heritage – giving modern touches to a vintage classic, and celebrating true achievements and explorations of the Earth that have furthered our understanding of nature and our place in it.

Steel screw-down crown with the TUDOR rose in relief

Hour, minutes and seconds hands at the centre