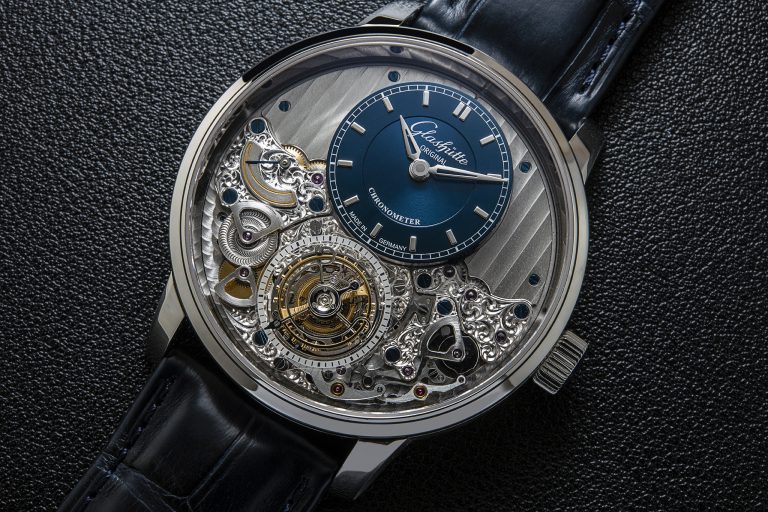 One of the best releases this year in 2019 from Glashütte Original has to be the Senator Chronometer Tourbillon – Limited Edition Platinum, a watch that combines some serious technical chops with an aesthetic that I am generally quite partial to.

You see, watches where the time indication is relegated to its own sub-dial leave a lot of space for other complications to be highlighted, and in such a rendition, some interesting things can be shown.

In this case, the highlight feature is the flying tourbillon that occupies the lower half of the dial, rising up, like the main time sub-dial at the upper half, like two towers above the rest of the movement. Of course, it has to be a flying tourbillon, because it was German watchmaker and teacher, Alfred Helwig, who invented it in the 1920’s, while he was working in Glashütte in his own chronometry workshop. Incidentally, the watchmaking school in Glashütte is named after him in his honour.

Yet the tourbillon in the Glashütte Original Senator Chronometer Tourbillon – Limited Edition Platinum is unlike the vast majority of tourbillons on the market, in that it comes with a relatively rare feature – a hacking seconds function. 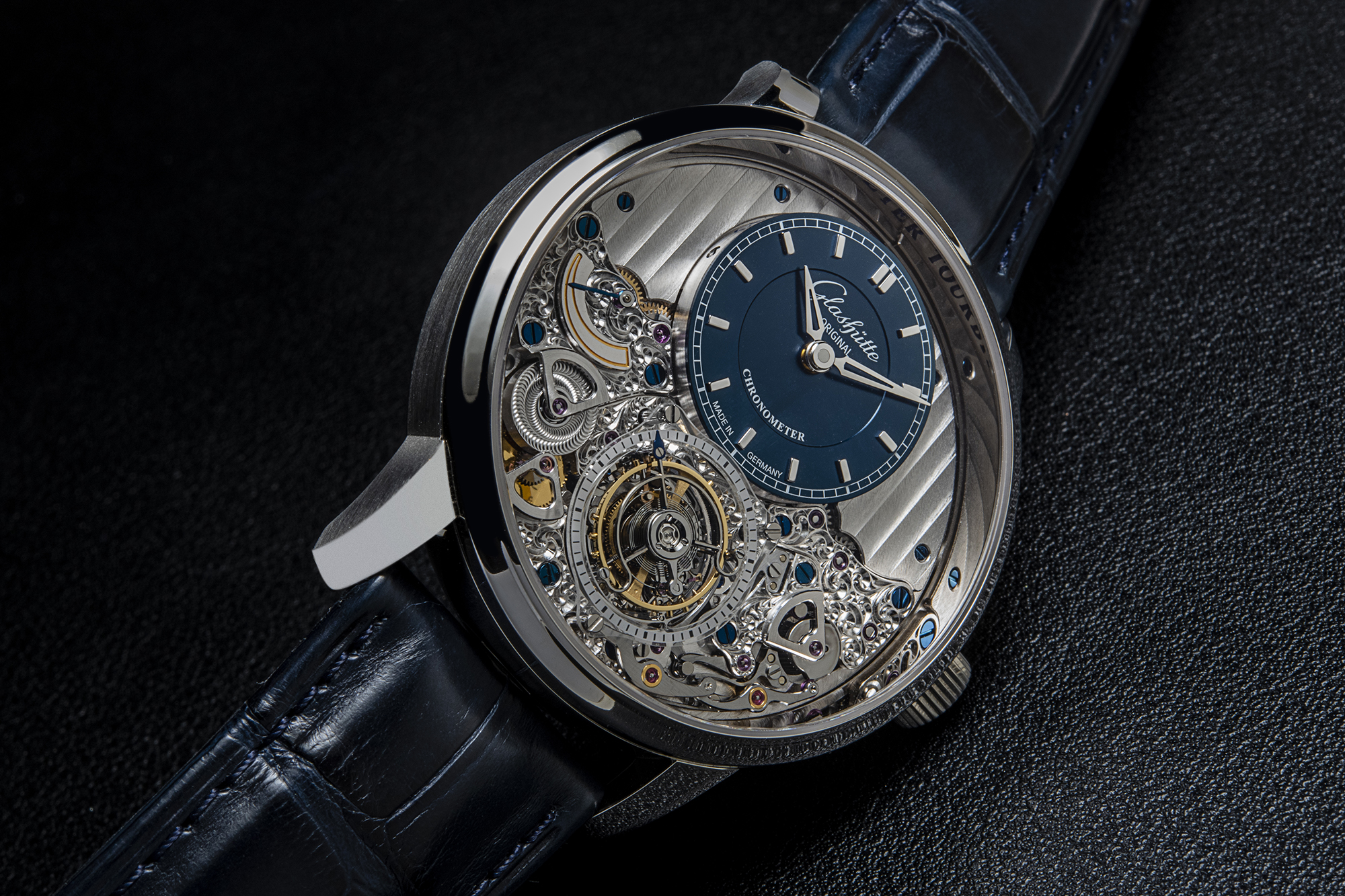 While there are differences in how it is done, to explain it simply, in these tourbillons, when the watch is hacked, metal fingers come in horizontally to touch the balance wheel while it is moving, effectively stopping the watch. 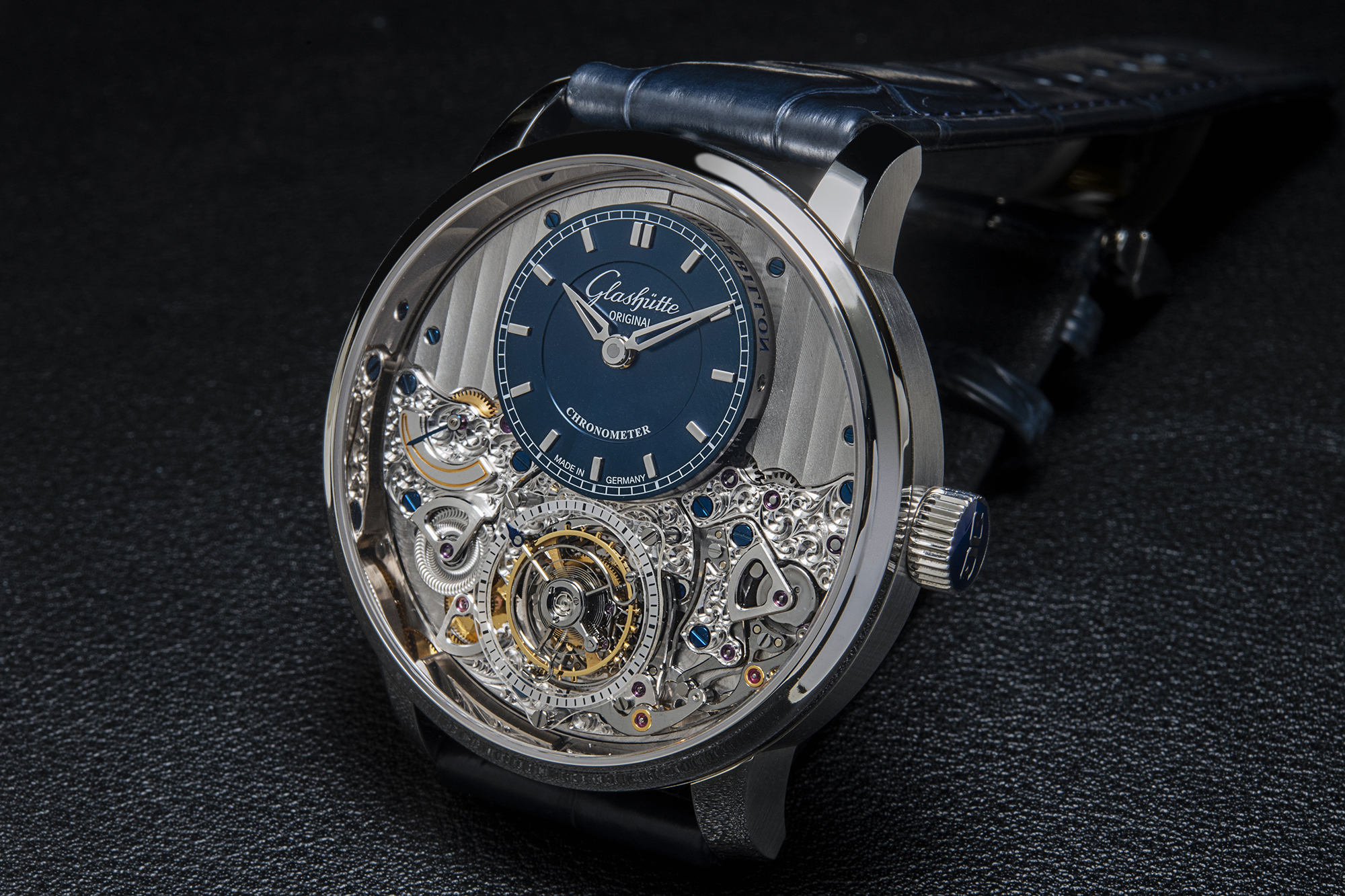 The Glashütte Original Senator Chronometer Tourbillon however differs in its approach and stops the watch via a vertical clutch underneath the tourbillon – think of how it is done in a vertical clutch chronograph – without anything touching the cage directly.

After the tourbillon is stopped, we find the next important feature, the zero-reset, that comes about when the crown is pulled further and held in position. At this point, the second hand advances to zero smoothly, with its motion controlled by a governor, and at the same time, the minute hand advances to the next index, preparing the watch to a standby position to take a time signal for setting.

The sum of what it can do therefore means that one can set the watch very accurately, which is important since it keeps to the original raison d’etre of the tourbillon. Furthermore, to extinguish all doubt that accuracy is the main goal of this watch, it is also a certified chronometer. Note however is that it is not certified by the Swiss COSC (Contrôle Officiel Suisse des Chronomètres) as you might think, instead the certification is done by the German Calibration Service in Glashütte in conformance to the DIN 8319 standard.

The other important features of the watch and its calibre 58-05 movement is that the balance spring is made of silicon, offering protection against magnetic fields and changes in temperature, and it beats at a frequency of 21,600, vph, with a power reserve of 70 hours when fully wound, as indicated by the display at 9 o’clock on the dial.On the wrist, the weight is easily felt since the 42mm case comes in platinum, yet despite this, the 12mm thickness of the case ensures that it will wear well under a shirt cuff. Aesthetically, while I am not too keen on the baroque style hand engraving that dominates the lower half of the dial, I think that in combination with the Glashütte stripe finish on the top half, and the way that the dial elements are arranged, that it is pretty enough to make me overlook it. As a total package, yes, this is a watch that works for me.

What’s nice in terms of aesthetics are the little details, for example the sapphire seconds track around the tourbillon that is raised and held in placed by “pillars”. Another detail is that the words “chronometer tourbillon” that are visible on the chapter ring – when viewed from a steep angle from the bottom, is a reflection from the ring around the base of the time sub-dial (dial fastener), engraved backwards so that you can see them the right way round in the reflection. Think of how ambulances print the word “ambulance” backwards so that they can be read the right way round in the rear view mirror. 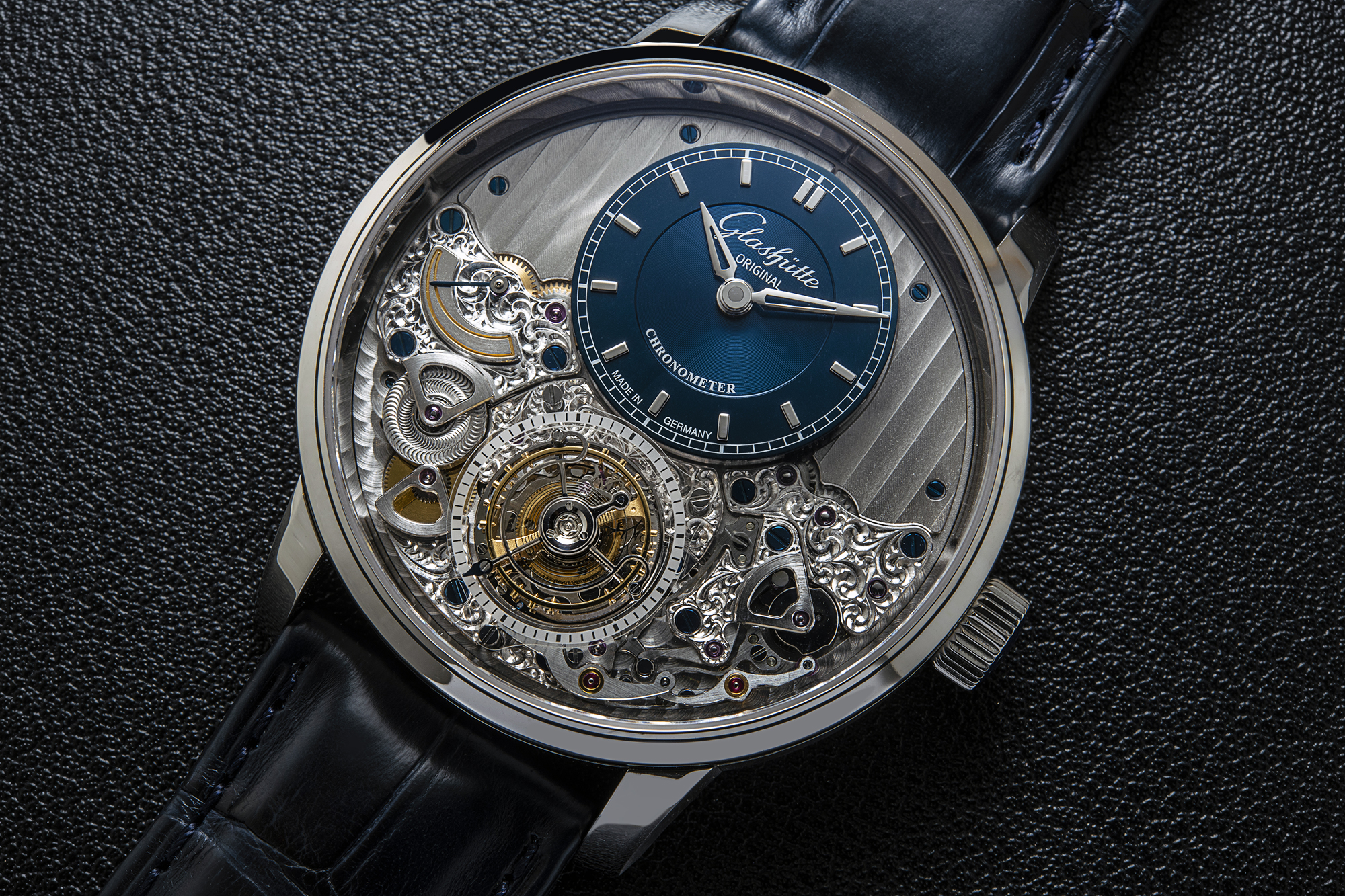 Limited to 25 pieces in platinum, the asking price for this accuracy focused Chronometer is 150,000 Euros.