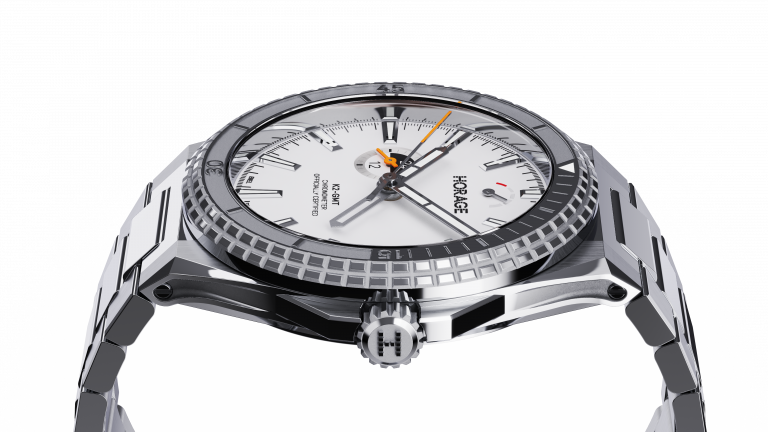 The Horage Supersede has already captured the attention of the watch world, with its intriguing movement (the K2 micro-rotor movement with GMT and 70 hours of power reserve), contemporary integrated bracelet sports watch design, and its value proposition (priced at CHF 6500 after pre-order rounds are completed). With the release of initial pre-orders scheduled for November 2022, the Supersede is shaping up to be one of the most anticipated releases from the brand so far. To add to this, Horage has also engineered a unique bracelet for the Supersede that promises the utmost comfort for its flagship release – befitting of the watch that will lead the brand forward for the years to come.

This new bracelet features a micro-adjustment system – seemingly over-engineered in its execution, yet achieving maximum comfort for the wearer. A ratcheting clasp seemed to be the most obvious choice for its ease of use, however, Horage wanted to avoid the issues that other brands have encountered – some ratcheting clasps actually extend past the clasp, making it uncomfortable for smaller wrists. Markus Lindstedt at Horage worked on designing a ratcheting clasp that is ultra low profile, and one that would not extend too far past the bracelet itself. The result is a clasp that is 5.6mm in height, and extends only 1.25mm past each side of the bracelet, whilst incorporating the ratcheting mechanism within its 40mm body length.

To operate the bracelet ratcheting mechanism, one only needs to open up the bracelet, and press on the ridged area in the centre of the bracelet. From there, part of the clasp is depressed, allowing the finger (or thumb) to slide up or down to extend or contract the bracelet.

As mentioned before, the ratcheting mechanism does not travel past the clasp, leading to greater comfort – it also allows for the watch to be put on slightly larger, and for the bracelet to be simply pushed in to adjust the size, all while the watch is secured on the wrist. The clasp is secured via a double push-button system, with dual pins that prevent accidental opening when the clasp is bumped.

The Supersede is shaping up to be one interesting watch indeed, with its movement, fan-based design and now its bracelet that encourages comfort and ease of wear. At the time of writing, the Supersede is currently in the “Early Bird” pre-order stage, ending in March 2022 with a price of CHF 4900 and delivery expected in December 2022. Another two rounds of pre-orders will be offered throughout 2022 for those still considering the Supersede – in any case, the watch represents exceedingly great value for a Swiss Made watch carrying its credentials. To read more about the Horage Supersede, click here for more.

Horage has informed us that a prototype of the bracelet will be ready sometime in the early part of 2022. Hopefully there will be a sample for us to take a look at. With the specification as described, it should add another interesting dimension to an intriguing watch that will certainly find broad appeal when it is released.

Horage has already shown us its watchmaking chops by making their own movements. Now, they have decided to dedicate their effort into developing a useable, comfortable, and technically advanced bracelet, a course of action that really differentiates them from many other brands that produce lacklustre bracelets that are deficient in quality and function.

Let’s see how this goes.