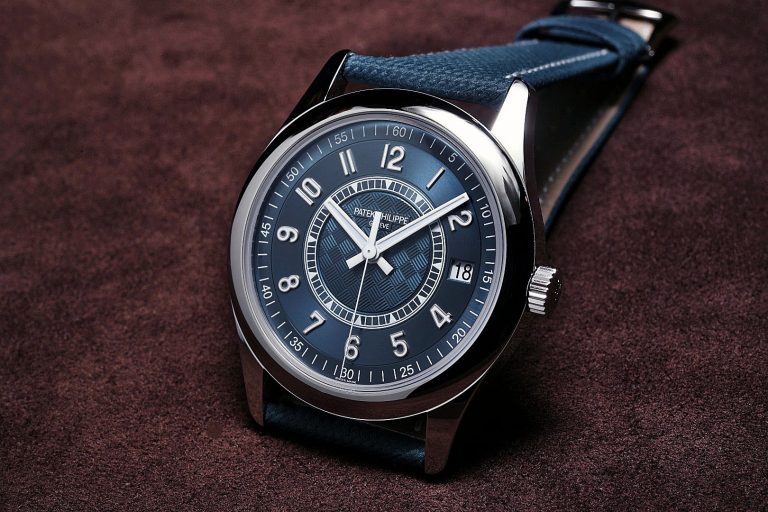 A new Calatrava for a new manufacture

Given the fact that Baselworld was cancelled this year, the launch of this new Calatrava was a bit of a surprise. Initially I had assumed that this watch was part of the releases meant to be shown at Baselworld, but that’s not true as its purpose is actually very specific – to commemorate the completion of their new production building in Plan-les-Ouates in Geneva. 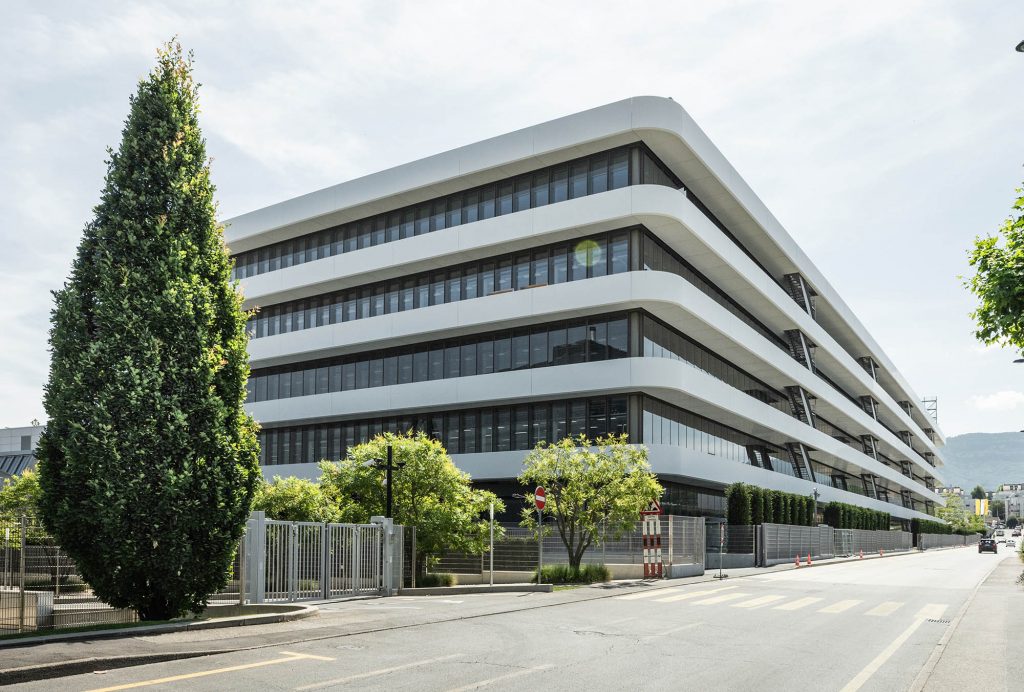 Now Plan-les-Ouates is an industrial suburb in Geneva that is home to a number of high profile watch brands such as Frédérique Constant/Alpina, Harry Winston, Piaget, Ralph Lauren Watches & Jewelry, Rolex, Vacheron Constantin and of course, Patek Philippe. In fact, Patek Philippe was the first brand to be established there in 1996.

At the time, the plan was to unite all the disparate workshops around Geneva and unite them into one building. Over time however, space became tight, and with the increased demand for watches with rare handicrafts as well as complicated models accounting for half of the brand’s production, it became necessary for more working space overall, not just for production and storage of more parts, but also for training. 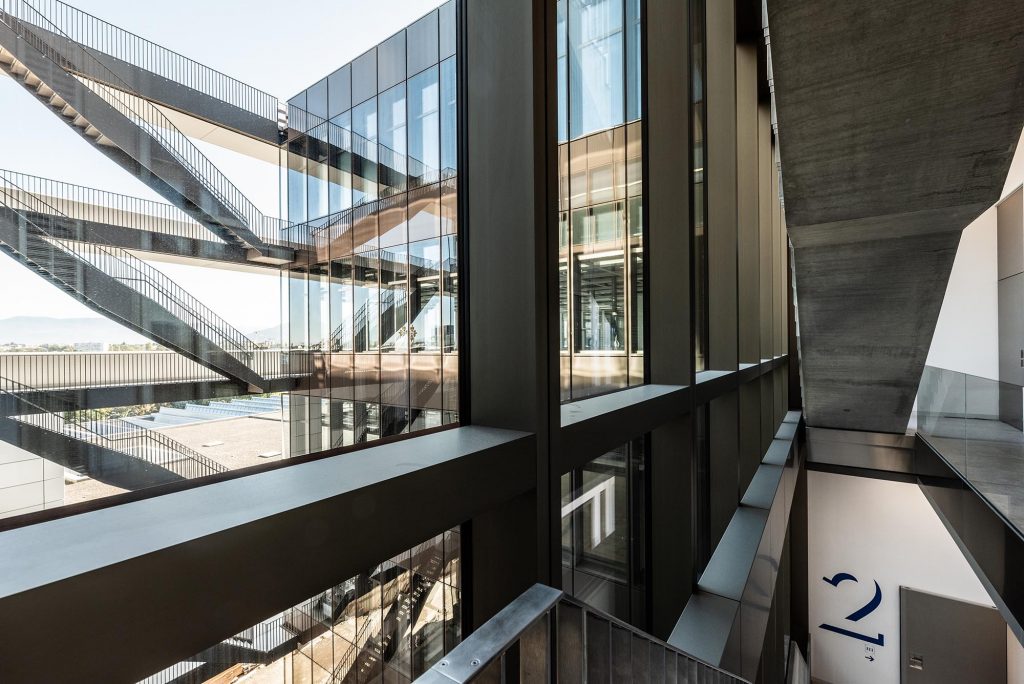 Patek Philippe currently maintains an annual production capacity of 62,000 watches, and while some might say the increased space is for the purpose of increasing this number, it looks instead that it is for devoting greater resources to the larger number by proportion, of the brand’s output, of the complicated and time intensive to produce watches that watch collectors worldwide are demanding. Some interesting features of the new building: The ground floor will be dedicated to the production and finishing of movement parts; the second floor will be for machining, polishing and assembly of exterior parts for current watches, the restoration of antique timepieces (thanks to the brand’s long history), and the production of spare parts for inventory. The third floor will house production-related departments such as Research & Development (responsible for the Patek Philippe Advanced Research watches), an haute horlogerie department, and a new unit for prototyping. 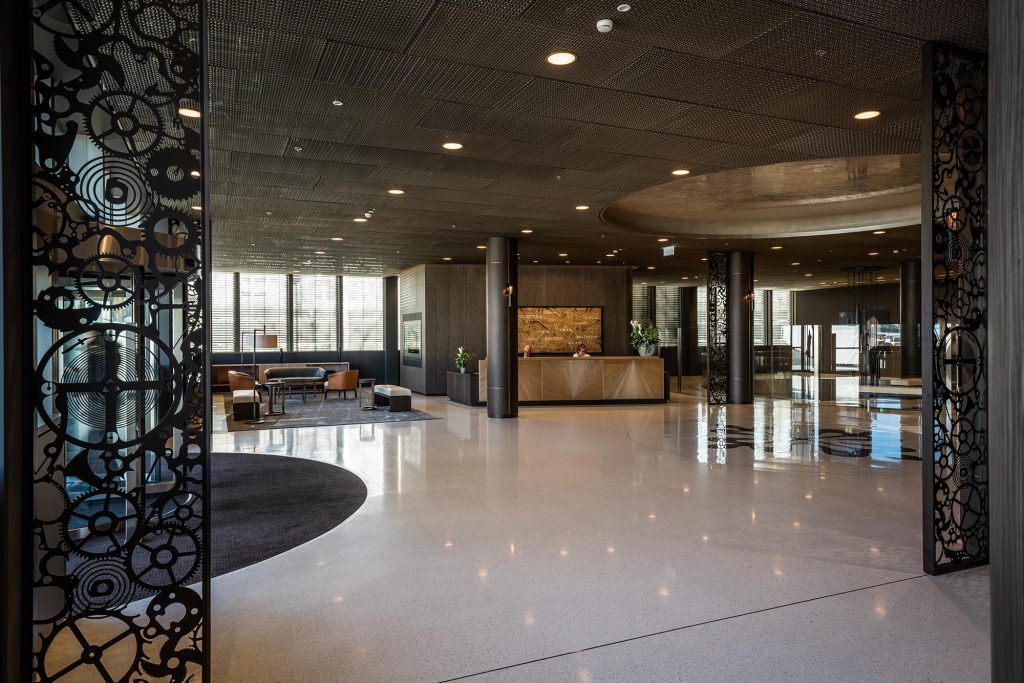 The fourth floor is an interesting one, as it will be devoted to ateliers dedicated to the rare handcrafts skills that Patek Philippe has actively promoted in their watches (manual engraving, enameling, guilloching, wood micro marquetry, etc.) Here, masters of their craft will not only have adequate space to do their work, but can also pass on their skills to others via training rooms that are also on the same floor.

The fifth and highest floor will house a penthouse restaurant for 880 guests as well as four VIP lounges, all with a fantastic panoramic view of the landscape and the nearby mountains.

Lastly for the convenience of staff and visitors, the four subterranean basement floors will contain all building technology installations as well as a parking facility for a total of 635 vehicles.

The Calatrava collection has always been the quintessential expression of a simple watch from Patek Philippe Though its thunder has been stolen in recent times by the more sports oriented Nautilus and Aquanaut collections, it still remains a strong and vital pillar of the brand. Introduced in 1932, shortly after the Stern family acquired the brand, the first model, Ref. 96 has gone on to become an icon, spawning a collection of cherished watches that have served their owners faithfully. 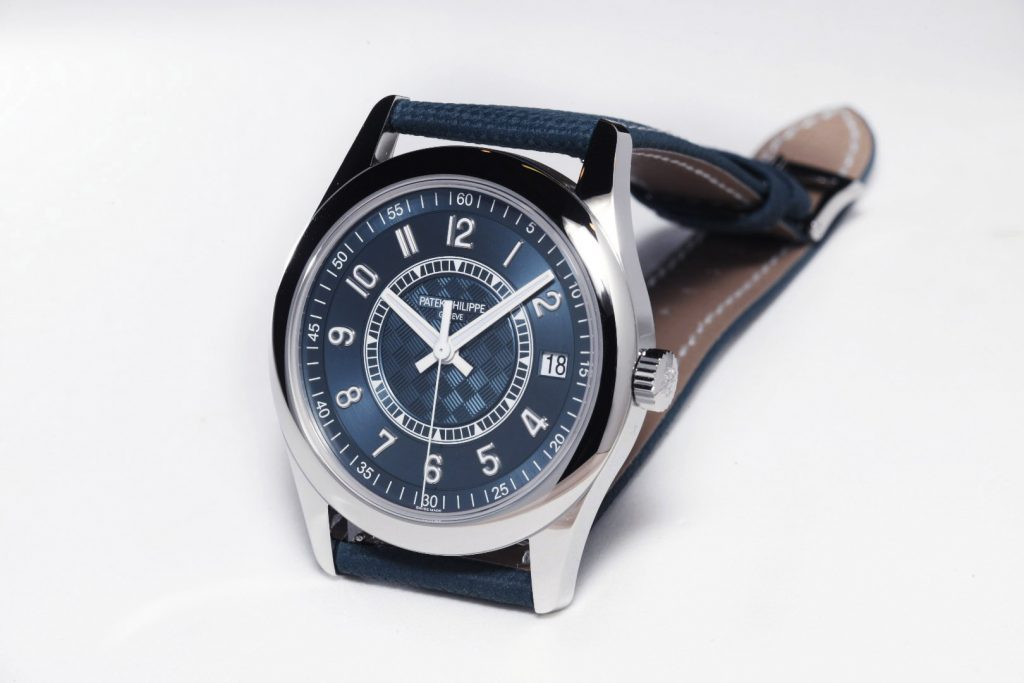 This new watch, the Ref. 6007A-001 comes across as a more modern incarnation of the traditional Patek Philppe Calatrava with a more sports oriented and graphically inspired look. 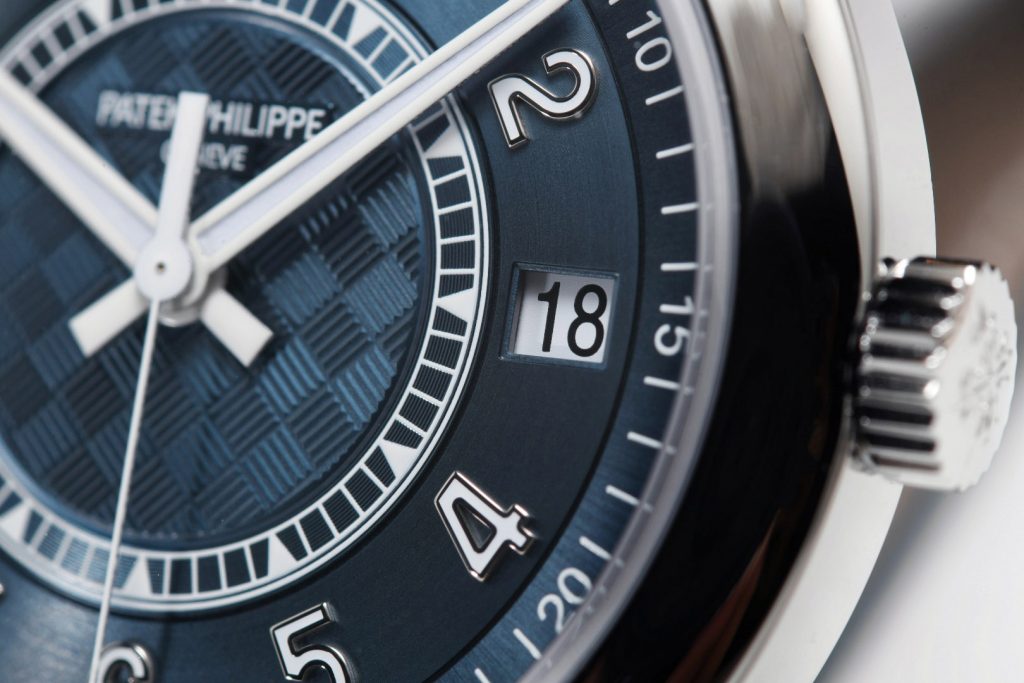 Coming in stainless steel, a popular and relatively rare material for Patek Philippe, the watch is a riot of blue, coming with a blue dial and a blue strap. Yet because the dial comes in a variety of finishes and dial elements, and there is enough visual interest to offset the potential monochromatic presentation if it were simpler. 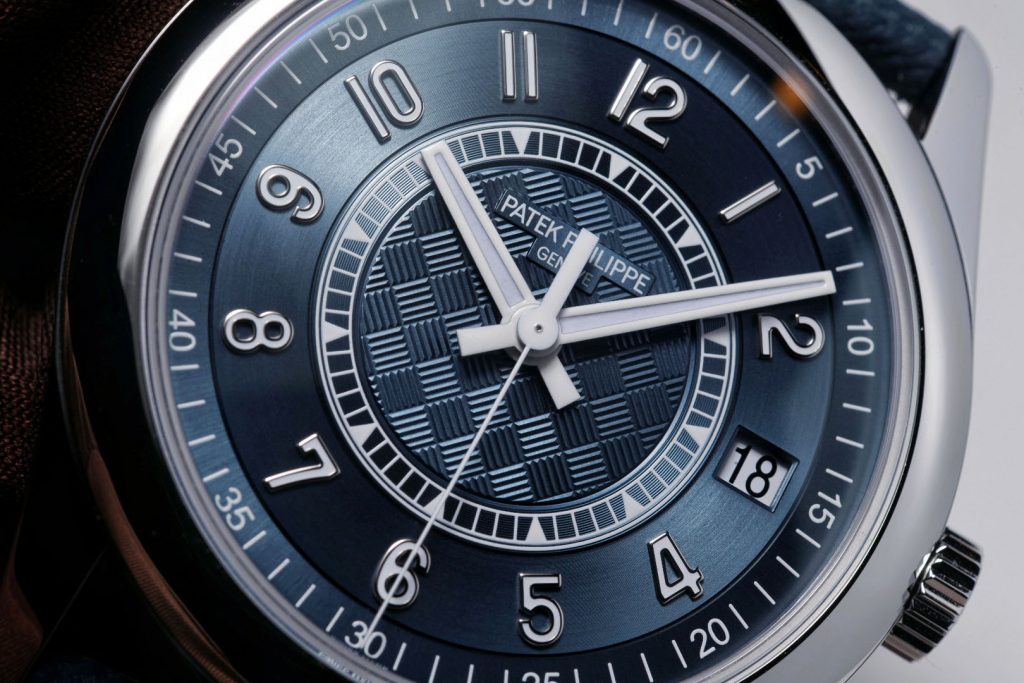 White elements are contrasted against the grey-blue hue of the background, starting with the railway track scale of the hour circle with triangular markers, and the subtle circular satin finish that contrasts visibly against the white dial imprints as well as the applied numerals and the white-lacquered hands in white gold with luminous coatings. 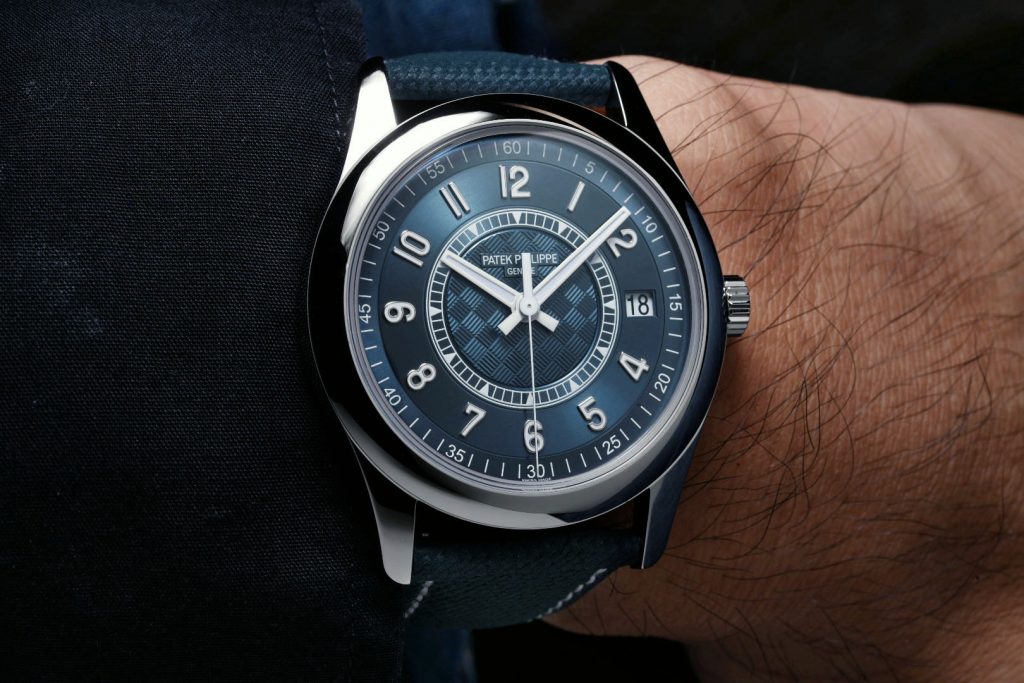 The centre of the dial is interesting since it contains a carbon fibre style texture that Patek Philippe says is “an enigmatic footnote referring to the world of high-tech”, perhaps referring to the innovations that this traditional brand has nonetheless pioneered throughout the history of watchmaking. 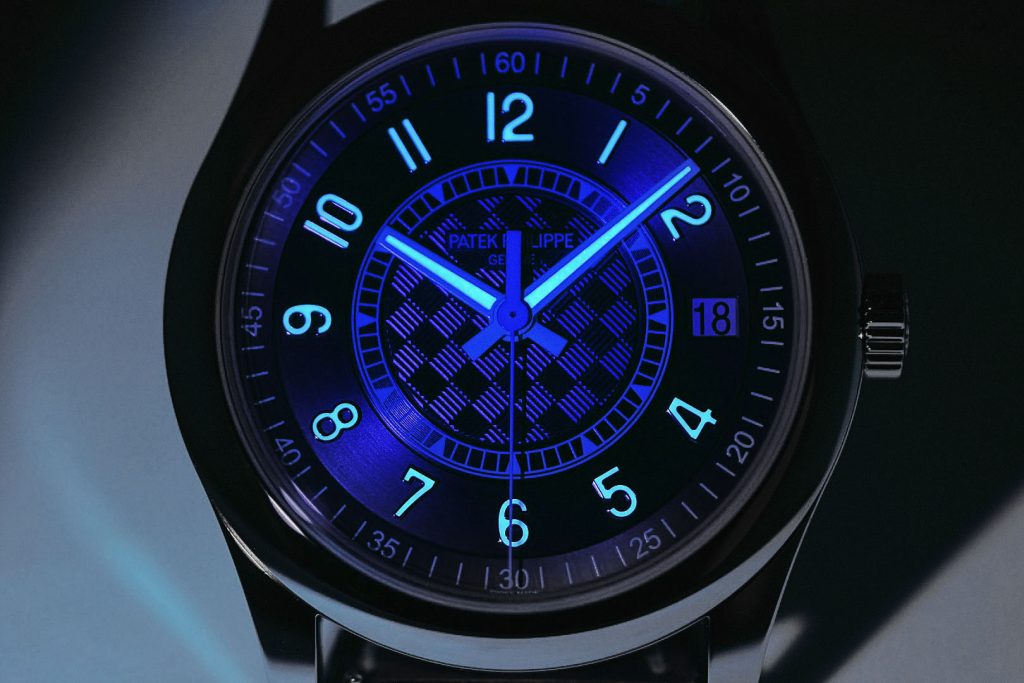 The hands as well, pierced baton hands for the hours and minutes in white with lume, recall the Ref. 6006 Calatrava, make a strong statement that in the light, as well as in the dark. Why? This is Calatrava that can be read in the dark thanks to these hands as well as the lume that fills the applied Arabic numerals. This is a move that definitely further the credentials of the watch as a modern Calatrava made for our current and future generation. 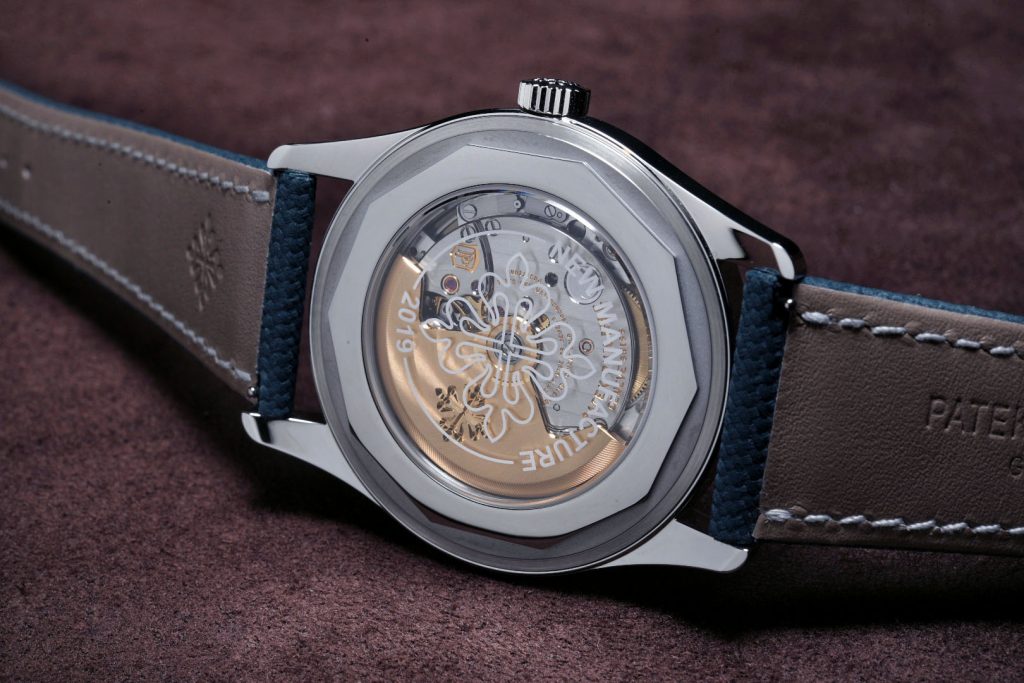 The watch runs the self-winding caliber 324 SC with date, and is visible through the sapphire caseback. This is decorated with the text “New Manufacture” above the Calatrava cross and the year “2019”, when the building was completed. Lastly, a word on the blue strap with white seams. While it might look like textile, it is instead delicately embossed to look that way. It is in fact made of calfskin, and colour coordinated to match the carbon fibre pattern on the dial centre. 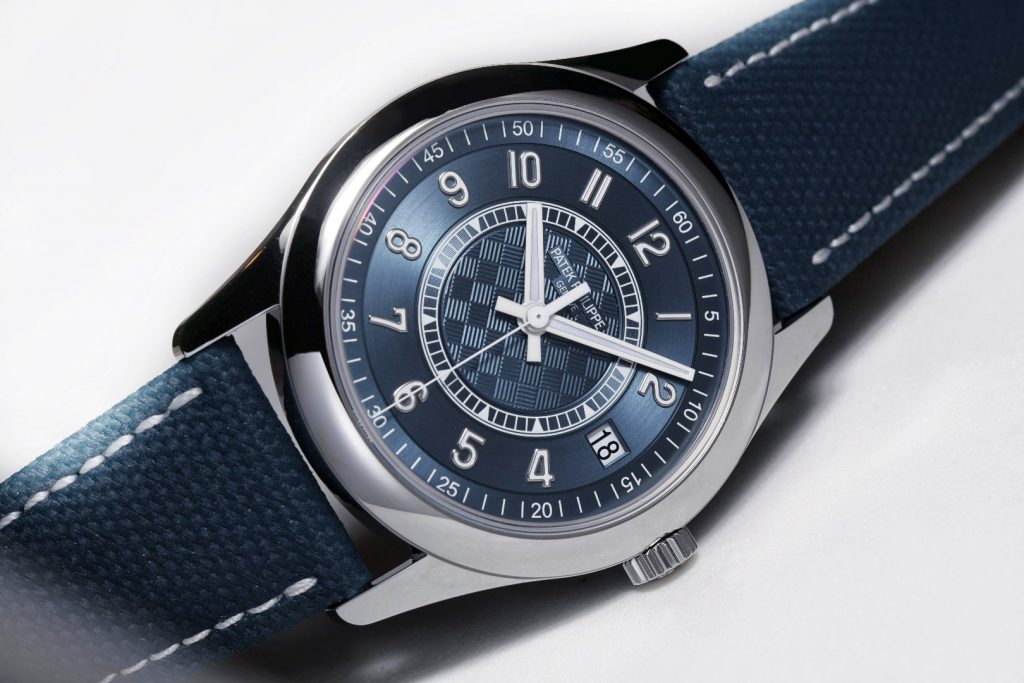