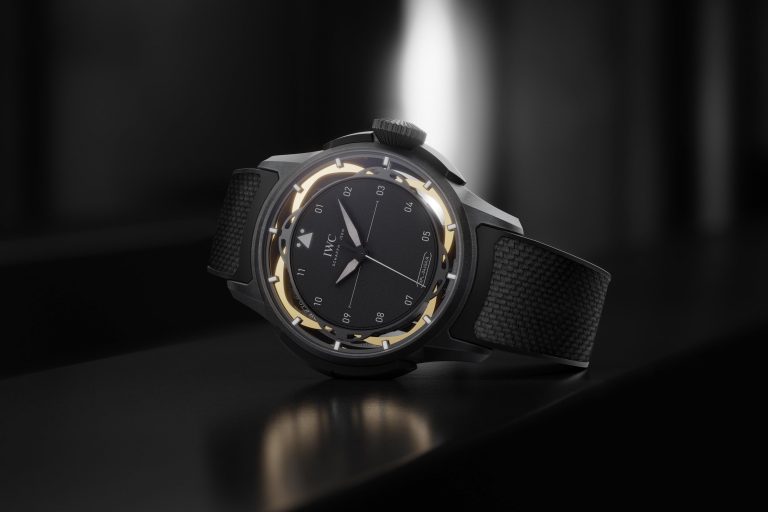 It’s nice when brands hold back something for release only at the start of Watches and Wonders, and unlike the typical IWC that we’d normally expect, this strange surprise that comes out of the blue is the Big Pilot Shock Absorber XPL.

Now let’s start with the strange name of this watch that should already alert you that something different is going on. The “XPL” in the name stands for “experimental” and refers to the Experimental Engineering division, a new part of IWC dedicated to research and development.

Christoph Grainger- Herr, CEO of IWC Schaffhausen, compares this division to Formula 1, in which innovations that arise trickle down over time to normal cars. And so it is the same with their watches, where we’ve already seen innovations like their Ceratanium already coming into the standard production watches of the brand.

The rest of the name refers to what is essentially the raison d’être of the watch, the ability to withstand extreme shocks to the tune of 30,000G.

How it accomplishes this accounts for the strange looking circular ring around the dial of the watch, which is the patented SPRING-g PROTECT system, essentially a cantilever spring made out of BMG or Bulk Metallic Glass. If that sounds familiar, it’s because we’ve seen the same material used by Panerai in some of their cases since 2018.

This spring surrounds the movement, essentially isolating it from shock, allowing the flexibility of movement by 1mm in every direction. It’s the same principle we’ve seen used in other watches before – think Casio G Shock watches, Bremont and their trip-tik cases or the Richard Mille RM 27-04 Tourbillon Rafael Nadal with wire suspension. The difference with the IWC XPL is that the shock resistance level is much higher than any of those, at 30,000G, compared to a more typical 10,000 to 12,000G.

The reason why this technology is being used in a Big Pilot watch comes mainly from the fact that the idea for it arose from conversations with fighter pilots. Where the watches endure G forces that are much higher than normal regularly, and in such environments, an impact within the hard surfaces of the cockpit can easily generate forces of up to 1000G easily.

Despite the fact that the spring takes up a reasonable portion of the dial real estate, the watch itself is only 44mm wide, making it extremely wearable. The IWC-manufactured 32115 calibre used for this watch is different as well, as it is a lightweight version made with aluminium components paired with a tungsten rotor. Rated for 120 hours of power reserve and encased in black matte Ceratanium with a rubber strap on a Ceratanium buckle, it is definitely at the bleeding edge of what the brand is capable of doing.

One extra interesting feature of the watch when it comes to time-setting. When the crown is in, it is essentially decoupled from the movement, allowing the shock protection system to function. When it comes time to set the watch, there is a system that makes the connection to the crown rigid when pulled out, making the operation possible in that instance.

Being a special watch like this freshly pulled from the laboratory, the IWC Big Pilot Shock Absorber XPL will be limited to 30 pieces total, with a production of 10 pieces per year for 3 years. Of course, if this is the type of innovation that IWC will start to bring to their watches, then it’ll be exciting to see what else will emerge from the Experimental Engineering division in the future.