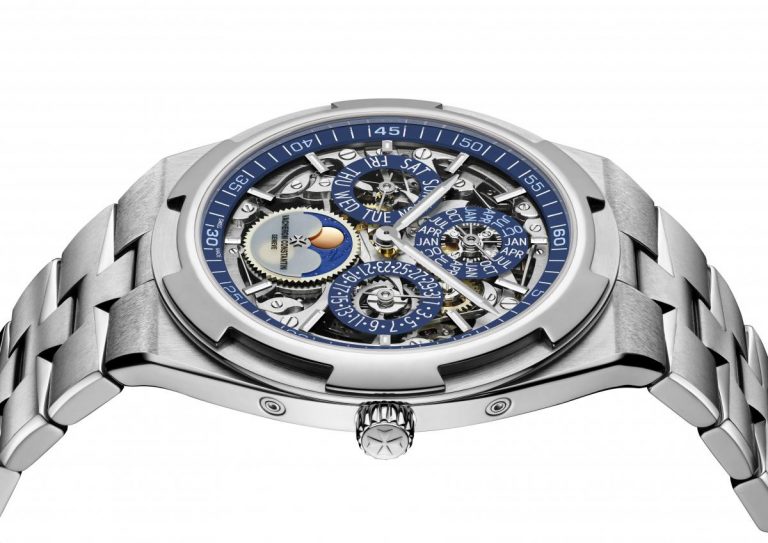 In 2021, Vacheron Constantin celebrates the 100th anniversary of the Historiques American 1921 (linked below), and continues to iterate with new additions to the Overseas and Traditionelle collections, as well as a Metiers d’Art collection that pays tribute to legendary explorers and mariners.

The Overseas Tourbillon sees a new metal addition in the form of a pink gold version that adds an unprecedented level of bling to this model (previously, this model was only available in stainless steel). The tones of gold give the blue dial a warmer feel, and the pink gold case and bracelet adds to the heft and its value.

Housed within the Overseas Tourbillon is the Calibre 2160, beating at a traditional 2.5Hz, but with a modern automatic winding system through a peripheral rotor that enables a better view of the construction of the movement, and the finishing of its components. Included with the watch are two additional straps in blue calf leather with grey stitching and a rubber strap – both of which come with pink gold pin buckles.

The Overseas Perpetual Calendar Ultra Thin for 2021 now sees a “stealth wealth” model in white gold, much like when the new version of the Overseas was revealed in 2016. This new model for 2021 is executed completely in white gold, including its case and bracelet. Sporting an on-trend blue lacquered dial, the model is cool and restrained, exuding effortless style. Housed within the Overseas Perpetual Calendar Ultra Thin is the Calibre 1120 QP/1 with 48 month date display, utilising the famed JLC base 920 movement originally used by the Holy Trinity in the early days of the luxury sports watch. As with all Overseas models, this comes with two straps, rubber and calf, with a pin buckle matching the case and bracelet of the watch.

The Overseas Perpetual Calendar Ultra Thin Skeleton is now available in white gold with a blue dial, and will be a boutique exclusive. Its dial is made of sapphire crystal, in order to expose the openworked movement within. This movement is the same as the Perpetual Calendar Ultra Thin, except for the fact that it is skeletonised, and given a NAC treatment to darken the bridges and plates of the movement. The gold tones of the calendar wheels give this model visual points of interest, and draw the viewer closer to the watch, to inspect the finely finished levers, springs, plates and bridges of the openworked movement. This watch also uses a version of the famed JLC Cal. 920, albeit masterfully skeletonised by Vacheron Constantin. Like all the Overseas watches released this year, it comes with two additional straps with buckles that match the case – textured rubber and calf leather.

The new Traditionelle collection was created to further the pursuit of watchmaking excellence, and in 2021, this is no exception, with the unveiling of the Traditionelle Split Second Chronograph. This watch has been given the “Excellence Platine” treatment, with its case, dial, buckle and the stitching of the strap executed in 950 Platinum. Timekeeping functions like the hour, minute, running seconds hands and the hour markers are furnished in white gold, whilst the split chronograph hands, minute totaliser, and the power reserve hand are in blued steel.

Housed within the 42.5mm 950 Platinum case is the in-house Calibre 3500 – this calibre was specifically made for the 260th Anniversary in 2015, making its debut in the Harmony collection. The movement features a monopusher chronograph with split seconds function – no mean feat for a watch brand to create. The watch is delivered on an alligator strap, and is limited to 15 pieces worldwide.

This curious collection pays tribute to the great explorers from Portugal who encountered various landmasses during their journeys, as well as a continuation of the Great Explorers series from the early 2000s. A true display of watchmaking art, the dials are two pieces crafted in beige Grand Feu Enamel, and feature miniature paintings of the countries particular to that explorer.

The paintings themselves are inspired by the ancient nautical charts of the Miller Atlas from 16th Century Portugal, of which a reproduction is on display in the Maritime Museum of Lisbon. Each watch features a segment of the atlas that was discovered by these explorers – the dial featuring Africa is in tribute to Bartolomeu Dias, who encountered South Africa, the dial featuring the Eastern part of Africa and India honours Vasco Da Gama, and the dial featuring Brazil commemorates Pedro Alvares Cabral.

The countries are outlined in gold powder, and the details are painstakingly hand painted. Executed in 4N pink gold, that has a less red hue than most pink golds, they house the automatic winding Calibre 1120 AT, with rotating satellites for the hour that tell the time by proximity to the minutes to the right of the dial. All three of these watches will be boutique exclusive, and are limited to 10 pieces each.

These new releases for Vacheron Constantin represent a fresh take on some existing models, breathing new life into them, whilst introducing new variants that should appeal to a wide clientele base, renewing interest in the world of Vacheron Constantin